“Messengers are big fixie aficionados, but more and more fixed-gear bikes are being ridden by nonmessengers, most conspicuously the kind of younger people to whom the term “hipster” applies and who emanate from certain neighborhoods in Brooklyn.”

According to our data, Manhattan is actually more hipster than Brooklyn. Short of surveying the snugness of men’s pants in each borough, it’s not an easy assertion to quantify.

That’s where the Fixie Bike Index comes in. At Priceonomics, in order to build our bicycle price guide, we measure what kind of used bikes people are trying to sell and the quantity sold in any city. By mining our database of 1.3 million bicycle listings, we can tell what are the largest markets for used bicycles, how the prices vary by region, and where people who prize fixed gear bikes live.

Fixies (fixed gear bikes) are considered to be a strong indicator of hipsterness. For those unfamiliar, a fixed gear bike requires riding in a single gear and the only way to stop the bike is to pedal backwards to help skid the bike to a halt. You can’t “coast” on a fixie; when you are biking downhill, your pedals will keep moving so you better keep pedaling too. Because of the minimalism of this fixed gear system, the bikes tend to be aesthetically pleasing but somewhat challenging to ride. This enigmatic combination may be what draws hipsters to the bikes, or not. 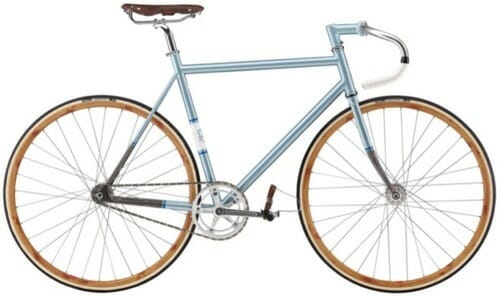 In short, fixed gear bikes = hipsters, and New York boroughs that have more fixies per capita should have more hipsters per capita. We sampled our data to see the number of used bikes for sale per capita in each borough with the term “fixie” or “fixed gear” in the product title to create the Fixie Index. 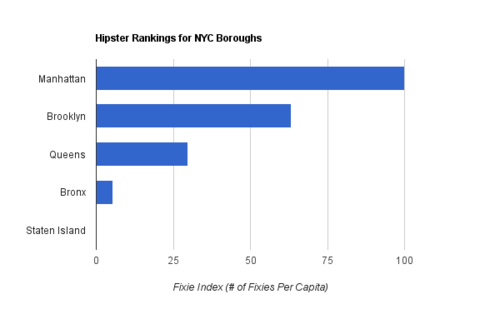 To our surprise, fixies are nearly twice as popular in Manhattan than Brooklyn! Moreover, Manhattan is almost 20x more hipsters than the Bronx, and infinitely more so than Staten Island. One might argue that maybe bikes in general are just more popular in Manhattan than Brooklyn, and that’s why there are more fixies per capita there. In fact, the opposite is true. There are more bikes offered for sale in Brooklyn than Manhattan, but only 8.3% of them are fixies versus 9.5% in Manhattan. Of course, if you drilled down by neighborhood you could get a more nuanced picture, but sweeping generalizations are more fun!

The National Fixie Index – Ranking the Most Hipster Places in America

Next, we apply this methodology on a national scale. Which cities are most hipster based on their affinity for fixed gear bikes?

Before we ran the numbers, we were pretty sure the answer would be Portland. San Franciscans (which we are) take a particular delight in being weird, but not being quite as weird as the people from Portland. This seemed like a great opportunity to point out “hey we like these impractical but cool bikes in San Francisco, but we haven’t taken it too far like those misguided folks out in Portland.”

Unfortunately the data did not comply with our desire to tease the people of Portland. In fact, we were shocked to learn that Southern California is the epicenter of the fixie community and that San Francisco is the fourth most popular area for fixed gear bikes. By the fixie metric, it appears that Portland is about as hipster as khaki pants and a blue button down. 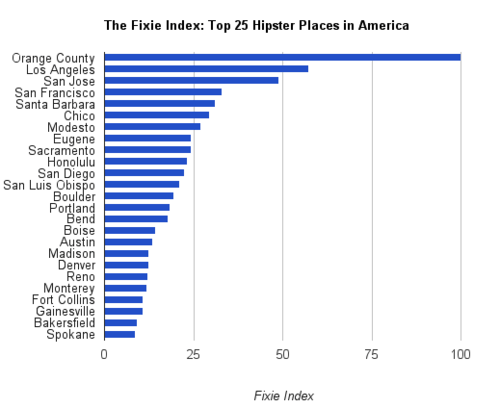 Southern California also tends to refer to these bikes as “fixies” while the rest of the country tends to use the less silly term “fixed gear bike” instead. Are Orange County and Manhattan actually bastions of hipsterdom? If not, perhaps it’s time to reevaluate whether fixie-affinity should be part of the hipster stereotype.

The Top Cities for Bicycling in America

Of course, we can look at the Priceonomics bicycle data more broadly to find out where lots of used bicycles are sold.  Our central assumption is that cities with large and vibrant secondhand markets should be the ones where many people are bicycling enthusiasts. While this assumption is not perfect, it’s better than most rankings of “bike friendly cities” where the rankings are just made up.

First, we look at raw volume of bicycles offered for sale by city to determine which are the largest markets. Obviously, this is biased toward larger cities where the average citizen may only have a lukewarm interest in biking. 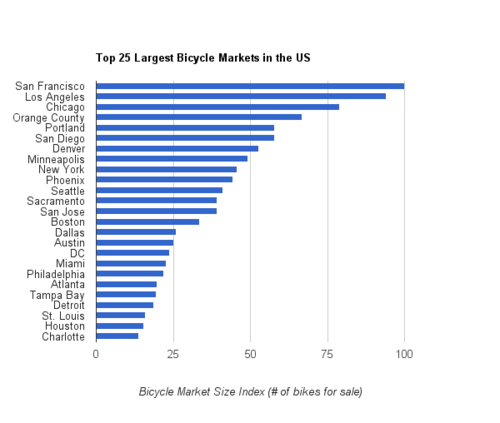 It’s very pleasing to this author that San Francisco comes in first in this ranking and beats Portland handily. However, the above analysis does not control for population and the Bay Area is much larger than the Portland metropolitan area. Instead, to build the official Priceonomics Rankings of Top Cities for Bicycling, we adjust for population to build an index of how many bikes per capita are for sale in each city (the Bike Index). 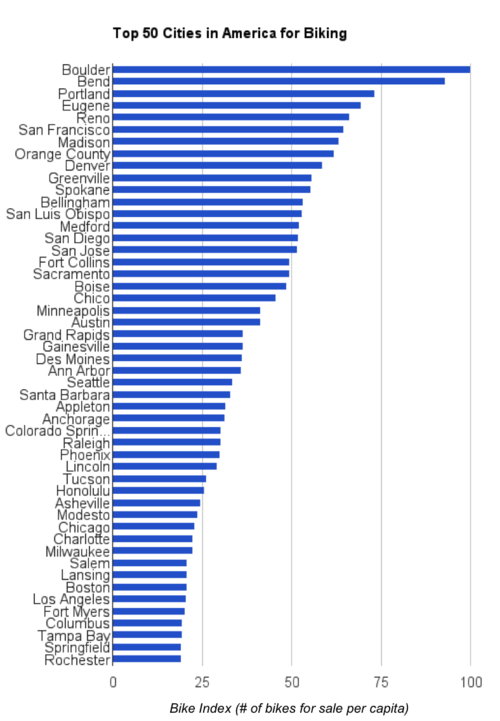 And the winner of the Top City in America for Bicycling is Boulder, Colorado! With its bike friendly road infrastructure, population of college students and nearby mountains, Boulder comes in first for the win. Rounding out the rest of the top four are a trio of Oregon Cities: Bend, Portland, and Eugene. Other observations:

Predicting Why Some Cities are Popular for Bicycling

So far, our data has shown there are tremendous differences in cities across America in terms of the size of the bicycle markets.  But why? What causes some cities to have large markets for bicycles and others practically non existing ones. Is it something about the layout of the cities, the people in the cities, the government, or the culture?

At first we were convinced that 100% of the variance in bike market size could be explained by the population density of a city. If you live an a densely populated area like San Francisco, bicycling is an efficient way to get around the city. If you live in Los Angeles, getting on a bicycle can’t really get you anywhere. To our surprise, population density has a nearly zero correlation with our bicycle index. If anything, it very weakly suggests the more densely populated the city, the less prevalence of biking. 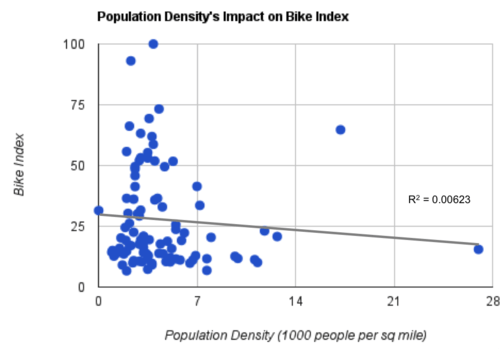 Cities like Cleveland, Las Vegas and Detroit are are just as dense as Portland, yet their bicycle markets are nearly non existent. What gives?

Next we looked at Education as a predictor of bike market size. We examined the percentage of the population with a college education and how that correlated with the size of the bike market. Education does have a significant positive effect on the size of the bike market. However, it only explains a small amount of the variation we see in bike market size and it’s hard to disentangle what’s really at play here since education usually goes hand in hand with income, age, and the decision where to live. 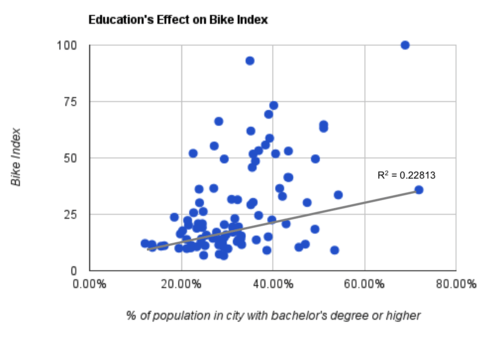 Looking at the cities with very small bicycle markets, some stood out as being cities that the media frequently sites as being in decline  (Detroit, New Orleans, etc).  Are cities either busy biking or busy dying? Possibly, but it’s hard to tell. 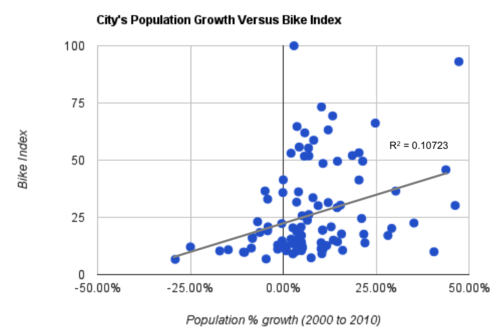 Growing, well-educated cities tend to have more developed bicycle markets, but our data was unable to completely explain what drives a city to take up biking. Perhaps a liberal arts major would suggest the answer is “culture” or “government policies” and we might be inclined to agree.

The People of Portland are not Actually Bike Snobs

Our final analysis was to examine the median prices of a used bike in each city. Surely, the people of Portland are all riding carbon fiber cruisers or classic italian touring bikes or something imprudently expensive. Freakonomics went so far as accuse Portland of “bike inflation” which is a serious allegation from an economist.

Freakonomics was wrong. The people of Portland just ride regular ole bikes that don’t cost more than any other place in America. In fact Salt Lake City, UT and Asheville, NC lead the charge as being the most expensive used bike markets in America. 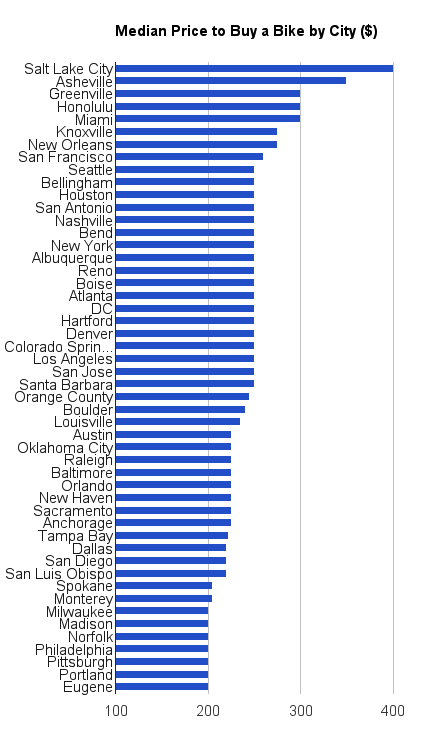 Are these cities more expensive because people buy expensive bikes here or just because prices of comparable bikes are inflated? That’s a topic for another post.

Despite our best efforts to paint Portland as a bunch of hipster bike snobs, the data simply does not support such a conclusion. The people of Portland just seem to really like bicycles, but not ones that are particularly expensive or difficult to pedal up hills. The same goes for the denizens of Brooklyn, who aren’t the fixie-fanatics they’re made out to be. It seems that  American cities that are growing and highly educated tend to have thriving bicycle communities. Perhaps it is because these cities fill its inhabitants with a sense of adventure and optimism to try alternative forms of transportation. Or perhaps in these cities, parking is a pain in the ass.

Credit to Paul Graham for coming up with the idea of the Fixie Index.