The Golden Age of Poultry

US Meat Consumption, Pounds Per Person For the first time in over a hundred years, we eat more chicken than beef.

Many different factors are possibly in play here. For one thing, a head of beef has always been relatively pricey compared to other forms of meat. Over the past 20 years, beef prices have risen drastically versus broiler (chicken) and pork. The rising costs of beef coincide with the decreasing total inventory of calf and cattle in America, which hit a 60-year low last year. The CME Daily Livestock Report places the blame on rising oil and grain prices, as well as on NGOs that oppose meat consumption.

While this may be true, the energy requirement to produce 1 kg of beef is inherently higher than what is needed for 1 kg of chicken: 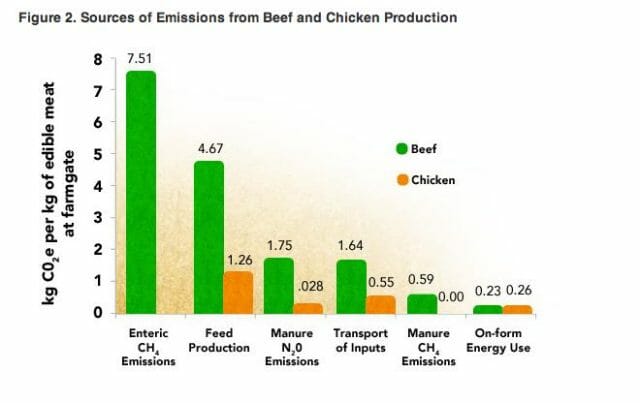 The rise of chicken can also be attributed to its versatility; beef generally takes longer than chicken to prepare. So not only is chicken easier to cook, but it’s also cheaper to buy and to produce than its heftier meat relative.

Chicken is also a white meat, which many people characterize as leaner than red meat. Red meat is claimed to be linked to higher cancer and heart disease risks. Red meat’s stigma can’t help but play to chicken’s advantage.

We are enjoying a golden age for poultry. Which probably doesn’t bode well for your neighborhood chicken.