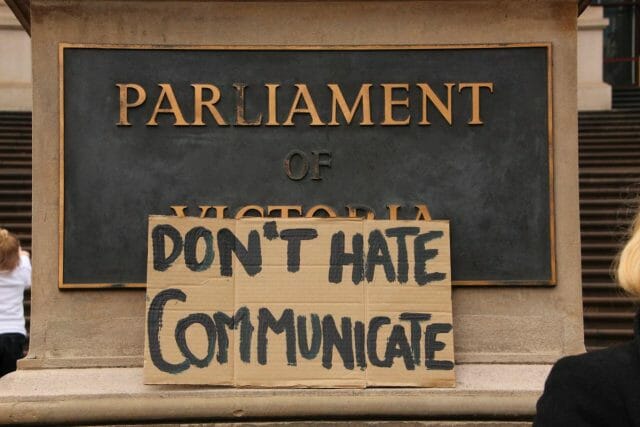 A couple days ago, the state of New Jersey announced its controversial ban on all sales of Tesla cars because the company sells directly to consumers instead of using car dealerships. This was an odd move, because there is plenty of evidence that car dealerships are bad for consumers, but who exactly does it hurt to let consumers purchase cars directly from the manufacturers?

Well, it only really hurts car dealers, who happen to wield a lot of political influence and are sometimes important boosters of the local football team: 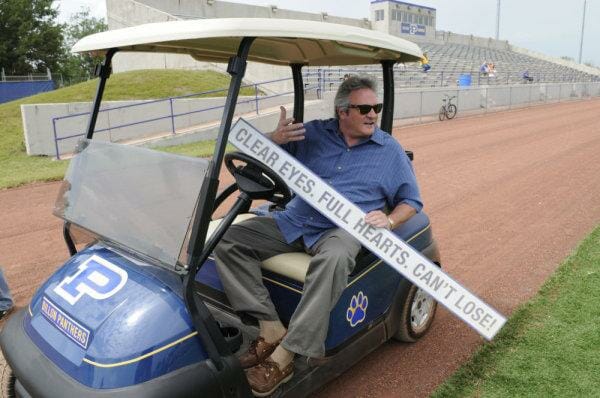 But we digress (obviously). Soon after the Tesla announcement, Paul Graham of Y Combinator tweeted out:

“Banning Tesla is an index of the corruptness of state governments as banning Uber is of city governments.”

Here, the theory is that if a government fights new ideas that generally benefit consumers, that’s an indication of bad stuff. Perhaps the government is merely inept, or maybe it’s in the pocket of the vested interests of the status quo?

So, we thought we’d put together some of the data about where governments are fighting new services that consumers generally like: Tesla, Uber, and Airbnb. By Graham’s theory, they provide insight into the corruptness of various locales in the US.

Parsing short phrases by Paul Graham is a cottage industry in the media and among Y Combinator startups he gives advice to. It’s worth noting that Paul Graham didn’t use the word “corruption”, (greased palm bribes and shady backroom deals). Instead, he used the word “corruptness,” which means “a sinking to a state of low moral standards and behavior”.

(Even if you disagree with Graham about regulation of services like Uber and don’t believe that these laws indicate corruptness, we still think it’s an interesting list to have on hand.)

Our analysis starts with Tesla, whose direct-sales model (which bypasses dealerships) has raised quite a ruckus. There are currently 5 states that have banned all sales of the electric car1: 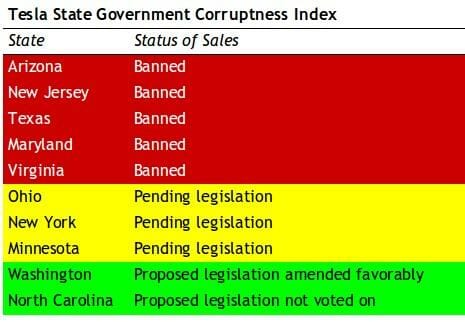 Strangely enough, in Texas, Maryland, and Virginia, Tesla is allowed to show their cars (and in MD even let people test drive them), but the company isn’t allowed to make sales. The other states on this list have either already resolved the issue or are currently finalizing new legislation.

While Tesla’s legal woes are pretty recent, the rideshare service Uber has been dealing with lawsuits from the taxi industry for several years. A handful of major cities that now embrace Uber had once banned them. There is still a spate of forthcoming legislation, and some cities still make it difficult for Uber to set up shop: 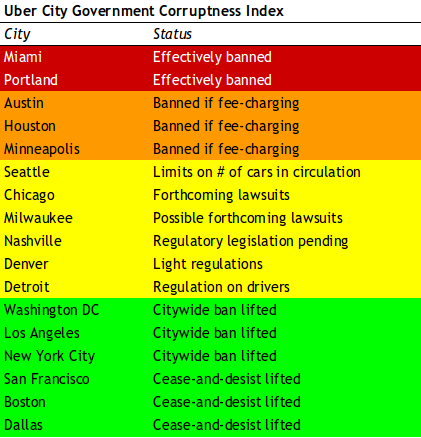 Uber has yet to expand to Miami, under whose laws the company counts as a limo service (which could mean a minimum fare of $80). But in other cities, like Austin, Uber is pretty popular even though it’s not technically legal. The Austin Police Department has been warning SXSW attendees to avoid “unpermitted ground transportation” services like Uber.

Moving from Uber to the apartment sharing marketplace Airbnb, we still see governments struggling to respond. Who knew renting out your bedroom could be so problematic? Almost every major city in America is currently figuring out a way to deal with the home-hotel distinction. Notably, New York City has made it illegal to rent out a room/apartment for under 30 days if the tenant isn’t present: 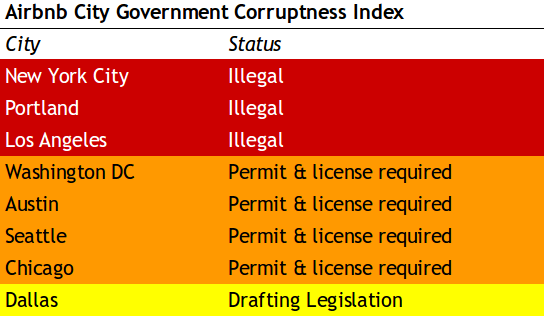 Portland and Los Angeles have also deemed these “short-term stays” via Airbnb illegal. Other cities like DC and Seattle now require Airbnb-ers to get a zoning permit and business license to rent out their cribs.

There are a lot of very popular cities and states in our indices, which speaks poorly to the level of corruptness in American government in general. Of course, the case of Tesla, Uber, and Airbnb might just point to one of life’s inevitabilities (other than death and taxes, of course) — innovation outpaces laws.

As always, we will try to keep everything above updated. So if you see any mistakes or omissions, let us know in the comments. Here are our sources:

1Tesla did not win in Washington and North Carolina courts. Rather, the proposed bans failed to move through state legislatures. We changed the language to reflect the difference.