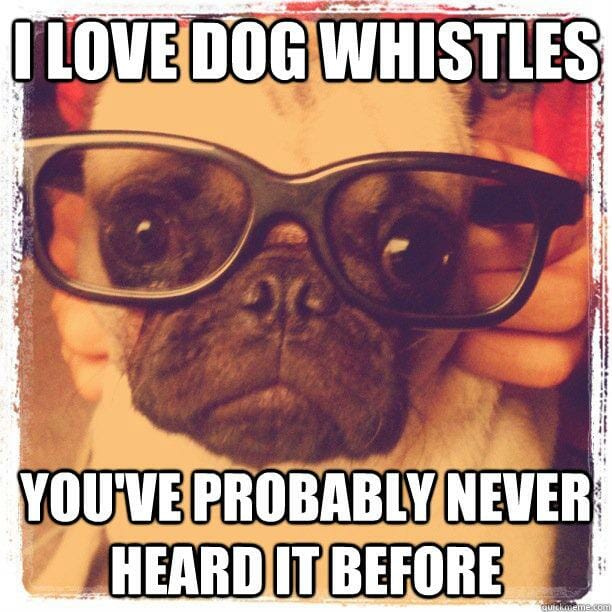 One of the most humorous generalizations about hipsters is that they like things simply because they are obscure. According to this line of mockery, hipsters eschew mainstream movies, music, and literature because they are popular, regardless of their actual quality. Even the Wikipedia page for Hipsters piles it on, quoting an article from Time:

Hipsters are the friends who sneer when you cop to liking Coldplay. They’re the people who wear t-shirts silk-screened with quotes from movies you’ve never heard of…

Since Priceonomics is a team of bike-riding, IPA-sipping, vinyl-listening, Mission-living hipsters, we thought we’d continue our exploration of using data to shed light on the hipster condition. In our last installment, we looked at where in America fixed gear bikes are most popular to assess which cities are most hipster. Now we turn to music.

So, what kind of music can hipsters listen to? Clearly Coldplay isn’t an option, so we can rule that out, even though Yellow is a pretty excellent song.

We decided to apply our data capabilities to answer this important question. We used two criteria to judge whether a musician was hipster. The first was if the musician received a positive review from the music review site Pitchfork, a highly influential website dedicated to reviewing “independent” music. TV Tropes, some sort of meme site we encountered merely by Googling the terms “Pitchfork” and “hipster” together, describes the site’s influence:

Pitchfork Media, a music blog, is probably the most important hipster taste-maker.

So, the first scientific criterion for identifying a hipster band is that Pitchfork likes them. Pitchfork reviewers like a lot of mainstream music, however, so that’s not enough. The second criterion is that not many people should like that band. The music must be obscure so that people can say, “My favorite band is X, you’ve probably never heard of them.”

To measure obscurity, we looked at the number of Facebook likes the Pitchfork review received. All else being equal, we expected a hipster band to get fewer Facebook shares than a non-hipster band with the same score.

Pitchfork has a “best new albums” section where we analyzed all albums in that section for 2013-2014. Specifically, we examined the score that Pitchfork gave the band’s latest album (they use a 0-10 scale) and the number of Facebook shares the review got and plotted them below. 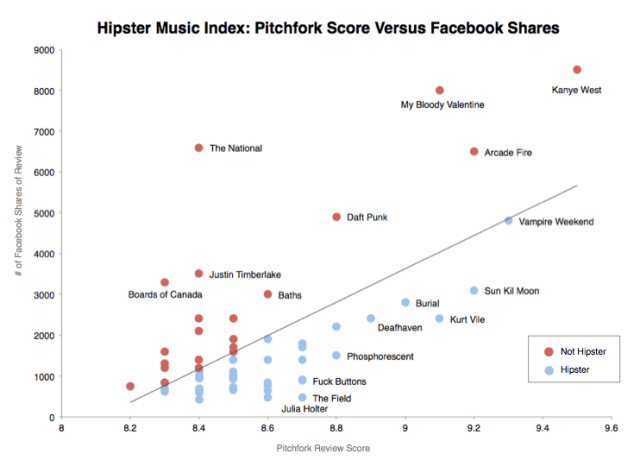 For a given Pitchfork Review Score, the trend line uses a linear regression to predict how many Facebook likes you’d expect the album to receive given its critical acclaim.

By our criteria, the further below the line a blue dot is, the more hipster the band. (It’s high quality but obscure.) Dots above the line represent more mainstream (not hipster) bands.

The model appears adept at separating critically acclaimed but mainstream bands (Arcade Fire, The National, et al) from the critically acclaimed but obscure (Fuck Buttons, Sun Kil Moon, et al). We gave Sun Kil Moon’s last album a listen, and not only was it excellent, but it was filled with depressing lines like “Carissa was thirty-five, you don’t just raise two kids and take out your trash and die,” which make it unlikely it will ever become a mainstream hit!

Here are the top 25 most hipster bands according to our methodology. These bands have albums that are critically acclaimed by Pitchfork, but aren’t widely shared. So it’s okay for hipsters to like them. 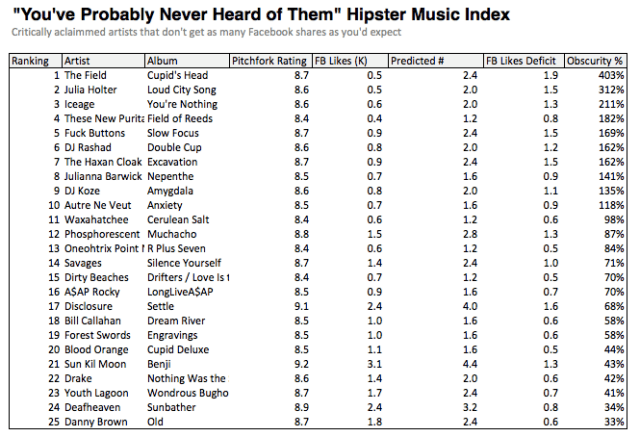 Next, we present twenty bands that might seem hipster because Pitchfork loves them, but aren’t obscure enough because they’re widely shared on Facebook as well. It’s probably not very hipster to profess that you like them. 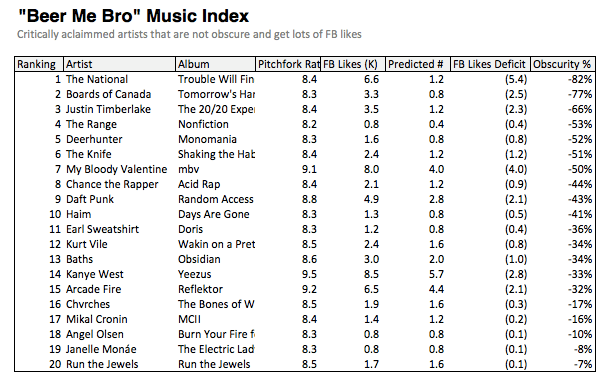 In summary, we did a very important and scientific analysis about what kind of music is hipster-approved. Sun Kil Moon, Fuck Buttons, The Field, and Julia Holter made the cut. Unfortunately, Daft Punk, My Bloody Valentine, and Arcade Fire did not.

The analysis was inconclusive; however, one very important question remains for hipsters: Is it okay to like Vampire Weekend?