The Invention of Pad Thai By coup-plotting standards, Plaek Phibunsongkhram was in a good position.

The year was 1938. Six years earlier, Phibunsongkhram, better known as Phibun in Western historical accounts, had played a prominent role as a military officer in a coup that stripped Thailand’s monarchy of its absolute powers. A year later, he became the equivalent of the Minister of Defense after crushing a rebellion launched by royalists, and in 1938, he became prime minister.

Yet Phibun worried as he assumed power. Thailand, which was then known as Siam, had never been colonized, but it was surrounded by French and British colonies. Siam was also an ethnically diverse country with strong regional identities, and Phibun had wrested power from the monarchy, the institution that had long held it all together.

Worried about his country’s independence, disintegration, and, most of all, support for his rule, Phibun decided to transform the country’s culture and identity. The European-educated Phibun saw his country as provincial and backward; he aimed to make Siam a strong, nationalistic, and modern country.

Like a drill sergeant breaking in new recruits, Phibun passed 12 Cultural Mandates that exhorted the Siamese people to be productive, well-mannered, and proud of their country.

Some of Phibun’s mandates—like his desire for everyone to wear hats in public—are now footnotes in history. Other edicts—like his decision to change the name of the country to Thailand—stood the test of time. And one changed culinary history, even if few people know it.

As part of his campaign, Phibun ordered the creation of a new national dish: pad Thai.

Pad Thai is not a foreign creation like General Tso’s chicken. “Whenever we try Thai food,” chef and Thailand native Nick Srisawat tells Gastronomica, “we try pad Thai first, because that is a way to judge how good a restaurant is.” Pad Thai is a staple of Bangkok street food and sold in small, Thai villages.

Seventy-five years ago, when Phibun decided to redesign Thailand’s culture by decree, pad Thai barely existed—if it existed at all. Rice with chili paste, leaves, and salt was the staple, subsistence food, and Thais bought lunch and snacks from Chinese food vendors.

The exact origins of pad Thai remain contested. According to some accounts, Phibun announced a competition to create a new, national dish. Phibun’s son, however, told Gastronomica that his family cooked the dish before Phibun made it government policy, although he does not remember who invented it.

Either way, the dish’s roots are Chinese. Its full name is kway teow phat Thai. Kway teow means rice noodles in a Chinese dialect, and the entire name means stir-fried rice noodles Thai-style. Noodles and stir-frying are very Chinese, and immigration likely brought the practice to Siam. Flavors like tamarind, palm sugar, and chilies were the Thai twists. 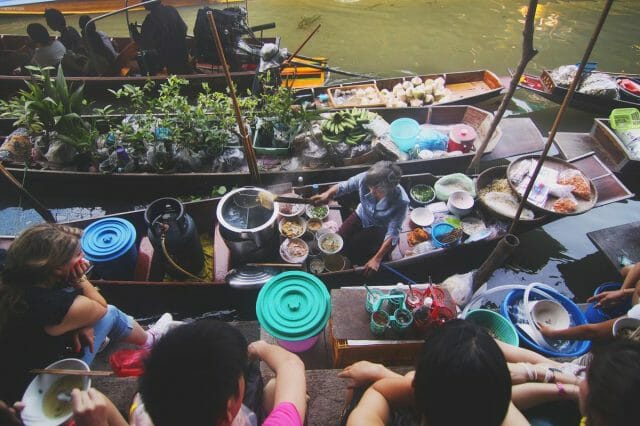 By releasing a pad Thai recipe and promoting it, Phibun turned one potential take on stir-fried noodles into a national dish. He believed that pad Thai would improve the diet of people who ate mostly rice, and that cooking pad Thai in clean pans would improve national hygiene.

Most of all, Phibun wanted to unify the country by promoting a uniquely Thai dish. Despite its Chinese origins, pad Thai stood out from the wet or dry noodle dishes sold by Chinese vendors. It was, as Penny Van Esterik writes in Materializing Thailand, “part of Phibun’s nation-building strategy to develop ‘Thai-ness’ and impose a ‘Thai Great Tradition.’”

It may seem strange today that a politician could mandate the country’s most popular dish. But when Phibun decided to promote pad Thai, his efforts looked nothing like Michelle Obama appearing with Sesame Street characters to encourage kids to eat vegetables.

The promotion of pad Thai was the work of a military dictator who survived multiple coups and World War II—and believed that his political future and his country’s future were at stake.

Why Culture Mattered (To A Dictator)

When Phubin became prime minister, Siam remained the only area in southeast Asia that had not been colonized by European powers. He believed that the effort of Siam’s kings to portray Siam as a cultured and modern country was responsible for its independence.

Europeans justified colonialism by calling it a “civilizing mission” to help backward natives. This made culture as powerful a deterrent as force of arms. When Western diplomats visited in the 19th century, Siam’s kings treated them to dance performances “intended to impress foreign visitors with… the authority, legitimacy, and power of the Siamese court.”

Phubin’s Cultural Mandates continued the work of Siamese kings who sought to unify and modernize the country to show Europeans that Siam was also a great power. “In an effort to build a nation with a firm and everlasting foundation,” Phibun said in a public address in 1941, “the government is forced to reform and reconstruct the various aspects of society, especially its culture.”

Under Phibun, Thailand’s government coined a new word for culture that combined the words for progress and morality. In a cabinet meeting, Phibun explained the importance of his cultural campaign:

“We must be as cultured as other nations otherwise no country will come to contact us. Or if they come, they come as superiors. Thailand would be helpless and soon become colonised. But if we were highly cultured, we would be able to uphold our integrity, independence, and keep everything to ourselves.”

Most of Phibun’s strategies for forging a common, modern identity were more direct—and often more coercive—than promoting a national dish. The government reformed and standardized the Thai language and banned other languages and dialects from schools. It closed the Islamic courts of Thailand’s Malay minority and reserved positions for ethnic Thais in industries dominated by the Chinese. It reformed school curriculums to highlight the continuity and shared history of Thailand.

Phibun’s pronouncements also carried the weight of a leader who dominated his country. As World War II approached, the fascism of Hitler and Mussolini held appeal, especially to a young military leader. Ba Maw, who led Burma at the time, described the spell of Axis countries over the East as “almost hypnotic.” People loved the idea of a “shining charismatic leader who would save his people.”

At times, Phibun played the democrat. But he borrowed liberally from the fascist playbook to create a state-centric culture led by his own cult of personality. The government placed portraits of Phibun across the country, and state media fawningly quoted him every day. Phibun’s birthday became a national holiday and people called him “The Leader.” Plays backed by the state depicted Thai military heroes and lionized sacrifice for the state, and the government organized militaristic youth groups that were more Hitler Youth than Boy Scouts.

The effect was to make Phibun’s cultural campaign less of a front in a culture war than pronouncements from a leader to a waiting populace—less a suggestion by FDR than a proclamation from Mao Zedong.

From a historical distance, many of Phibun’s pronouncements and policies seem comical. He told people to wear European trousers and skirts instead of traditional Thai clothes. He ordered everyone to wear hats in public and to stop chewing betel nuts. He advised people how long to sleep each night and how often to call their relatives. “Thai culture poster” by Government of Thailand. The left side shows discouraged, traditional clothing and the right side shows the mandated Western clothing.

Yet Phibun took each and every part of his cultural campaign seriously. The National Cultural Act listed penalties for violating its edicts. Even as World War II began, he used a radio address to tell Thais, “Our dear ladies must not think that it is not necessary to wear hats in times of war. Now more than ever is it essential to go on wearing hats.”

Phibun apparently took the adoption of pad Thai equally seriously—or perhaps he simply saw it as a pet project. Either way, he devoted significant resources to its promotion. The Public Welfare Department distributed recipes and a great number of carts for selling pad Thai, while Phibun banned Chinese and other foreign food vendors as part of his “Buy Thai” campaign. Propagandists launched a campaign with the slogan “Noodle is your lunch.”

As pad Thai became the country’s most popular dish, Thamsook Numnonda writes in the Journal of Southeast Asian Studies, Plaek Phibunsongkhram, a prime minister deciding whether to side with the Japanese against the Allies in World War II, “closely followed the progress of the noodle project.”

For a simple noodle dish, pad Thai has a beguiling history. Yet some historic precedents suggest that its story is not entirely unique.

Although he did not invent kebabs, Mustafa Kemal Atatürk earned the title “father of modern Turkey” for modernizing his country during the years leading up to World War II. Like Phibun, he believed catching up with Europe required not only adopting its technology and managerial strategies, but its clothes, architecture, and customs.

As for food, history is full of examples of seemingly quintessential dishes with short histories. When we think of Italian food, we think of pizza and spaghetti. Yet tomatoes are not native to Italy and only reached Europe after conquistadors brought them back from South America.

No food is more Irish than potatoes. Except that when potatoes first reached Britain, people thought that they, like all roots, were only fit for animals. “The poor of Europe,” Rachel Laudan, author of Cuisine and Empire, has said, “had to be bludgeoned into adopting the potato in the 17th and 18th century.”

“How long does it take to create a cuisine?” writes Laudan. “Not long: less than fifty years, judging by past experience.”

Cuisines are less rooted in place than our obsession with “authentic” dishes would suggest. Food does not reflect an authentic past so much as who we have recently chosen—or been forced—to be.

Our next post explores the life of “Stagecoach” Mary Fields, a former slave who became one of the most feared and respected characters in the Wild West.