The Linguistics of Writing an Email Like a Boss 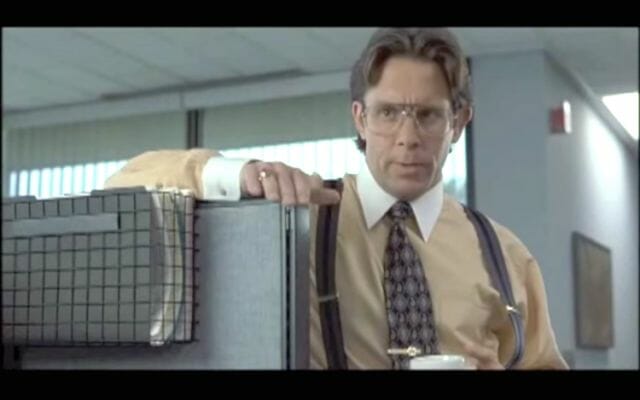 …So, if you could do that, that would be great…

Office Space is a wonderful, hilarious, beloved movie about a horrible, tragic, and despised phenomenon: office culture. In it, a protagonist suddenly wakes up to realize what a nightmarish reality his daily cubicle truly is. This misery is most concretely distilled in two entities: a faulty office printer, which he and his colleagues bludgeon to death, and his boss, Bill Lumbergh.

Lumbergh mistreats his employees, expects them to work weekends, and then lays them off without a second thought. But the worst part of the character — and the most effective — is how he talks: “Ah, ah, I almost forgot… I’m also going to need you to go ahead and come in on Sunday, too. We, uhhh, lost some people this week and we sorta need to play catch-up. Mmmmmkay? Thaaaaaanks.”

Another Lumbergh-ism is to follow up a request with the phrase, “…that would be great, thanks,” and walk away without hearing the response. The fact that the order is very, very thinly disguised as a polite request makes it all the more grating.

Even if you’re lucky enough to love your job, and your boss, these Lumbergh-isms might still be familiar to you. The film was written by the master of satire, Mike Judge (the man behind the current HBO series, The Silicon Valley). His portrayal of office life is unparalleled in art.

But now the Lumbergh-ism has become the subject of science. It turns out that linguists have studied the verbal patterns in the emails from thousands and thousands of bosses, and some of them were even more villainous than Lumbergh.

A Data Set With a History 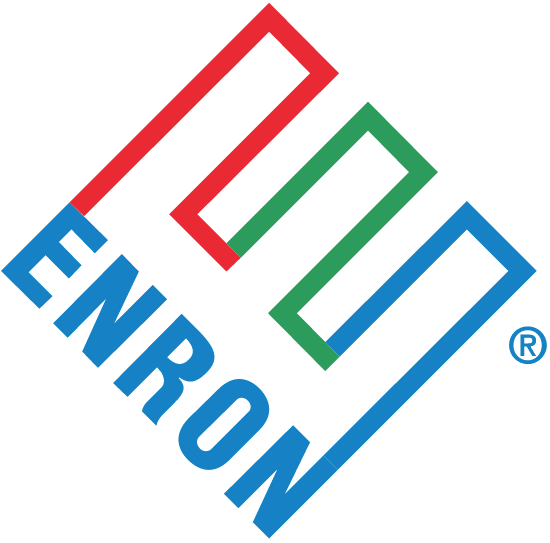 Once upon a time there was a massive corporation called Enron — “one of the world’s major energy, natural gas, communications, and pulp and paper companies.” The 20,000 or so employees of Enron communicated via email about operations, responsibilities, in-office politics and social events. At the top, executives communicated via email about the accounting fraud scheme that made the company look profitable to investors.

Famously tagged, “the smartest guys in the room,” in 2001 it was revealed that Enron’s leadership was quite a bit too smart. The scandal resulted in the company’s bankruptcy, a 14 billion dollar lawsuit, and the California energy crisis of the early 2000s. The US Courts ordered that most of Enron’s communications records — including a quarter million company emails — be released into the public domain.

In “Phrases that Signal Workplace Hierarchy,” Eric Gilbert at Georgia Tech, dissected that database for science. Enron’s organizational chart was also a matter of public record, as were the job titles of over 100 of its employees (compiled into a dataset from trial records by researchers at Johns Hopkins and USC). By linking this information, Gilbert’s team was able to label thousands of emails as traveling up, down, or sideways in the company hierarchy, and analyze them for patterns.

Researchers were worried about what they called “the Enron Confound.” The only reason they had access to this data was because Enron was an unusually corrupt company, so it might follow that the language patterns in its email communications were also unusual. To mitigate this effect, they also filtered out all emails sent after May 1, 2001; five months before the SEC launched its investigation into the company, but about when company executives started selling off their stock.

“With the private selling of Enron stock by executives, we think May 1 was a sea change moment,” they write in the paper. “Executives admitted (to themselves) that Enron would probably collapse. Before, on the other hand, it seems likely that Enron employees behaved toward one another the way people do in countless other companies.”

The resulting dataset was the unigrams, bigrams, and trigrams in thousands of internal emails at Enron before May 1, 2001, flagged for whether or not the email traveled to a professional superior.

An email in the data set travelling from a boss, down the hierarchy:

Please take a look at these spreadsheets and calc the gas usage by plant and by pipe in CA. Mike is telling us that most of these palnts [sic] will be shutting down in the next few weeks due to credit exposure. Let’s discuss the impact on sendouts. Thanks.

An email in the data set travelling up the hierarchy, to a superior:

Thank you! The itemization was absolutely no problem, and please let me know when I can do things like that to make your job go more smoothly. I know the market got chaotic late yesterday . . . So I thought I’d ask in the future, is it you I should come to, or real-time? Thanks again for your help.

Gilbert and his team took their dataset and looked for the one, two, and three-word phrases that were the best and worst indicators of whether an email was moving up the hierarchy.

These are the top 30 phrases moving up the hierarchy. The ranking variable, β, corresponds to both discriminative power of a phrase, and to its obscurity — it is easier for a phrase that occurs less frequently in the data set to skew into either category (in an up-travelling email, or not). The top phrase that people at Enron wrote to their bosses, or their bosses was: “the ability to.” 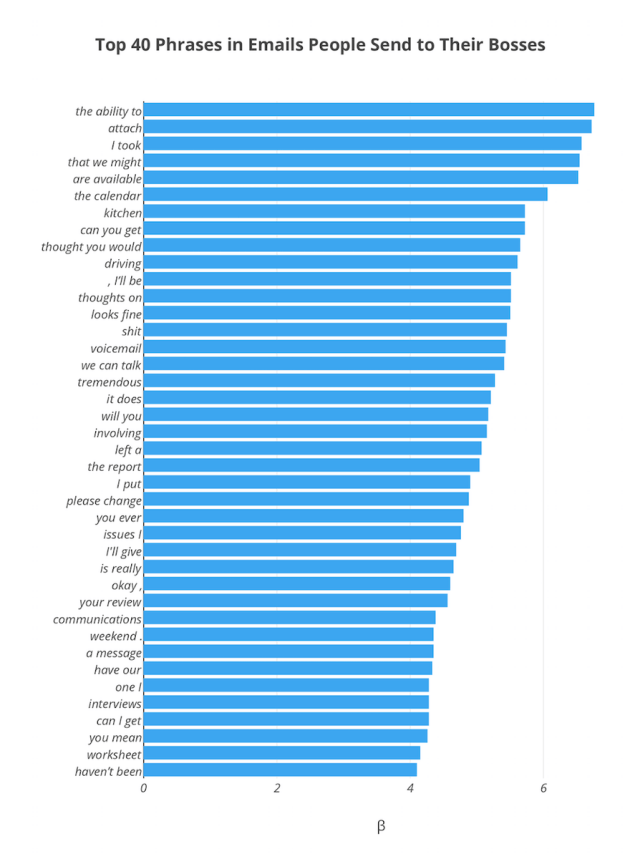 Some of these phrases are more suggestive than others. The researchers note that “attach” implies that most emailed documents travel up — people hand assignments off to their bosses more than superiors send documents to people beneath them. And they say the phrase “thought you would” has the “ring of hedging politeness.”

One surprise on this list is the word “shit,” which definitely does not have the “ring of hedging politeness.” “I don’t know what the story on the cursing is,” Gilbert has said. “Maybe that’s the next paper.”

“Weekend” also appears on this list, which the researchers initially also found surprising. Intuitively, people are unlikely to discuss weekend plans with their superiors more than their colleagues or subordinates. But, it turns out, those weekend plans often involve working:

Hi Carol, my home number is [redacted] — weekends would work fine so give me a call any time.

The following is table is ranked according to the most-negative values of β — phrases exceptionally unlikely to appear in emails up the hierarchy. 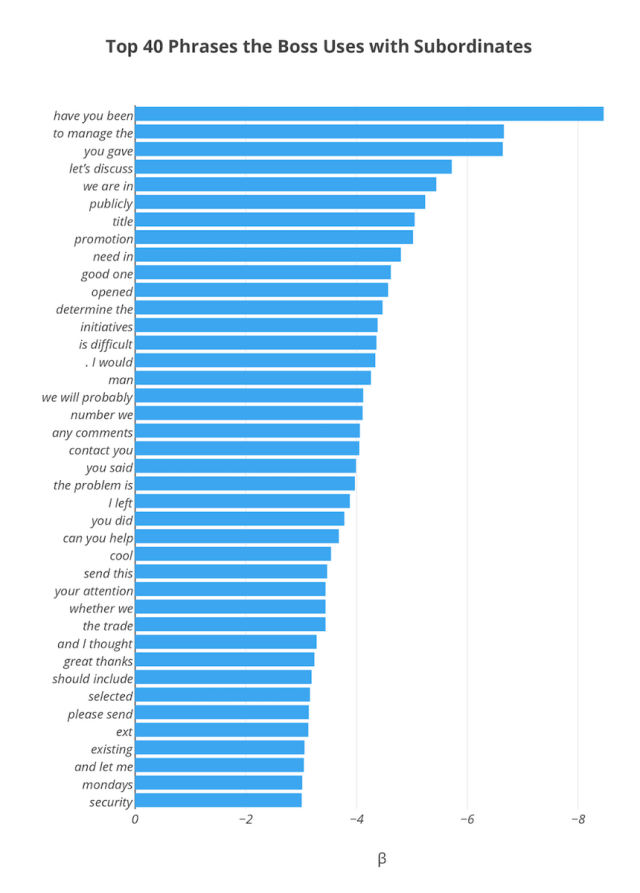 “Great thanks,” is on this list which shouldn’t be surprising. The paper does not give contextual examples but the phrase takes many forms in boss-speak, including: “This is great thanks,” in response to a delivered file, and, “That would be great thanks,” at the end of a request, and even, after somebody answers a question or agrees to do something, just, “Great thanks.”

“Have you been,” and “I hope you,” also both appear on this list. In some emails, they’re used in a social context: e.g. “How have you been?” “I hope you are well.” But they also were used by bosses checking up on the status of projects:

Did Tim already send you these documents for your review? If he did, have you been working with the Houston group on them or do you want to tell me about any problems?

Dan, I hope you haven’t wasted much time on this one so far. Let me know where this stands. C

Aaron, I sent you a file a few days ago. I hope you could open it. Vince 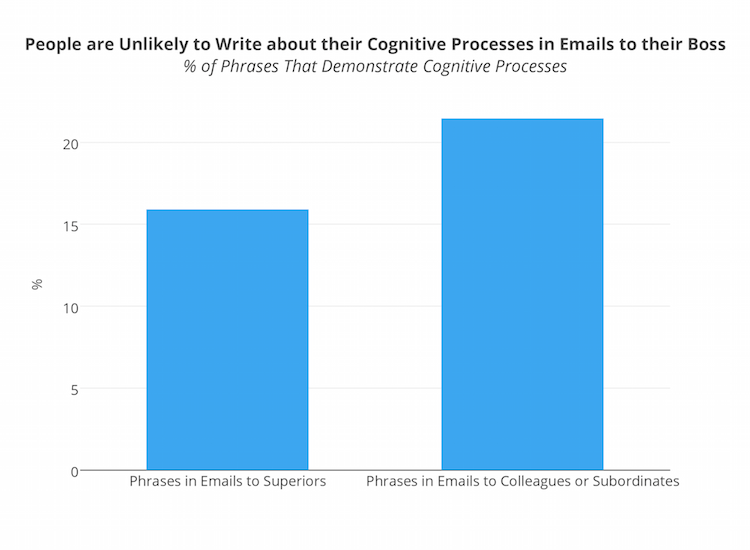 “Depending on your perspective […], this isn’t surprising,” they write. “It seems reasonable to think that people only go to their bosses when they have an answer, not when they want to work out the answer.”

The Gender Gap in Overt Displays of Power

A lot of the phrases associated with boss emails come across as nagging or demanding. But then, why shouldn’t the? Bosses, after all, have authority over the people they outrank. “Bossing” them around is in the job title. But some bosses use softer language than others: “It would be great if you could come to my office right now,” versus, “Please come to my office right now.”

Researchers went through the Enron data set and looked at overt display of power use by hierarchy, and by gender. Unsurprisingly, emails from superiors to people beneath them in the hierarchy had more overt displays of power than the emails people sent to their superiors.

But, when the emails were separated by the gender of the sender, they found that this trend only held for male superiors. The difference between female subordinates and female superiors’ use of overt displays of power was not statistically significant.

Mean count of overt displays of power for different groups. The overall difference between subordinates and superiors in general is entirely due to men. Prabhakhan et. al.

Gilbert, when he published his article, noted that being able to identify hierarchy from the text of emails could have practical applications. A company could apply his methods to its own internal communications and discover informal structures of power within its ranks. Maybe a mid-level manager is laying the groundwork for a coup, gaining authority over subordinates on other teams. Or people lateral to him on the org chart are suddenly sending him “attachments” for him to “review.”

Or, less cynically, you could identify promising young hires for promotion: “Imagine a study investigating who in an organization disproportionately attracts upward language. Do they move up the ladder faster?”

Even more practical to a consumer, Gilbert speculates that his method can help an email client flag when a message is from a very important person. For those of us who need help prioritizing their inbox, Lumbergh-isms might prove very practical indeed.