The Mathematics of History 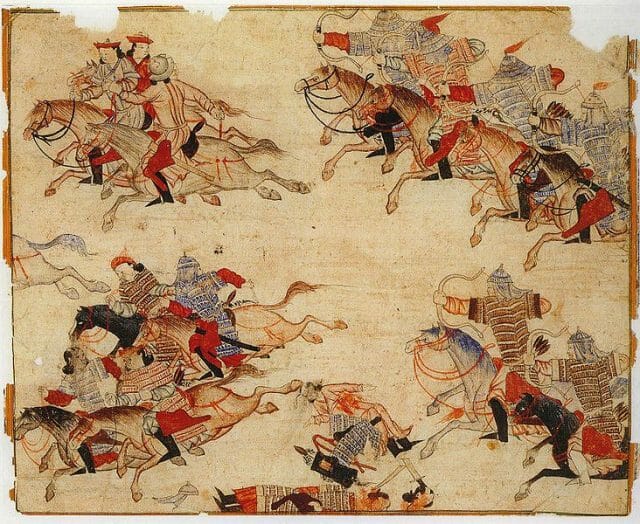 In Isaac Asimov’s science fiction series Foundation, mathematicians known as psychohistorians use statistics to make predictions about future events. Real historians aren’t ready to turn their gaze from the past to the future quite yet – nor to save the galaxy from a dark age lasting 30,000 years – but they may be ready to unleash statistics on the past.

At least that is what Peter Turchin, a professor of Ecology, Evolutionary Biology, Mathematics, and Anthropology, is trying to do. He coined the term cliodynamics to describe a field focused on applying statistical models to explain historical outcomes and trends. And, in a recent paper, he unveils a model that simulates the rise and fall of empires and complex societies over 3,000 years of human history.

The goal of such a simulation is not a perfect recounting of history – something left to historians studying past events in their minutiae – but rather to test the explanatory power of grand theories. Some scholars credit the development of large societies to better soil and domesticable animals that spur their growth. Others argue that long-distance trade played the key role. Mathematical models offer a quantifiable way to test between them.

Turchin supposes that the most pressing question is how humans cooperate on a large scale rather than fragmenting into smaller groups. How do groups of people in a large civilization trust other members that they do not know? How does a multi-ethnic society not fracture along its constituent groups?

The model tests an explanation focused on institutions and “ultrasocial norms” that enable large populations to work together – a government run by professional bureaucrats, for example, or a universal religion that binds the population. Today, we recognize these institutions and ultrasocial norms as the government (or state) and rights of citizenship. But these norms and institutions are difficult and costly to develop. Turchin believes that it took a strong motivator to spur their development – war:

The central premise of the model, which we test, is that costly institutions that enabled large human groups to function without splitting up evolved as a result of intense competition between societies—primarily warfare.

To build that into the model, they divided all of Africa and Eurasia into gridded squares which were each categorized by a few environmental variables (the type of habitat, elevation, and whether it had agriculture in 1500 B.C.E.). They then “seeded” military technology in squares adjacent to the grasslands of central Asia, because the domestication of horses—the dominant military technology of the age—likely arose there initially.

Over time, the model allowed for domesticated horses to spread between adjacent squares. It also simulated conflict between various entities, allowing squares to take over nearby squares, determining victory based on the area each entity controlled, and thus growing the sizes of empires. After plugging in these variables, they let the model simulate 3,000 years of human history, then compared its results to actual data, gleaned from a variety of historical atlases.

The model is simplistic. Military history buffs are likely to take issue with the fact that it equates power with territory size when small naval empires like the Dutch and British proved so dominant. But in many ways that makes the model’s success all the more impressive. It matched real data on the spread of civilizations from 1500 BCE to 1500 CE with 65% accuracy – a result that exceeded even the researchers’ expectations.

The paper concludes that the institutions and norms of statehood, driven by warfare, played a crucial role in the development of large societies. Turchin adds that the model suggests why a history of statehood is important for political stability and wealth.

While Turchin’s methods of testing out historical theories is novel, his conclusions confirm one of the most popular theories in political science for the development of large, wealthy nation-states. It was famously described by history and political science professor Charles Tilly by the maxim “War made the state and the state made war.” He recounts the origins and growth of states through the analogy of organized crime:

If protection rackets represent organised crime at its smoothest, then war risking and state making – quintessential protection rackets with the advantage of legitimacy – qualify as our largest examples of organized crime. Without branding all generals and statesmen as murderers or thieves, I want to urge the value of that analogy. At least for the European experience of the past few centuries, a portrait of war makers and state makers as coercive and self-seeking entrepreneurs bears a far greater resemblance to the facts than do its chief alternatives.

The resemblance of a political leader to a mafia don can best be seen today in regions without strong states. In Somalia, where the internationally recognized government rules in name only, the el Shabab militant group is one of many power brokers controlling territory. A New York Times article describes the extortionary means by which the organization finances its activities:

Illicit ivory, kidnappings, piracy ransoms, smuggled charcoal, extorted payments from aid organizations and even fake charity drives pretending to collect money for the poor — the Shabab militant group has shifted from one illegal business to another, drawing money from East Africa’s underworld to finance attacks like the recent deadly siege at a Nairobi shopping mall.

However, it also funds its fight with the Somali government and other enemies through a tax system:

Somali elders say the Shabab employ a team of accountants — essentially white-collar militants — who have devised elaborate taxation schemes in Somalia, for instance $500 per farm per year or $2 for every sack of rice that passes through their checkpoints.

“They calculate your income, they do the math,” said Mohamed Aden, a former president of Himan and Heeb, a partially autonomous region of central Somalia near Shabab territory. “And then you have to obey. Otherwise, they kill you. That’s just how it is.”

It sounds criminal to demand taxes and kill those who don’t pay. But, of course, every nation taxes its citizens. It may not kill tax dodgers, but it does imprison them – a punishment backed up by force. And especially for nascent states, these funds are not only necessary to improve institutions and provide services but are also lucrative for those receiving them.

In Tilly’s formulation, large, modern states in Europe resulted from a Darwinian struggle. The dominant activity of rulers was war. The state waged war to gain more territory or defend its own. It also waged war to exert control within its own territory – vanquishing subordinate but rebellious lords who rulers depended on to control their population. And it waged war to protect its population’s interests – perhaps by fighting their trade competitors.

In each case, funding warfare required a build up of the state. More taxes to fund war making meant a bureaucracy to administer tax collection, as did a system of police and courts to control the population as rulers transitioned from indirect rule via feudal lords to direct rule. And as progress in military technology made war increasingly expensive, so too did the pressure for states to grow large enough to fund expensive armies. Over centuries, the crucible of war transformed a large number of small, simple societies into a small number of strong and prosperous states. Their leaders transformed from racketeers into modern statesmen.

Tilly sets forth a dismal account of the birth of prosperous nations. But as states increasingly depended on their people to provide them with the means for making war, populations demanded and won concessions in the form of rights and representative government we lionize today. As time went on and people could make more money from trade, industry, and technology than from extracting the surplus earnings of a subservient population, the ruler-ruled relationship became less of a zero sum game.

These theories help us understand why efforts to develop strong, prosperous societies so often fails today. In Afghanistan, the bureaucracy and political structure established after the fall of the Taliban looked very much like that of a European state. But Western diplomats grew frustrated as Afghan leaders ruled like traditional tribal chiefs. Governors were all too often warlords, distributing money and services based on personal relationships, enriching themselves, and directing private armies. Or governors acted subservient to the warlords brokering power in the region.

Keeping in mind the importance of warfare to state development, this comes as no surprise. Afghanistan did not have a strong history of statehood. Rule by rival warlords represents a stage before the top ruler establishes a monopoly over control of the territory and the use of violence.

In the Penguin Atlas of Ancient History, psychiatrist and historian Colin McEvedy writes, “History being a branch of the biological sciences, its ultimate expression must be mathematical.” But if Turchin’s work modelling theories of historians like Charles Tilly demonstrates the ability of statistics to bear out grand theories, examining the application of Tilly’s theory in the present day demonstrates the difficulties of explaining thousands of years of history through consistent principles.

Warfare’s ability to spur institutions that bind large societies together may explain the rise and fall of empires and the emergence of strong states in Europe. But the huge power imbalances in international relations make the theory less compelling today.

Take the example of Jordan, a small country in the Middle East surrounded by war and violence in Syria, Iraq, and Israel/Palestine. By making itself a useful ally of the United States, it feels none of the pressures of Tilly’s model. In return for playing nice with Israel and cooperating with American security interests, the King of Jordan receives security guarantees, military equipment, and development aid from the United States. The King does not rely on the population for the funds to defend his territory – nor feel the need to extend them rights in exchange for that help. As Tilly himself recognized, new states born out of decolonization do not see the same phenomenon of war and the state reinforcing each other. Outside powers shelter them by offering security and military technology in exchange for oil, commodities, or military and political alliances.

Turchin’s and Tilly’s conclusions about war’s responsibility for the rise of empires and advanced societies is fairly dismal. It’s more unfortunate that war’s one redeeming feature no longer seems to apply. The bigger question for the future of a mathematical expression of history is whether the principles governing the rise of the first complex human societies still apply today.