The Most (and Least) Expensive Cities for Vacation Rentals 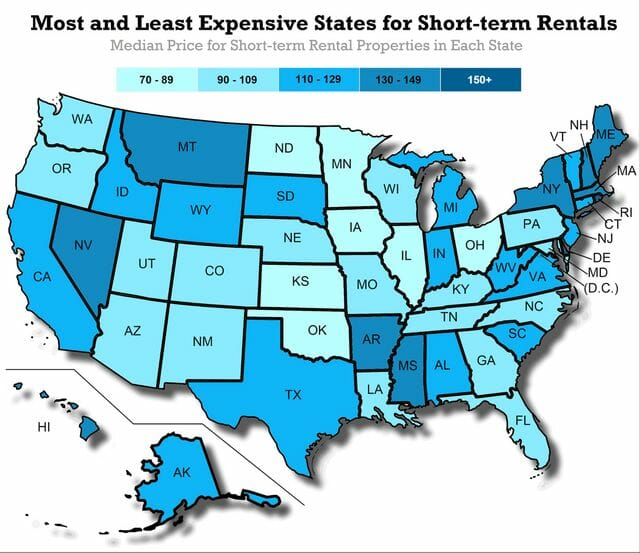 In search of the perfect destination to celebrate the holidays? Where you stay will take up a serious portion of your vacation budget, so before booking a flight, you should figure out what you can expect to spend once you’re there.

Short-term rental websites have made it easier than ever to find a place to stay. They’re helping to lower the cost of travel in major cities, and locations that were previously forgotten by the hotel industry now have a growing number of rentals from which to choose.

So which cities have the most and least expensive rentals? We analyzed data from Priceonomics customer Datafiniti, a company that tracks web data, including short-term rental listings on the major platforms.

We found at the state level, the two smallest states, Rhode Island and Delaware, were the most expensive, costing $165 and $150 per night respectively. The most expensive cities were popular vacation spots near beaches and ski mountains. At $250 per night, five cities are tied for most expensive: East Hampton, NY, Truckee, CA, Tahoe City, CA, Keystone, CO, and Annapolis, MD.

The least expensive states were largely in the Midwest with Oklahoma and Kansas tied for the lowest median price, $70 per night. Smaller cities along the East Coast and in the middle of the country were the most affordable. Detroit, MI was the cheapest, costing only $59 per night and Orlando, FL was number two at $60 per night.

This is just scratching the surface though. There are a lot of different ways to look at this data and many other metrics to compare. We’ve done our best here to include those most relevant for you when planning your next trip.

For our analysis, we only included rentals with at least one review on its respective platform to ensure all listings were legitimate. As a note, a majority of our data was collected between July and September of 2016. For our first data cut, we’ve compared median prices across states. 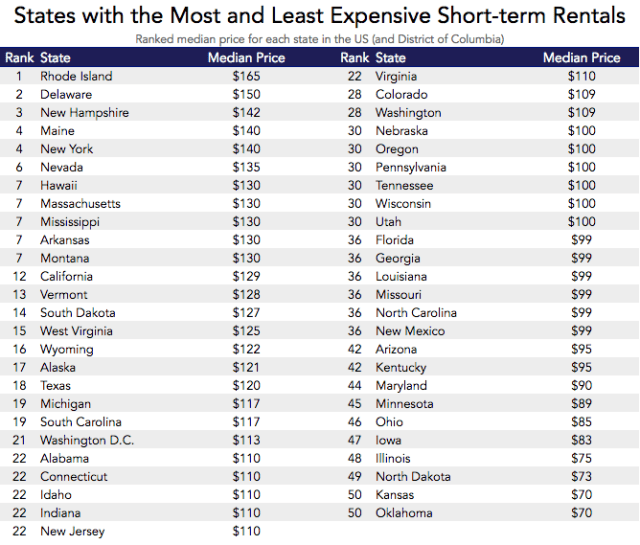 As you may have expected, there are regional trends in rental prices. The top five states with the highest median price are all in the Northeast. Close behind are states known for tourism including HI, CA, and NV. States from the Southeast and Gulf Coast sit in the middle of our rankings. Finally, the lowest median prices are largely in states from the Midwest.

To really understand which markets are driving the prices, we must look at each city and this is where we spent the majority of our investigation. When drilling down to the city level, we first narrowed our analysis to the 100 cities with the most rental listings. 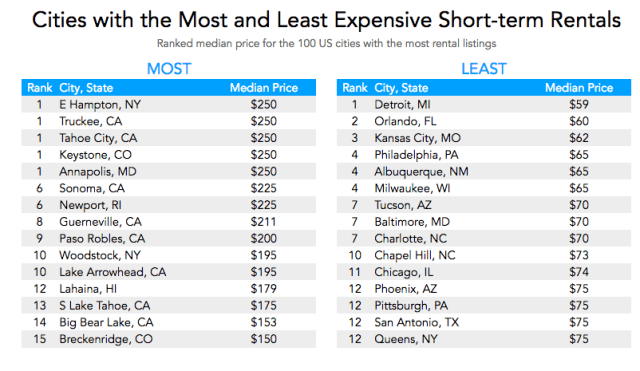 The cheapest places are mostly mid-sized cities in the Mid-Atlantic and Midwest. Some of the more cost-effective locations are popular tourist destinations, like Philadelphia, which has some of our most important historical landmarks, and Orlando with its popular theme parks.

Still, this is not a completely fair way to judge each city. Many of the most expensive vacation rentals are larger properties, some being entire ski lodges or beach houses. Comparing places like that with a studio apartment in Manhattan is not an accurate comparison. To solve this imbalance, we further segmented the data by the number of beds in each property.

We chose three categories for further investigation, rentals with one bed, rentals with two beds, and rentals with three beds. Our first grouping would likely attract a solo traveler or a couple on vacation. The latter two provide adequate accommodations for a family or group of friends traveling together. Again for these comparisons, we’ve only looked at the 100 cities with the most listings to ensure adequate sample size. 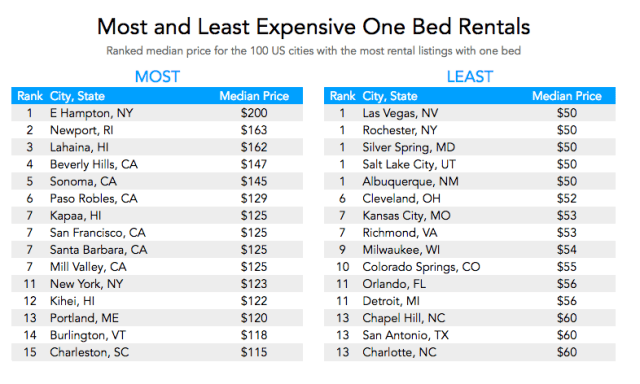 For rentals with one bed, major cities such as New York, San Francisco, and areas around LA are among the most expensive. Though major vacation destinations such as East Hampton, NY, Newport, RI, and Lahaina, HI are still the top three.

Midwestern cities, as well as Las Vegas, are the most affordable. It’s likely that Vegas is on our list because renters have to compete with the very low prices of the hotels in the area. 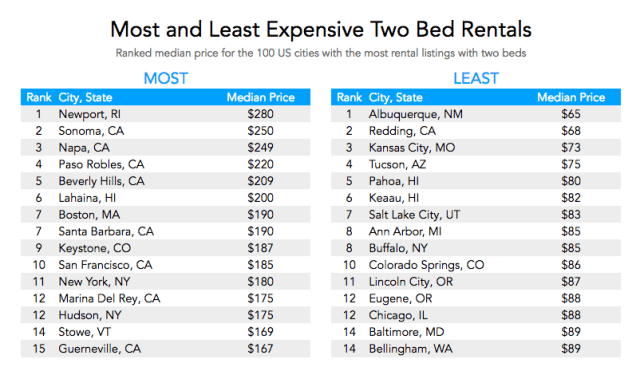 For two bed rentals, California beach towns dominate along with San Francisco, New York, and Boston. Newport, RI is once again the most expensive city. The least expensive cities are consistent with trends we’ve discussed earlier: smaller cities in the Midwest and West. 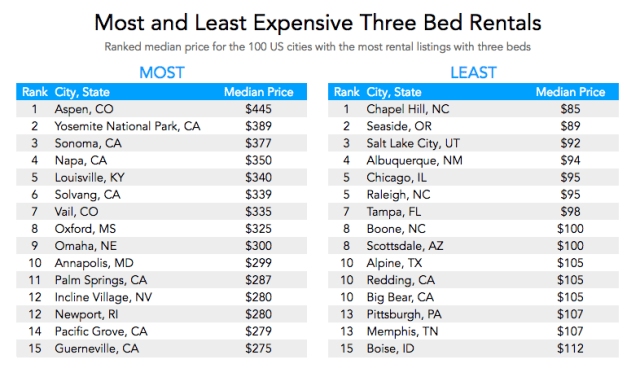 For three bed listings, popular beach and ski areas once again top our list of most expensive cities. We also see popular tourist destinations such as Yosemite National Park and Sonoma in CA. Our least expensive listings are in smaller cities, but there is much more geographic variation. Cities include Charlotte, NC, Salt Lake City, UT, and Memphis, TN, but even Chicago.

One of the more interesting inclusions on the most expensive three bed rental list is Omaha, NE. Most of our data for Omaha was collected around August of 2016 and this time period overlaps closely with the 2016 U.S. Olympic Swim Trials. Locals were benefitting from the event by renting out homes and rooms to meet the demand for the event.

Another curious inclusion is Louisville, KY. Once again we found that this is a spike caused by a major event: the Kentucky Derby. When investigating individual listings in search of a possible error, we found that most of the high priced listings explicitly mentioned the Derby in their title or description.

Finally, it’s important to comment on how prices can vary in each market. You’re not guaranteed the median price and you can see a range of prices when you’re trying to book. In areas with a very small range of prices, you can expect to pay very close to the median, but in markets with bigger ranges, it may be worthwhile to keep searching to find a much cheaper option.

For this analysis, we used interquartile range as a measure of how much the price within a city can vary. Interquartile range (IQR) is the difference between the first and third quartile for a set of data. For this, we’re once again looking at each city overall, regardless of the number of beds in each property.

The most expensive cities also tend to have the most variation in price. We also see small cities with unexpectedly high prices in our top ten (Omaha and Louisville). This reinforces our hypothesis that normally prices in these markets are low and sharp spikes come around the time of popular events. In smaller cities, which also tend to be cheaper, you can expect to find similar prices throughout all listings.

Number of listings for a city and seasonality can also impact variation in price. Seasonality is apparent for traditional hotels as well, with prices in skiing areas dropping during the summer months and popular vacation areas being cheaper when it is not summer or winter vacation months. Rental availability has the potential to have more of an effect for short-term rentals as they become more popular. As the supply of rentals grows, prices should decrease, with the most noticeable effect taking place in areas with fewer options currently.

One lesson we can take away from this data is that it’s worth considering the proximity of some of these less expensive cities to your main destination. For example, Jersey City is minutes away from New York City by mass transit but is still among one of the cheaper options with little variation in price. So if your goal is to explore the Big Apple, it might be worth the detour.