The Most Prolific Editor on Wikipedia 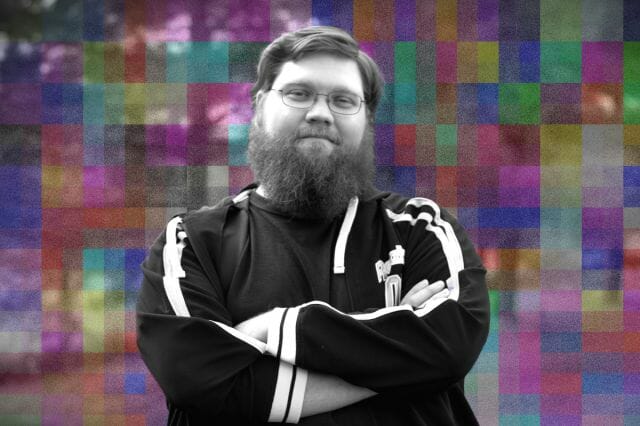 As of this morning, the English-language Wikipedia contains 4,985,975 articles. If these were printed and bound into books — each 25cm tall by 5cm thick, like Britannica — there would be 2,207 volumes, each containing 1,600,000 words.

All of this content is, of course, user-submitted. It is also user-policed: the site requires constant maintenance from a massive pool of unpaid editors, who do things like fix typos, remove instances of vandalism (like de-categorizing George W. Bush as a “sexually-transmitted disease”), and improving the breadth and accuracy of each and every page.

Since joining Wikipedia a decade ago, 32-year-old Justin Anthony Knapp (username “koavf”) has established himself as the the site’s most active contributor of all time. He has made an astonishing 1,485,342 edits (an average of 385 per day), ranging in topic from Taylor Swift to the history of blacksmithing.

What’s life like as Wikipedia’s most prolific editor? And what has compelled this man to dedicate thousands of hours of his time, knowledge, and energy to an online encyclopedia for absolutely no compensation? We gave him a call to find out. Though he’d used Wikipedia once before for a high school project on India, Knapp first became a regular reader of the site in 2003, two years after Jimmy Wales and Larry Sanger launched it. Back then, there were only around 100,000 articles, but the content was growing at a rate of 200 new pages per day, largely thanks to a growing team of community contributors.

At the time, Knapp was three years into a college degree at Indiana University-Purdue University Indianapolis, and had an insatiable appetite for new knowledge. To the young intellectual, Wikipedia was a treasure trove of accessible information.

“I didn’t have Internet, or a computer, at home,” he recalls, “so I’d print out Wikipedia articles on campus, then read them at home.”

The following winter, Knapp realized that if he started making edits, he could “play a substantial part in creating and maintaining the site’s content.” From an anonymous IP address, he made his first contribution: an addition to the “Political Status of Taiwan” wiki. Shortly thereafter, he created a username, “koavf”, and devoted himself to a life of Wikipedia martyrdom.

He began with a few of his interests: international relations and conflicts (specifically relating to Western Sahara), Chinese history, country flags, and music. Most of his early edits were simply grammatical corrections, or small additions, but eventually he graduated to creating entire “portals” (Western Sahara) and drastically re-writing major pages (George Orwell, Smithsonian Collection of Classic Jazz, Kurt Vonnegut). 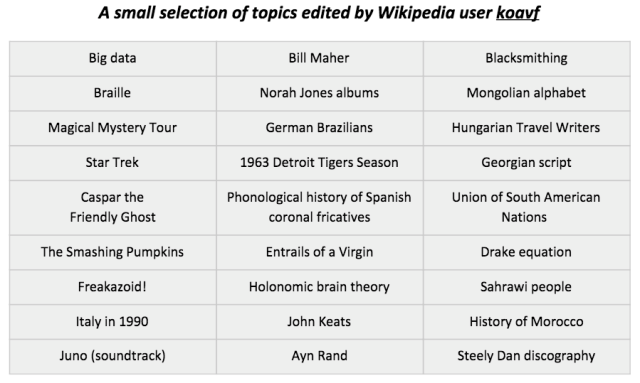 By 2009, Knapp had earned two Bachelor of Science degrees (one in philosophy, and another in political science), and decided to “stick around campus” for a few years, where he worked intermittently as a pizza delivery guy, a bookstore clerk, a computer lab assistant, and a research assistant. These jobs, which he deemed to be “of little importance,” left him with plenty of time to make edits.

“Editing Wikipedia became my hobby — and for a while, it was basically all I did,” he says. For up to 16 hours a day, Knapp would surf around various pages looking for inaccuracies or missing information. Oftentimes, he’d learn something in a book or on the radio, then go to the Wikipedia page of whatever that information pertained to and add it. It was not uncommon for him to make over 1,000 edits in the course of a day.

In April of 2012, after 7 years of tireless dedication to his craft, Knapp became the first Wikipedia Editor to surpass 1,000,000 edits, a feat so Herculean that Jimmy Wales, the site’s founder, proclaimed April 20th “Justin Knapp Day”:

“I was unemployed for some time, I was depressed, and was sitting in bed all day watching Lost and editing Wikipedia,” says Knapp. “When the 1 millionth edit happened, members of Wikimedia Foundation were generous enough to fly me out to DC. It felt great that my work was being appreciated.”

But not all of Knapp’s edits were welcome.

While Wikipedia is built on the tenets of free speech and democratic contribution, admins do enforce a general manual of style and a “neutral point of view” policy. Any editors that break these commandments face a week-long ban from admins.

“I wouldn’t be surprised if I’ve been banned more than anyone,” laughs Knapps. “Usually, it was over something political, where I was bickering with editors who took a different stance, or soapboxing too much.”

Politically controversial pages are particularly susceptible to trolls, as confirmed by a FiveThirtyEight analysis. Pages like “George W. Bush” (45,273 revisions), “United States” (32,571), and “Barack Obama” (23,514) can draw hundreds of edits per day, ranging from subtle re-wordings to racist slurs. Long-term abusers of pages like this receive a lifetime ban, and are added to a watchlist, where their “crimes” are publically displayed beside their usernames. Knapp (third from left) at a Wikipedia training event in 2011

As Knapp gained media attention for his editing prowess, he began to attract a lot of attention from marketers, business owners, and academics seeking to get a page written about them:

“Several companies—they’re hardly even companies, they’re just guys in basements that have Internet connections—came to me and would say, ‘Hey, can you write an article about my company on Wikipedia? I really want an article about my company on Wikipedia.’ If they’re just interested in using it as an advertising platform, not only is it inappropriate, it’s also just not even good business sense. It doesn’t work.”

“I could have earned enough to get myself a car from just saying, ‘Yeah, sure, I’ll write this article, or I’ll promote it,’” Knapp admitted in a Q&A in 2012. “[But] I’ve never made it a point to try to solicit anyone to give me money.”

Today, Knapp has nearly 1.5 million Wikipedia edits to his name. Considering an average of one minute per edit, he’s spent a total of 1,041 days (2.8 years) editing — though his pace has admittedly slowed a bit from his glory days.

He works 65 hours a week at a restaurant, and also maintains two volunteer jobs (including answering calls on a crisis hotline) that eat up an additional 10 hours a week. Frequently, he finds himself so exhausted that he has trouble finding the time to “contribute to free culture and knowledge.” Yet every day, no matter how exhausted he is, he still logs in and does exactly that.

Then, after a long pause over the phone, he provides a deeper driving motive:

“Everyone should do work that is not for money. I believe that when you have free time, you shouldn’t spend it idling. I’m able bodied; globally speaking (though not at all locally speaking), I’m rich. I have a lot of resources other people don’t have — an internet connection, free time, the ability to speak English — and it’s incumbent upon me to use them to make the world a better place.”

In many ways, Knapp’s answer channels the attitude of Jimmy Wales, who established Wikipedia as a non-profit, and who, according to The New York Times, has a net worth of only around $1 million, despite sitting on a potential goldmine of ad revenue. “Yes, I’m rich, but not in the way most people think about the question,” he wrote on Quora a few years ago. “People who equate wealth in any serious way with ‘amount of money that you have’ are missing a lot of richness in how humans value things.”

Though he considers what he does to have considerable “value”, Wikipedia’s #1 editor doesn’t feel financial compensation is necessary, or even deserved.

“A lot of the work I do is useful, but not really that critical,” Knapp reasons. “Besides, the reward is in the activity itself. It is a labor of love.”