The Most Solar Places in America 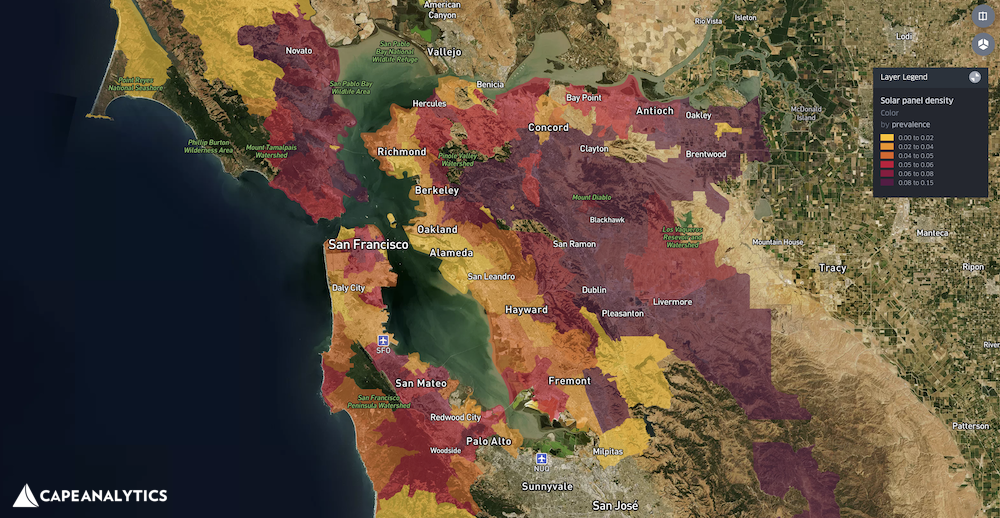 After many decades of false starts, renewable energy is poised to one day challenge fossil fuels as the energy source of choice in America. As an example, in 2018, 17.1% of electricity in the United States was generated from renewable sources. While solar energy made up just 1.59% of electricity produced in 2018, it was still an increase of 20.5% over the prior year.

While solar may be becoming more popular in the United States, its popularity is not recognized everywhere. One common thread, however, is that people choose to go solar for various reasons; some choose for financial reasons, others for purely environmental. Locations where it’s sunny year-round also play a factor, while in other places the weather makes solar panels less viable.

We analyzed data from Priceonomics customer Cape Analytics, a company that uses AI to analyze huge quantities of geospatial data to help insurers and other companies better understand properties. By leveraging computer vision to parse aerial imagery, we can understand critical property information, such as the kind of roof a house has, whether a property has cleared vegetation around the house to guard against wildfires, or whether there are solar panels on the roof.

To that end, we wanted to better understand solar panel use in America and categorize “the most solar” places in the U.S. To accomplish this, we used AI to scan 38 million properties in 21 major metropolitan areas across the United States. Here’s a snapshot of what we learned:

An Analysis of Solar Homes Per Capita Across the United States

Of the 38 million homes we analyzed across the United States, 1.8% of them had solar panels. On a per-capita basis in the 21 metropolitan areas we examined, that came out to 1,837 solar homes per 100,000 homes. Some areas, however, have substantially higher (or lower) rates of solar panel adoption. The chart below shows the per capita solar homes split out by metropolitan area: 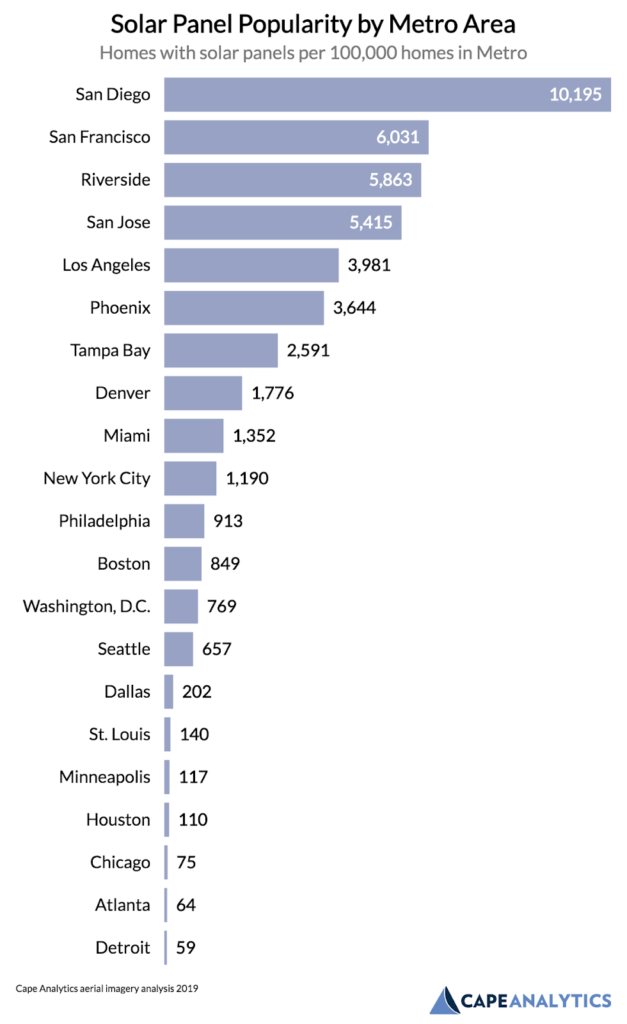 By a considerable margin, the San Diego metropolitan area leads the pack when it comes to solar penetration. For every 100,000 houses, 10,195 of them have solar panels—a rate of more than 10%. Rounding out the top 5 are San Francisco, Riverside, San Jose, and Los Angeles, all of which are located in California.

Why do so many homes in California have solar? Part of the reason is that the temperate climate provides year-round sun—obviously a critical factor for solar power. The chart below compares the number of days of sun per year versus the per capita number of solar homes. 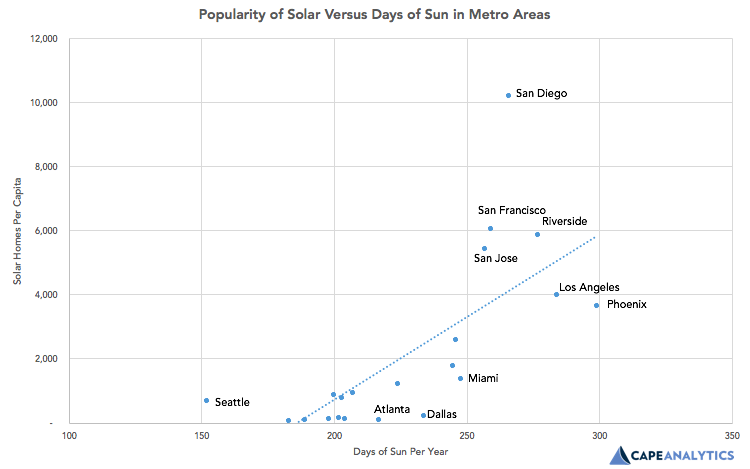 As you would expect, the more sunny days, the more solar homes you find. Some places, however, have about the same level of sun, but drastically different solar penetration. Locations that land above the line on the chart, such as San Diego, have more solar homes than you’d expect, whereas ones landing below the line, such as Atlanta, have fewer than you’d expect. Of all the places we studied, Phoenix has the most sunny days of the year, yet only about a third of the panel-equipped homes as San Diego. Atlanta and Dallas have decent weather, but a minimal number of solar homes.

Much of the solar penetration correlates to sunshine, but this doesn’t completely explain why comparably sunny places have very different levels of solar adoption. A huge driver of solar panels adoption is income, with wealthier homeowners being far more likely to go solar. This dynamic also helps explain why wealthy California areas top the most-solar list.

The Top Solar Cities & Neighborhoods in the United States

Given the dynamics of sunshine, wealth, incentives, and environmental considerations, which areas in America are the most solar according to analysis of our geospatial data?

Among the 21 metro areas we looked at in locations with at least 5,000 homes, we dug into the cities with the highest per-capita rate of solar panels. According to our analysis, below are the Top 100 most solar cities in the United States: 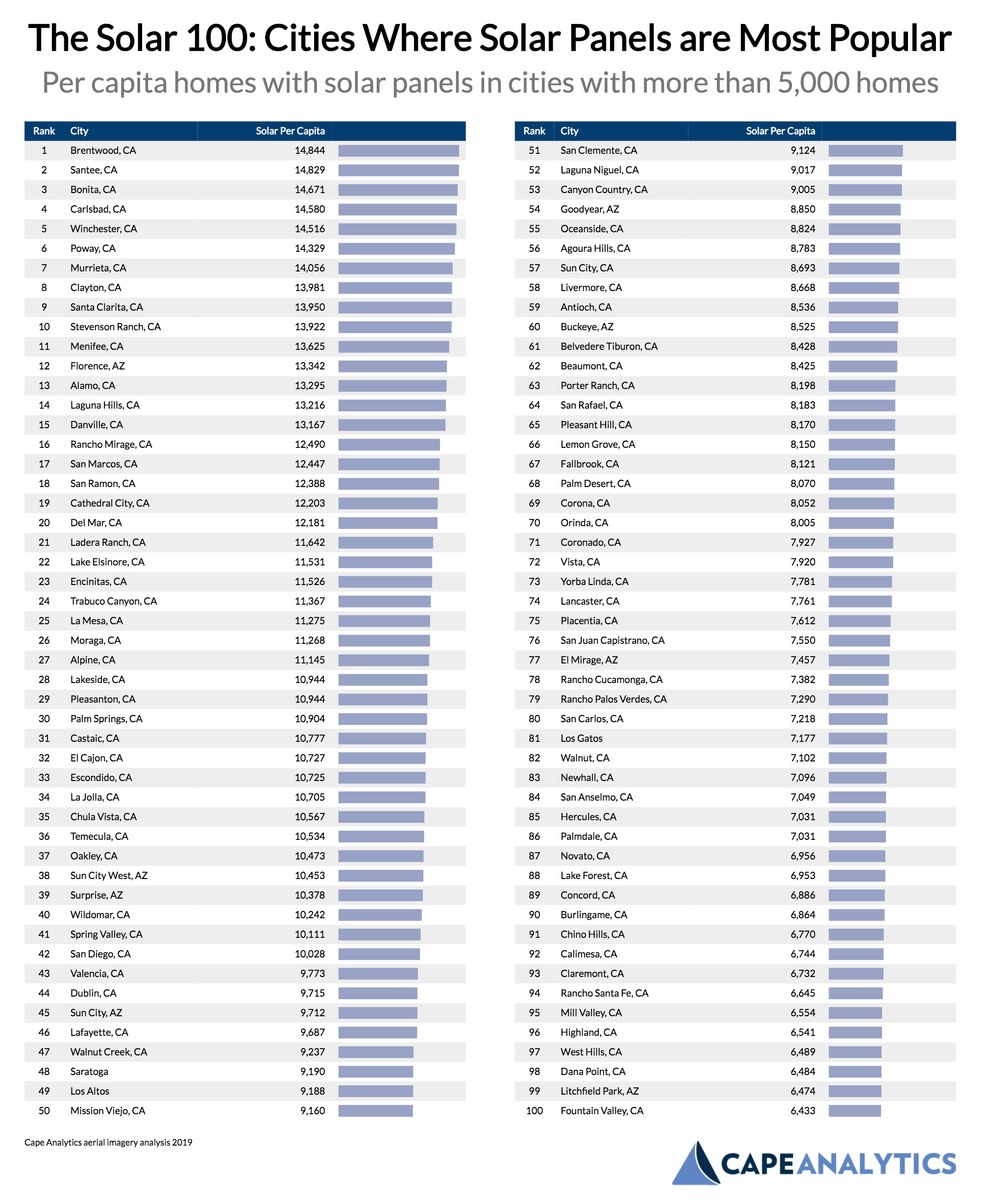 Brentwood, California, located in the San Francisco Bay area, leads the Solar 100 with nearly 14,844 solar homes per capita (14.8%). With only a few cities in Arizona cracking the list, California completely dominates the Solar 100.

Below are the top 25 most solar cities across three popular metropolitan areas: San Francisco, New York, and Dallas. 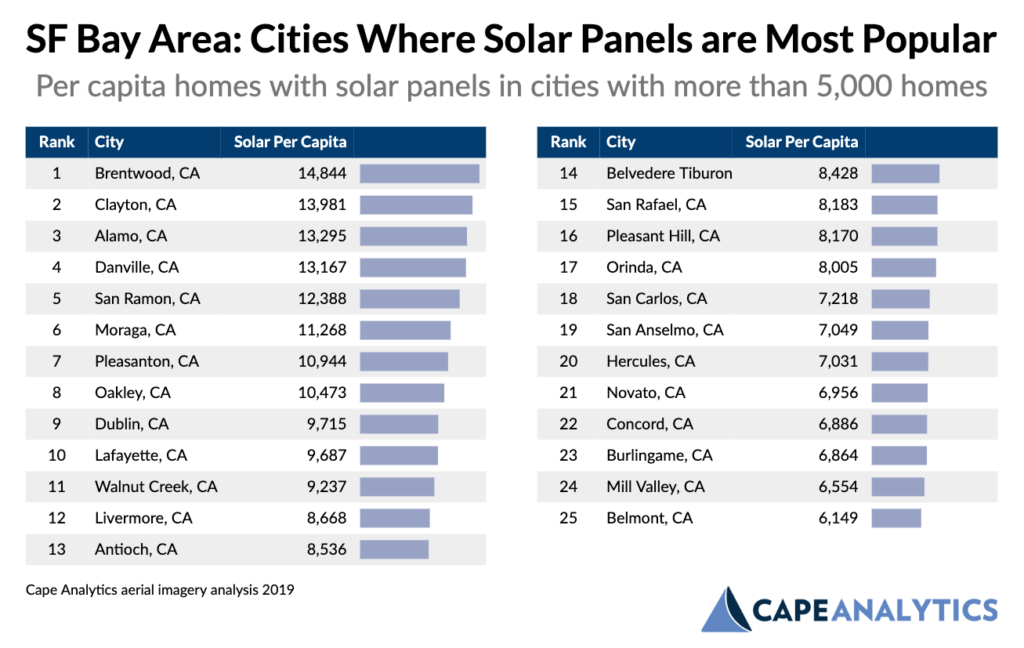 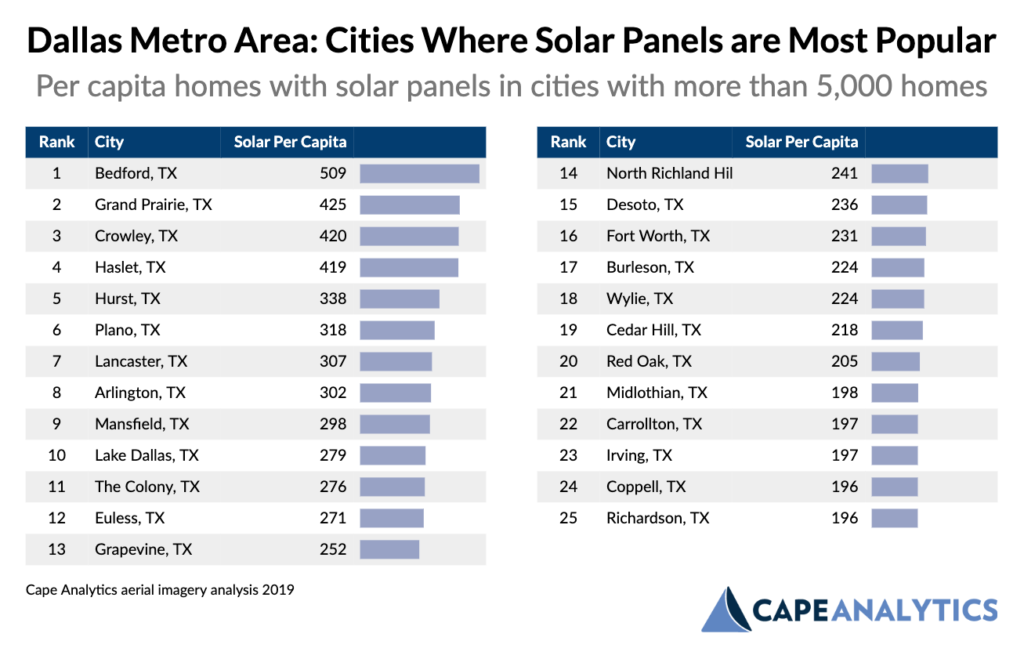 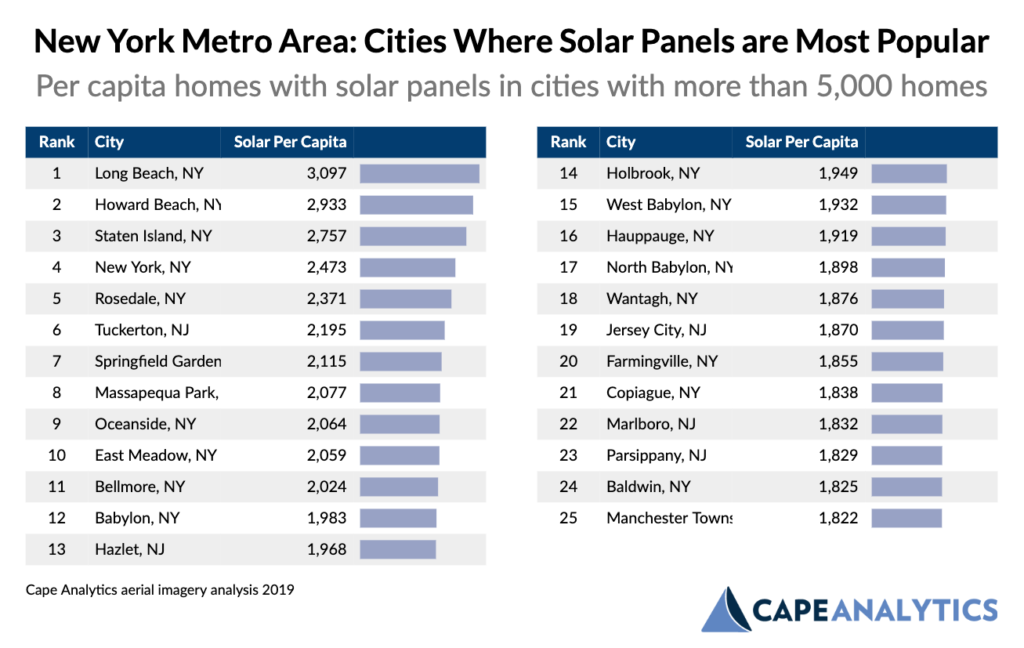 For reasons discussed earlier, solar panel installation is a decidedly local phenomenon. Neighborhoods with copious amounts of sun and expensive homes are more likely to have solar panels. What’s more, seeing your neighbor install panels may cause you to investigate solar adoption.

To conclude, let’s try to identify the “super solar” neighborhoods where an extremely high rate of homes have solar panels. Below are the top 100 most solar neighborhoods with at least 500 homes in the metros we studied: 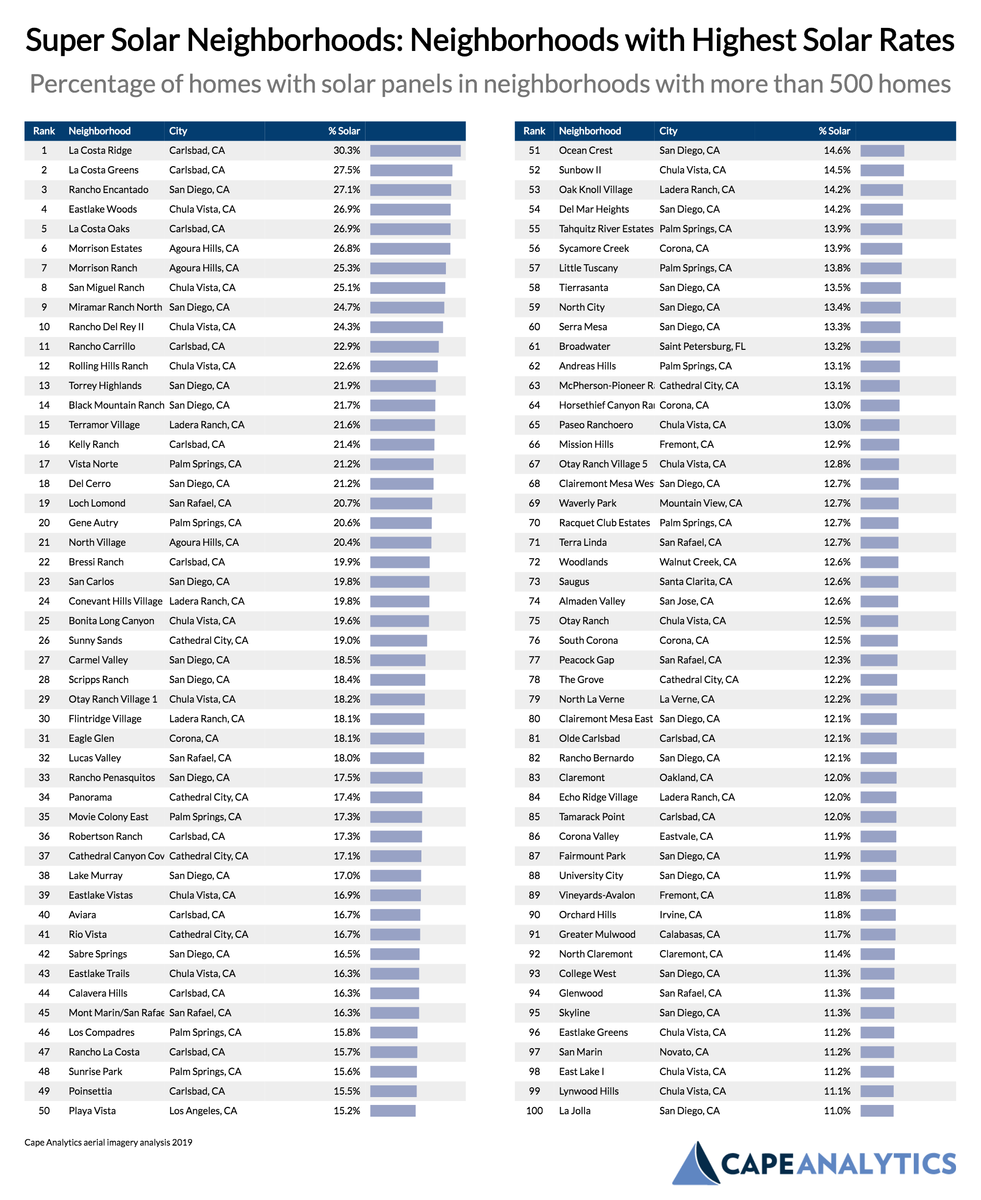 According to our analysis of geospatial data, 1.8% of homes in the metropolitan areas we studied have solar panels. Despite there being an ample amount of sun in places like Texas, Arizona, and Georgia, it’s California that dominates when it comes to adoption. Nearly all solar cities in America are located in the Golden State, despite it not being much sunnier than other places in America. When it comes to solar, it’s environmentalism, incentives, and income level that drive adoption.