The Most Viral Super Bowl Ads of All Time 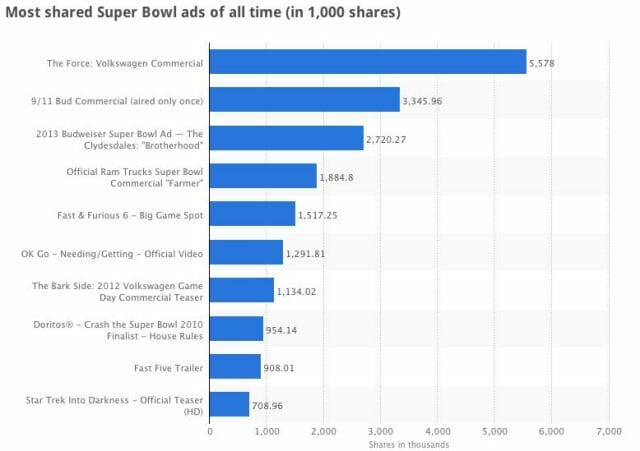 To place an ad during the 2014 Super Bowl, whether it’s actress Scarlett Johansson talking up SodaStream or Dannon and Chobani vying for domination of the Greek yogurt market, companies shelled out around $4 million per 30 seconds of air time.

That $4 million buys the eyeballs of over 100 million Americans. It’s the entrance fee to a competition whose grand prize is domination of America’s water cooler conversations for the next week.

In the above graphic, we can see who has won those competitions — at least over the virtual water coolers of social media. (Although since social media use is increasing, older ads are disadvantaged.) From Volkswagen’s ad of a frustrated child in a Darth Vader costume to the latest Star Trek trailer, these are the reactions that companies imagine when they plan a Super Bowl ad.

This author has two takeaways from this list. One, football ads really are all about cars, beers, and movies. (And soda. Where are the ads full of people being way to happy with their soda?) And two, The Fast and the Furious movie franchise is surprisingly popular, occupying two top spots in this list. (The franchise, one of the highest grossing of all time, has leaned on its social media dominance to remain more than a punchline.)

So next Sunday, if you lack a team to root for — like this Boston born author — don’t forget that you can still root for your favorite ad. And unlike a team on the field, you can actually contribute to an ad winning the top spot on 2014’s most viral list.