The Places in America Where All Your Salary Goes to Rent 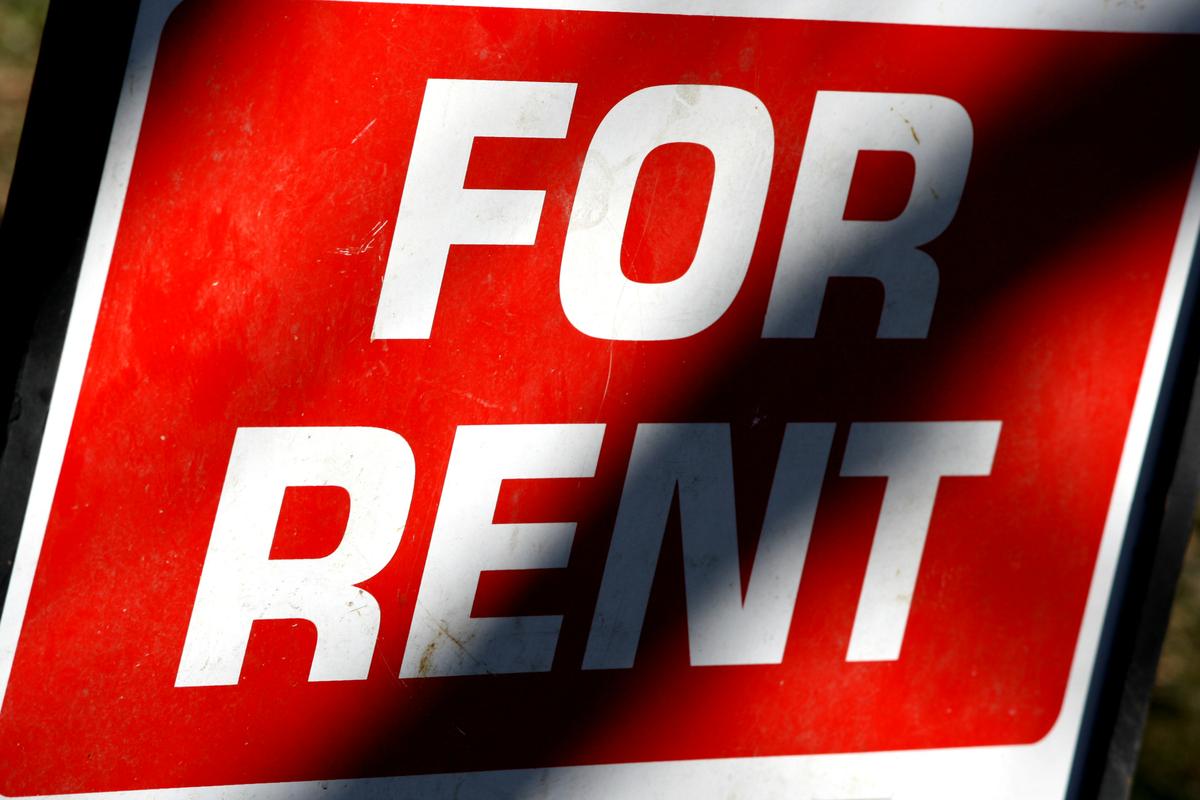 This post is adapted from the blog of Business Student.com, a Priceonomics Data Studio customer. Does your company have interesting data? Become a Priceonomics customer.

A career in “business” is broad enough that it can mean just about anything. Hundreds, if not thousands of jobs, can be classified as “business” related work ranging from being an accountant to a chief medical officer.

We analyzed data from Priceonomics customer Business Student.com, a company that has created an index of 127 “business” careers, where they track the average salaries and how they vary by location. While these jobs are by no means comprehensive of all jobs in business, they comprise a representative index of business careers and their salaries, that we call the “Business Jobs Index.”

So what are the highest and lowest paying jobs in our index? Which cities have highest paying business jobs and where you’ll still have money leftover after paying rent if you live there?

Lastly, we found there were a number of cities like San Francisco, Miami and Los Angeles that have high paying business jobs, but most of your income will go to paying rent.

Before diving into the data, a brief note on the methodology of our Business Jobs Index. The index is comprised of 127 popular business jobs.

For each of these jobs, we track the average salary on Indeed.com by location. 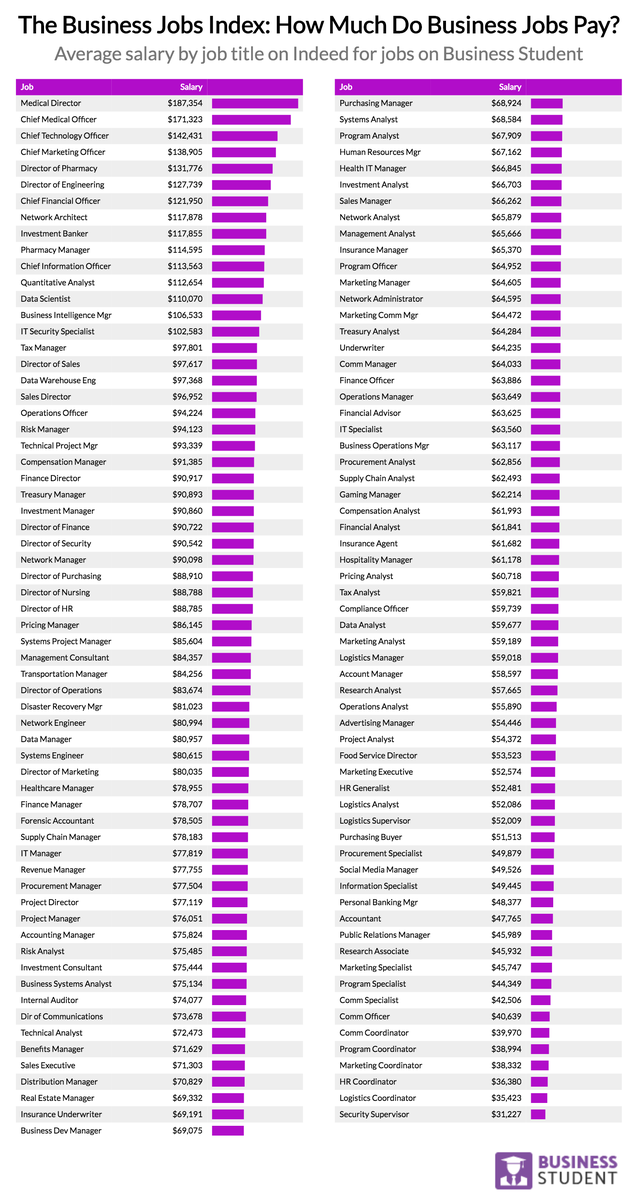 In our index, the highest paying jobs are senior positions in the medical industry or “C-suite” position like Chief Marketing Officer. The vast majority of the business jobs in our index pay less than a $100,000 salary however.

Popular jobs like Social Media Manager, Accountant, and HR Coordinator all pay less than $50,000 per year.

Which states pay the most in our Business Jobs Index? The following chart shows the average salary of business jobs by state, ranked from highest to lowest: 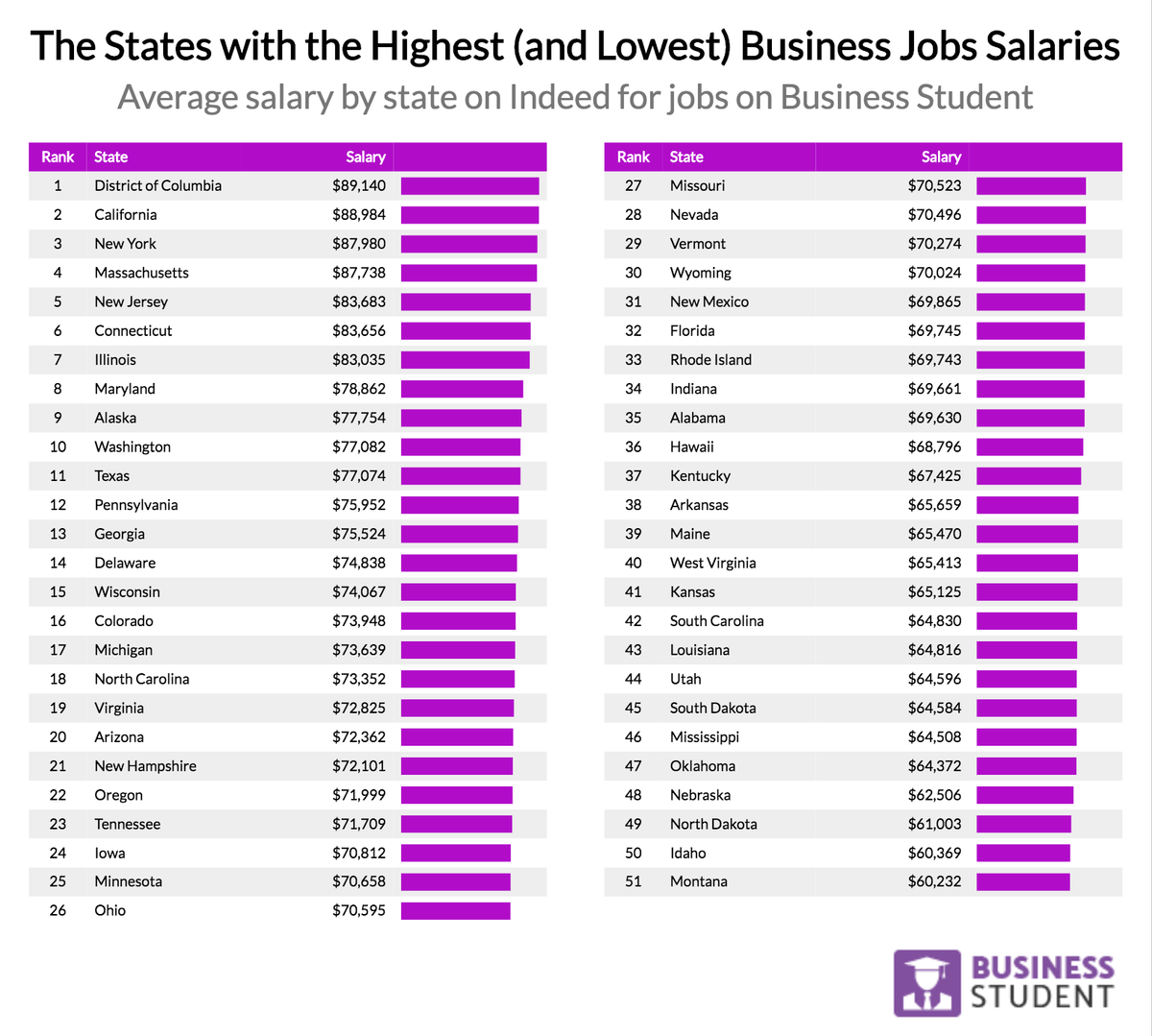 Next, how much do business salaries vary by city? Next, we analyze the average business salary on the 215 largest job markets we track. The chart below shows the cities with the highest and lowest salaries: 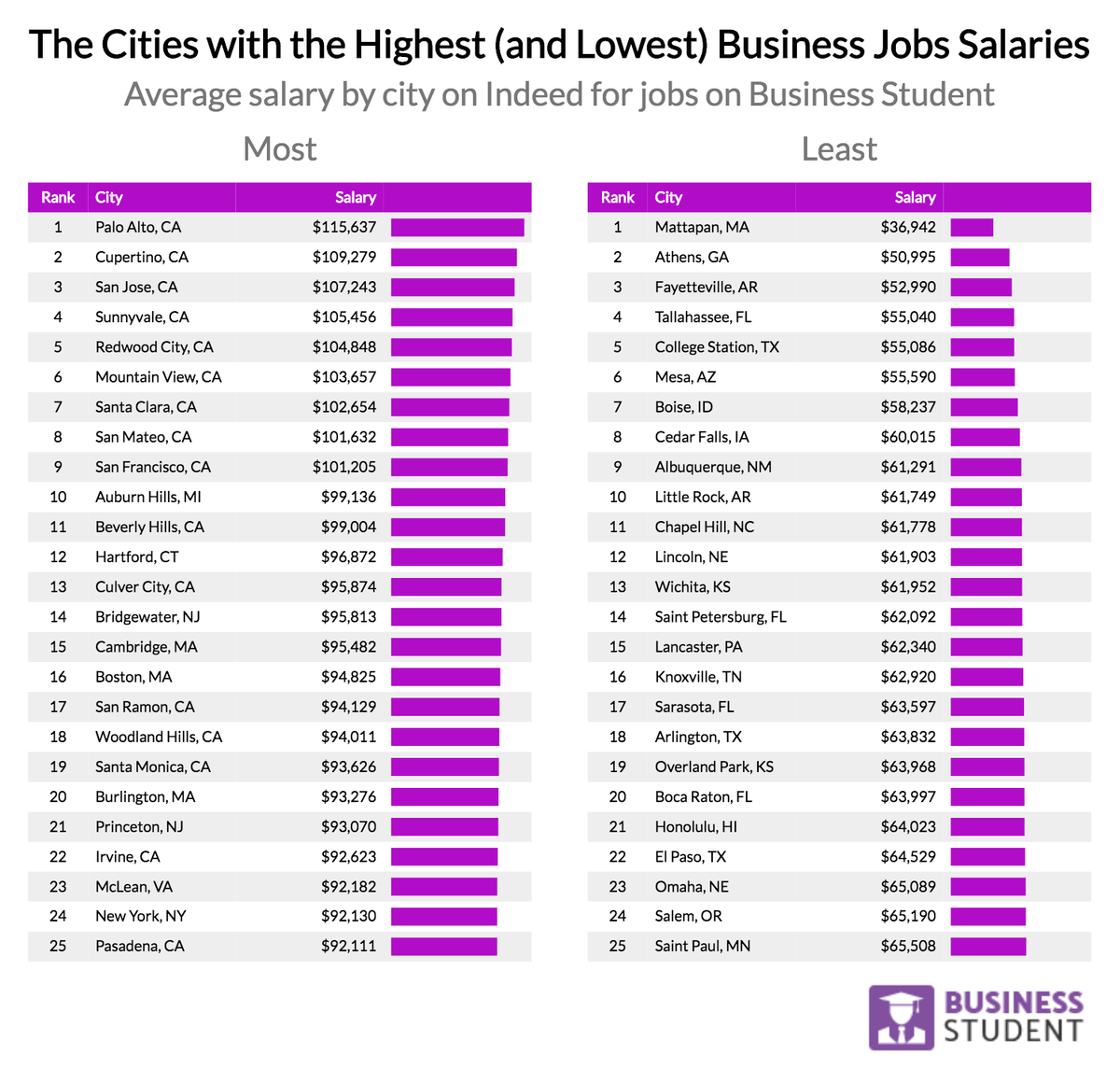 Almost unbelievable, the top nine highest paying cities for business jobs are all in the San Francisco Bay Area.

However, places that pay a lot of money also tend to be very expensive. We were curious, after you have to pay your rent, how much of your salary is left for anything else?

Below, we show the average salary by city, the average monthly rent for a two bedroom apartment according to Rent Jungle, and how much money is left over on an annual basis. For it, we looked at the top 65 largest markets on our site (excluding Athens, GA where there was no rent data available).  Keep in mind this is a preliminary analysis that doesn’t include taxes, child care, partner-earnings, or other factors that can influence cost of living. 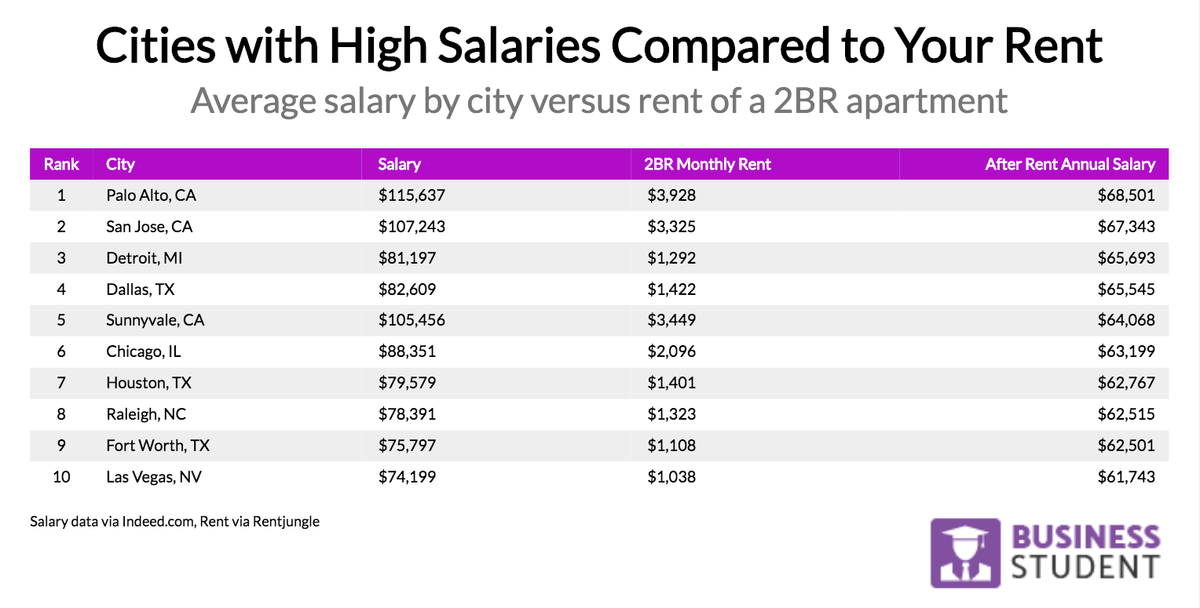 The cities where you have the most money leftover after rent are a mix of ones with high salaries (Palo Alto, San Jose, Sunnyvale) and ones with decently high salaries but low rents (Detroit, Chicago, Las Vegas). Considering that some of the states these cities are in have relatively high state income taxes (California) and others have zero state income tax (Texas, Nevada), further analysis should include taxes and other expenses.

And which cities do you have the least money leftover after rent? Below are the top ten: 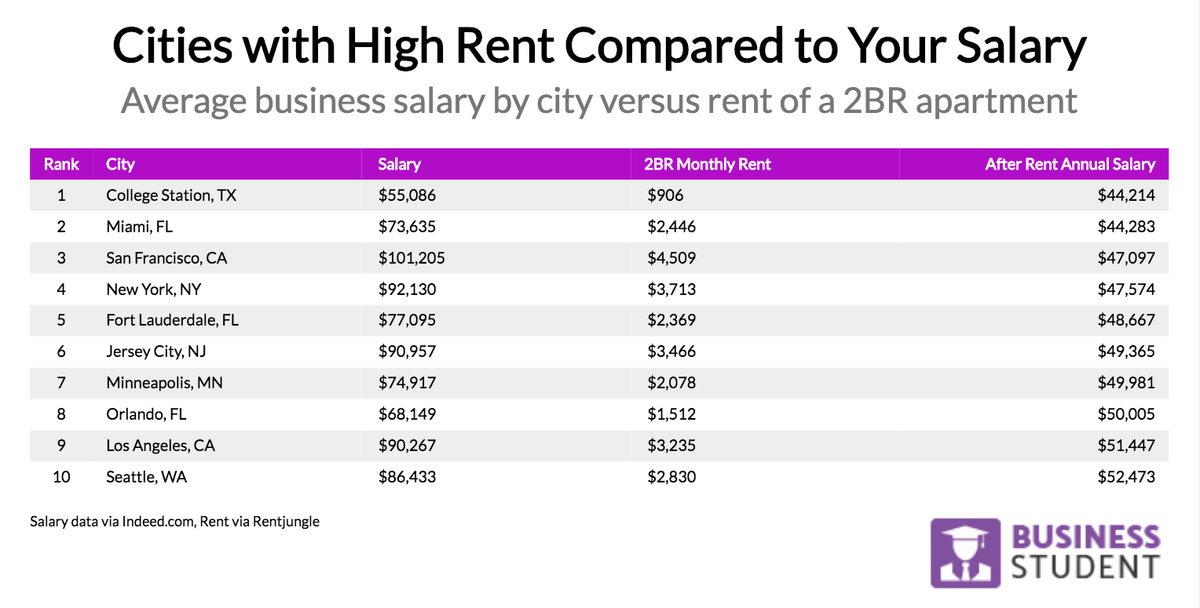 The places where most of your paycheck goes to rent is actually cities with high salaries but very high rent. Only College Station and Orlando have relatively low rent and make the list because of low salaries. Most of the other cities are places like San Francisco with high salaries but exorbitant rent ($4,509 for an average two bedroom apartment rental).

There is a huge variety of business jobs out there with an equal variance in salaries. Not all jobs pay a lot, but some do, especially in California, New York, Massachusetts and Washington, DC.

However, cities that pay a lot in salaries also typically have very high cost of living. The city with the highest business salaries is Palo Alto, but it’s also a place with some of the highest property prices in the country. Additionally, some places like San Francisco and Los Angeles do have high salaries, but you don’t take home very much money after your rent.

Curious how much money you’ll have leftover from your paycheck after you pay rent? Here’s the list of all the cities we analyzed: