The Places in America Where Diabetes Rates Are Increasing the Fastest 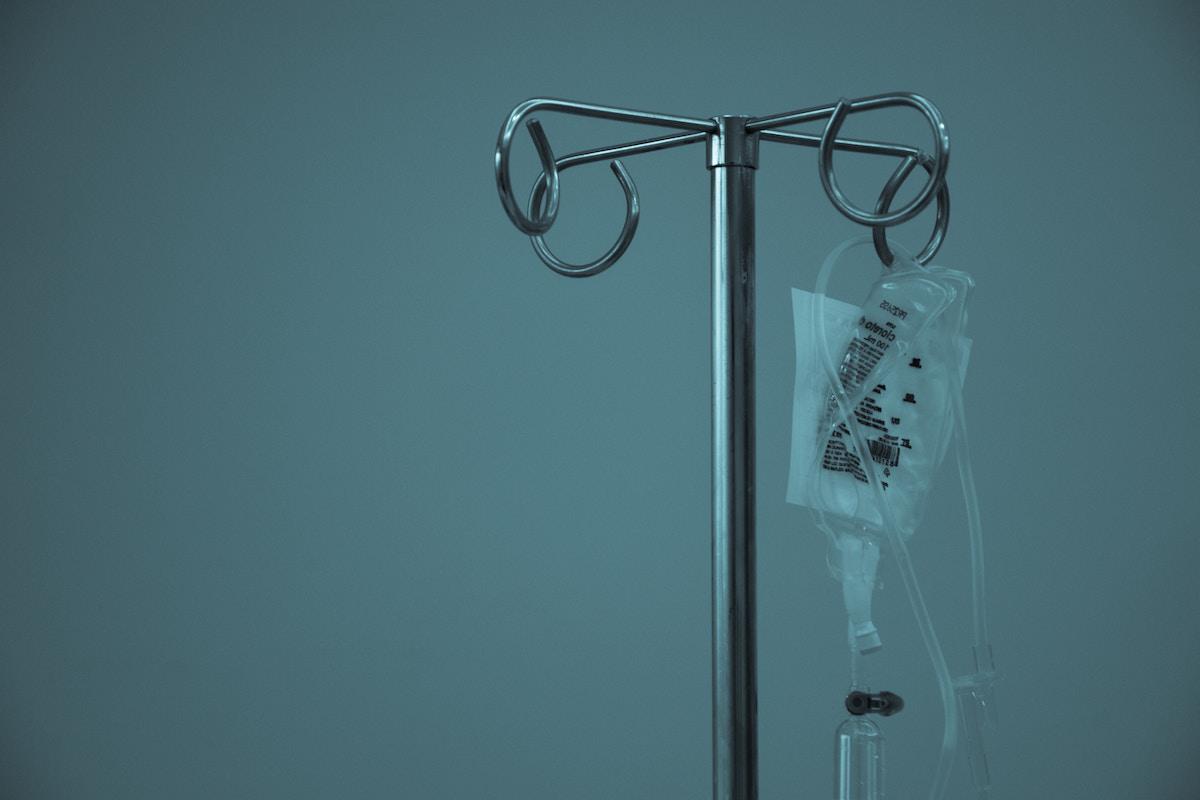 Today, over 30 million Americans suffer from the disease, 71 thousand limbs are amputated each year due to its complications, and it costs over $300 BN each year.

And it’s about to get worse. In every part of the United States, it’s expected to get costlier and more pervasive. Given that much of the treatment of diabetes and its prevention is up to the patient, managing one’s mental health is inextricably linked to improving diabetes outcomes. We thought we’d investigate the data further.

Along with Priceonomics customer PsyDPrograms.org, we decided to analyze data from the Institute of Alternative Futures which has projected diabetes rates by state and major metro in the US from 2015 up to 2030.  According to this analysis, the diabetes rate will increase 38% in America. By 2030, the state with the highest rate of diabetes will be West Virginia, where over 20% of the population will be afflicted. The state with the lowest projected diabetes rate is Utah where just 10% of people are projected to have the disease. Among major metros examined, Miami is projected to have the highest diabetes rates and Minneapolis the lowest.

Before diving into the results, let’s review the data and methodology that underlies this report. The data comes from the Institute for Alternative Futures, an organization that forecasts future trends and studied this issue in 2015. For our purposes, we looked at the number of both diagnosed and undiagnosed cases of diabetes in a given location compared to the overall population there to calculate the diabetes rates across America.

As for 2015, 11.1% of Americans have diabetes. That unfortunately is as low as it’s projected to get: 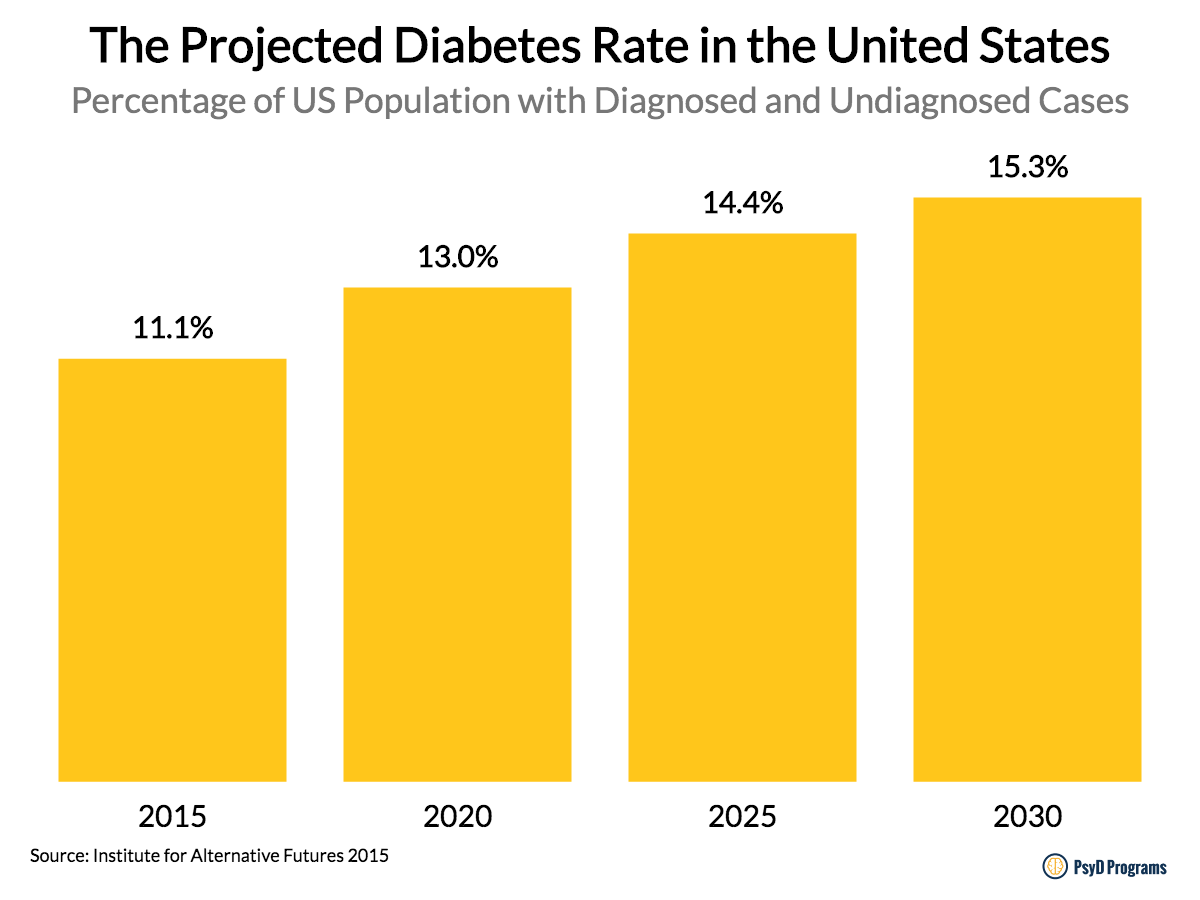 By 2030, the diabetes rate in America is projected to rise by 38% to reach 15.3% of the population. Considering the latest estimates from the American Diabetes Association put the economic cost of disease at $327BN per year in America, the economic and human toll of the disease will continue to rise and deepen the epidemic.

By 2030, how will the diabetes landscape look across America? The next chart shows the projected diabetes rate by state across the country: 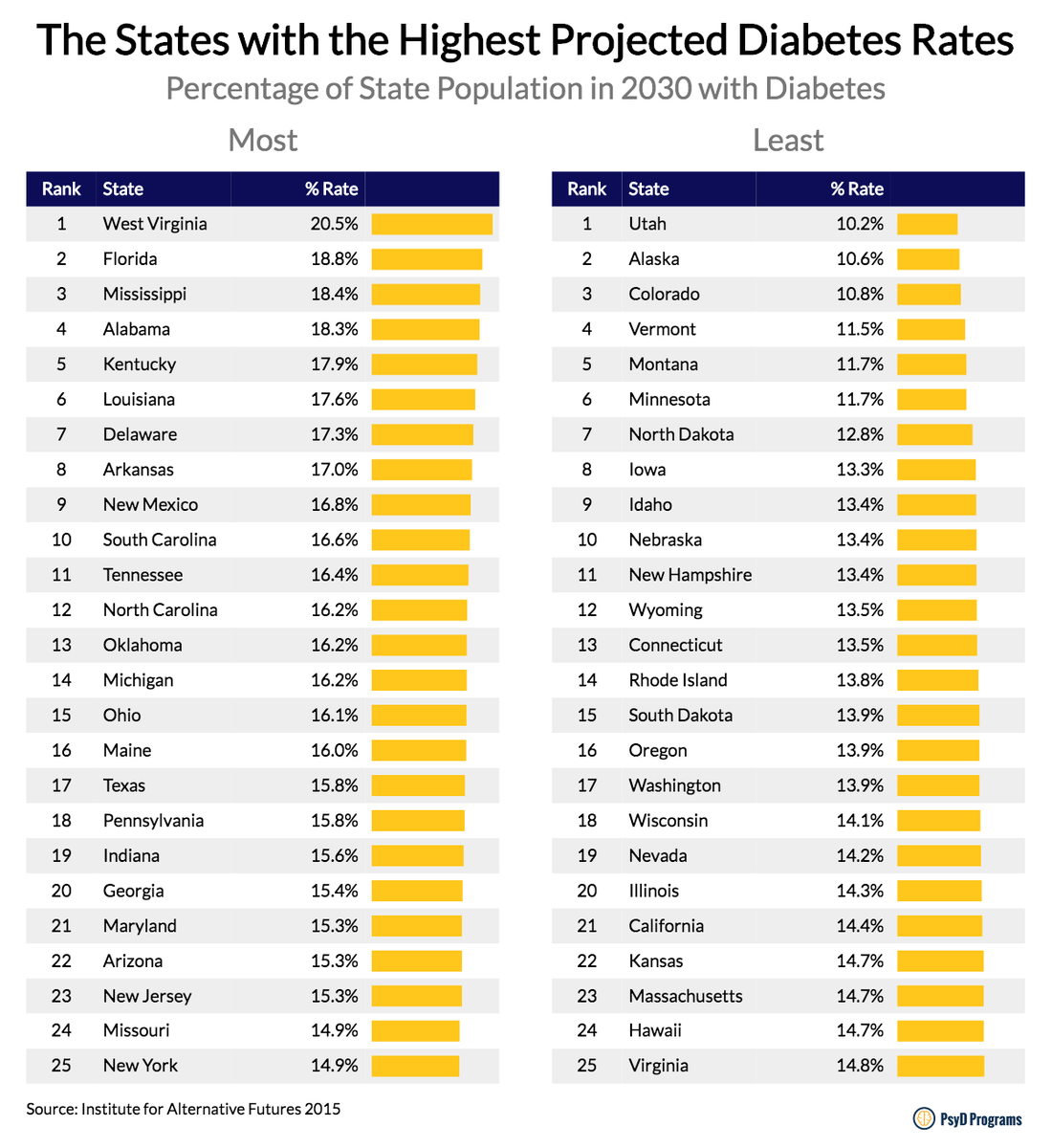 By 2030, over 20% of West Virginians are projected to have diabetes, a level amounting to a public health catastrophe. Mississippi, Florida, and Alabama are the states with next highest rates of the disease. In fact, the American South has a virtual lock on all the top places where diabetes will be an epidemic in 2030.

On the other hand, the projected diabetes rate in Utah is 10.2%, the lowest in the country. While that’s still a significant portion of the population, it’s half as much as the rate in West Virginia. Virtually all the top 10 places in the country with the lowest diabetes rates are predominantly rural environments.

Not only will West Virginia have the highest diabetes rate in 2030, but it’s projected to grow the fastest. The next chart shows the top ten states with the highest projected growth in diabetes between 2010 and 2030:

Over approximately the next fifteen years, the diabetes rate will increase nearly 40% in these states. With the exception of Ohio and Delaware, all these states are again located in the South. The CDC notes that areas with lower levels of education and higher obesity rates tend to have higher rates of diabetes. 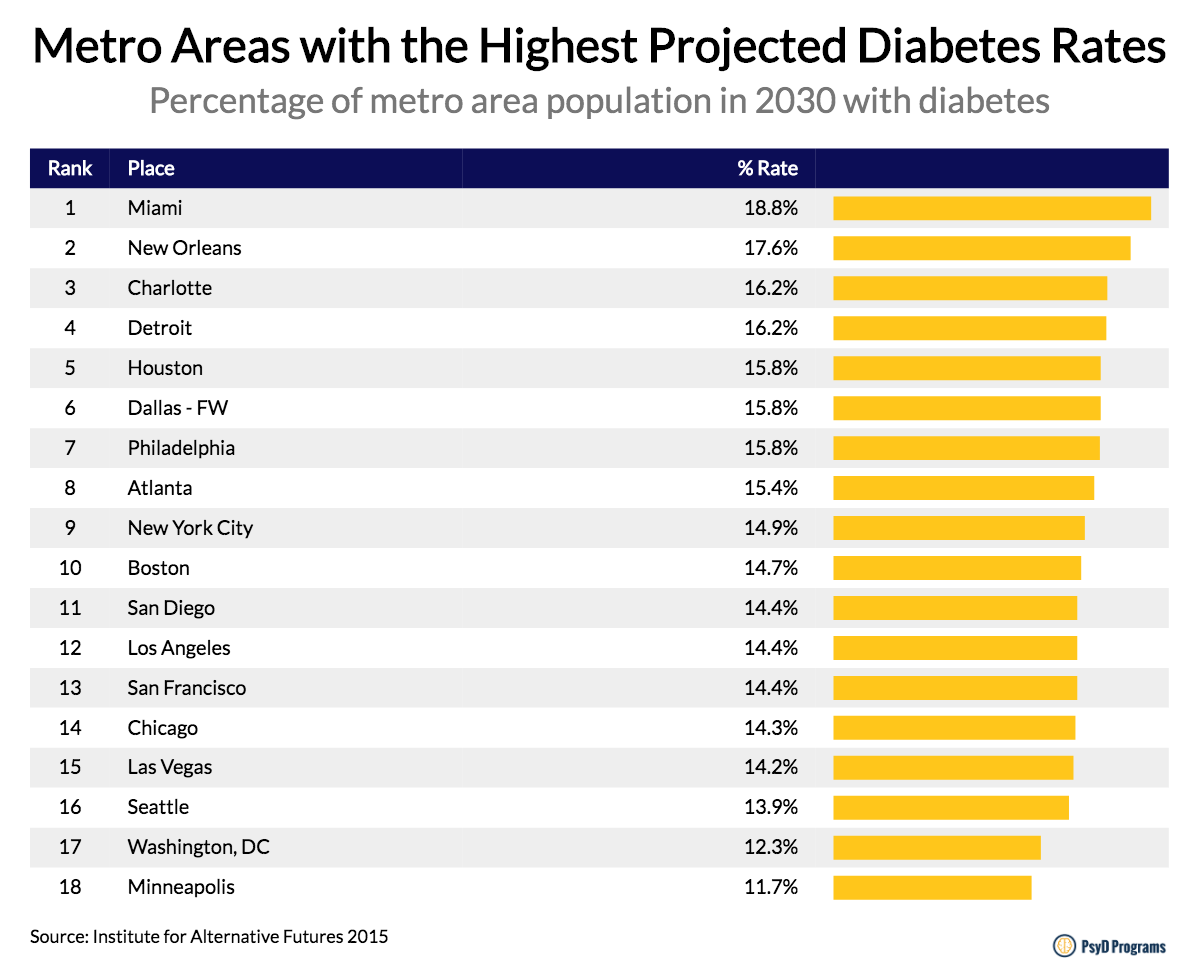 By all accounts, diabetes has become an epidemic in the United States, and it’s projected to get much worse. Today over 30 million people have diabetes and another 70 million have “pre-diabetes,” a condition that progresses to diabetes if not treated within 5 years. By 2020, approximately 20% of the population in places like West Virginia, Mississippi, and Florida are projected to be diabetic. Even in the places where diabetes is expected to be less prevalent like Utah, still over 10% of the population will have the disease.

The human and economic toll of a single case of diabetes is staggering. Reduction in quality of life, additional health complications associated with the disease, psychological trauma, amputation of limbs and ultimately premature death are all results of diabetes. At the same time, the rising cost of insulin and treatments for the disease and its complications put a huge economic toll on society. Solving the economic, physical, and mental health aspects of this disease is among the most important public health challenges we face in the United States.