The Places with the Most (and Least) Police Shootings in America 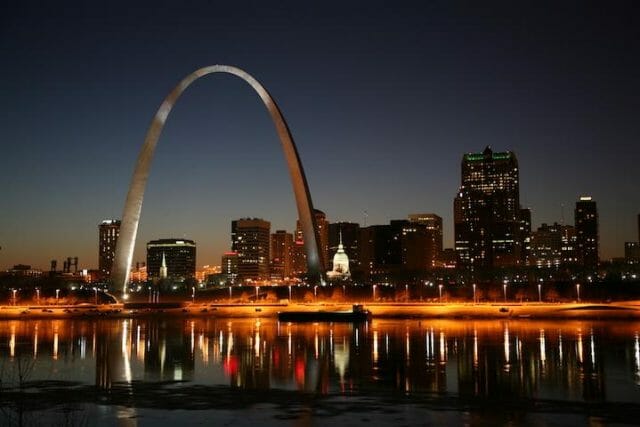 With the advent of body cameras and ubiquity of smartphones, videos of police shootings have brought the reality of the topic to the general public in a visceral way. Through social media and news reports, we often see these acts take place and make our own judgements on how justified the lethal use of force was.

But what does the data say about police shootings? How common is it for police to use lethal force via gunshot?

In this analysis, we worked with Priceonomics customer Federal Charges to analyze data from Fatal Encounters, a site that catalogues police killings from 2000 to 2018. We focus solely on shootings (which makes up 71% of all fatalities, death by vehicle makes up most of the balance) in the United States and compared it to the population numbers from the 2010 Census to calculate the death rate. For any city based analysis, we looked at the top 100 largest cities by population.

St. Louis is the city with the most per capita police shootings in America, followed by Orlando and Las Vegas.  On the flip side, New York City has the fewest police shootings among large cities in America, where death by police gunshot is incredibly rare compared to other big cities. Demographic groups that are shot by the police far more often than their population size would predict are Men, Native Americans and Black Americans.

And while police shootings generally correlated with how violent and dangerous the city is, some places like Orlando, Las Vegas, Miami, and Bakersfield have a high level of police shootings for being relatively safe cities.

Fatal Encounters, a website created by journalist and professor D. Brian Burghart, has assembled a detailed database of deaths caused by encounters with police officers in America. The searchable and downloadable database has demographic information about the deceased as well as the location of the death.

We looked at all shooting deaths from 2000 to 2018 year to date and compared that to the population from the 2010 Census of the one hundred largest cities in America. Which cities have highest rate of fatal shootings by the police and which have the lowest? 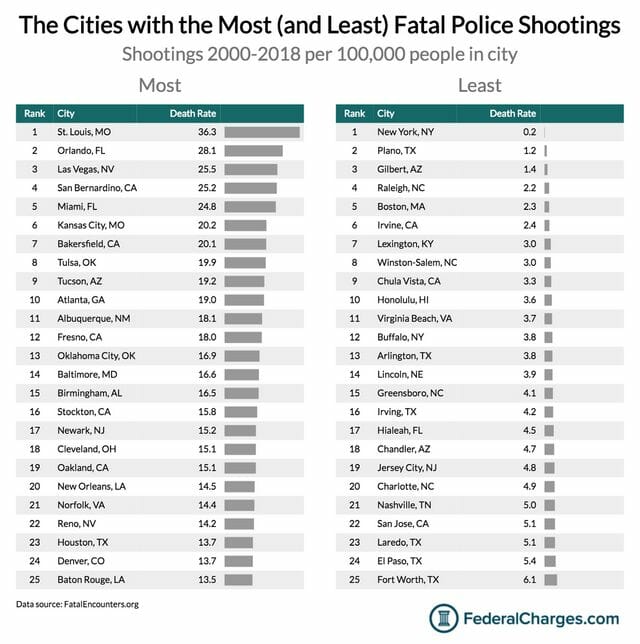 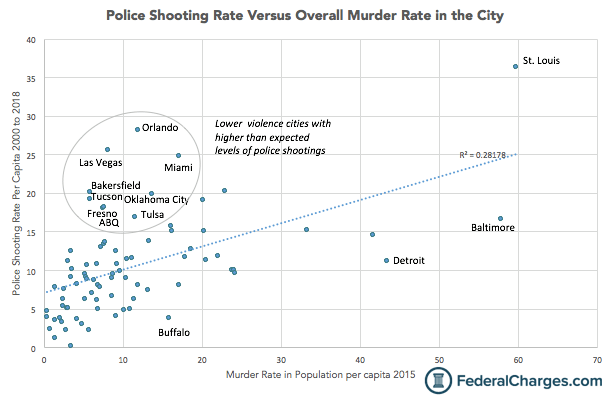 What this analysis also highlights is a cluster of large cities with relatively low levels of violence, but high levels of police shootings (these are the cities high above the line in the prior chart). Bakersfield California, for example, has the 6th highest rate of police shootings, but is a relatively safe city (low murder rate). 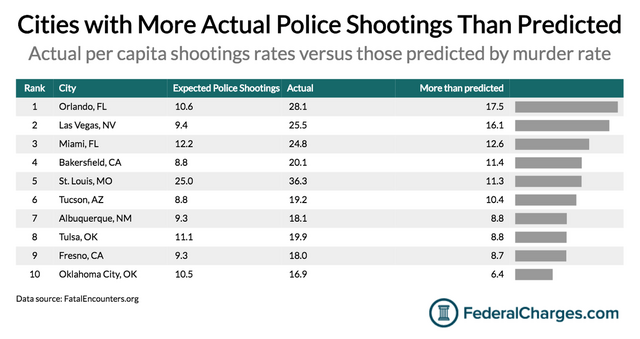 There are also violent cities (high murder rate), where the police shooting rate is lower than you’d expect (below the line). Buffalo (NY), for example, stands out for having relatively low levels of police shootings compared to the general murder rate. 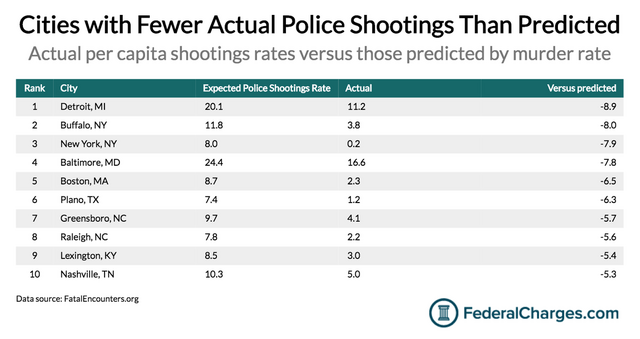 Next, which states have the highest (and lowest) rates of police shootings? 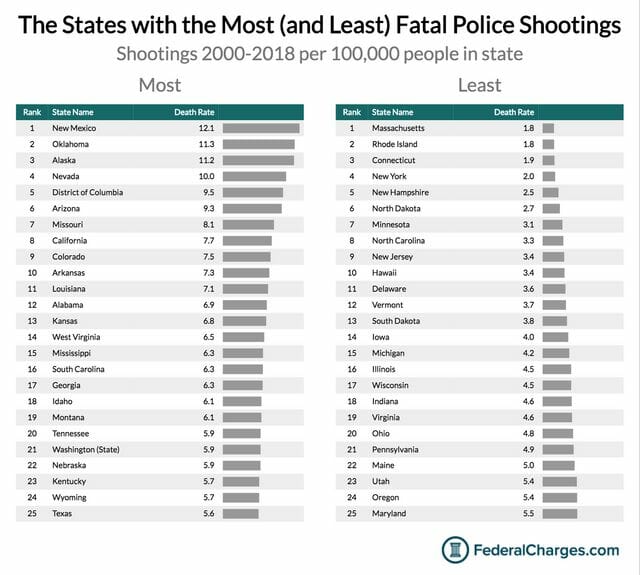 When taken together, the state of New Mexico has the most per capita shootings over the last eighteen years. New Mexico is followed closely by Oklahoma and Alaska as the top three states with the highest police shooting rates. In perhaps the clearest geographic pattern, states in New England take all of the top 5 spots with the fewest fatal police shootings. 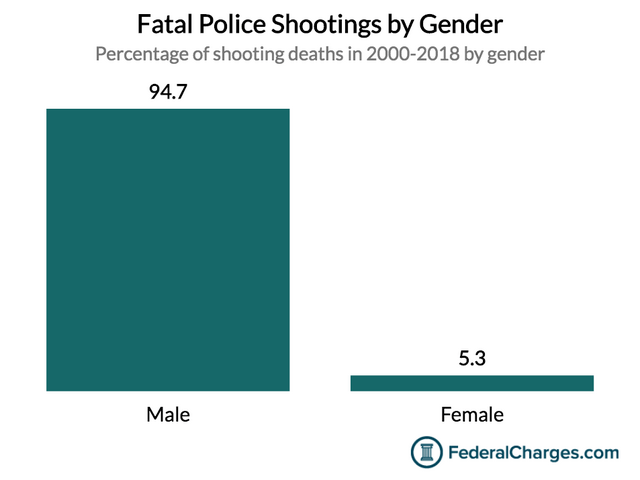 Finally, how old are those who die from police shootings? The chart below shows the frequency of death by age: 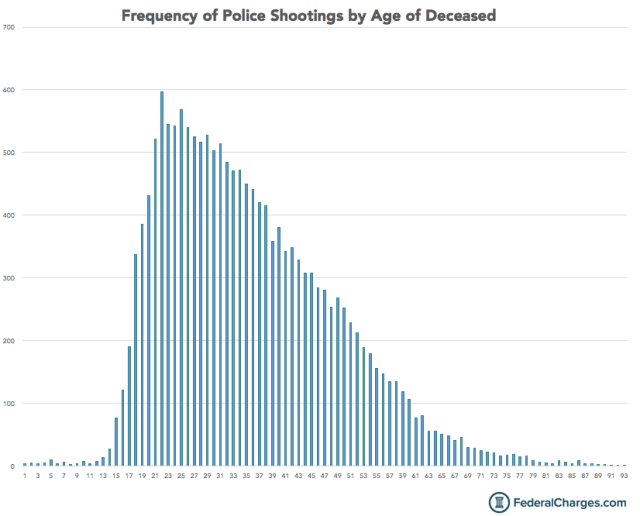 Appendix: The Rate of Police Shootings in the Top 100 Largest Cities in America