The Price of Beer in the NBA

How much does it cost exactly? Well, Team Marketing, a sports marketing firm, assembled the data about how much each of these items cost for professional basketball. 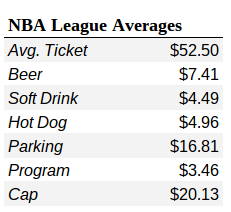 The average price of the cheapest beer at each stadium is $7.41. That’s not very cheap beer. So do teams with expensive tickets also charge you more for beer? Yep.

Below we plot the average ticket price versus the price of beer at each NBA team’s arena: 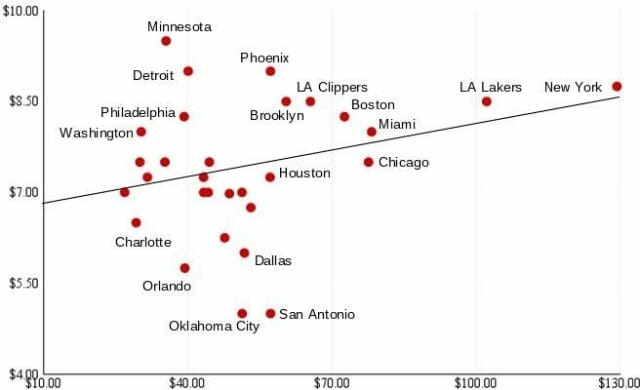 Some places have expensive tickets and beers. These tend to be the marquee teams with national followings like the Lakers, Knicks, Heat, Celtics, and Bulls. If you want to see them play and get drunk, it will cost you.

But there are a bunch of places that sell relatively affordable beer. San Antonio, Oklahoma, Orlando, and Dallas sell cheapish beer. Their tickets are also on the lower end of the price spectrum. On the other hand, Minnesota and Detroit offer relatively affordable tickets, but then really gouge you on the beers.

According to this data, it might be a good time to become an Oklahoma City Thunder fan if you like cheap beer, affordable tickets, and a team that’s leading its division.