The Psychology of the Self-Appointed Genius 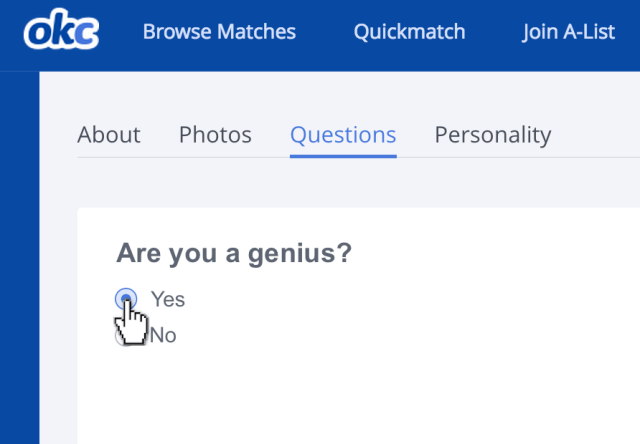 There’s nothing wrong with thinking that you’re smart. You probably are pretty smart, and we commend your healthy esteem and belief in yourself. But healthy self esteem has its limits. Those limits were pushed a couple years ago, when dating website OkCupid revealed how thousands of its users had answered one particular question in a survey to measure partner compatibility: 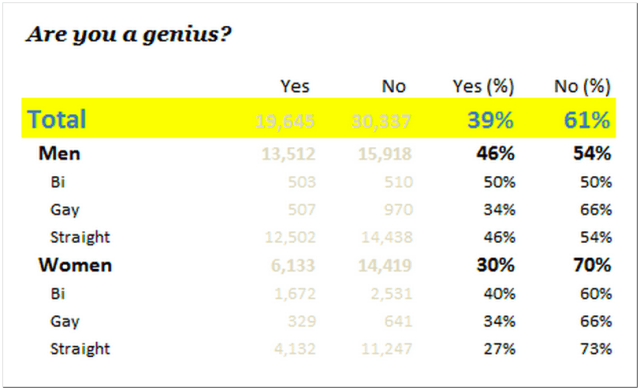 “Yes. 2 in 5 people (and nearly half of all men!) think they are one in a thousand,” OKCupid’s blogger Christian Rudder wrote. “You do the math: that’s 100% melted.”

What the hell is going on here? Science suggests these OKCupid users weren’t lying maliciously, they were just collectively demonstrating a very human phenomenon: the better than average effect.

Lake Woebegon is the Human Condition

This “melted” math pops up everywhere. As individuals we are very, very bad at evaluating ourselves — particularly when comparing ourselves to our peers. “People, on average, tend to believe themselves to be above average,” David Dunning, Chip Heath, and Jerry M. Suls wrote in a survey in 2004, “a view that violates the simple tenets of mathematics.”

When asked to rate themselves, most people say they are more virtuous, honorable, capable, competent, talented, compassionate, understanding and sympathetic than others. These self-assessments correlate extremely loosely to objective or peer assessments of their skills or abilities. “In general, people’s self-views hold only a tenuous to modest relationship with their actual behavior and performance,” they write.

The paper goes on to list instances of people overestimating their abilities at all kinds of skills.

70% of one million high school seniors surveyed said they had “above average” leadership skills (only 2% said their skills were “below average.”) 60% rated themselves as in the top 10% in “their ability to get along with others”, 25% rated themselves in the top 1%. This is not quite, but almost as extraordinary as the 39% of OKCupid users who thought they were at least in the top 2%.

In a 1970s study, 94% of college professors rated themselves as doing “above average” work (and 2/3rds rated their performance in the top quarter).

Other examples include motorcyclists, who think they’re less accident-prone than the typical biker, and business leaders, who think their firm is more likely to succeed than the industry average.

This effect is often called the “better than average effect.” It’s also called the “above average effect,” “superiority bias,” “leniency error,” and the “Lake Wobegon effect” — named after Garrison Keillor’s fictional Minnesota town where, “all the women are strong, all the men are good-looking, and all the children are above average.” 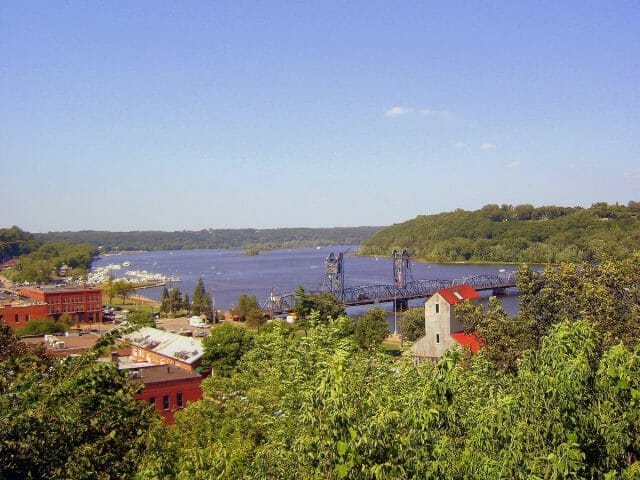 A small town in Minnesota

Overestimating your abilities can do wonders for your ego, at least temporarily. But how illusory superiority survives repeated evidence to the contrary is a better question. As one paper puts it: “One puzzling aspect […] is how the incompetent fail, through life experience, to learn that they are unskilled.”

Dunning, Heath, and Suls point out research that suggests that unskilled people avoid attempting things they suspect they’re very bad at; and they selectively process feedback to preserve their ego. The effect is also amplified when the trait a person is asked to rate is poorly-defined, and the feedback less straightforward.

Psychologists think that one of the biggest mechanisms driving the effect is that, when you’re bad at something, it’s likely that the deficits that prevent you from improving also prevent you from realizing how bad you are. “If people do not understand the rules of logic,” they write, “not only will they make logical errors, but they will also not recognize that their arguments are logically defective—or that any else’s argument is logically superior.”

People with low IQ tend to overestimate their intelligence, (people with high IQ tend to underestimate their intelligence). In one study, college students in the bottom quartile on an exam, “walked out of the exam room thinking that they outperformed a majority of their peers.” And in another, debate teams in the bottom quartile in a tournament thought they were winning 59% of their matches, when they were only winning 22%. (If that clears up why your high school debate team never won regionals, even though you thought you were doing pretty well, we’re sorry.) 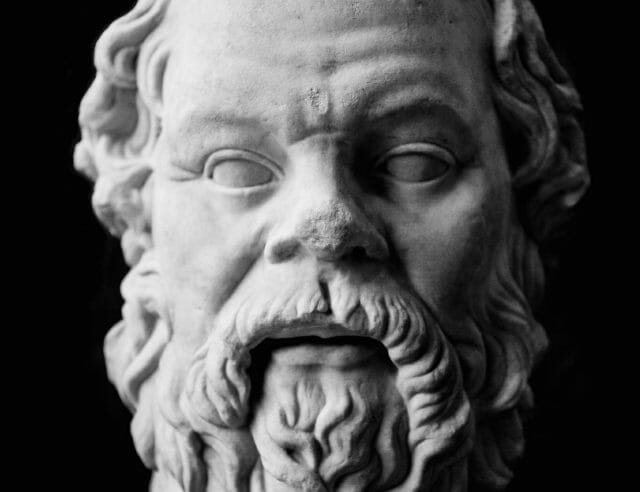 Socrates, who espoused the wisdom of being aware of one’s own ignorance when he said, “I know only one thing: that I know nothing.” (cropped photo by Derek Key)

The phenomenon of people being too incompetent to recognize their own incompetence is an example of the Dunning-Kruger effect, discovered by David Dunning and Justin Kruger.

Then, weeks later, they gave the subjects the tests of five of their peers to “grade.” When the people in the top quartile reviewed the work of some of their peers, they ranked themselves higher and more accurately. This was consistent with Dunning and Kruger’s theory that the people who are best at something underestimate their ranking because they overestimate the group: because the tasks were so easy for them, they assume the tasks were also easy for everyone else. Actually seeing other people’s work corrects this.

Peer grading did not help people in the bottom quartile rank themselves more accurately (lower). They weren’t skilled enough to realize the tests they were grading were better than theirs. As Dunning and Kruger put it, “the incompetent cannot recognize competence in others,” which prevents them from learning from them.

Then the researchers conducted the study again, with a different group of participants. They had them complete a logic test, asked them to estimate their ranking, then gave half of them a short training in logical reasoning. Then they were allowed to revist their old test and correct their answers. They were also asked to rank themselves again. The lowest performers’ skills improved with training, but they (accurately) rated their ability lower.

“[This study] suggested that one way to make people recognize their incompetence is to make them competent,” Dunning and Kruger wrote. (In 2000, this research won Dunning and Kruger the premier award for quirky research, the “Ig Nobel” Prize.)

Dating and the Motivation to Self-Enhance 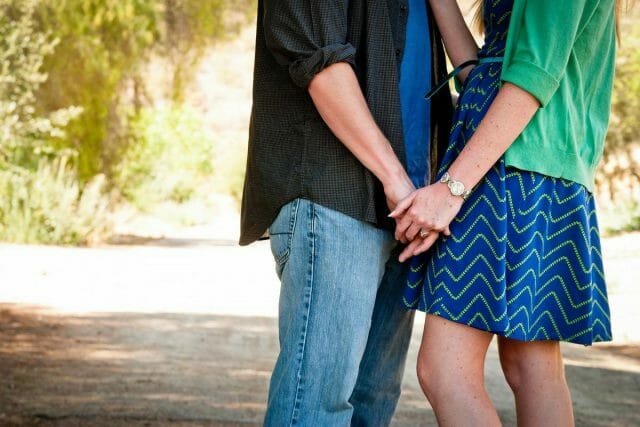 Which brings us back to the curious case of the OkCupid “geniuses”. The psychology of the better than average effect says that many of these people have very good reasons to think they’re very, very smart: Intelligence is a pretty abstract quality, and people probably don’t go around telling them that they especially, are “not a genius.” They might make a habit of avoiding things, activities, and people that challenge their concept of their own intelligence. And, when it comes down to it, they’re not smart enough to realize how much smarter than them really, really smart people are.

The synergy of these things might be enough to make 39% of the individuals of any population consider themselves “geniuses”. But, as yet another another study showed, there’s one more piece to this puzzle that might be very relevant:

“The [better than average] effect increases in magnitude after participants experience a threat to their feelings of self-worth.”

In the study, people were more likely to rate themselves even higher with respect to a bunch of desirable traits, including intelligence, and rate others even lower, when they had just been told they’d scored in the bottom quartile on a bogus test of a made-up intellectual ability, (which the researchers called “integrative orientation”).

As many of us have experienced first-hand, the search for romantic love has its pitfalls. And online dating can be especially rough on an ego. Between the profile-crafting, the answering of dozen to hundreds of questions, and the sometimes painstaking and fruitless task of messaging others — not to mention the humility of being on a dating website in the first place — there’s plenty in the experience to make someone doubt their self-worth. For thousands of OKCupid users, answering “yes” to “Are you a genius?” might have restored a little bit of that ego. Whether it was accurate or not, they believed it.