The Rise of Driving to Work 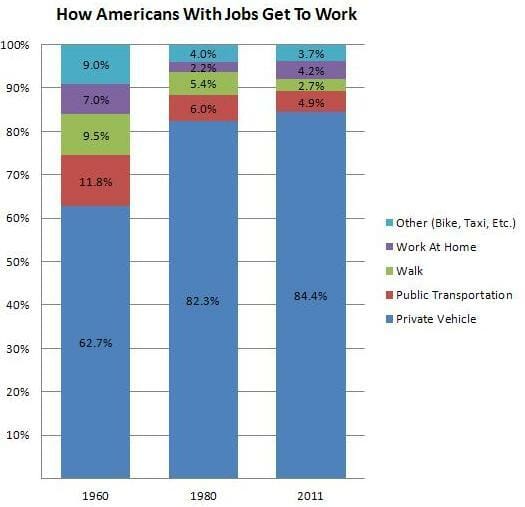 Over the past 50 years, the way Americans commute has seen one dominant trend: toward commuting alone by car.

The percent of Americans who drive a private vehicle to work has increased significantly since 1960. The rapid suburbanization of the United States during the 1960s and 1970s, which some attribute to White Flight after the Civil Rights Act was signed in 1964, may be responsible. America’s love affair with the car certainly didn’t help.

All these commuters could be carpooling, but as Planet Money points out, the percentage of Americans who carpool decreased from 20% to 10% over the past 30 years. (Despite all the new carpool lanes built.)

All other forms of commuting became less common from 1980 to 2011 except for working from home. So the only categories that didn’t continually decrease over the past 50 years were “Private Vehicle” and “Work At Home.” We’ll have to wait and see whether the movement for all things green pushes up the numbers of people biking, walking, and using mass transport. But environmental efforts are fighting against longtime commuting trends.

American life has often been characterized as individualistic, spread out, and private; this graph seems to bring that point home. Americans choose to drive themselves to work. Public transportation, walking, biking — any form of commuting that may lead to contact with strangers — do not appear to be significant aspects of the American experience. The rise of social media in the United States appears ironic from the angle. As our lives have become more atomistic and private, our desire to publicly share information may be at an all-time high.