The SEO Dominance of RetailMeNot 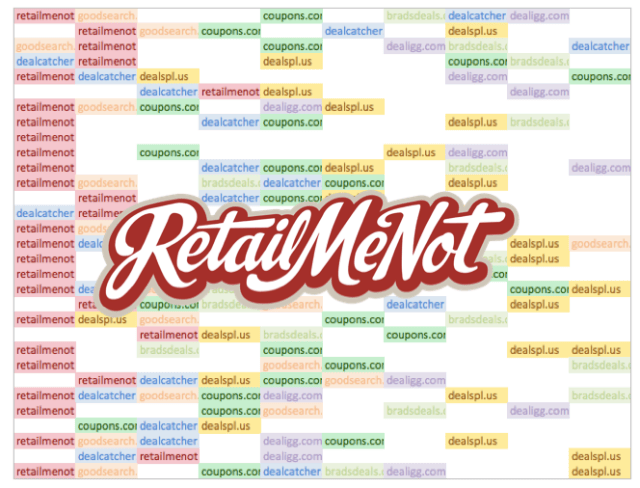 You’re about to buy a delightful pair of pants from your favorite online store when you notice a small box near the checkout button labelled “Promo Code.” Hmmm, you think, I was about about to pay full price for these slacks like a complete sucker when there are discounts to be had. Miffed, you do a quick Google search for coupon codes.

When you search for an online coupon, more often than not, you’ll land on the promo code aggregation site RetailMeNot. RetailMeNot is a publicly traded company that is worth $1.8BN after its IPO last year. In 2013, the company did over $200 million in revenue; RetailMeNot has turned coupon codes into big business.

According to company filings, RetailMeNot currently gets 63% of its traffic from search engines and 96% of its revenue from affiliate commissions on sales. The key factor in RetailMeNot’s success is reliably topping the Google search results for coupon code related queries, and then turning that traffic into referral fees.

Given Google’s dominance in search, conquering its results page can be incredibly lucrative. But in RetailMeNot’s case, it’s also a lot of eggs in one basket. A shift in the Google search algorithm could cause the entire company to collapse. Traffic would plummet, leading to declining revenues and a flailing stock price.

Priceonomics Data Services analyzes SEO (search engine optimization) risk of publicly traded companies for our hedge fund customers. We crawl the web to see how these companies’ search engine results are improving or deteriorating. For SEO-driven businesses like Zillow, Yelp, and TripAdvisor, this is an important leading indicator of their fortunes.

Since RetailMeNot is an SEO-driven company par excellence, we thought it would be interesting to showcase some of the work we do. Let’s review 1) The clever way RetailMeNot makes money 2) Just how important search engine traffic is to its business, and 3) Exactly how dominant the company is at winning the SEO game for coupon codes.

Have you ever noticed that when you search for flights on travel sites like Kayak.com, a bazillion popups come up from competitors like Expedia.com? WTF Kayak, how the heck are we supposed to deal with four simultaneous popups? What kind of user experience is that? 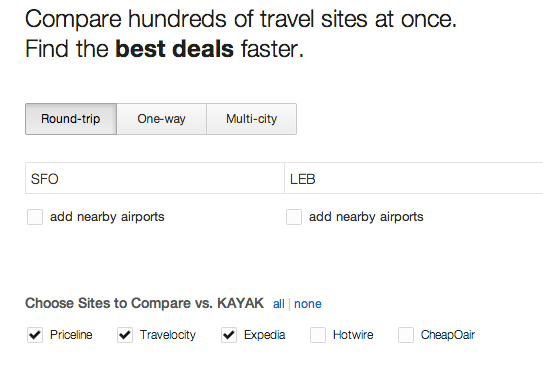 Kayak and similar companies blitzkrieg you with popups for one reason: to place tracking cookies in your browser. From your perspective, the Expedia.com window is an infuriating popup. From Expedia.com’s perspective, however, Kayak has sent them some referral traffic. If you visit Expedia.com and make a purchase in the next month or so, Kayak will get an affiliate fee because of the cookie it placed in your browser.

RetailMeNot describes how this works in their annual report:

RetailMeNot made $210 million last year, and most of it came from affiliate fees for being attributed as the last click:

Let’s walk through what that means for RetailMeNot with an example. Say you’re going to make a purchase on Amazon, so you Google “Amazon coupon.” You click the RetailMeNot link in the search results, which takes you to a page for “Amazon coupons.” 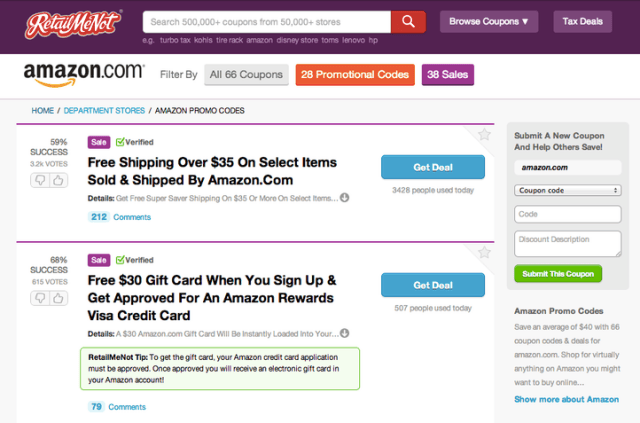 This unleashes a brief, inexplicable flash on your screen. Like you could swear something funny just happened, but you’re not sure what.

If you look at your tabs, you’ll notice Amazon.com was opened in a background tab with an affilate tracking cookie in the URL. So, when you buy something from Amazon, RetailMeNot gets a 4% commission no matter what you buy. 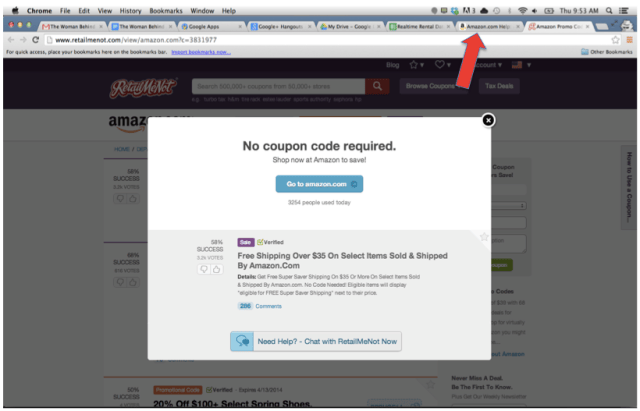 Where did that tab come from?

This glosses over some of the nuance, but paints the general picture of how RetailMeNot makes money. Get traffic, send traffic to retailers that’s attributed to RetailMeNot.com, and get paid. Sometimes the company has direct relationships with retailers who run coupon code campaigns with them. Other times, they might not have a direct relationship, but still make money through the company’s affiliate programs.

Is that a good deal for retailers? Well, on one hand, retailers are paying for performance – they only pay RetailMeNot when someone makes a purchase. On the other, someone Googling “Bed Bath Beyond coupon” probably intends to make a purchase at Bed Bath & Beyond. RetailMeNot is earning a commission on customers that retailers likely would have gotten anyways.

Whether RetailMeNot’s business model is parasitic is open for debate. Either way, SEO traffic makes RetailMeNot money. If it ever got less free traffic from Google search, that would harm its revenue.

How Much Traffic Does Google Send to RetailMeNot?

As mentioned earlier, RetailmeNot gets 63% of its traffic from search engines. It relies heavily on one partner, namely Google. But the company recognizes this and is trying to rely less on Google. Today, that means getting people to install its mobile app; the company had 13.7 million mobile app downloads as of the end of 2013.

Google traffic can be finicky. Google can change its algorithm or banish someone from the top spot instantly for unsavory behavior. Demand Media, a publicly traded company that got most of its traffic from Google, learned that lesson when Google’s “Panda” algorithm wiped out most of its traffic. Another example is Rap Genius, a site that was temporarily removed from Google’s good graces this year and saw its traffic plummet. 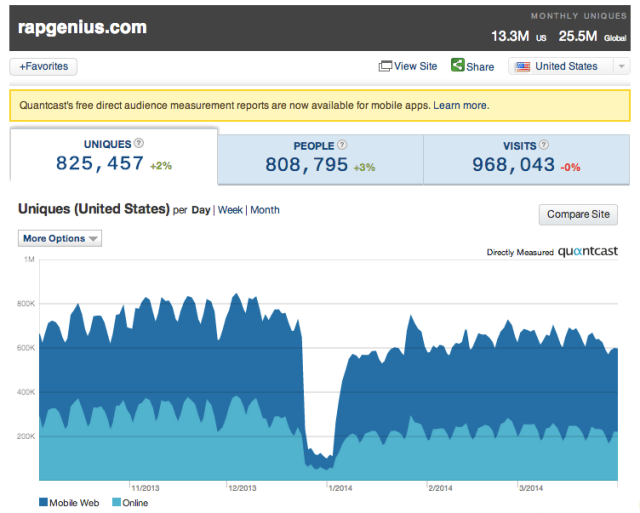 It’s worth noting that Google’s venture capital arm is an investor in RetailMeNot, but that’s not likely to make them immune from Google SEO risk (or if you take a less charitable view of this conflict of interest, maybe it is).

For public market investors in RetailMeNot, only one metric matters: how well RetailMeNot ranks in Google search results.

How well is RetailMeNot ranking in Google? Very well, thanks for asking.

Priceonomics is currently tracking RetailMeNot’s search engine results for 263 keywords — such as “Bed Bath Beyond coupons,” “Walmart Coupons,” and “Airbnb Coupons” — that we believe are important from the way the company promotes certain pages on its site. Google personalizes search engine results for each user, but you should be able to approximate this analysis by doing searches incognito.

RetailMeNot ranks first in Google search results for an astounding 187 out of the 263 keywords we track. Dealcatcher.com, the next closest company, only ranks first for 7 keywords. Coupons.com, another recent IPO in this space, only has the number one spot in the Google rankings a single time.

RetailMeNot is the top result 71% of the time, and it’s also very often the second or third result. We visualize its dominance of the prime real estate in SEO land in the below graphic that shows the top 10 companies in the Google search results for the first 50 keywords we’re tracking. We highlight RetailMeNot in red, its closest competitors in other colors, and all other sites in white. That’s a heck of a lot of red in the top spot. Customers searching these keywords are very valuable because they intend to make a purchase. RetailMeNot occupies most of this prime SEO real estate and knows how to efficiently monetize it through affiliate fees. It has built a billion dollar SEO empire.

We take no stance on RetailMeNot’s business model. (We like getting coupon codes too!) We also have no idea how the company achieved its SEO dominance. The company has no doubt put a lot of work into conquering Google.

But SEO is both RetailMeNot’s major strength and its achilles heel. There might not even be a precedent for a company dominating monetizable keywords so thoroughly for an extended period of time. At some point, Google will change the rules, RetailMeNot will trip up, or competitors will catch up. It’s not really a matter of if Google pulls the rug out from under you, it’s a matter of when.

Note: The data from this post tracking SEO performance of a variety of public companies is available for purchase through Priceonomics Data Services.