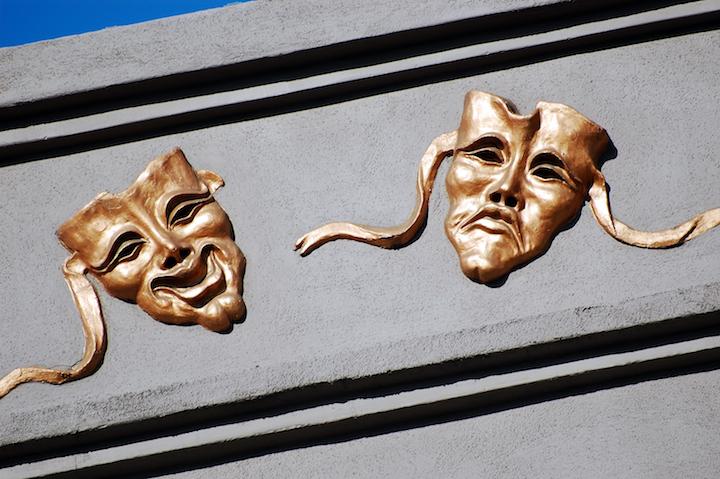 To smile or not to smile in a professional context? On one hand, a smile signals friendliness and approachability. On the other, a smile could indicate lack of seriousness.

We were curious about whether certain attributes are correlated with propensity to smile.  Are some countries "smilier" than other? Do some companies have smilier employees? Which positions tend to smile and what industries is smiling more common?

A few minutes on LinkedIn will reveal that users vary widely in their “smiliness” in their professional photos. Some people look pretty chirper, while others look fairly miserable.

We analyzed data from Priceonomics customer Snappr, who developed a Photo Analyzer tool that algorithmically assesses LinkedIn photo attributes like background, composition, and facial expression. One of the parameters, the smile score, measures tooth visibility and smile curve, and gives users a numeric assessment of how much they’re smiling.

We mined a database of tens of thousands of Photo Analyzer smile scores and anonymized information from the profiles they’re attached to, and identified the groups that are the most smiley — and the most stoic — on LinkedIn.

We found that the more connections you have, and the more recently you were hired, the more likely you are to smile in your LinkedIn photo. The users that smile the most hail from the U.S. and Australia, and belong to people-oriented industries like HR and recruiting. And the company with the smiliest workers is exactly the one you would suspect - Disney. And the least smiley employees? Verizon.

Smile scores vary widely by nationality: nearly 40 points separate the smiliest from the most serious countries. 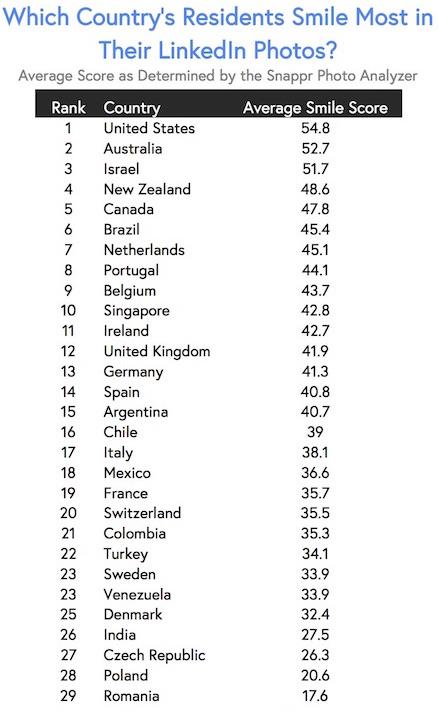 Perhaps not surprisingly, America, with its penchant for extroversion, is home to the smiliest members of LinkedIn. Residents of former Eastern Bloc countries (Romania, the Czech Republic, and Poland) have the lowest smile scores, as do residents of developing nations like India, Venezuela, and Colombia.

While smiliness varied by nationality more than by industry, there were clear trends in the propensity to smile by industry. Workers in people-oriented fields like recruiting, healthcare, HR, and hospitality were more likely to smile than workers in technical fields like computing, manufacturing, and logistics.

If people from different industries differ in their tendency to smile, what about people from different companies? Would the tool pick up differences in average smiliness by employer? To find out, we calculated the average smile score for all Fortune 100 companies that had at least 5 entries in the dataset. The results for the 17 companies that matched those criteria are charted below. 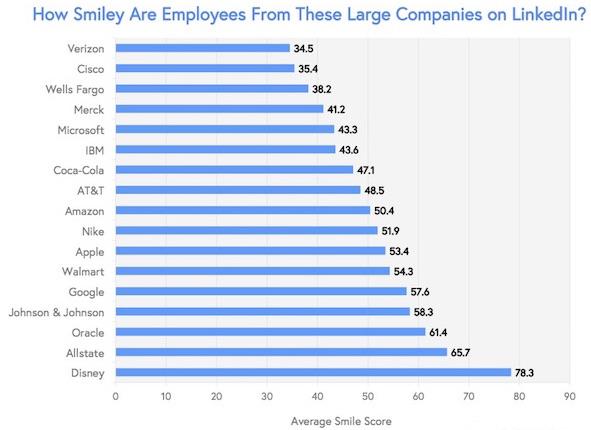 It’s fitting that people who work at the Happiest Place on Earth are also the Smiliest Members of LinkedIn. Disney became a massive conglomerate by acquiring brands like ESPN, Marvel, and Pixar, but it’s clear that despite this growth, it has retained its culture of hospitality.

Verizon and Cisco sit at the other end of the spectrum, with average smile scores around 20 points lower than the average for the U.S. This fits with our previous analysis of smile score by industry; some of the lowest smile scores belong to workers in telecommunications.

Aside from industry, we wondered whether the type of role a person has influences their tendency to smile in their headshot. We flagged entries in the dataset based on whether they belonged to members who described themselves as salespeople, company founders, or engineers, and calculated the average smile score for each group. They are displayed below alongside the overall average smile score. 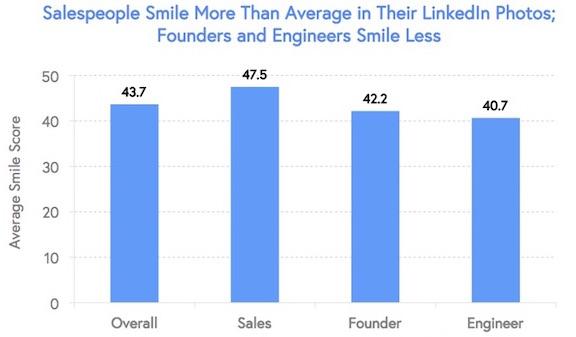 Salespeople smiled more than average, whereas founders and engineers smiled somewhat less than average. This fits well with what we found when we looked at smile score by industry: people-oriented professionals (like salespeople) tend to smile more in their professional headshots than do people from more technical fields (like engineers). 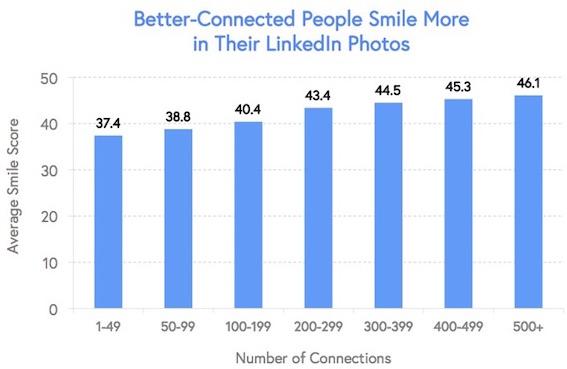 Indeed, there’s a positive correlation between smile score and number of LinkedIn connections. Nearly 10 points separate the smile scores of very well-connected people (with 500+ connections) from the people with the fewest connections.

Finally, we were curious about the relationship between seniority and smiliness. We broke the sample down by the amount of time a user had been in their current position and calculated the average smile score for each bin. We chart the results below. 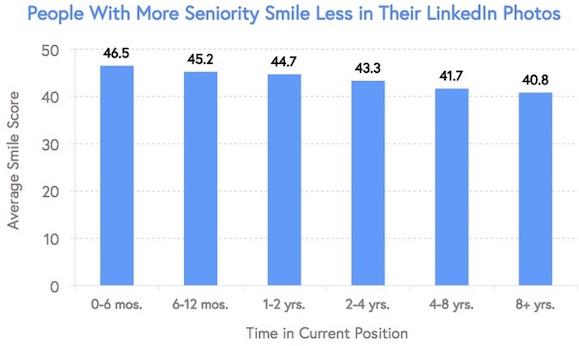 There’s a clear relationship between seniority and tendency to smile. Recent hires, who may be eager to make connections and advance in their organizations, smile more in their LinkedIn photos than do more senior employees.

A smile in a professional headshot could be an indicator of any number of things, from genuine happiness and fulfillment to a simple desire to be liked. The tool makes no presumptions about the significance of a smile, but simply grades its magnitude.

That said, who are the smiliest people on LinkedIn? The data indicate that they are people from America, Australia, and Israel, and professionals in people-facing roles like sales, recruiting, and hospitality. New hires and popular users with lots of connections are also likely to have smiley headshots.

On the other hand, which LinkedIn users are least likely to smile? Technical workers and residents from developing nations or former Soviet countries have the most serious headshots. People with a high degree of seniority — perhaps wishing to project professionalism and gravitas — have lower smile scores, as do LinkedIn users with relatively few connections.