The States with the Most (and Least) “Legal” Opioid Sales 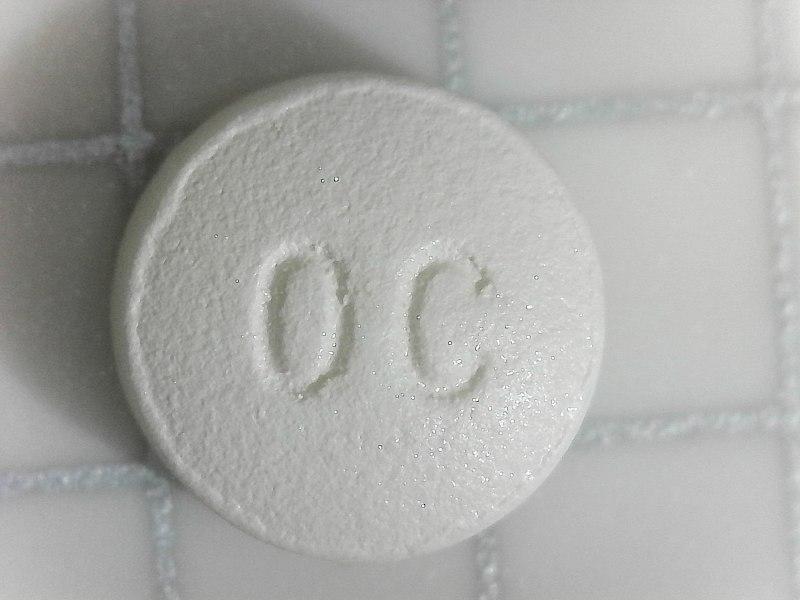 Today, the opioid crisis in America has become a public catastrophe. Drug overdose, many due to the abuse of opioids is the new leading cause of death among Americans under the age of 50, overtaking automobile accidents and heart disease.

What’s perhaps most shocking about the crisis, is its cause is widely considered to be the overuse and over-prescription of legal painkillers, namely Oxycontin. Today opioid use has expanded beyond prescription narcotics to illegal (and often times deadly) drugs like heroin and fentanyl.

Given the known risk of prescription opioid drugs, are their sales on the rise or decline America? And in which states are legal opioids sold at the highest (and lowest) rates and how does that compare to drug overdose rates?

Along with Priceonomics customer Consumer Protect, we decided to analyze government data provided by the Drug Enforcement Agency of controlled substances sales to look at the per capita opioid sales by state and over time.

We found that the current rate of opioid sales was mostly uncorrelated with drug overdoses today. However, we found a much stronger relationship between past sales in 2010 and current levels of overdoses.

Put differently, where “legal” sales of prescription opioids were high in the past, today we see their consequences in the form of drug overdoses.

To provide some context, first let’s look at the rate of legal opioid sales in the United States over the last almost two decades. The data is provided by the Drug Enforcement Agency which tracks the sales of the two main variants of prescription opioids: Oxycodone (Oxycontin, Percocet) and Hydrocodone (Vicodin, Norco). 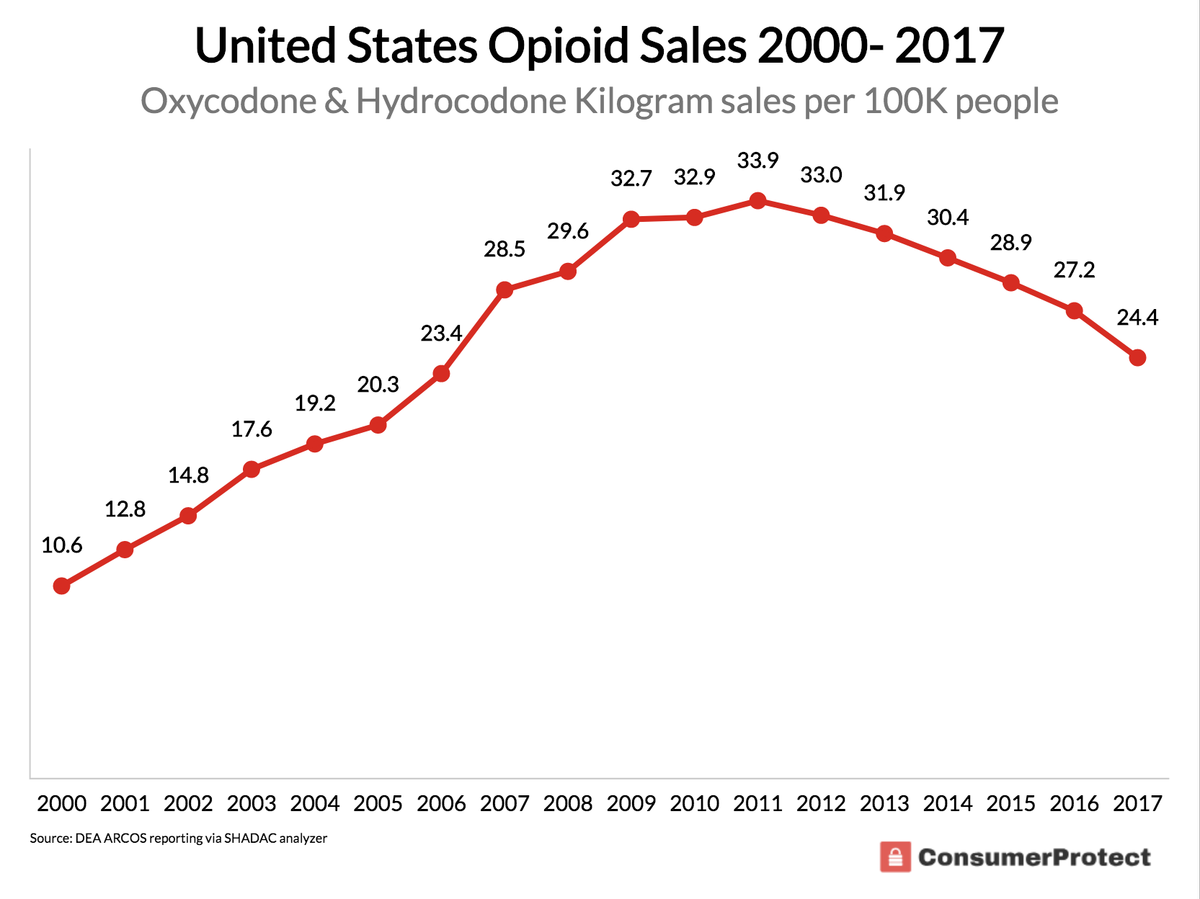 While the national average in 2017 was 24.4kg opioids sold per capita, that figure varies dramatically by location. The chart below shows each state ranked from most to least opioids sold. 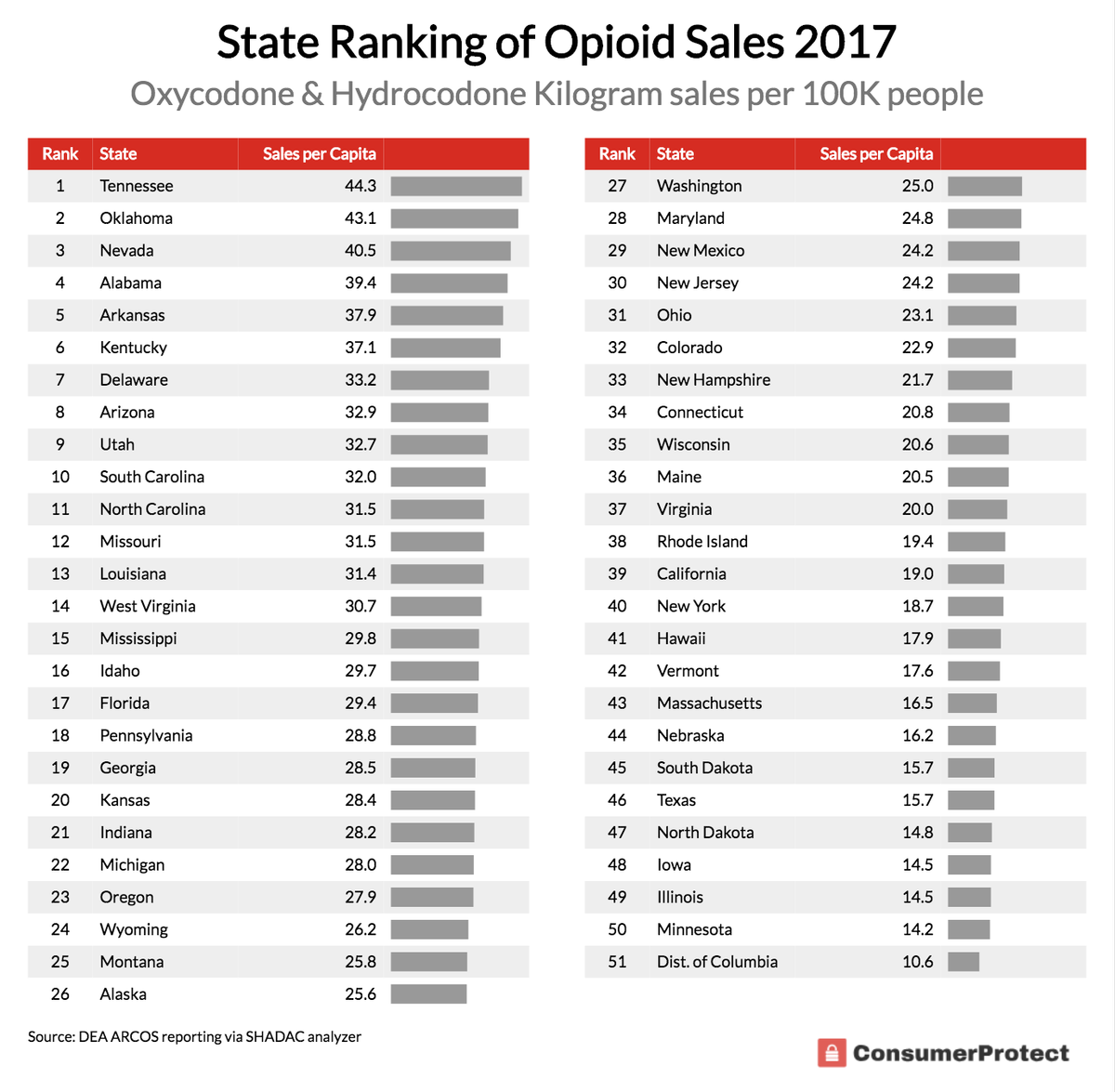 Over the last two decades, where did opioid sales in America explode the fastest? Opioid sales increased everywhere, but in some states, they grew much faster than others. 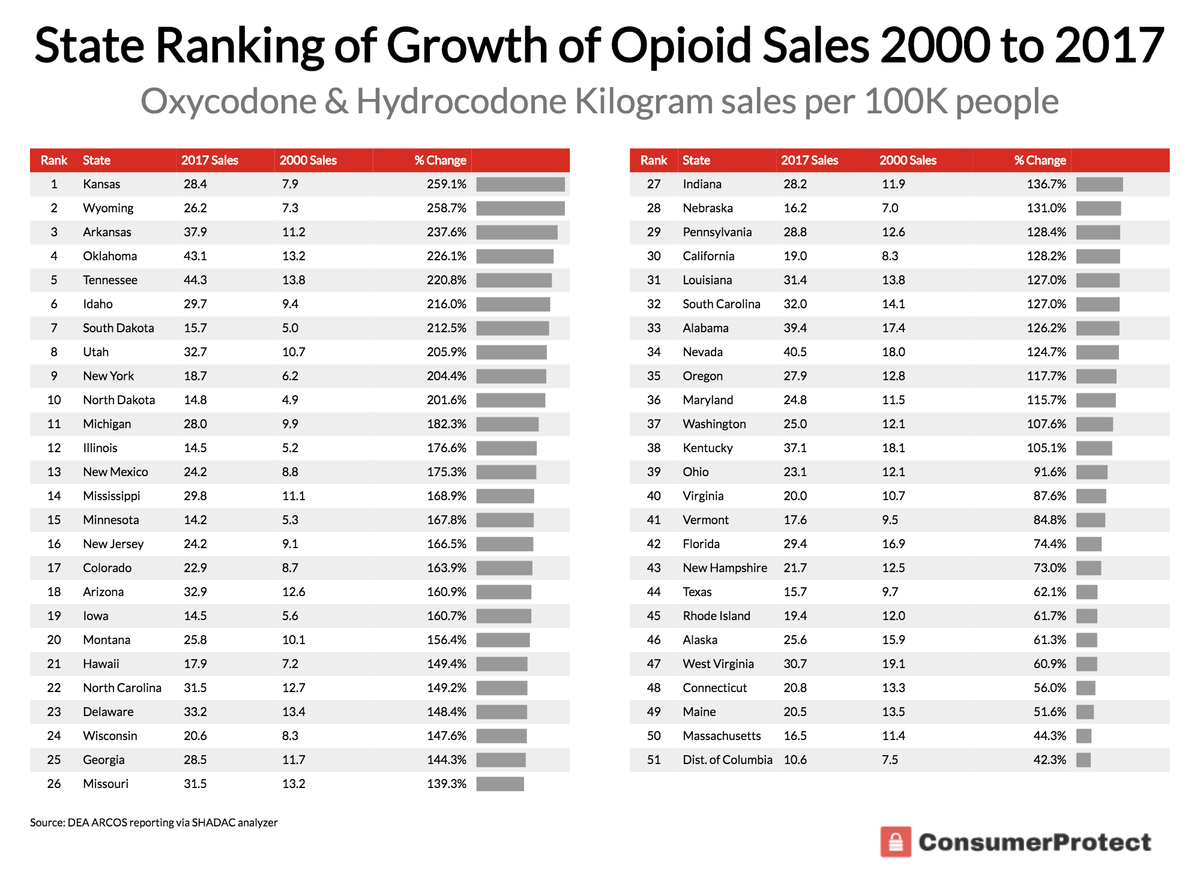 Is there any good news? Well, since the beginning of the decade, the rate of opioid sales have declined. The following charts show the states making the most and least progress on curbing sales of these drugs. 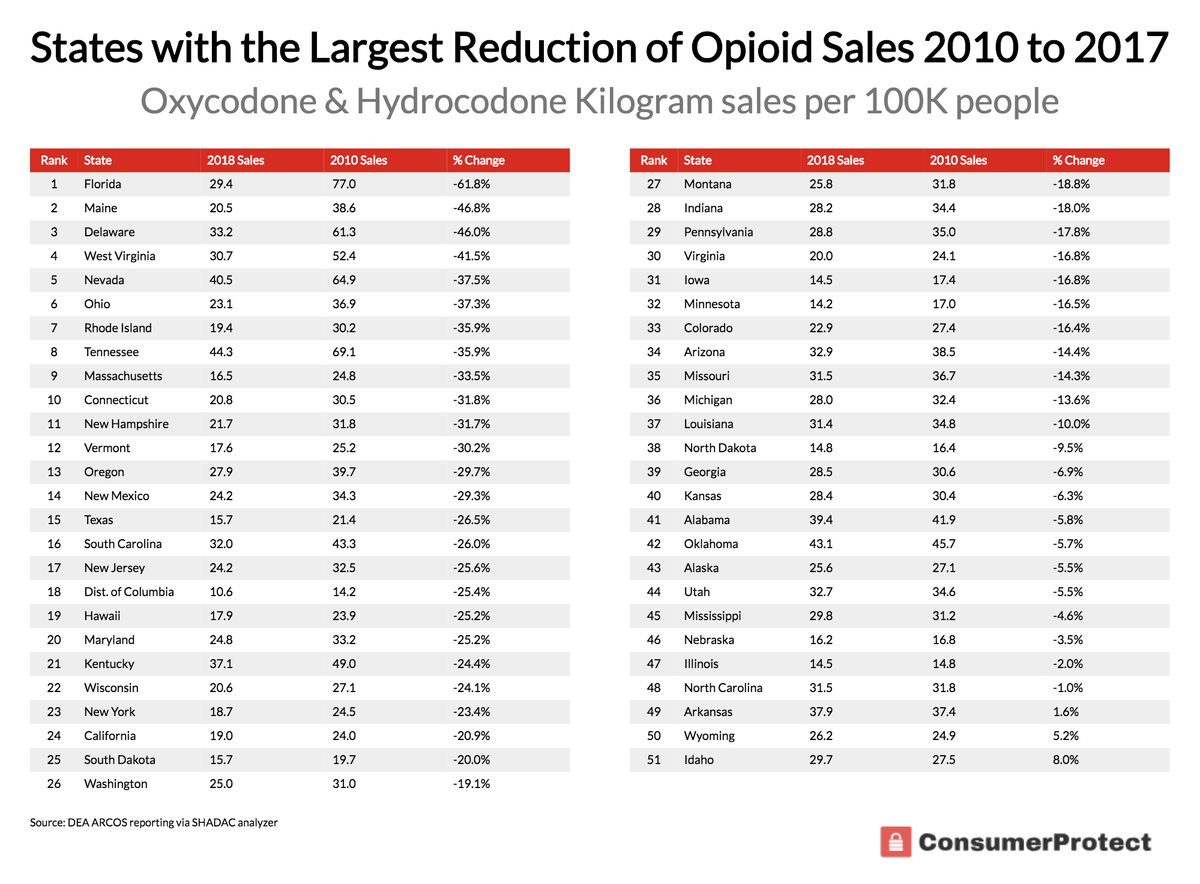 During this decade, states like Florida, Maine and Delaware have seen their rate of opioid sales decline. During this time period all states have had a reduction in legal opioid sales, with the exception of Idaho, Wyoming and Arkansas where sales are up modestly.

Is there any relationship between the level of prescription opioid sales and the amount of drug overdoses? Next, we looked at drug overdose data for 2016 as compiled by the CDC compared to opioid sales.

At first, we compared today’s opioid sales in a state to its death rate and found it had a near zero correlation. Next, however, we looked at today’s death rate versus the rate of prescription opioid sales at the beginning of the decade when sales were peaking.

Did the proliferation of “legal” opioids in the past result in more widespread deaths from drug overdose today? The following chart shows the relationship: 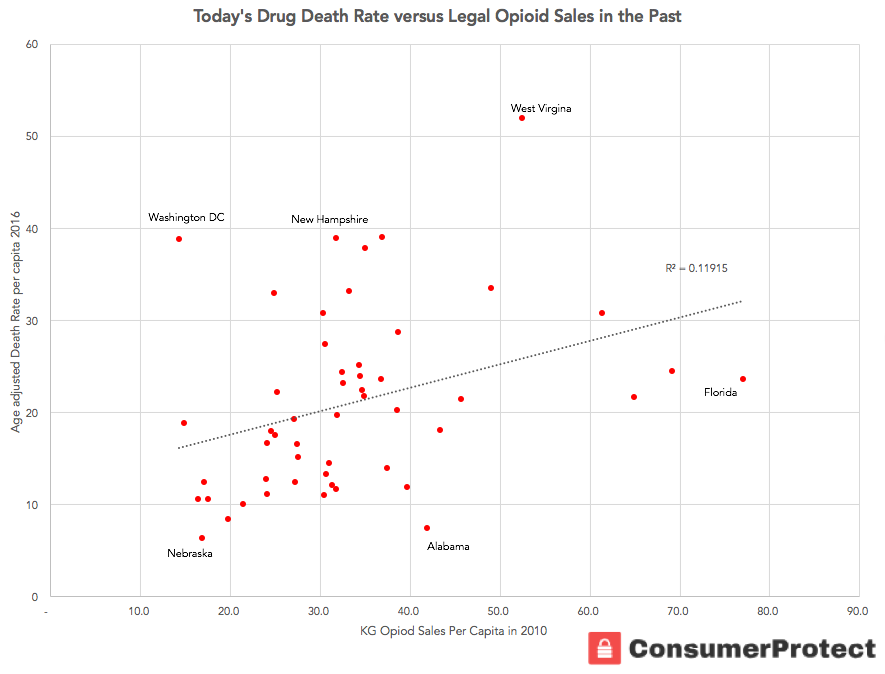 While further analysis is required, we found a positive relationship between past legal opioid sales and fatal drug overdoses in 2016 (the most recent year the data is available). The data provides some credence to the thesis that legal sales of prescription drugs in the past helped hasten the dramatic crisis going on today. What’s more, this data highlights the magnitude of the opioid epidemic in places like West Virginia where the death rates from drugs are nearly off the chart..

Today’s opioid epidemic in large part has been catalyzed by the proliferation of drugs like Oxycontin in the 2000s and 2010s.

While sales of this drug have recently been reigned in, their rate of sale continues to be much higher today than two decades ago with states like Tennessee, Oklahoma, and Nevada having the highest rate of sales in the nation. Most recently, Illinois, Minnesota, and Washington DC have the lowest rate of opioid sales.

In the last decade, the rate of legal sales has slowed down in all states except Arkansas, Wyoming and Idaho. However, the opioid epidemic has worsened even as prescription drugs have become harder to come by. Legal prescriptions may be less available, but users have switched to illegal drugs like heroin and fentanyl, which are cheaper and more deadly.