The Surprising Origins of “Don’t Mess With Texas” 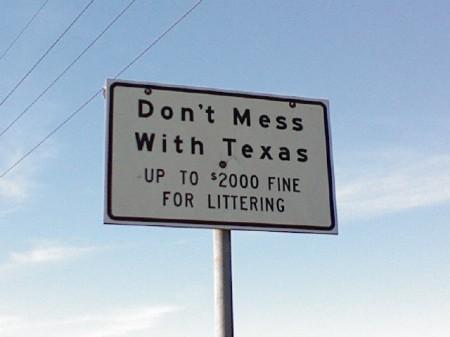 As George W. Bush accepted the republican nomination for the presidency in 2000, he made an appeal for bipartisanship by honoring the former democratic Lieutenant Governor of Texas, Bob Bullock, who had recently passed away. “I know he is with me in spirit,” Bush told the crowd, “in saying to those who would malign our state for political gain: Don’t mess with Texas.”

The moment inspired a thousand rolled eyes from democrats who mocked Bush’s cowboy rhetoric. It also inspired instant recognition from millions who have seen the phrase “Don’t mess with Texas” on bumper stickers, T-shirts, and belt buckles. It represents, as the phrase’s coiner Tim McClure describes it, how “Texas is not only a state of mind, it’s a state of heart, state of soul. There’s a sense of bigger than life here… People here are tough and rugged but know how to have a good time.”

It may have surprised Americans outside Texas to know that Bush had just quoted an anti-litter campaign. Although “Don’t mess with Texas” sounds like a creation of pop culture or the rallying cry of Texas sports fans, the phrase is a federally registered trademark of the Texas Department of Transportation. Since 1985, the slogan has accompanied highway signs announcing littering fines and advertisements encouraging Texans to keep their roadways clean.

The most popular thing ever produced by bureaucrats was the creation of GSD&M, an Austin-based ad agency hired by the Texas Department of Transportation (then called the State Department of Highways) to develop a new ad campaign. Keeping Texas’s roadways clean had become a $20 million enterprise, so the DoT wanted GSD&M to convince the young men responsible for the majority of litter — or “bubbas in pickup trucks” as the agency’s co-founder Tim McClure called them — to stop throwing beer bottles out the window.

The highways’ anti-littering signs usually had edgy messages like “Keep Texas Beautiful,” so GSD&M worked to develop something that would resonate with a younger audience. As he recounts in Don’t Mess with Texas: The Story Behind the Legend, McClure struggled initially. Tasked with creating an anti-litter campaign, the team assumed the word “litter” should feature prominently. But McClure couldn’t remember hearing the word litter used to describe anything other than kittens. While chewing over ideas during a walk in his neighborhood, McClure saw trash strewn beside the street. Reminded of his mother scolding him to clean up the mess in his room, he thought the word mess described trash better than litter. The word “mess” led him to the now famous slogan: “Don’t Mess With Texas.”

But the slogan almost never saw the light of day. The elderly, conservative management that GSD&M pitched to at the Department of Transportation resisted the novel campaign. “Can we at least say please?” one woman asked. The silence that followed GSD&M showing a preview of the first advertisement was only broken by the executive-director saying, “Well, I don’t think I like it.”

Yet Tim McClure and his colleagues won over the Department of Transportation, so in 1985, the campaign launched with a number of “Don’t Mess With Texas” bumper stickers and a blockbuster advertisement during the Cotton Bowl. In the ad, famous Blues guitarist Stevie Ray Vaughan played “The Eyes of Texas” in front of a giant Lone Star flag as a narrator said, “Each year, we spend over $20 million picking up trash along our Texas highways. Messing with Texas isn’t just an insult to the Lone Star state, it’s a crime.” (A recording of the ad is below.) The spot ends with Vaughan telling the audience, “Don’t mess with Texas.”

The ad proved so popular that the Department of Transportation had no problem getting celebrities to volunteer to appear in “Dont mess with Texas” advertisements; musicians actually called the agency asking to appear in the ads after seeing the first one. Since 1985, stars ranging from Chuck Norris to Oilers quarterback Warren Moon have appeared in the ads. Perhaps the most popular spot features Willie Nelson singing, “Momma tell all your babies, don’t mess with Texas. Don’t let ’em throw cans from them old pickup trucks.” After all, Texas roads are “a fine yellow rose.”

Yet success brought its own host of problems. As everyone adopted the popular slogan as an expression of Texas pride and swagger, it risked losing its anti-litter message. Although almost all Texans knew the slogan in 1998, the Department of Transportation found that only 61% knew its anti-littering message. The DoT sends hundreds of cease and desist letters to gift shops and other companies that slap the slogan on t-shirts and bumper stickers in violation of its trademarked status — a problem familiar to New York City with its “I ♥ NY” logo — but can’t hope to stop everyone. Still, an impressive 71% of Texans associated the motto with its anti-littering origins, even if it’s a different story outside Texas.

Lately, however, the Department of Transportation seems to have adopted the philosophy, “If you can’t beat them, join them.” The department has struggled to maintain Texas’s growing roadway system in the face of budget cuts; it has faced criticism for turning some rural roads to gravel to cut costs. So, in 2013, the department began looking for retailers to help it produce official “Don’t mess with Texas” merchandise to sell in rest areas and prop up the organizations’ budget.

This is actually the second innovation out of the Texas Department of Transportation to be monetized. The same year Stevie Ray Vaughan first told people not to mess with Texas, the department launched the nation’s first Sponsor a Highway campaign, in which volunteers took responsibility for picking up litter alongside a stretch of highway. Later, a related Adopt a Highway program would place companies’ name and logo on highway signs in return for funding roadside cleanups.

But whether it’s remembered as an anti-litter campaign or an expression of pride in a state with an independent streak, the “Don’t mess with Texas” message seems clear. As expressed by George Foreman when appearing in a Texas Department of Transportation ad as a minister preaching to a congregation: “If your brother takes from you, you give to him. And if he slanders you, you sing his praises. But if he ever, ever messes with Texas… pray for him brother! Pray for him!”