The Town Named After a Sex Toy 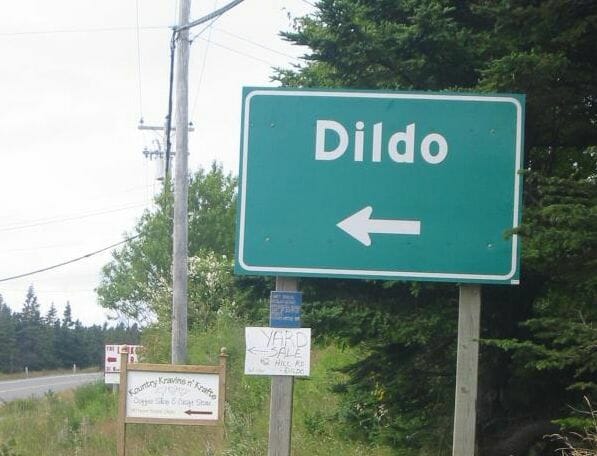 Boring, Oregon; Hell, Michigan, Toad Suck, Arkansas; Monkey’s Eyebrow, Kentucky — Americans have truly gone to all depths of the imagination in naming their small towns. While the U.S. contains a plethora of unfortunately-penned places, our neighbors in Canada have outdone us, particularly in the northeastern province of Newfoundland and Labrador.

While the exact origins of Dildo’s name are shrouded in mystery, the word was widely used in the 18th century to describe anything cylindrical (test tubes, corks, etc.). But the term’s etymology dates as far back as the 1590s, when it was used as a bastardized form of Italian diletto (“delight”). Some scholars suggest the word was enlisted to describe sex toys as early as the Renaissance, though others, like Dildo resident Stella Wright, surmise that the town has existed “a lot longer than artificial penises have been around.” Whatever Captain Cook’s intentions may have been, the name is unmistakably penetrating. Similar protests in other crudely-named Newfoundland provinces have been more successful. Around the same time, a coastal community, Gayside, changed its name after residents were accosted by homophobic locals. Cuckold’s Cove, another waterfront town, is now Dunfield; Silly Cove is now Winterton, and Famish Gut (another Captain Cook classic — an ode to his starving seamen) is now Fairhaven.

“You’ve hit the spot, all right,” she tells visitors with a wide smile. “It does rather stick out at you from the map, doesn’t it?”