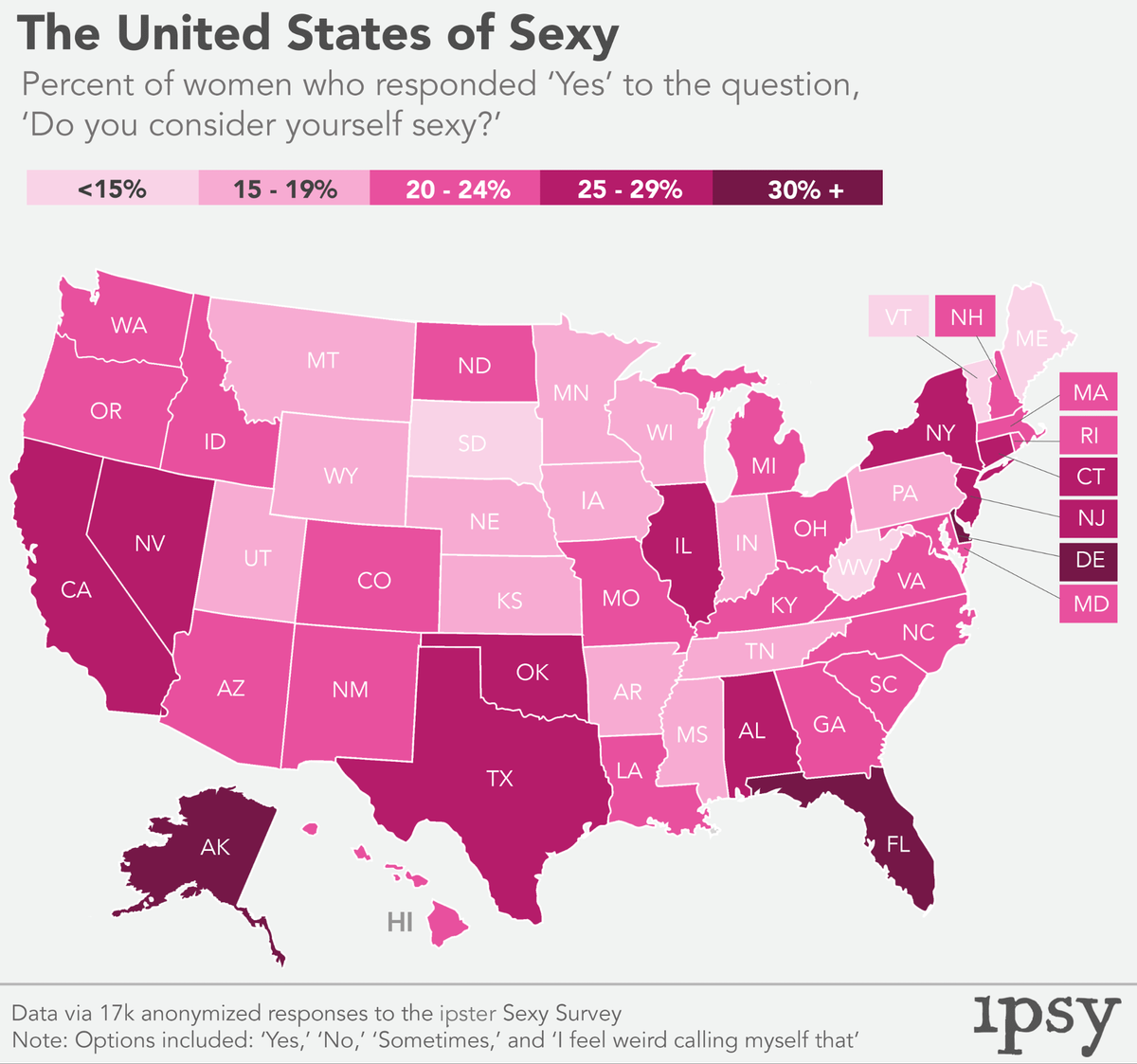 It is, obviously, a personal question. Advertisers may tell us that “sexy” is a Victoria’s Secret model traipsing down a runway. Or a photoshopped magazine cover may imply “sexy” is realized through silky skin, luscious hair, and hourglass proportions.

But what do people actually think? We analyzed data from Priceonomics customer ipsy, a beauty company, who ran a survey and generated more than 17,000 responses from people (the vast majority of whom were women) all across the country.

What traits and characteristics do women find most sexy about themselves, and others? How do these opinions vary across age, sexual orientation, relationship status, or body traits? Does a history of being body shamed affect perceptions of sexiness?

In this report, we’ll dive deeper into the results. But for starters, here are a few things we found:

Do you consider yourself sexy?

First, let’s take a look at how confident America’s women, as a whole, are about their own sexiness. We posed the question “Do you consider yourself sexy?” The consensus: 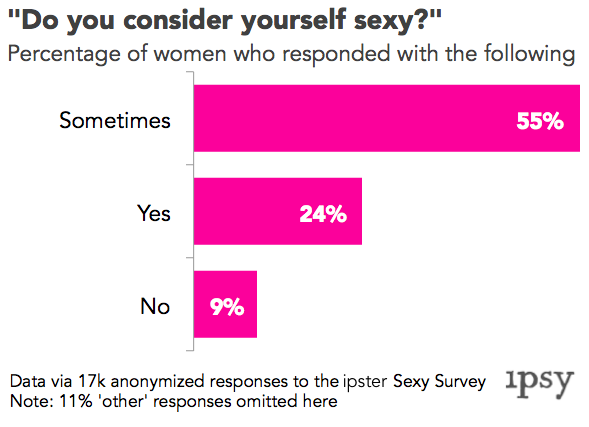 The majority of women (55%) responded that they feel sexy “sometimes,” while 24% emphatically answered “yes,” and 9% answered “no.” (About 11% responded with another option we provided: “I feel weird calling myself that.”)

But when broken down by state, these percentages widely vary. 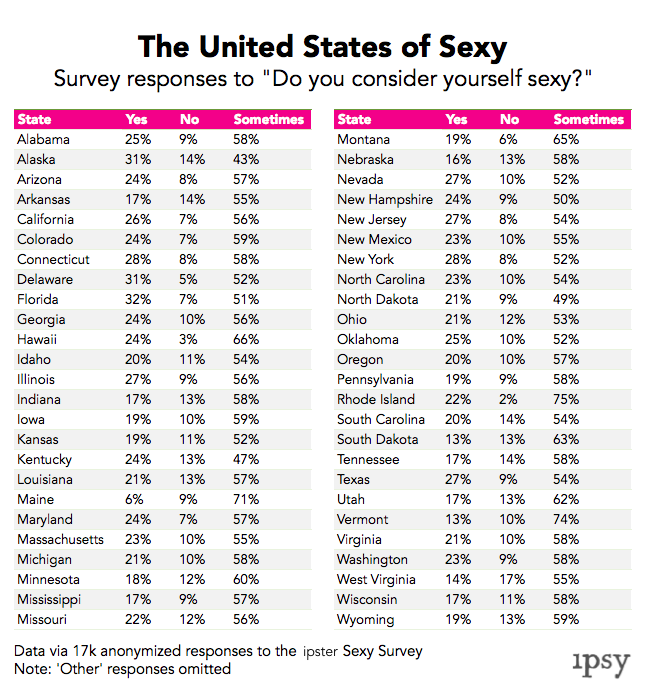 In some states (Maine), the “yes” responses were as low as 6%; in others, like Florida, it topped 30%. Taking a look at the states with the highest and lowest rates of “yes” responses gives us a general sense of how perceptions of sexiness vary geographically. 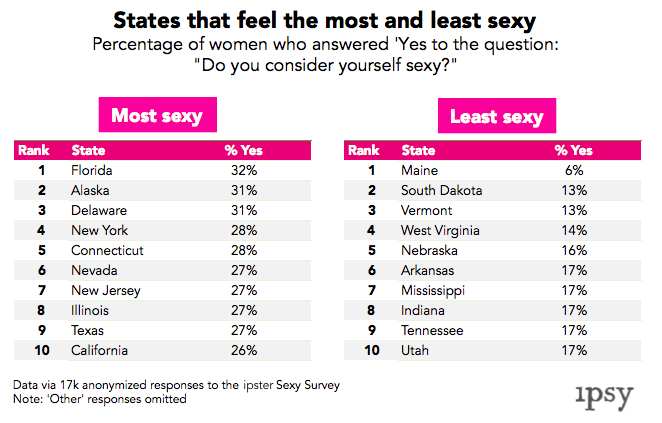 On the other end of the spectrum, a number of the states in the bottom 10 (Nebraska, Arkansas, Indiana) are in Middle America. In America, many ideals of beauty and fashion emanate from coastal epicenters like Los Angeles or New York City; it’s possible that women in the middle of the country are more likely to feel like they don’t fit into these ideals.

Perceptions of sexiness are dependant on much more than what state you live in. Next, we’ll take a look at how our respondents’ confidence in sexiness varies by subset. 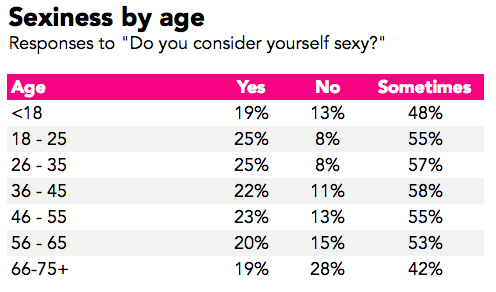 In the chart above, we see something interesting play out: the very youngest (<18) and very oldest (66-75+) respondents are the least confident about being sexy. In both cases, 19% responded “yes” -- 20% less than the national average. On the whole, women between 18 and 25 feel the sexiest.

Sexual orientation also plays a role in perceived sexiness. Gay (30%) and bisexual (28%) women are far more confident about their sexiness than the average straight women. 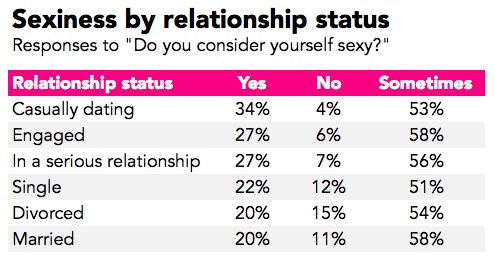 Relationship status also affects sexiness -- but not in the way one might think. Predictably, those who are in relationships (either casual or serious) are more likely to consider themselves sexy than single women (22%). But both married and divorced women are less confident. 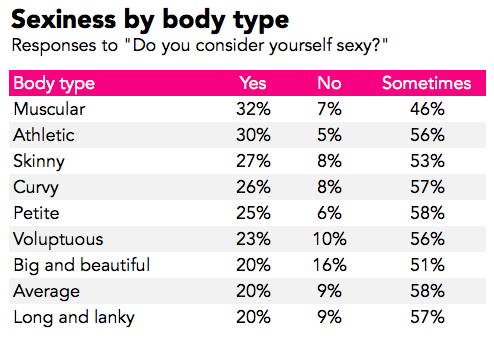 There is also a clear variance in perceived sexiness across self-identified body type. Muscular and athletic women (32% and 30%, respectively) are high above average, while big and beautiful, average, and long and lanky women (all 20%) rank far below average.

How women relate with their bodies

Of our 17,000+ responses, here’s how women self-identified their body type: 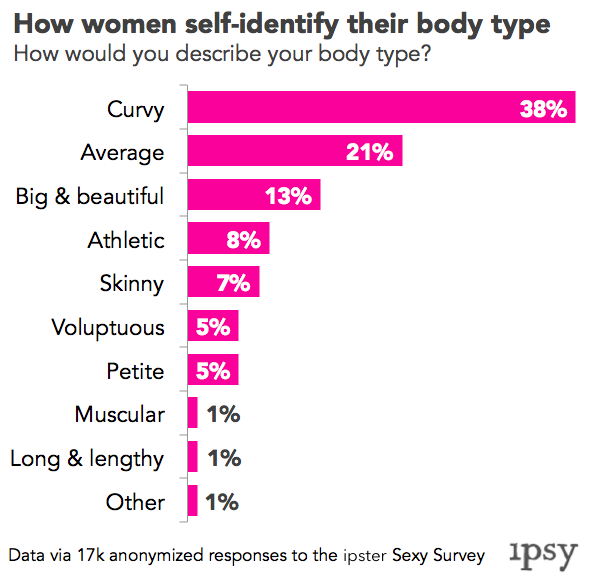 But when we look at what women see as the ideal body type, the data skews significantly: 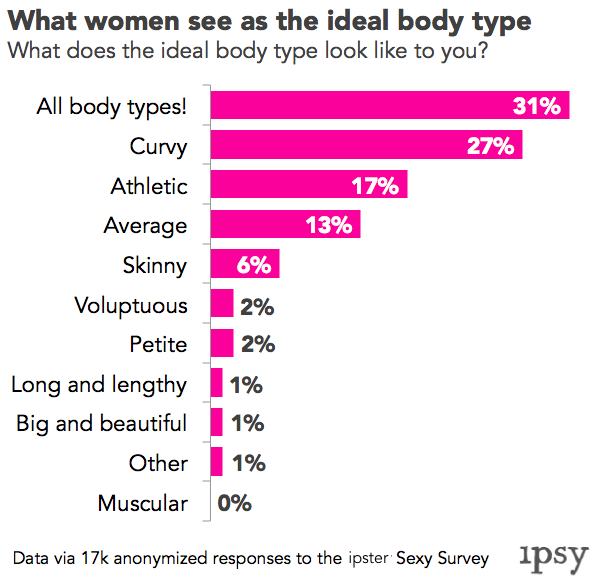 Though most women, when asked, seem to be comfortable in their own skin. 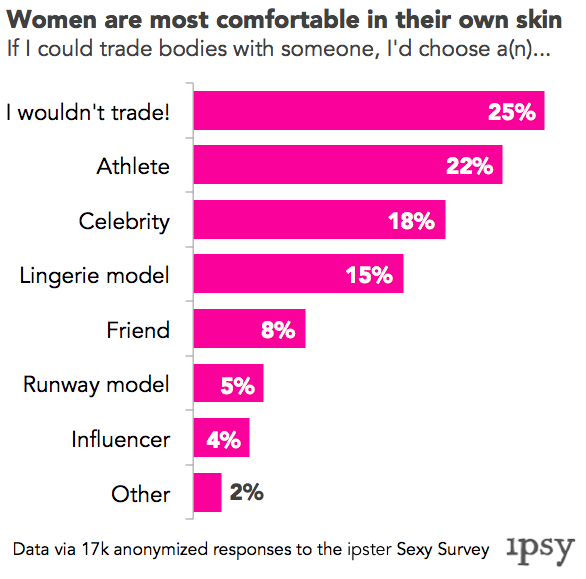 A quarter of respondents wouldn’t trade bodies with anyone. Outside of this, the most popular ideal was not a model or an influencer, but an athlete (22%).

Of course, being sexy is more than just about physical characteristics. What about character traits? 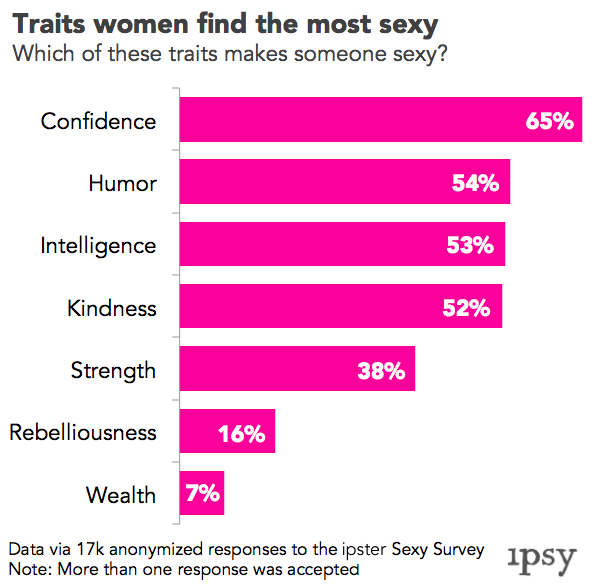 Far and away, women find confidence the sexiest trait (65%), followed by humor (54%) and intelligence (53%). These results hold true when analyzed on a deeper level, across age, sexual orientation, relationship status, and body type.

Wealth, at 7%, seems to not be on the forefront of most of our minds.

How body shaming plays a role in sexiness

Lastly, we were curious to see how frequently women are body shamed, and how, if at all, this shaming affects the perception of sexiness. 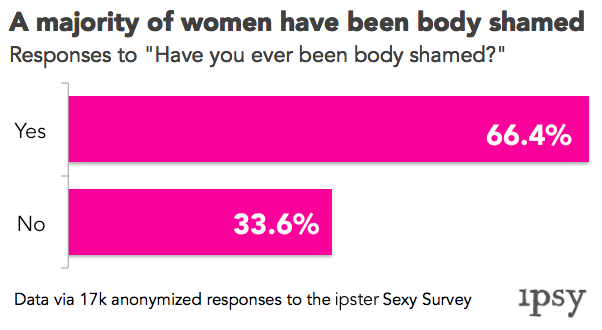 Overall, two-thirds of women in our survey -- more than 11,000 -- reported being body shamed at some point in their life. But for certain groups, these rates were go up. 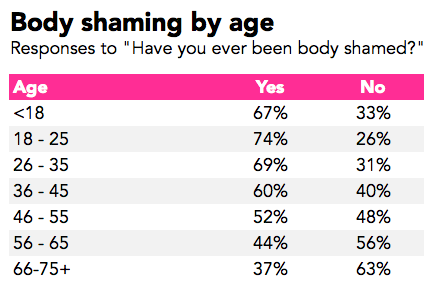 Three in four women between the ages of 18 and 25 report body shaming, and the 26-35 bracket isn’t far behind. With age, reporting of body shaming seems to decline: comparatively, 37% of women aged 66 to 75 reported being body shamed.

For non-straight women, these rates are even higher: an astonishing 85% of bisexual women report being body shamed, as do 79% of gay women -- nearly 20 percentage points higher than straight women. 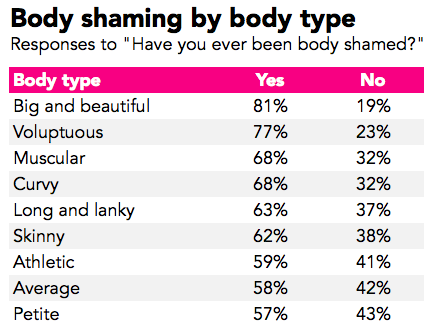 In all of these sets, no single type of woman falls below 50%. In every case, the majority has experienced some form of body shaming.