The Internet’s vast size means users can afford to be fickle.

With an estimated 4.66 billion web pages available to browse, users have a virtually unlimited menu to choose from. This means even the smallest obstacles – a clunky interface, or a detour to download a required plug-in – can send users running away from a site. Amazon discovered that just an additional 100 milliseconds of waiting led to a 1% decrease in sales from their users.

And when it comes to watching video online – an increasingly central part of what people do on the Internet – nothing deters users like buffering breaks.

Just how much of a delay will a user put up with before moving on? We wanted to understand exactly how buffering impacts video watching behavior, so we put the data of Priceonomics customer Mux to work. Mux has data on video performance and viewer experience – everything from video load times to playback errors to buffering interruptions. The data is made up of millions of video watching sessions from across the world—though about two-thirds comes from the United States.

Our analysis shows that just one buffering event decreases the amount of video a viewer watches by 40%. The more time a video spends buffering, the less video people watch, and even a small amount of buffering has a huge effect on an audience's behavior.

We began our analysis of buffering by looking at just how often buffering actually occurs. Do most videos load perfectly, or are buffering interruptions the norm? The chart below shows the percentage of videos punctuated by buffering events. 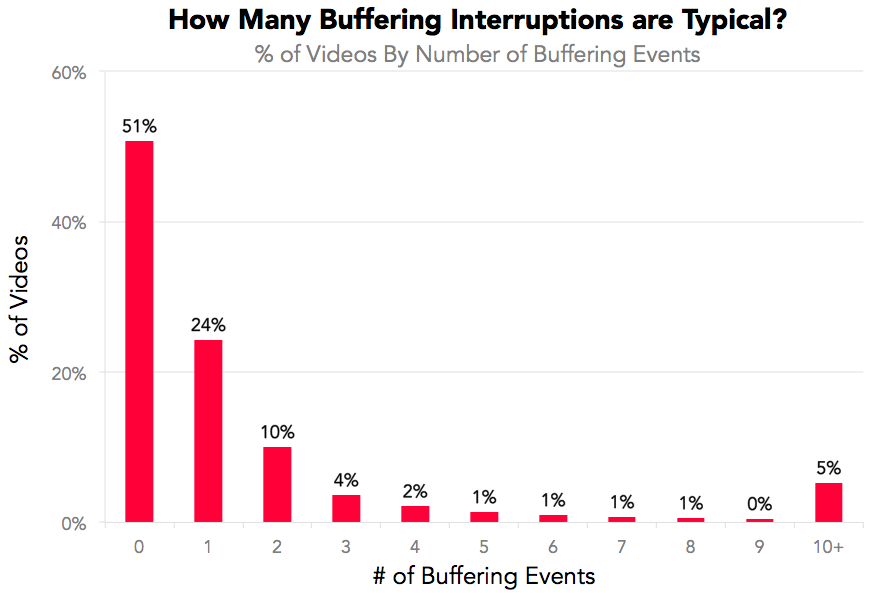 When buffering does occur, how long does it last?

For each video in our dataset that was interrupted by at least some buffering, we found the total amount of time spent waiting for the video to start again. The following chart shows the percentage of these videos that fell into different categories of total time spent buffering. 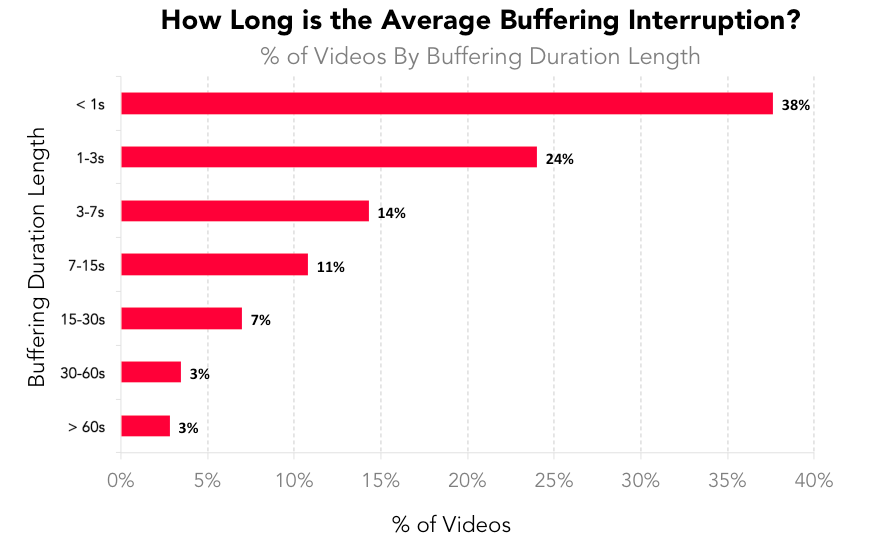 According to our data, most videos buffer relatively quickly. Thirty-eight percent of the videos in our sample buffered for one second or less. Longer buffering durations were rare, with only 13% of videos buffering for 15 seconds or more. Of course, some of these buffering interruptions would last longer if the user allowed it. Most video watchers won’t wait patiently as a video buffers for a long period of time.

So how much buffering will the average user put up with?

To answer this question, we pared our sample down to videos that lasted between one and five minutes, and grouped views into viewing sessions. When it comes to video-watching behavior, most publishers should focus on sessions – bouts of binge watching videos – and not just individual video views. YouTube doesn’t want you to watch just one video to the end; YouTube wants you to spend your whole evening on YouTube, and it's OK if you jump from one video to another.

The following chart shows the relationship between the number buffering events in a session and the median time spent watching videos. 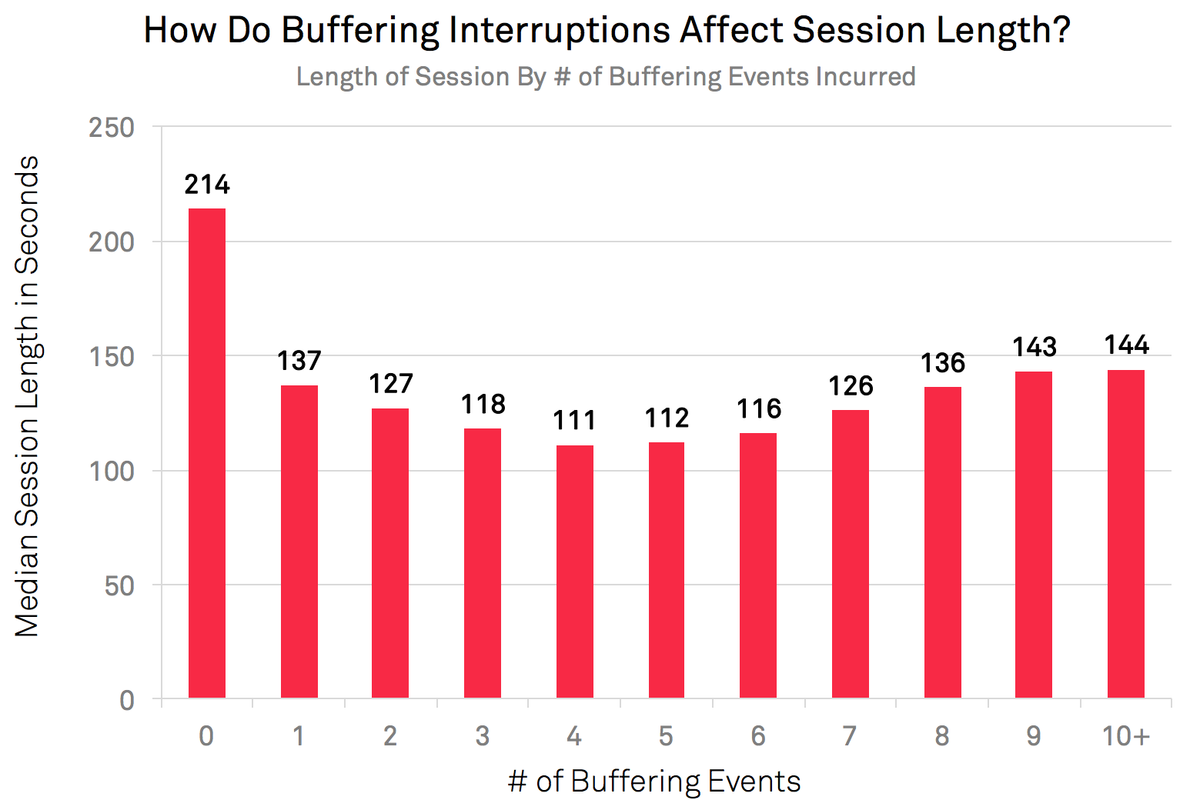 After four interruptions, sessions rise in duration with more buffering breaks. This makes sense; viewers who persevere through the first interruption or two are invested in finishing their video. There is also a relationship between session length and buffering: the more someone watches, the more opportunity there is for buffering to occur. 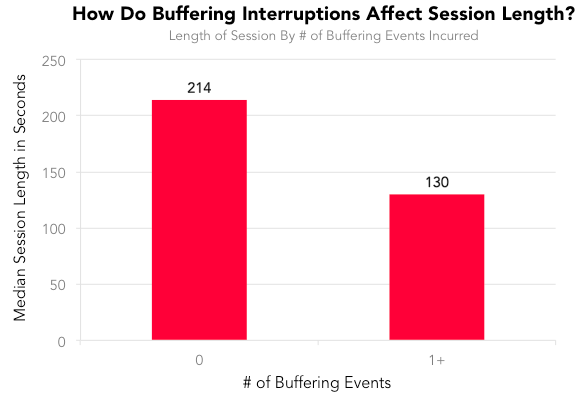 Again, just one buffering event triggers a huge drop in viewership. People who experienced buffering had an average session length of 130 seconds – a 39% reduction.

Our analysis confirms that people really, really hate waiting for videos to buffer. According to our data, just one short buffering interruption leads to 39% less time spent watching video on a site, as viewers search for more fulfilling Internet diversions.

The good news is that video publishers can eliminate many cases of buffering. Publishers can adjust video bitrates, move to adaptive streaming formats (like HLS or DASH), change CDNs, use multiple CDNs, change video players, improve adaptive algorithms, and fix bugs that lead to buffering.

The data shows that people have no patience for buffering. After all, the promise of the Internet is instant gratification, and the benchmark is broadcast TV. Why would people wait for a video to buffer?

Our next article asks whether Obamacare could learn a thing or two from doggie health insurance. To get notified when we post it  →  join our email list.