The Wildfire West: Where Housing Sprawl and Wildfire-Prone Areas Collide 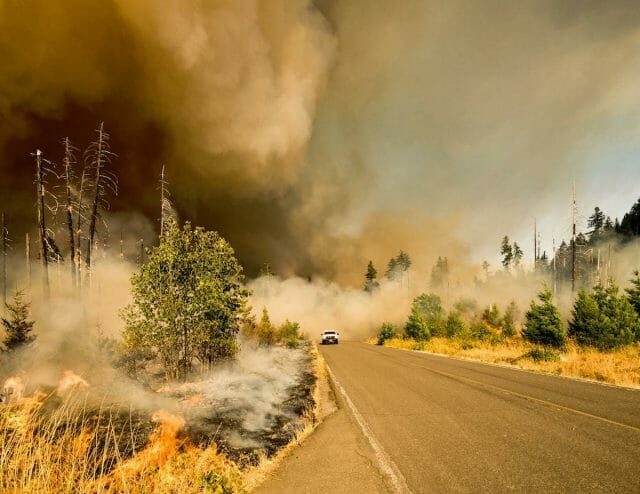 As the world is still in the midst of a global pandemic, we are now entering fire season in the American West. After years of elevated global temperatures and drought, by the end of each summer, smoke-filled skies seem to be the norm across the West.

Though we would love a respite from calamity, there is no reason to believe that we’ll be spared from wildfires this year. With scientific certainty, we know which areas are prone to wildfires, though home construction continues in those areas.

At Cape Analytics, we use artificial intelligence to analyze vast quantities of geospatial imagery to help insurers and other companies better understand properties and property risk. Along with our partner HazardHub, we wanted to explore exactly how much sprawl there has been in the West’s high-risk fire zones. From the standpoint of insurance and danger to human life, these homes and adjacent communities are especially risky. Quantifying the risk can help homeowners and agencies such as CAL FIRE take more proactive and focused measures to protect lives and property.

To create this report, we analyzed new homes built over the last decade and found that California leads the West when it comes to the most builds in high-risk areas. Given that California is the most populous state in the country, we can expect a lot of new construction. When adjusting for population size, Utah leads the West by a significant margin in building homes in places with high fire risks.

When looking at specific cities with the most new home construction in high-risk zones in the West, El Dorado Hills, California tops the list, followed by St. George, Utah. In addition, as the pandemic has precipitated an urban exodus, many residents are fleeing into higher-risk fire zones.

Before diving into the analysis, it’s worth spending a moment on the data and methodology. In this project, we identified new home construction over the last decade in Western states prone to wildfires. Specifically, we focused on areas in or near the Wildland Urban Interface — areas designated by the U.S. Forest Service, where human development and fire-prone wilderness meet. Our hazard data partner, HazardHub, then provided us with a wildfire risk score for each locality. This risk score takes weather, wildfire history, and many other factors into account. Finally, we narrowed down our analysis to new homes built in those high wildfire risk zones.

First, let’s look at the raw number of new homes built in the last decade in high wildfire risk zones out West: 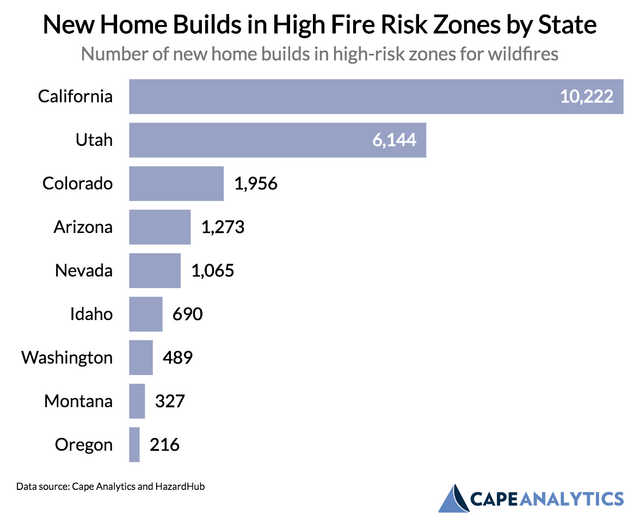 Over the last decade, California has built over 10,000 homes in areas deemed as high wildfire risk. High land prices and stringent zoning requirements in the California urban core have pushed builders further into rural areas, where the fire risk is much higher. Over the last few years, we have seen how dangerous wildfires can be in these areas of California, as places like Paradise and Santa Rosa have been devastated by fires. Among Western states, Utah ranks second in terms of high fire risk building, followed by Colorado.

However, it’s important to remember that California is the largest state in the United States by population and the third-largest by landmass. Given its size, we can expect more home construction in California compared to other states.

To account for this size question, we’ve adjusted by population, to see where states are building more homes in wildfire zones at the highest per capita rate (per 100,000 residents): After adjusting for population size, it becomes clear that Utah has the most home building activity in high fire risk zones in the West. For every 100,000 citizens, 191.6 homes are built, a figure that is approximately 5x higher than Idaho, which ranks second in this metric. Utah, an arid state with large swathes of flammable vegetation, has actively developed a number of communities in high wildfire risk zones.

To break it down even further, let’s look at the cities out West with the most new homes built in high wildfire risk zones. The chart below shows all cities in our analysis with at least 100 new builds in fire zones: 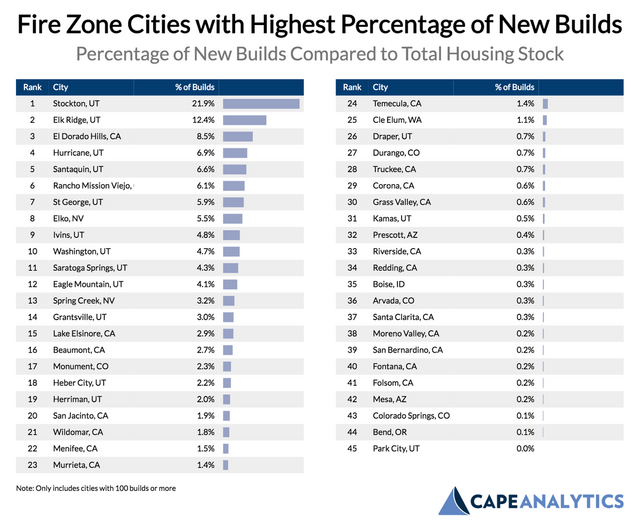 El Dorado Hills, California, a town in the picturesque Sierra Nevada mountain range in California, has the most new home building, with 1,415 new builds recorded over the last decade. Experts have identified this area as part of the “rural sprawl” increasing fire risk. Autumn Berstein of the Sierra Nevada Alliance comments on the area:

“There is a tremendous amount of population growth going on in these extreme fire danger areas…Unless Sierra counties can start to change the way they are growing, we are going to have a much bigger fire problem on our hands.”

A similar dynamic is taking place in Utah, as large amounts of housing development are taking place in naturally beautiful, but highly combustible areas. For example, St. George, Utah, the second-ranked city in this analysis, is a mecca for retirees and vacationers near Zion National Park. The area, however, is filled with new developments plunked in the middle of high fire risk zones where water is brought in via pipeline from far away.

By looking at the increase in home building on a relative basis (comparing the number of new homes to the size of the city), we can bring smaller towns into focus. The chart below further demonstrates how Utah’s sprawl has accelerated over the last decade, with small towns like Stockton, Hurricane, and Santaquin expanding into high-risk areas. St. George again ranks high on this list as well.

Additional HazardHub analyses of these towns in Utah’s high desert paint a more detailed picture: St. George has been in a state of drought for 72 percent of the last 20 years, while Hurricane has been in drought for 68 percent of the previous 20 years. These bone-dry conditions are interspersed with short periods of rain, which allow scrub brush to grow…and then dry out again, creating excellent fuel for wildfires. These areas may not be ringed by dense forest, but they are still at very high risk of destructive fires driven by desert winds.

As a company that works with home insurers, each property’s fire risk is a metric we monitor over time. As this analysis shows, a tremendous number of new homes are being built in the highest wildfire risk areas. While they may be naturally beautiful, they are also naturally combustible. Our analysis suggests places like California and Utah contribute to rural sprawl and do so at considerable risk for more destruction of homes and loss of life wrought by wildfires. Moreover, as the climate gets hotter and drier, the risk in these areas will only grow, as stronger, wind-driven wildfires impact even some lower-risk regions.

What can residents do to protect themselves as wildfire risk increases in the coming decades? Luckily, some actions are proven to mitigate risk for individual properties.

One of the most effective deterrents is defensible space — a fancy word for clearing vegetation and flammable debris around your house. CAL FIRE, for example, recommends residents trim tree branches at least 10 feet away from buildings and other trees, and remove dead plants, branches, and shrubs up to 30 feet away from the structure. When implemented across entire neighborhoods, maintaining defensible space can insulate communities from the worst damage. For many of the areas named in this report, mitigation measures like these could be the difference between a neighborhood withstanding a wildfire and a community being destroyed.