The United States of Solar 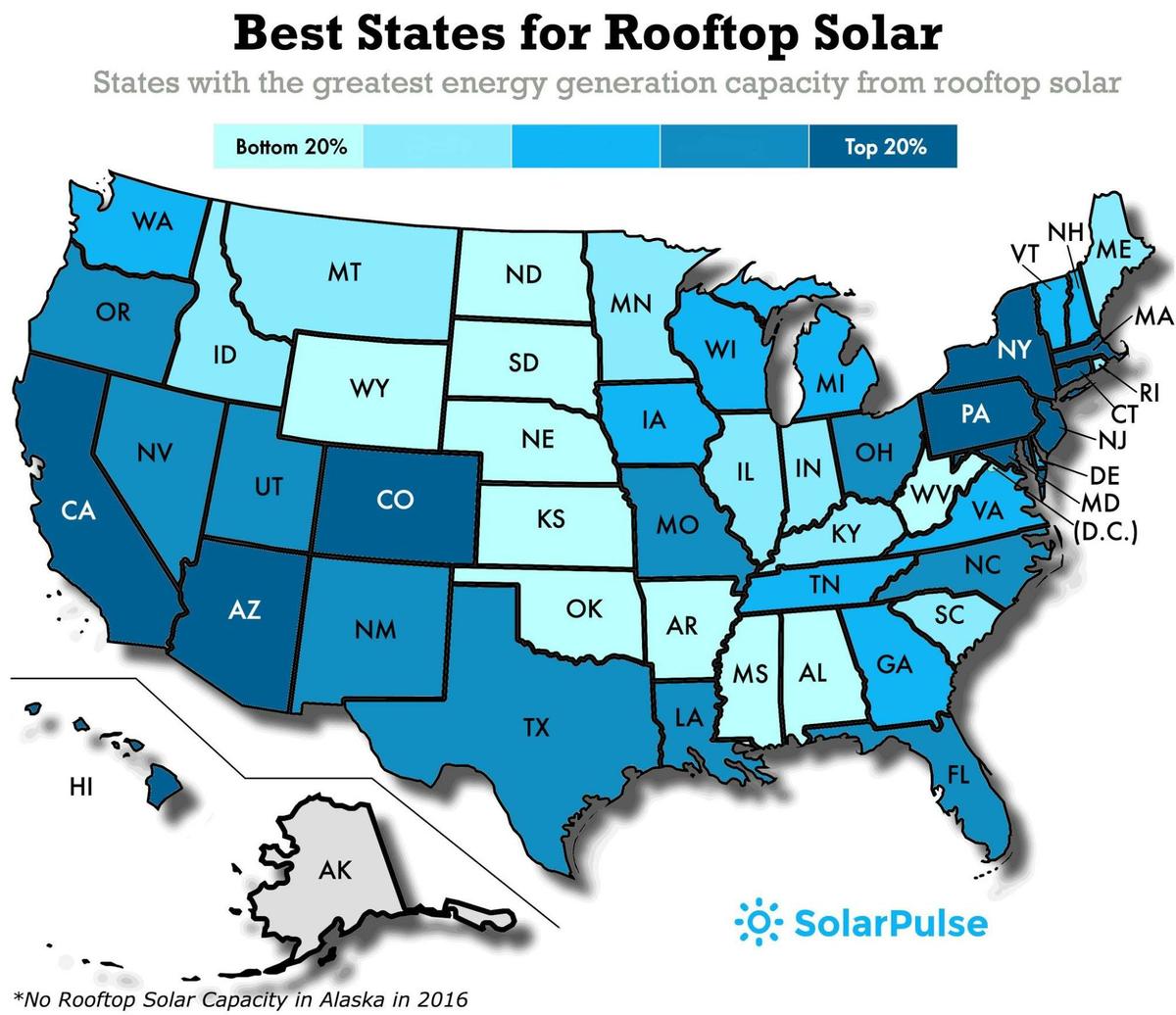 The United States’ relationship with solar power has been an up and down affair. But now it seems to be in true ascent.

In the late 1970s, solar power was hailed as a revolutionary technology that could save the country from its energy crisis. In fact, the nation’s most famous address, 1600 Pennsylvania Avenue, had solar panels installed on its roof to demonstrate the importance the Carter Administration placed on solar.

But in the 1980s, solar fell on hard times. The Reagan Administration prioritized fossil fuels and nuclear power, slashed budgets for solar programs, and in a symbolic blow to the green revolution, removed the solar panels from the White House.

Now, amidst growing concerns about climate change and the declining price of solar panel systems, solar is once again in the spotlight – and its future looks bright.

Using data from the Energy Information Administration and from Priceonomics customer SolarPulse, we examined the capacity of rooftop solar panels across the country and the total electricity generated by solar projects developed by power utilities. What we found won’t please solar detractors. Solar is being used across the country, and our capacity to create more solar energy is rapidly growing.

So which states are powering this surge in solar energy?

The map at the beginning of this article shows which states have the most (and least) installed solar capacity on the roofs of homes, businesses, and other buildings. Installed solar capacity refers to the amount of energy that these panels can produce from sunlight under standard conditions, as measured in a controlled laboratory environment. It is not a measure of how much energy was actually produced, as that can vary based on shading, soiling, temperature, and other factors. Instead solar capacity reflects energy generating potential and in which areas solar is more or less widely adopted.

The table below shows the amount of rooftop solar capacity in each state reported by the US Energy Information Administration. Each state’s capacity differs considerably, even among the very top states.

California has by far the largest amount of energy generation capacity from rooftop solar. In terms of raw numbers, it has almost three times that of the number two state, New Jersey.

But considering California is such a physically large and populous state, the comparison is not exactly apples to apples. Looking at the amount of solar relative to population gives us a different picture.

Hawaii, Arizona, and New Jersey all lead California in terms of per capita capacity. Hawaii leads the pack with as much capacity per capita as the next three states combined. This makes sense, because retail electricity in Hawaii is three times as expensive as in most of the continental United States.

California and Hawaii may be some of the biggest states for rooftop solar, but at the rate some markets are growing, it’s easy to imagine other states breaking into the top ranks.

According to the Energy Information Administration data, rooftop solar panel capacity in January 2016 was four times larger than in January 2015. Looking at the top 10 states for rooftop solar gives a good picture of how this growth is even more rapid in specific markets. These states already have significant capacity, and they’re still growing. 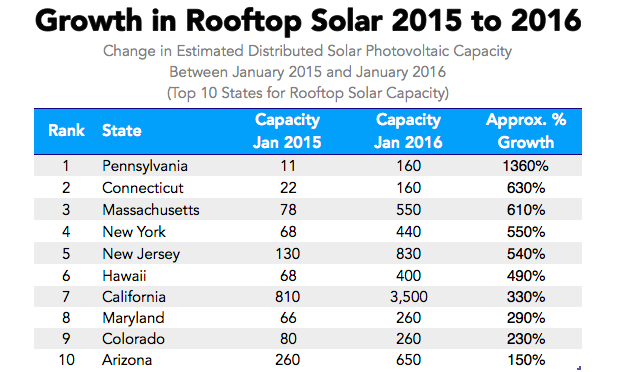 For many people, the term “green energy” brings to mind images of rooftops covered in solar panels. But these personal systems are only one part of America’s solar infrastructure. Solar energy generated from utilities—either from large farms of solar panels or massive facilities redirecting sunlight to heat water—actually makes up the majority of solar used in the grid.

Each state has a different mix of rooftop and utility solar working together. Conditions in each state such as land availability, state policies, and price incentives can make one or the other more attractive. 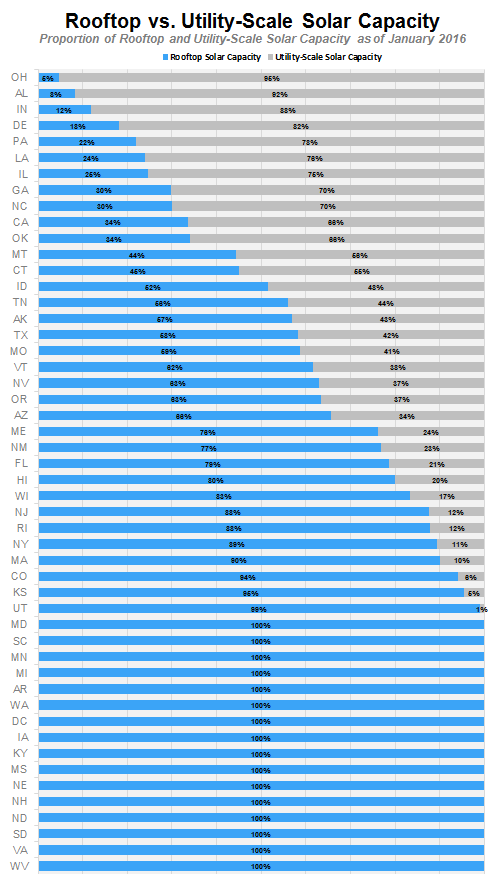 Many of the states with the greatest solar capacity, like California, have more utility solar capacity than rooftop. Other states, such as New Jersey, primarily generate solar from rooftops. This makes sense given the profiles and policies of each state: California has one of the strongest requirements for utilities to create electricity from renewable sources, while New Jersey has very favorable incentives for homeowners who install solar systems.

The remainder of this article will do exactly that. Looking at utilities has the added benefit that we can look at more detailed data on their production, since utilities report actual solar generation, not just capacity.

Once again using data from the Energy Information Administration, we dove into solar power generation to determine which states were producing the most. It is important to note that this data is independent of rooftop solar, and in some cases, there are great differences between the two datasets. Some states with rooftop solar capacity have absolutely no utility generation.

Just like with rooftop solar, there are differences between the top and bottom states. But for utility generation, the disparities are much greater. The top 10 states alone generate 95% of all utility solar power in the country. 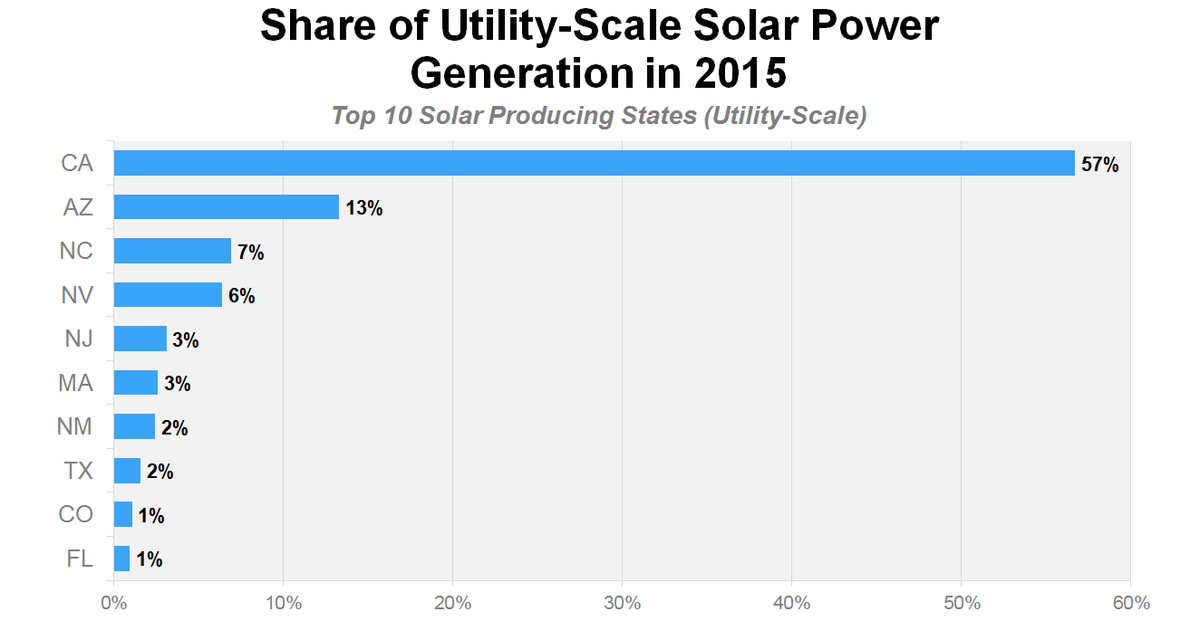 The gap between the first and second largest producers is staggering as well. California produces over half of the nation’s utility level solar power. If we compare generation relative to population, however, another state leads the pack.

Nevada and Arizona, two states with plenty of sun, lead the country for generation per capita.

Even in the past several years, solar produced by utilities has shown significant growth across the United States. In 2015, 26.5 million MWh were generated by utility solar in the United States—over 20 times more than in 2010. That rapid growth is partially the result of new markets becoming big players in solar. The table below shows that some of the current top producers barely had any solar generation at the start of the decade.

Rooftop solar and utility solar are widespread and growing. They are both part of the grid. But as we’ve seen in our analysis, their deployment levels vary in each state.

A notable example of this dynamic is Washington, D.C., where 100% of solar energy is generated from rooftop systems. It’s a densely populated metro area with no room for a utility solar project, but its rooftop capacity still grew by over 15 times from 2015 to 2016. Once again, 1600 Pennsylvania Avenue is at the forefront of this change, as President Obama had rooftop solar panels re-installed in 2011.

Renewables do not yet play a primary role in providing electricity for the United States, but recent progress is impressive. There is little doubt that solar—both from rooftops and utilities—have an important role to play in a sustainable energy future.