We Need a Warby Parker for Mattresses

This started off as a post about used mattress depreciation, bedbugs and risk aversion. As we dug into the industry though, it became clear that the more salient point is that the whole mattress industry seems to be a giant, make money hand-over-fist, anticompetitive racket. Precisely the sort of industry that’s a candidate for disruption. 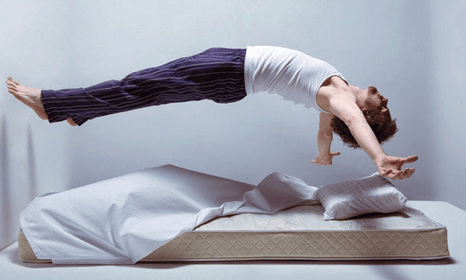 The mattress industry is rotten. It’s controlled by a handful of players that make Google-esque margins for no intrinsic reason. Through a combination of an oligopolistic market structure, heavy-handed sales techniques and opaque product naming conventions, mattress manufacturers profit far in excess of the value they provide consumers.

Just a couple of years ago, the founders of Warby Parker set their eyes on disrupting a similarly rotten industry – eyewear. They found an industry where prices and margins were unrelated to the the value the companies were delivering to consumers; just like in the $11.6 BN mattress industry. Anyone out there up for the challenge of starting a mattress company? Characteristics of An Industry Ready to be Disrupted

“The optical industry is an oligopoly. A few companies are making outrageous margins and screwing you and me.”

“Luxottica (LUX), based in Milan, is one of the heavyweights in question. It owns LensCrafters, Pearle Vision, Sunglass Hut, and the optical shops in Target (TGT) and Sears (SHLD); it owns Ray-Ban, Oakley, and Oliver Peoples; it manufactures, under license, eyewear for more than 20 top brands, including Chanel, Burberry, Prada, and Stella McCartney.”

Similarly, the mattress manufacturing market share is highly concentrated in the hands of a few players. The top four companies (Sealy, Serta, Simmons, and Tempur-Pedic) make up 59% of the industry revenue. The top fifteen mattress companies make up a whopping 81% of the market. Low levels of competition lead to consumers paying obscenely high prices for mattresses.

“. . there’s really no fundamental reason why glasses need to be so expensive. At the end of the day, it’s a couple pieces of plastic and metal. Its technology was invented several hundred years ago and there has really been little to no innovation on the product side nor the distribution side.”

“So we thought that there had to be a better way. And low and behold, we discovered that you could provide the same quality of glasses but for [a] much lower price [of] about $95. So for our customers, it would be exceptional value, that $500 product at $95.”

Like eyeglasses, mattress technology is fairly stable. Yet, publicly traded mattress wholesalers have gross margins of 41-64% (TPX, ZZ, SCSS). Across the industry, the retailers then mark up the mattresses another 96% on average (calculated from here). By the time a customer buys a mattress, it costs them ~74% more than the production cost of the product. An 74% gross margin is a lot of room for a startup to figure out how to acquire customers!

Just like the television industry, the mattress industry is notorious for selling the same product under different names through different retailers. This makes price comparison nearly impossible to do for consumers and is sort of a not nice way to operate. One exception to this is IKEA that has a very transparent product naming system that allowed us to build a price guide for IKEA mattresses.

“Warby Parker doesn’t have to deal with retailers either, whose markups can double or triple prices”

As of 2008, the latest data available, 84% of mattress sales take place through specialty sleep retailers, furniture stores and department stores. The fastest growing segment is speciality sleep retailers that make up 42% of sales. Having been mattress shopping last year, this author can confirm accounts like this one about the unpleasantness of mattress shopping. Mattress salespeople do greet you with a firm handshake and dollar signs in their eyes! A notable exception to this was at Keetsa in San Francisco where they serve you green tea and just leave you to relax on their mattresses (we bought a mattress from them, probably for this reason).

Today people buy shoes, clothes, eyeglasses, cars and just about everything online. The problem that people want to try things out in person first has largely been solved by wily entrepreneurs. Is there any reason mattress shopping should be different?

Like any startup idea, there will be objections. Shipping mattresses is expensive, people want to lie on them first, mattresses require research and development spending to develop, a mattress purchase only happens once a decade, etc. All these objections might be right, but they all sound surmountable.

The mattress industry seems to be one of those markets that comes close to violating Tim O’Reilly’s cardinal rule of business to “create more value than you capture.” Startups and the internet have the potential to completely eviscerate the incumbents in industries like this. That would be pretty awesome.