What Company Has The Fastest Growing Revenue Per Employee? 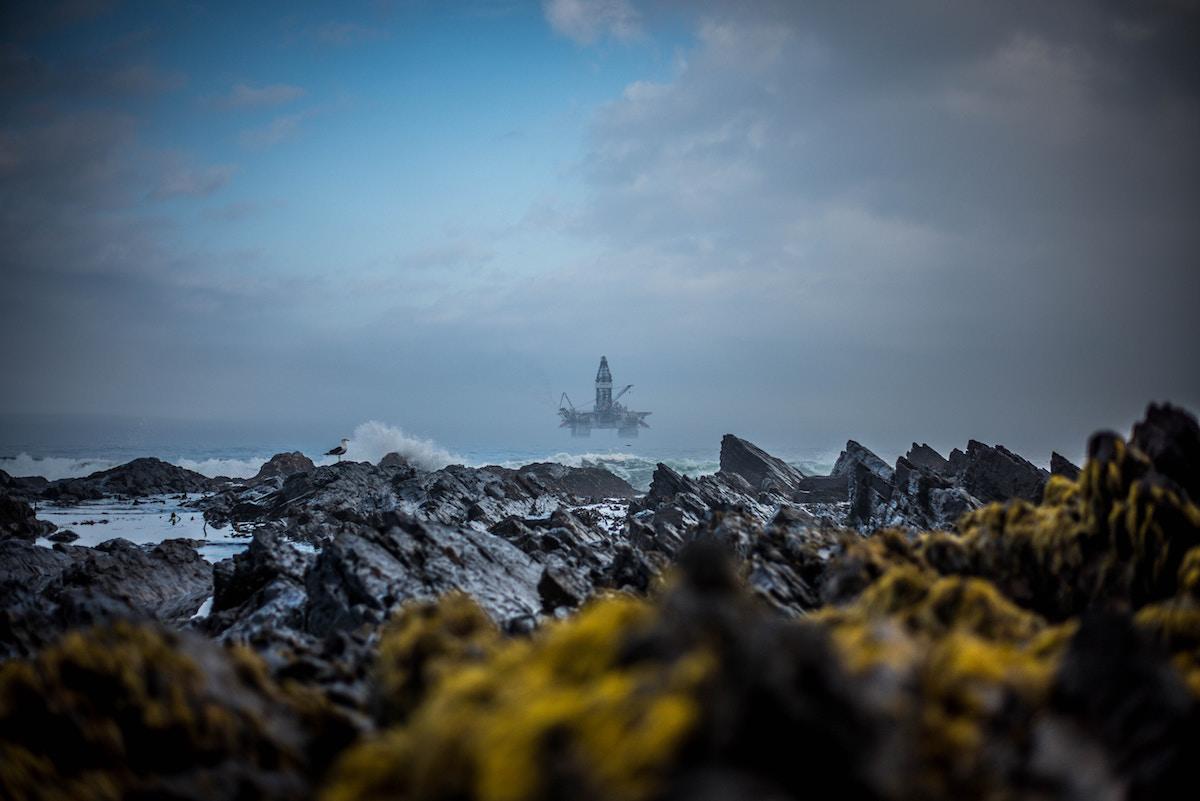 Each year, we release our Revenue Per Employee rankings for the S&P 500, the 500 largest American companies listed on the NYSE or NASDAQ. Revenue Per Employee (RPE) can be a measure of how efficiently companies utilize human capital. In this report, we will examine the top performers and the worst performers and compare to our rankings from last year.

Before we dive into the company rankings, we looked at the average Revenue per Employee by sector, to see from a broader perspective which industry has the highest human capital efficiency. 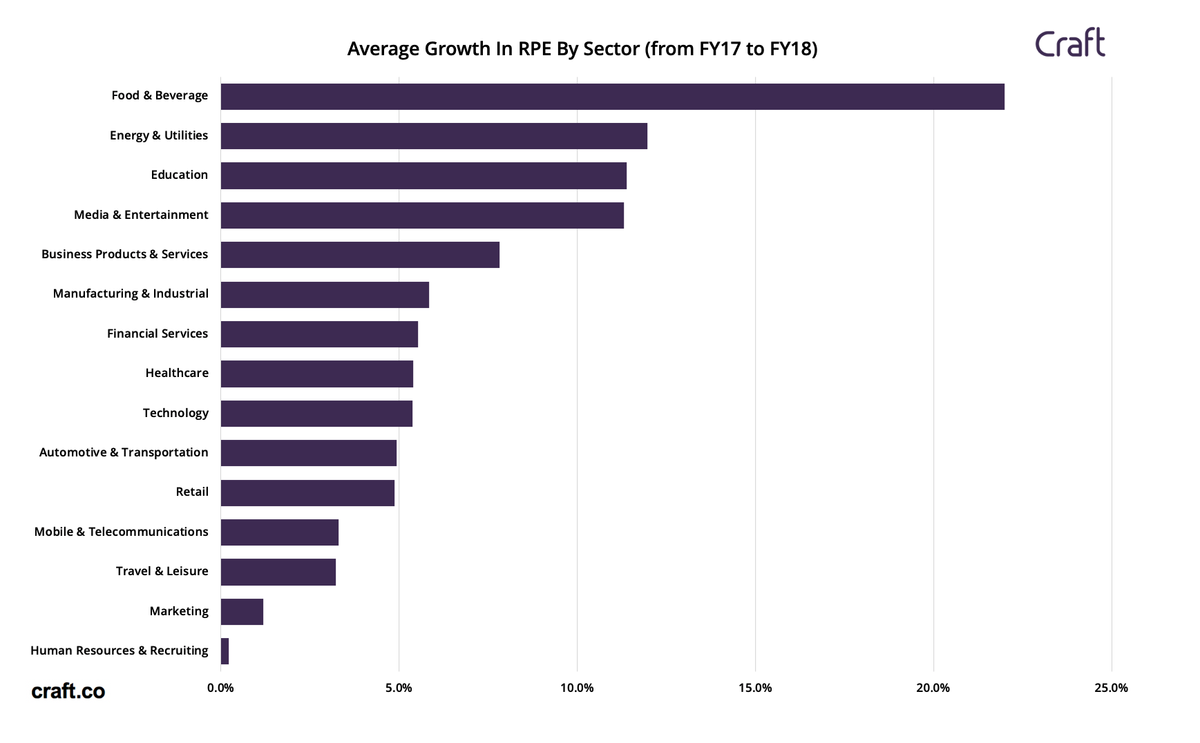 In addition to the absolute numbers, we also analyzed the average growth rate across sectors since FY17. 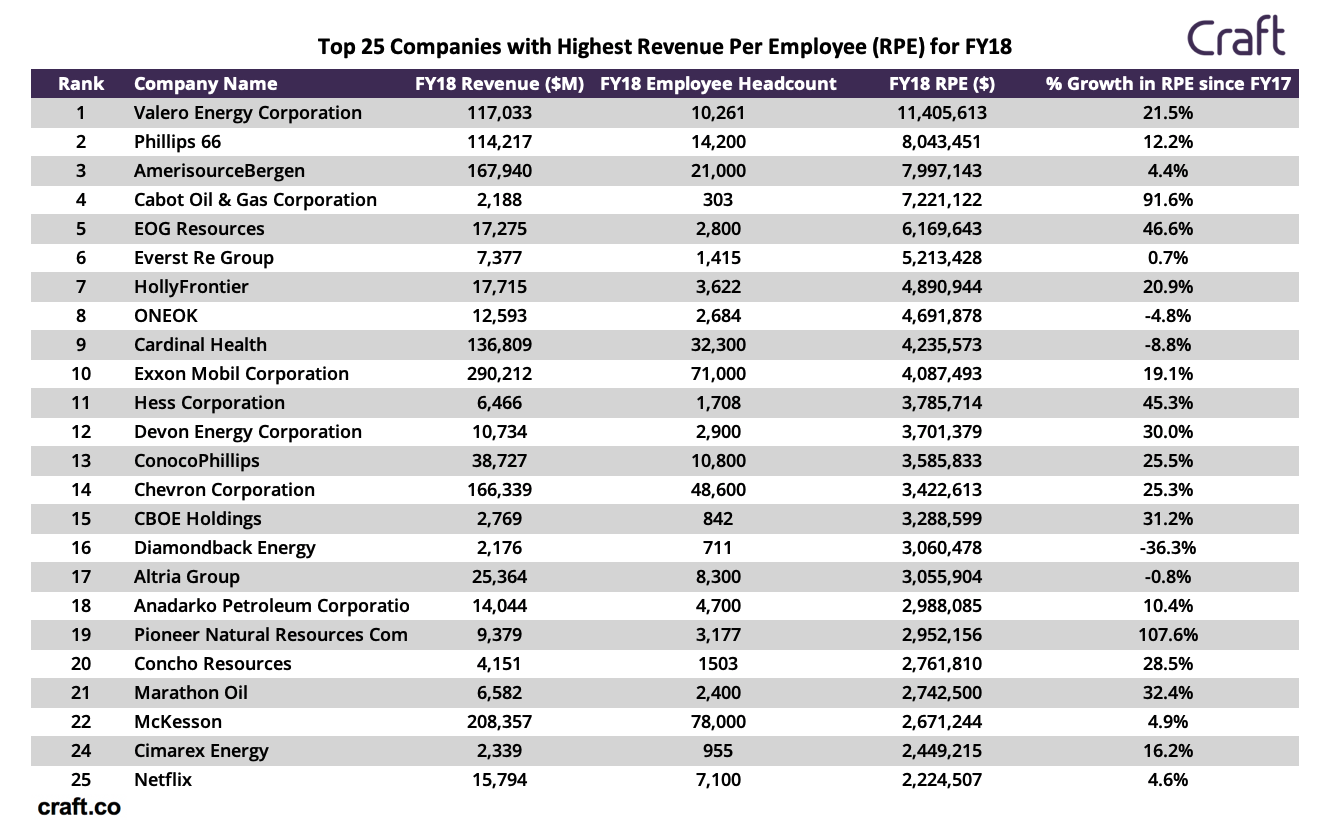 Energy company, Valero Energy Corporation, tops the chart at $11.4M in Revenue per Employee at the company. Energy companies, in general, dominate this ranking for their human capital efficiency, with 17 out of the top 25 companies in the Energy sector, including Phillips 66, Cabot Oil & Gas, EOG, HollyFrontier, ONEOK, and Exxon Mobil. Three Healthcare companies, AmerisourceBergen, Cardinal Health, and McKesson, appear on the list, as well as two Financials companies, Everest Re Group and CBOE Holdings. The sole Technology company to appear on the list of top 25 companies by Revenue per Employee was video subscription giant, Netflix. 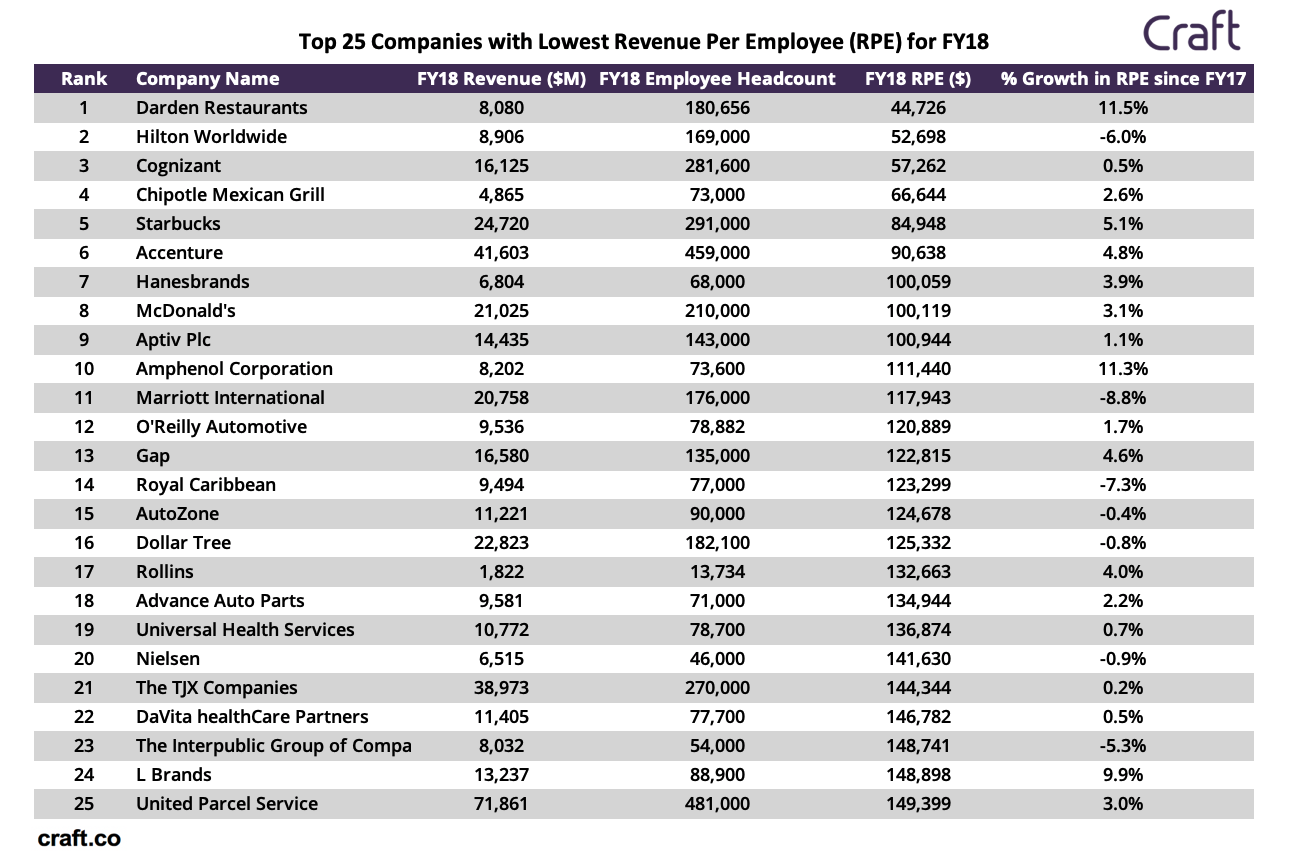 Similar to the rankings in 2017, Consumer Discretionary companies top the rankings of worst performing companies in terms of Revenue per Employee. These companies typically require larger employee headcount to staff brick-and-mortar locations to support their operations. For example, food service companies, like Darden Restaurants, Chipotle Mexican Grill, Starbucks, and McDonald’s, all appear at the top of the rankings with the lowest Revenue per Employee. Similarly, as we explored in our previous report, consultancy companies, like Accenture and Cognizant, require large teams to staff engagements and performance is largely tied to how many consultants they have to offer services to clients.

Next, we look at which companies are making the largest increases in their human capital efficiency. The table below shows the 25 companies with the highest growth in Revenue Per Employee in 2018 compared to 2017. 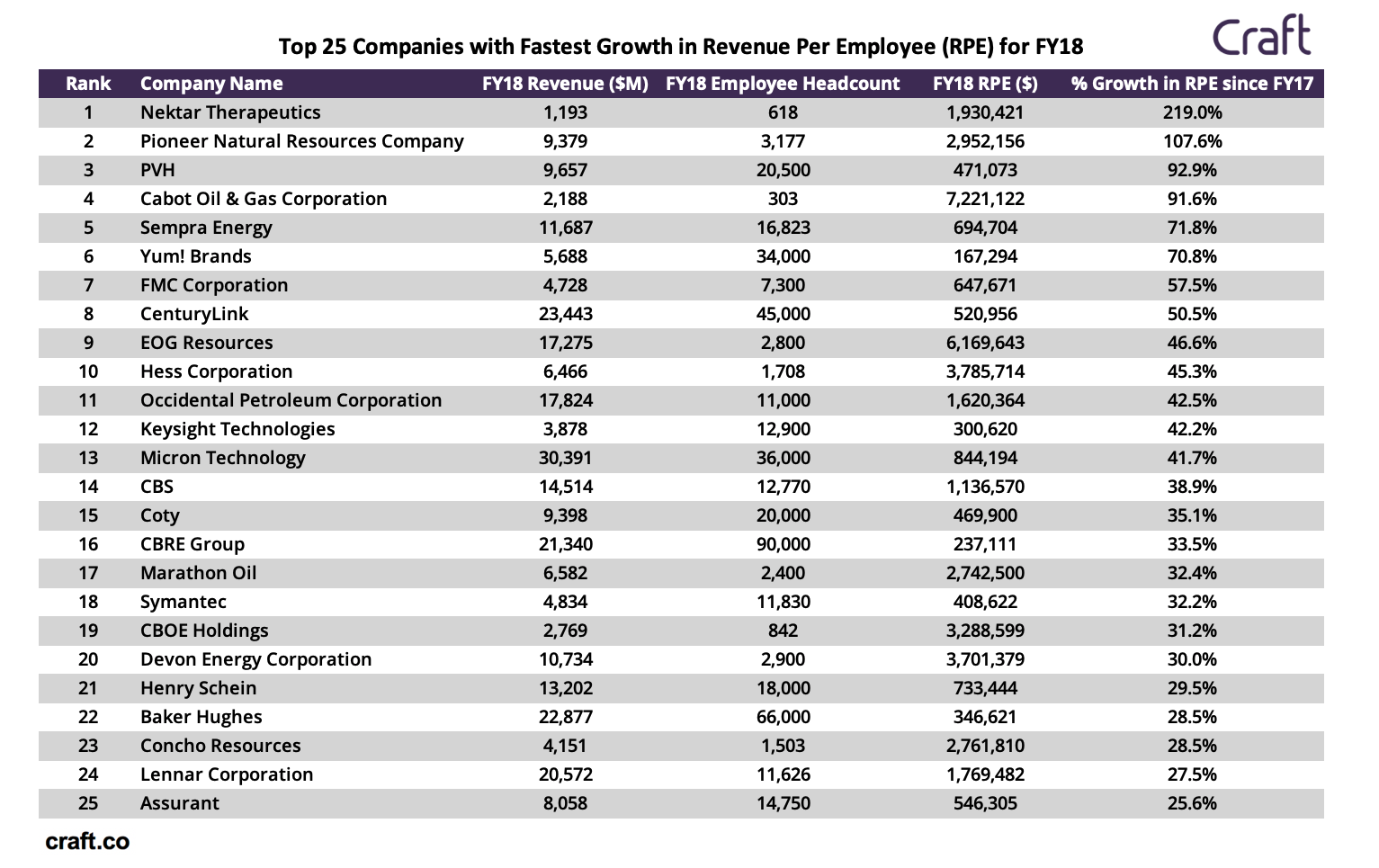 Nektar Therapeutics, a biopharmaceutical company, tops the list with 219% growth in their Revenue per Employee since 2017. Energy companies, which were the top performers in terms of absolute numbers, also rank highly for growth in Revenue Per Employee. Interestingly, Yum! Brands, parent company of KFC, Taco Bell, and Pizza Hut, was able to increase their Revenue per Employee by 70.8% in the past year. However, this was actually due to a large decrease in headcount from 50,354 in 2017 to 32,076 in 2018, according to their annual reports. The table below shows the 25 companies with the greatest decline in Revenue Per Employee in 2018 compared to 2017. 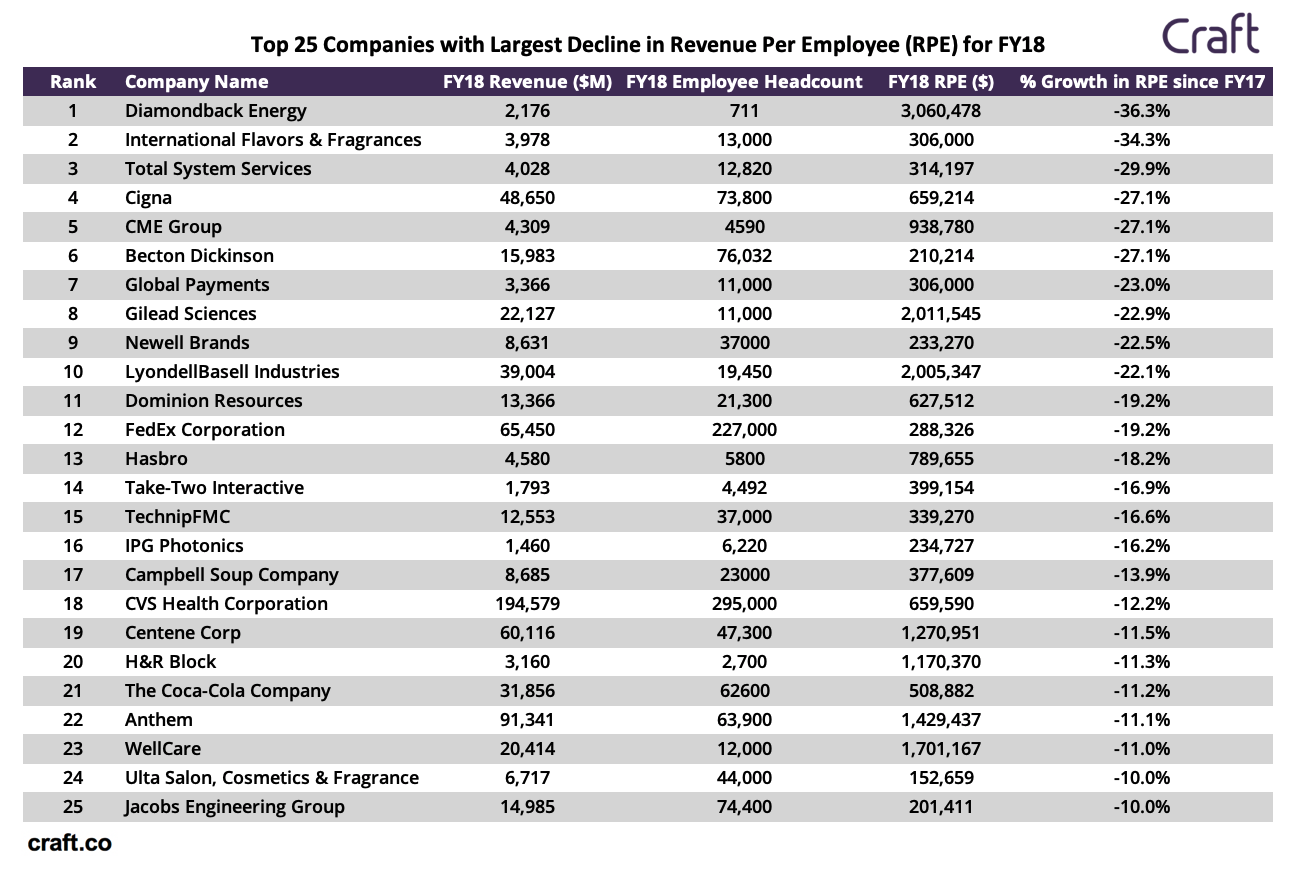 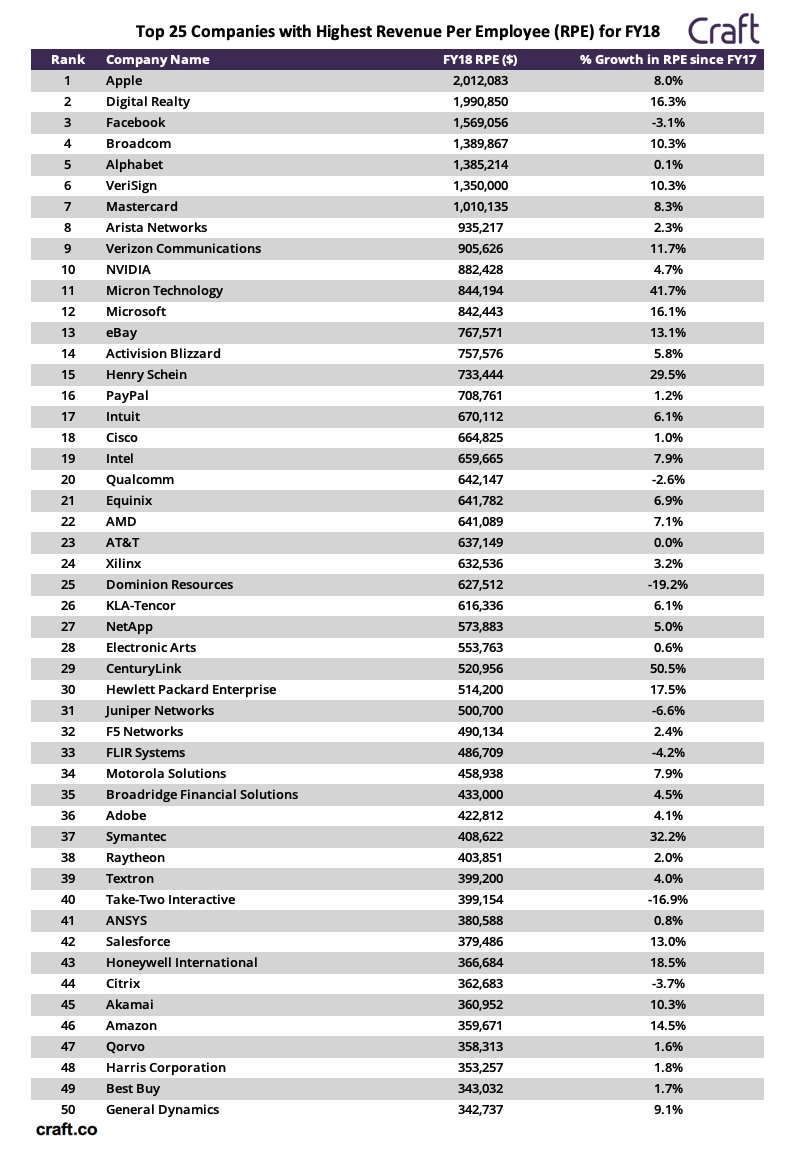 Note: We excluded a handful of organizations, primarily real estate investment trusts, from our rankings to eliminate a skew in our data, as these companies have very high revenues and low employee headcount due to the nature of their business. The companies we excluded from the list include: Host Hotels & Resorts, Welltower, HCP, Federal Realty Investment Trust, Ventas, Realty Income Corporation, Boston Properties, Alexandria, Duke Realty Group, Kimco Realty Corporation, and Regency Centers.