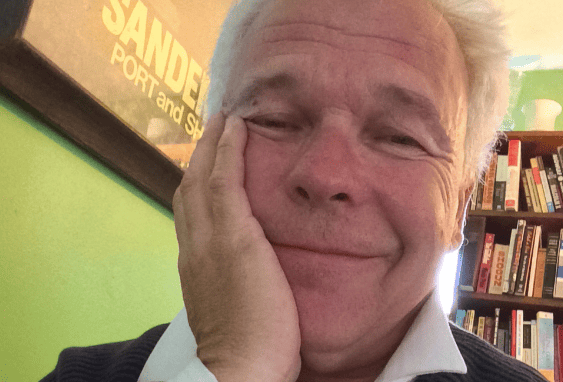 Editor’s Note: Last November, we published an essay titled “What It’s Like to Fail” by David Raether, a former Roseanne writer who became homeless. Here, he describes the events in his life since the essay’s publication.

On October 19, 2013, I scrolled through the job listings on Craigslist. It was probably around 3 a.m. I noticed an ad titled simply: “Writer.” Well, I thought, that’s me. I wonder what this one is about? The ad came from a startup in San Francisco called Priceonomics.

The job excited me. For months, I had cobbled together rent money by taking ad-hoc gigs ghostwriting for corporate blogs. But Priceonomics wanted a full-time writer who they promised to treat as a valued part of the team. It seemed like an incredibly cool company and a perfect fit for me. I sent in a long and rambling letter that pitched ideas for blog posts and included writing samples from my blogging gigs. Then I thought, I should just send them a link to my blog. It’s the best thing I’ve ever written and they are looking for a writer.

It was a risky move. My strongest credential was writing for the sitcom Roseanne. But the blog, which formed the basis of my (still unpublished) book, Tell Me Something, She Said, was about how I became homeless. It didn’t seem like the best way to introduce myself to a prospective employer: Hey, I’m David. I had this career and these awards and, oh, by the way, I spent a year sleeping in the stairwell of an underground parking lot.

But after years and years of sending out thousands of resumes (I applied to 2,613 jobs between 2003 and this past Christmas — I counted), I figured, well, they’re looking for a writer. Here I am. A writer.

The next day I got a call from Alex Mayyasi, one of the company’s five employees. He interviewed me on the phone and then told me that the CEO and founder, Rohin Dhar, would call me the next day. Holy crap! I thought. I’ve got this job! The guy who’s running the company is going to call me!

On a Skype session the next day, I exchanged pleasantries with Rohin and pitched some article ideas for Priceonomics. None seemed that appealing to him. Then he said, “Look, I’m not going to hire you.” Crushed. “You don’t really have the background to write about economics.” Then he added: “But I read your blog and it’s really good. Why don’t you publish it as a book?”

I explained that I had tried a year earlier. I sent out proposals to 20 agents and publishers, and only one wrote back. It was a copy and paste rejection letter. I put the book away and figured I would share it with my kids someday. The book described how I met their mother, landed a lucrative job in Hollywood, and lost my pleasant life in a big house with eight children. But it also described how I fought my way back from homelessness and what that time taught me. The book would be my legacy to my children: this is who your father is and what he went through.

Rohin suggested that I publish a version of my story on the Priceonomics blog. I was was hesitant. My experience trying to sell the book didn’t suggest that people were interested. He disagreed. Rohin thought my story was worth sharing.

And as far as the book?

“Why don’t you self-publish it?” Rohin asked, parroting the advice I’d received from several friends. But I knew that the book really needed an editor. It was a bit too much like me: funny and engaging and profane, but full of mistakes, scattered, and, at times, unfocused.

Rohin proposed that Priceonomics publish a short essay version of my story and that I publish the book through CreateSpace, the Amazon.com self-publishing division. The essay could drive people to the book’s Amazon page. He also said he’d pay $1,000 for the essay.

Rent and utilities, I immediately thought. No small thing given I was a month behind on the rent.

Two weeks later, I published the book on CreateSpace and Kindle Direct Publishing, made a website for myself, and worked with Alex on the essay, which Priceonomics published under the title “What It’s Like to Fail.”  Rohin emailed me just before they published the essay to say that he was so proud of the piece that he was going to pay me $1,500. Great, I thought. Two months rent!

And then everything changed.

The essay made it onto the front page of Hacker News, a news site for the tech community, and stayed there all day. Longform.org, the Reddit community, and dozens of publications all shared, discussed, or featured the piece. People shared it through Twitter and Facebook, and I began to receive dozens and dozens of emails from people all over the world who had read the essay and said they had been moved and inspired by it.

The Editor of the Times of London requested excerpts from the book. Channel 4 News in the U.K. asked to do a short segment on my life. A Dutch newspaper featured my story. Salon.com published part of another chapter from the book on Thanksgiving Day. In December, Longform named the piece one of the Five Best Essays of 2013. A review of the book on Amazon.com in the U.K. said, “Don’t read this if you have a heart because this book will break it.”

All of which became overwhelming. I found myself bursting into tears in the middle of the day. Just completely sobbing. I had completely given up on the book; now it was changing my life.

Tell Me Something, She Said is not a bestseller, but I have sold 1,283 copies and earned about $5,359. That’s many months of rent for me.

In early January, I received an email from Pat Blute, who works for a company called UberConference in San Francisco. He said the CEO of his company, Craig Walker, had read my essay on Priceonomics and wanted me to meet with the Marketing and Communications department about writing for them. Craig, it turns out, was no small deal. He had helped launch two huge products, Yahoo! Voice and Google Voice, both of which had tens of millions of customers. Now he had raised $18 million to launch UberConference. So I met with the Marketing and Communications department.

UberConference hired me to be their head writer.

After more than a decade of seeking regular, full-time employment since leaving my television writing career, I finally have a job as a writer. I write blog posts and press releases, script videos, and write and edit copy for UberConference’s website. After five years and two months of living on the streets, sharing rooms or apartments, and staying in friends’ basements or on their couches, I can finally afford an apartment of my own.

A casualty of the collapse of my career was the breakup of my family. We lost our house, and my eight kids all needed a roof over their heads. My four older children were in college or working. But two of my children who were in high school went to live with friends. My youngest two children moved to Germany with their mother, who holds German citizenship.

I haven’t seen my youngest daughter, Juliette, in five years. With stable employment and my own apartment, we’re discussing her joining me in Berkeley to finish high school. When Juliette left for Germany, she was a 10 year old girl. When she returns, she will be 16 years old and a junior in high school, and I will no longer be the disembodied voice on a long distance phone call.

The argument could be made that nothing that happened to me was in any way miraculous. As I detailed in my original essay, I left my television career for good reasons — after twelve years of grueling hours in Hollywood, I needed to focus on my family. I anticipated that it would be hard to return to the business, but I miscalculated just how hard it would be. And so, I lost my savings, my house, and my family.

I became homeless. Nothing miraculous or fatalistic about me being unable to find regular, sustainable employment. I was a run-of-the-mill failure.

I spent almost a decade failing, but I stuck with it. I kept trying to find work, kept picking up gigs when I could, kept looking forward and working hard. I wrote the book, and the reception was in line with the nature of the story and my ability to tell it. The journey back couldn’t be a complete surprise; I worked really hard at it.

No, nothing really miraculous about any of it. Except everything.

It was a miracle that I met my wife on a haphazard trip to Europe in 1981, and that we fell in love and had eight incredible children together. And that I wrote for Roseanne, one of the greatest shows in the history of television. And that after losing it all and applying to thousands of jobs without success, I found a great one when I shared my story on the Internet.

Yes, some things didn’t work out. I have not seen two of my children for five years. My marriage fell apart. I fell in love again, yet it didn’t last. Just because everything is miraculous doesn’t mean everything is perfect.

But after the trials of the last twelve years, and looking back at my life, I know where I stand on Einstein’s dichotomy. I have lived my life as though everything is a miracle.

This essay is by David Raether. You can learn more about David on his website.