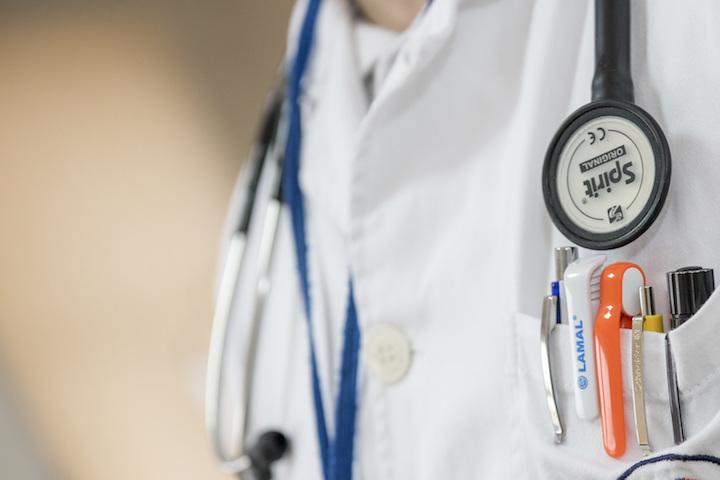 On one hand, your doctor keeps you healthy and can even save your life. On the other hand, they can leave you waiting for hours in the lobby or refuse to accept your insurance. Our relationship with our health care providers is complicated.

What makes people like their doctors? What makes them dislike them? How much do people hate waiting for the doctor to see them and how important are things like bedside manner versus technical excellence?

We analyzed data from Priceonomics customer, Zocdoc a platform for medical appointments and patient feedback, to see what people actually think of their doctors. Zocdoc asks patients for feedback on the provider’s behalf after every single appointment booked through the platform. 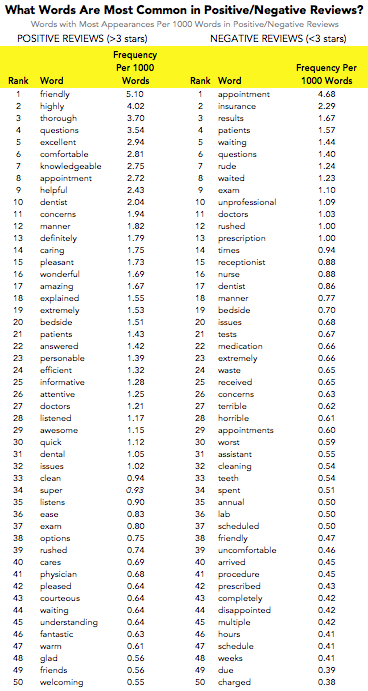 We found that attributive adjectives (words like “friendly,” “thorough” and “excellent”) accounted for nearly half (22/50) of the most common words in comments for positive reviews. When viewed in context of the rest of the comment, we found that these words were used to not only describe providers, but office staff as well.

On the other hand, attributive adjectives appeared less often in negative reviews, accounting for only 6 of the 50 most common words. The most common negative attributes mentioned were “rude” and “unprofessional.”

Taken together, this suggests that doctors with good bedside manner will earn positive reviews, but that logistical snafus, such as scheduling difficulties, long waits, or problems coordinating with insurance, can still risk turning a patient away from a provider.

Men tend to give higher reviews than women

While this initial analysis helped us understand how bedside manner and office operations impact the patient experience, we also wanted to know if characteristics of the patients themselves might influence their reviews. Do certain demographics tend to review their providers differently? We started by asking how provider ratings are influenced by the patient’s gender. 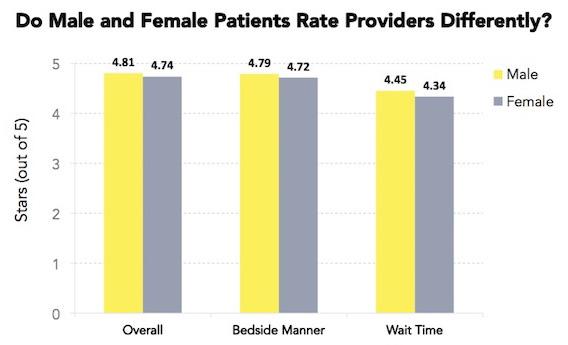 The data shows that while the average patient tends to rate their provider highly, men are more generous than women across the board. For all three categories (overall, bedside manner and wait time), males rate their providers more favorably than females. Male and female patients alike were generally more dissatisfied with wait times than with the bedside manner they received.

Another patient characteristic we thought might influence reviews is age. Are younger patients more forgiving - or more critical - than older ones? To find out, we divided our data into groups based on patient age, calculated average provider ratings, and charted the results below. 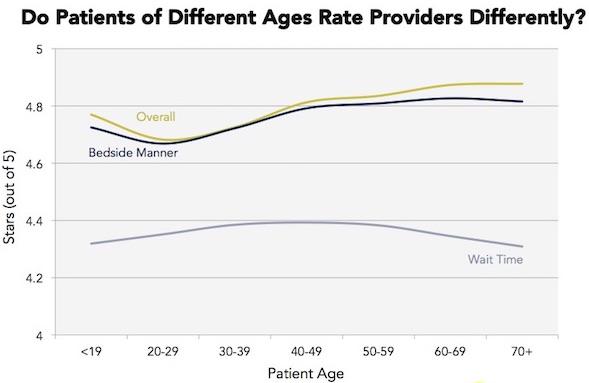 Overall perception and bedside manner ratings tend to improve as patients age. An exception to this trend is a dip in average rating during the 20s. While it could be that patients in their 20s temporarily become less generous in their ratings, it’s more likely that the comparatively higher rankings for the under 19 crowd reflect those patients’ parents’ more generous perspectives (Zocdoc allows users to book on behalf of other patients, such as children).

Ratings of wait time, on the other hand, follow a different trend than the steady increase seen for overall rating and bedside manner: young and old patients have less tolerance for long wait times than do middle-aged patients.

The chart also shows that a patient’s overall perception of their care is better correlated with the rating of bedside manner than wait time. In other words, a patient’s impression of the quality of their care is influenced more by how they felt interacting with their provider than how long they had to wait to see him or her.

Next, we wondered whether patients’ locations - and therefore the cultures they’re immersed in - might influence their perceptions of healthcare providers. To answer this, we used provider zip codes to identify the patient region of residence and calculated average ratings for each of the four major regions of the U.S.as defined by the Census Bureau: the Midwest, Northeast, South, and West. 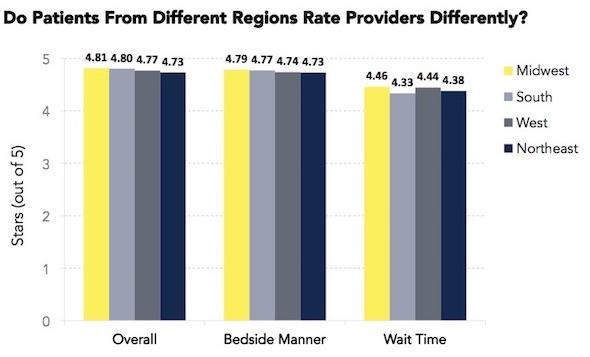 While average ratings are generally similar across regions, the highest reviews reliably come from regions known for kindness and hospitality - the Midwest and the South - and the lowest come from the Northeast.

This pattern holds for overall rating and bedside manner, but breaks when patients considered wait time. Southerners may be generous with their overall impressions of care, but have the least patience for long wait times.

We saw that patients review providers positively when they project warmth, knowledgeability and empathy. On the other hand, negative reviews are more likely to be associated with long wait times and battles with insurance. Bedside manner influences overall patient perception to a greater degree than does wait time.