What Professions Are Most Likely To Marry Each Other? 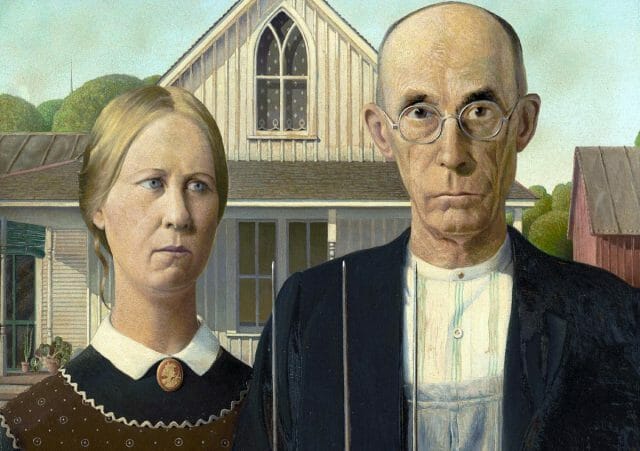 Several months ago, we examined which college majors are most likely to marry each other. Studying the relationship of majors and marriage got us thinking about where marriage and the workplace are most intertwined. We explored the data, and found that different occupations vary substantially in how likely they are to mix business with pleasure.

In order to understand the types of jobs that are most likely to marry each other, we analyzed data from the US Census. Those surveyed for the Census are asked about the occupation from which they make the majority of their income. We compiled and analyzed these responses to see how many  people with a given occupation are married to others within the same industry.

We found that lawyers, farm workers and people in education are unusually likely to marry someone with a similar occupation, while miners, construction workers and people in finance were not. Just as we found for majors, men and women in job areas where they are a minority are more likely to find love in the workplace. Male teachers and flight attendants and female police officers and carpenters have an unusually high probability of finding someone with a similar job.

According to data we collected from the 2012 American Community Survey, conducted by the US Census Bureau, approximately 87% of all married Americans between the ages of 23 and 65 reported having an occupation; 60% of these people were married, and 89% of those married people also had a spouse that was working. This amounts to over 40 million married couples in which both members have an occupation. Our analysis will be focused on these 40 million couples.

It is important to note that this analysis only looks at marriages between people of the opposite sex. Data on same-sex marriages will be available data for the 2013 American Community Survey and onwards (which hasn’t yet been released).

The Census groups professions under 25 occupational categories. They include specific occupational groups like Architecture and Engineering as well as broader categories such as Management, which includes such disparate jobs as farm managers, education administrators and funeral directors. For the most part though, these categories are made up jobs that are strongly related.

We will first examine who marries within these broad occupational categories, and later delve into the specific jobs for which people are most likely to marry each other. 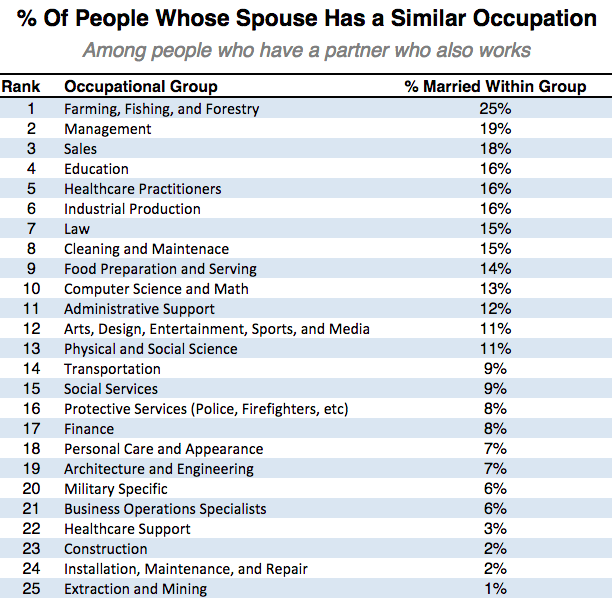 The occupation group of Farming, Fishing, and Forestry has far the highest rate of within group marriage at 25%. This industry is primarily made up of agricultural workers and animal breeders. This high rate may be because there is a less diverse mix of occupations available to people in rural communities compared to urban ones.

The professions which are highest on the list are mostly ones where there is gender balance within the industry. Sales occupations, which ranks third on the list, are almost exactly 50% male and 50% female, making it more likely that your coworkers may be of the opposite sex.

Yet gender balance does not explain the reason for all of the occupational groups with the highest probability of coupling. Those occupations that fall under “Education” — primarily teachers and librarians — are 77% female, yet still this occupational group is in the top five. As we will discuss later, males in education have an excellent chance to find love within the workplace.

Perhaps our most striking finding is the unusual rate at which people in Legal Occupations marry each other. Although only 1.2% of people in two-occupation marriages are in Lawyers and Legal Support (one of the five occupations with the fewest people), nearly 15% of these people married someone within that occupation group. There may be no better dating service than three years of law school. 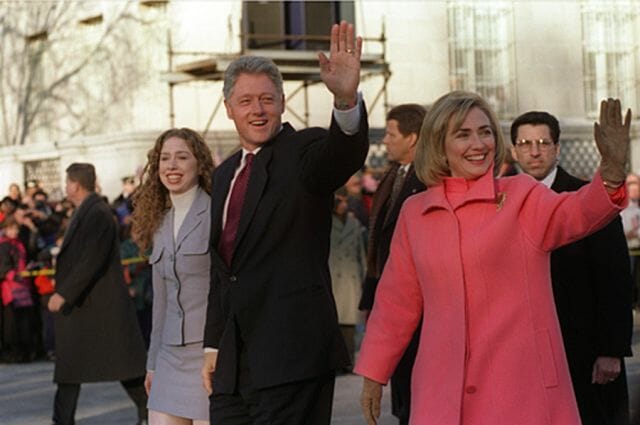 Bill and Hillary Clinton are among the unusually large number of lawyer couples.

Another example of an uncommon occupational group with a high rate of within occupation group marriage is the Physical and Social Science group. Slightly less than 1% of all people in our study are in this group, mostly academics and other researchers, but nearly 11% of them are married to another academic or researcher. For many, it’s a straight line from the ivory tower to the wedding chapel.

The likelihood of marrying within your profession varies substantially by gender. For instance,  Construction couples are relatively unlikely because there are so few women in this occupation group, but for women in Construction the probability of having a husband who works in construction is extremely high. If both members of the couple work, nearly 40% of women who have a job in Construction are married to a man in construction.

The next table shows the occupational groups for which women are most likely to be married to a man in that group. 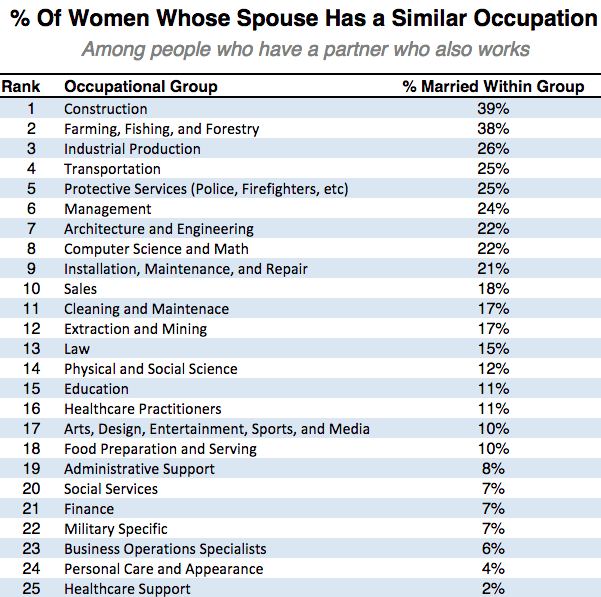 We can see that, generally, women in heavily male occupational groups are likely to have a spouse in that group. A woman with a job in Industrial Production, such as tool setters and metal furnace operators, are married to others in industry more than a quarter of the time. In contrast, women in Personal Care and Appearance jobs, like childcare workers and hair stylists, are quite unlikely to have a partner with a similar profession (only 4% of the time). 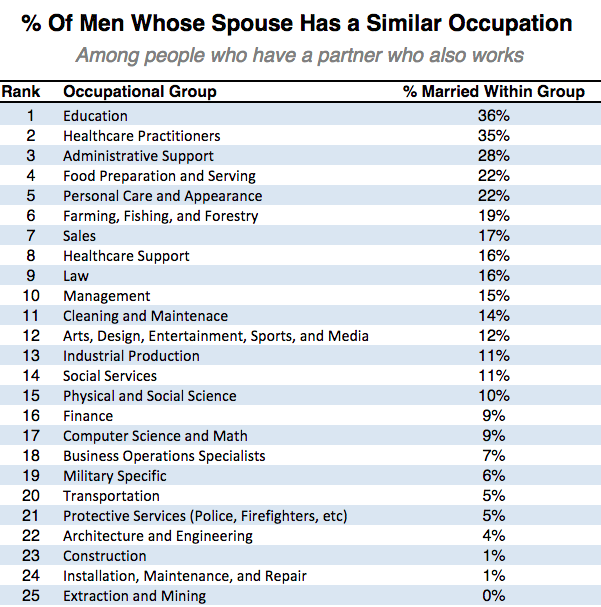 The most likely men to marry someone with a similar occupation are men in Education. Over one third of men in education, and have a partner who works, are married to a woman in education. According to one advocate of dating teachers, these men are in luck because teachers are unusually good with the in-laws from their ample experience with charming parents.

Beyond the broad occupational groups discussed above, census takers are also asked to describe their position more specifically. For example, there are 14 specific positions within in the Computer Science and Math occupational group, including web developers and actuaries. There are 500 jobs within the 25 occupation categories.

The following list shows the specific jobs for which people are most likely to have the exact same position, not just a partner in the same occupational group. We only list positions   with over 5,000 people in in two occupation households.

Agricultural workers, doctors and gaming service workers (primarily those who work at casinos) all marry others with the same job more than 20% of the time. Not only are people who work at casinos likely to marry each other, but according to another study, they are also unusually likely to get divorced.

The next table shows the specific jobs for which women are most likely to find a partner with the same job.

Female farmers/rancher are by far the most likely to marry a man with that same job. More than half of all women farmers in a two occupation marriage are married to another farmer. Farmers are so inclined to date one another that there is are dating services, like FarmersOnly.com, specifically aimed for them find each other.

This last table displays the jobs for which a man is most likely to marry someone with the same job.

Our analysis of the jobs with the highest internal coupling rates suggests there are characteristics of certain professions that make within-occupation marriage more appealing. People in farming, education, healthcare and law seem unusually drawn to each other. THis may be attributed  to the mission driven and/or time consuming nature of these professions: those with similar interest or schedules seem to mesh especially well.

Whatever the reason, our analysis shows that your choice of profession can mean much more than just what happens in our lives from nine to five.