What Time Do You Actually Get in to Work? 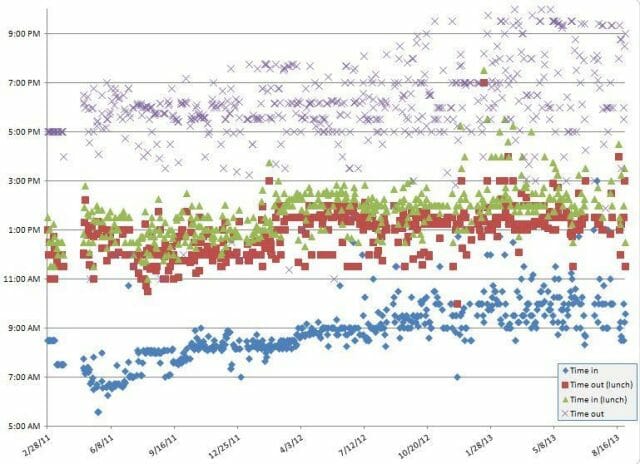 Say you had a job with a relatively flexible schedule. What kind of hours would you keep and how would they vary over the years?  Now, imagine you grew to hate your job. How would that influence when you came in to work, how long your lunch breaks were, and when you peaced out for the day?

Luckily for us, a reddit user with the user name Superm0nkey obsessively tracked the hours that he worked for three years and published the chart you see above. He didn’t like his job very much, and flextime made it easy to catch a few more minutes of sleep every morning. “I’m happy to say I no longer work there,” he wrote on reddit, where he also noted that he hated his job.

At first, Superm0nkey would get in around 7 AM. Then 8 AM.  Then 9 AM. Then almost 10 AM. Because he still had to put in his daily hours, he often found himself leaving the office as late as 9pm.  “I hated the nature of the work, therefore my strong affinity toward putting off work.”

Another interesting trend: his lunch breaks also appear to have gotten longer. Sometimes he wouldn’t come back from lunch until after 5PM!

When he was at the office, Superm0nkey hints that much of the time he was in the office was spent not actually working: “since I posted this on reddit, you can guess what I did [sometimes] at work.” Thank you Superm0nkey for sharing your data with the world.