What’s the Most (and Least) Popular LaCroix Flavor? 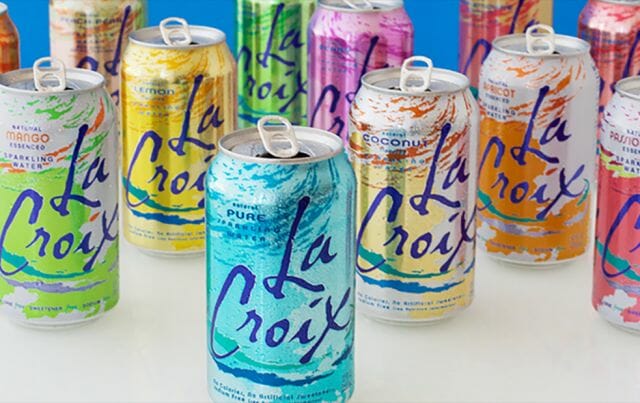 You might not expect people to be passionate about cans of carbonated water. And yet, when it comes to the water brand LaCroix, people are obsessed. LaCroix has been featured in rap lyrics, fan art, and is now stocked in the stores in all the trendiest neighborhoods in America.

Not only that, but it’s become extremely popular in offices across America, especially among Silicon Valley companies.

A startup founder (and passionate fan) of the beverages wrote on Twitter, “Out of La Croix at home. Might have to go to the office.”  Another venture capitalist remarked “Interesting new trend: people bringing their own LaCroix (often in interesting, little-seen flavors like Apricot) to meetings at our office.”

So, just how much do people like LaCroix? And what actually is the most popular flavor in offices? We thought we’d analyze our data from Priceonomics customer Oh My Green, a company that  provides companies snacks and beverages for office kitchens, to find out.

The Oh My Green data set includes kinds of companies, but skews toward technology companies based in Silicon Valley and New York. We analyzed our aggregate sales data in March 2018 to analyze LaCroix’s popularity and see which flavors sold the most and least.

Yes, we can confirm LaCroix is popular. In fact, it’s the most popular beverage sold by far and it’s twice as popular as the next water brand. Not only that, LaCroix is the single most popular brand of anything we sold on Oh My Green.

To set some context, we first analyzed the popularity of all the items sold companies for stocking their kitchens. The chart below is the percentage of sales during March of every branded item we sell. 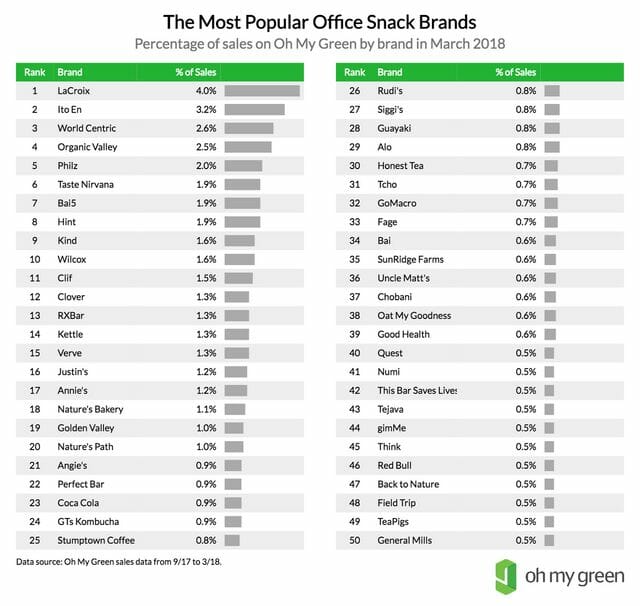 It’s much more popular than other sought-after staples like Kind bars, Philz coffee, and Honest Tea. LaCroix made up 4.0% of sales for the month, and was 25% higher than the number two brand Ito En tea.

Compared to other water brands, LaCroix’s dominance in the office is especially pronounced. The following chart shows LaCroix sales compared to its peers last month: 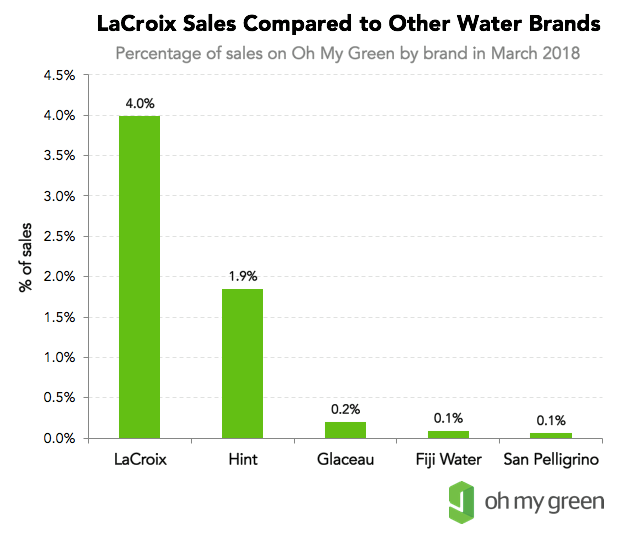 LaCroix is twice as popular as Hint, the next most popular water brand sold. We should highlight that Hint is the #9 most sold brand on the platform and still its dwarfed by LaCroix. LaCroix is approximately 40 times more popular among our customers than San Pellegrino bottled water.

Among LaCroix connoisseurs, everyone has their favorite flavor. But which flavors are most popular overall in office kitchens? We should note that we don’t carry 100% of all the flavors LaCroix manufactures, though we’ve built of portfolio of flavors based on  time based on customer flavor requests as well as top flavor suggestions from our distributor.

We looked at the last six months of sales data to spit LaCroix sales out by flavor. These the most popular flavors ranked from most popular to least. The least popular flavor in the office is Peach-Pear, making up only 1.6% of LaCroix sales. There are, however, a number of flavors we don’t carry that aren’t included in the analysis.

With LaCroix being the most popular brand in the office kitchen, one might be tempted to conclude that the brand was a rocketship conquering offices around the world.

However, when you look at LaCroix sales over time on our platform, a more complicated picture emerges. While growth has been explosive, there has been a significant plateau over the last year and a half. 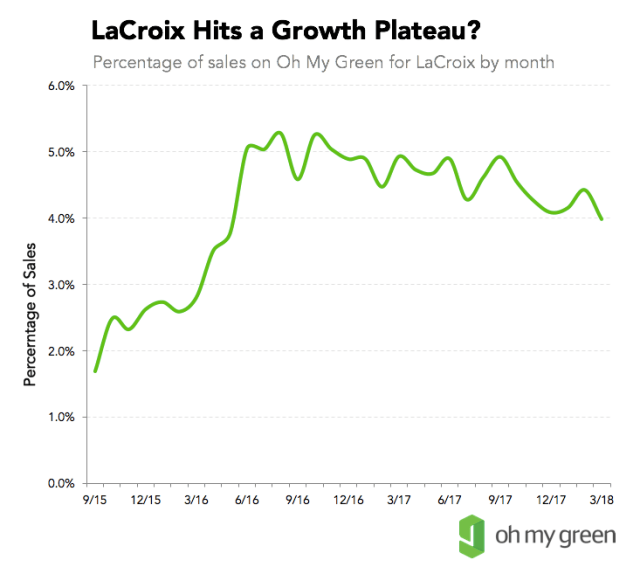 By Fall 2016, LaCroix comprised 5.3% of the sales to office kitchens on the platform. Over the last 18 months however, LaCroix sales have slowly dipped to 4.0% of platform sales. Over this time horizon, there is some evidence that the days of explosive LaCroix sales growth may have already passed.

LaCroix is still, however, the most popular item in company offices by a long shot so it’s unlikely your beloved Grapefruit flavored cans of LaCroix will be going away anytime soon.