When Does Work Actually Get Done? 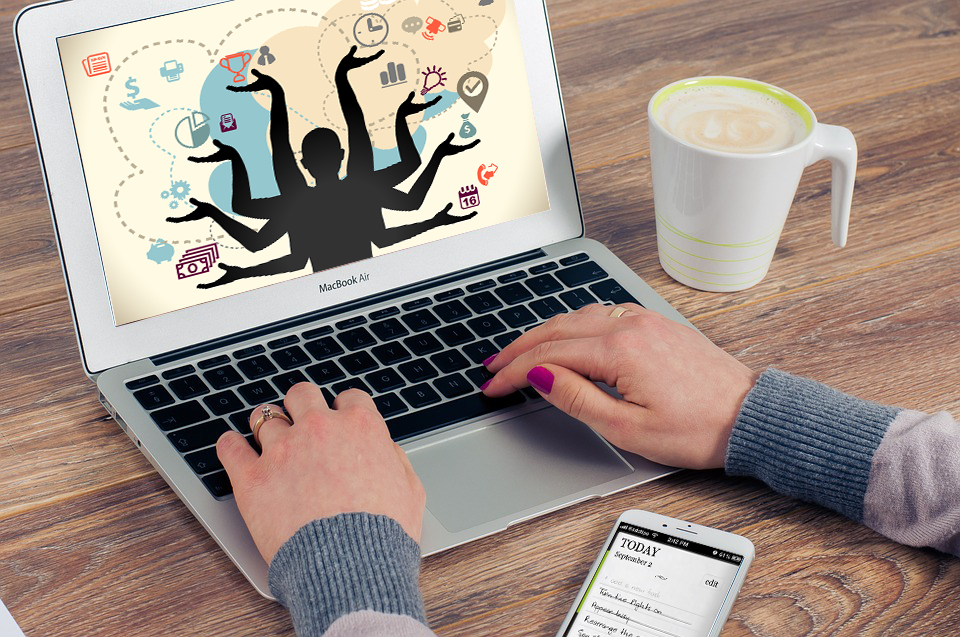 If we're going to be precise about it, work gets done at 11AM on a Monday in October. At all other times of day, we're basically slacking from our most productive.

Sustaining 8 hours-plus of intense focus year-round is more of a Herculean pipe dream than a reality of the modern day workplace. We come into the office with resolve and determination, pump out a few tasks, eat lunch, then gradually deteriorate into a potpourri of Reddit posts and cat videos.

But there are certain times where we’re more likely to get our work done.

We analyzed data from Priceonomics customer Redbooth, a project management software company, to see when people were actually creating and completing their work tasks. In this data set, users have generated over 1.8 million projects and 28 million tasks since Redbooth launched. By studying the anonymized data, we can find out exactly when we’re more likely to be productive. At what time of day do we complete the most tasks? Which days of the week are best for productivity? How about months, or even seasons?

At what time of the day do people complete the most tasks?

Let’s start with time of day. All times were normalized for their respective timezones for uniformity. 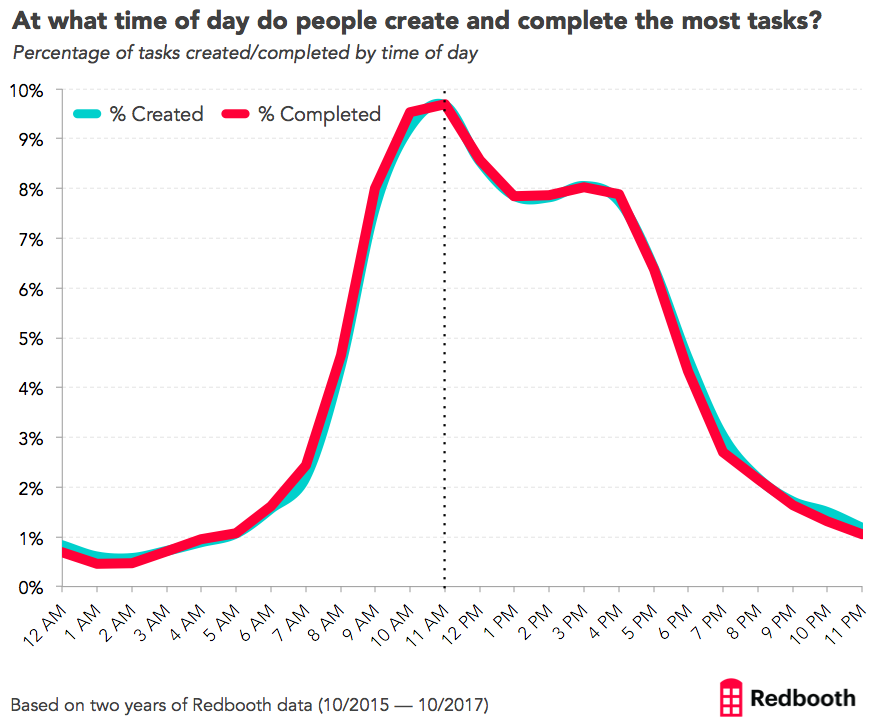 The chart gives us a clear picture of productivity over the course of an average work day.

We can see that most people don’t really get going until 7AM (a typical start time), and that after 5PM (typical finish time), work quickly tapers. Importantly though, it never fully stops: teams complete work at all hours of the day, and at least a small contingency of folks work late into the night.

The percentage of tasks completed (9.7%) peaks at 11AM -- just before the typical person takes lunch. Between 11AM and 1PM, there’s a big dip in productivity (most likely, due to lunch), and after 1PM, productivity never quite returns to its peak, confirming that “post-lunch dip” is real!

On which days of the week do people complete the most tasks? 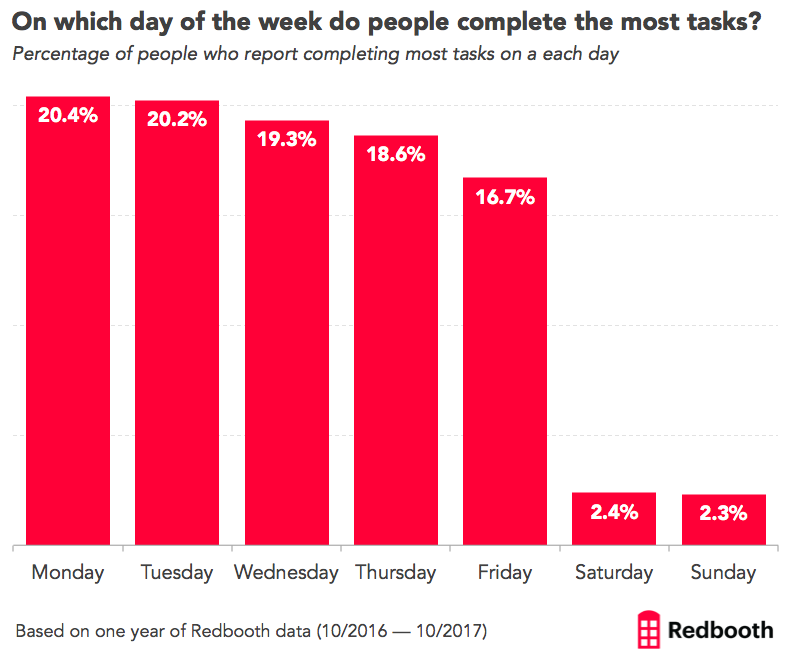 The highest percentage of tasks (20.4%) are completed on everyone’s favorite day of the week: Monday. Tuesday (20.2%) is just behind -- and after that task completion perfectly tapers off as the days progress toward the weekend.

Only 16.7% of tasks are completed on Fridays, making Friday nearly 20% less productive than Monday. And on weekends, we clearly are work averse: we collectively get about 4.7% of the week’s tasks done on Saturday and Sunday.

Given the relatively low completion levels on the latter days of the week, it’s likely that Monday is the “catch up” day at work. Studies have shown that as many as 81% of workers get the “Sunday Blues” -- or an impending feeling of dread over the work week ahead. It’s possible that this dread pushes us to work harder earlier in the week.

In which month do people complete the most tasks?

Our work productivity doesn’t just operate on a week-by-week basis: certain times of year are less conducive to getting things done than others.

In fact, there’s quite a significant difference in the percentage of tasks we get done by month.

During the workweek, we like to get things done early on. Such is not the case for the year as a whole. 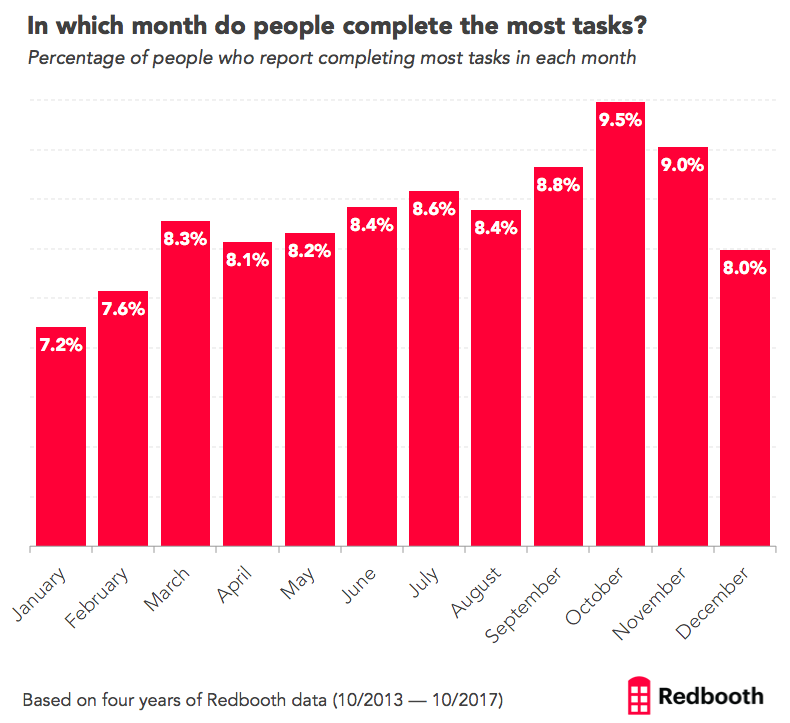 This may be because the early year is typically for setting goals, not completing them -- and as we near year’s end, we’re struggling to get everything done.

Grouping these months by seasons reveals a similar trend. 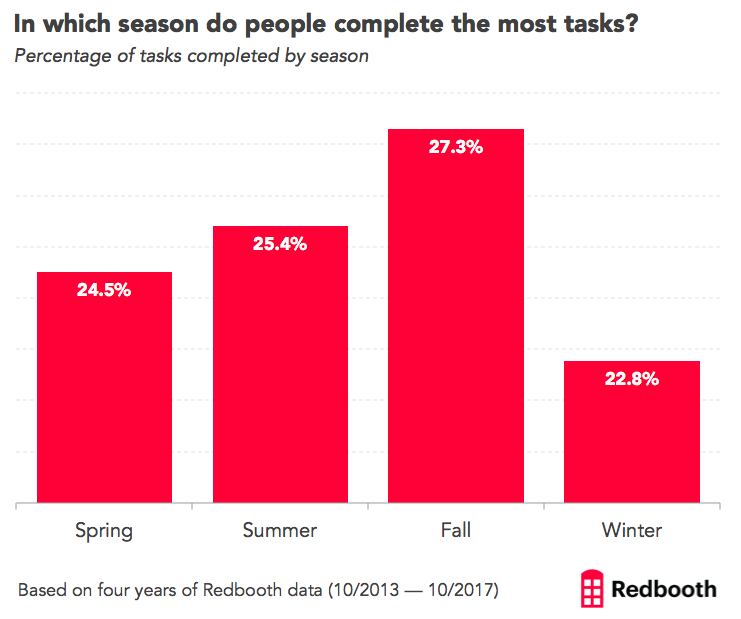 Fall leads the pack -- most likely because we’re cramming in work before the holidays in November and December.

Of course, everyone works differently, so these averages surely can’t be applied universally.

Still, they probably confirm a few things you may have long-suspected: We peak in productivity around 11AM. We get most of our work done earlier in the week. We rush to complete tasks in October, before the holiday season.

And most importantly, getting stuff done after lunch is an uphill battle.