When the Great Alpaca Bubble Burst 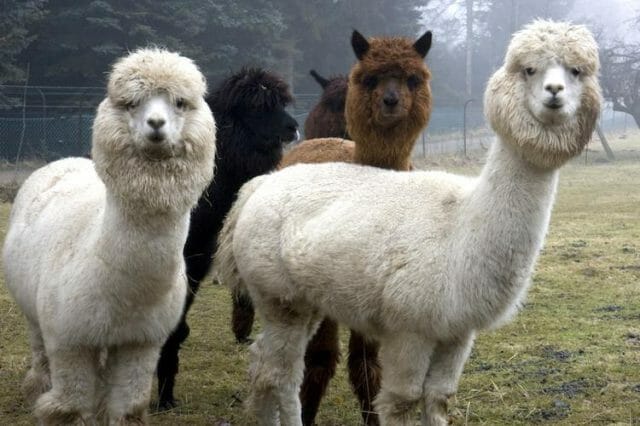 Though adorable, for many Americans, alpacas were a terrible investment, Franz Josef Heinrichs

Alpaca’s are great. They’re soft, gentle, furry giants. When they try to eat apples, it’s hilarious. Hugging one is like wrapping your arms around the foot-long neck of a warm, endearingly smelly cloud. And they make for some great GIFs.

In addition to all their positive attributes, over the past decade alpacas have been the financial ruin of Americans across the nation. Not long ago, alpaca farming was a booming industry, with the top breeding alpacas selling for hundreds of thousands of dollars. Nowadays, the few remaining alpaca farmers struggle to stay afloat. Alpaca rescues have cropped up to save the animals who have outlived their economic utility.

“Some owners have found they can’t give the animals away for free,” Modern Farmer reported in 2014.

How did this happen? The alpaca industry experienced a major speculative bubble. And, as bubbles tend to do, that bubble burst.

“The Investment You Can Hug” 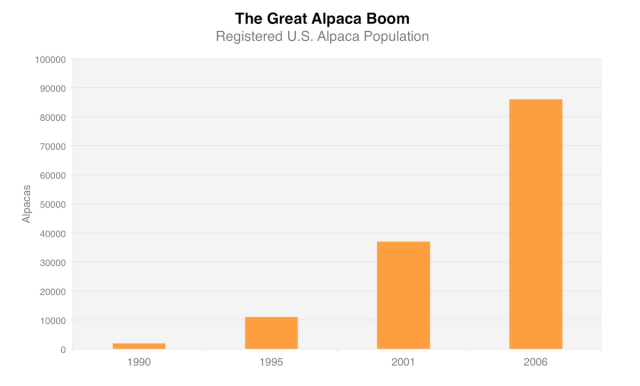 The American alpaca industry was born in 1984 when the first alpacas were brought to the United States from South America. After a few years, the industry quickly started to boom. In 1991, there were around 2,000 alpacas officially registered in the United States. By 2006, there were over 86,000.

As livestock, alpacas are primarily valued for their “fiber” — the industry term for wool. Because it was so new to the country, the domestic infrastructure to efficiently process alpaca fiber was relatively poor. Even at the industry’s peak, farmers and fiber co-ops had to outsource a lot of their processing to Peruvian facilities, which significantly cut into their margins. In 2005, even the highest-grade raw alpaca fiber only went for $5 a pound at volume.

The real money was in breeding: raising alpacas to produce more alpacas. Female alpacas can give birth about every 18 months, and average 7 offspring over a lifetime. Those offspring, depending on their gender and the quality of their wool, could sell for a lot of money. Breeding stock alpacas went for an average of over $25,000, and as much as $750,000 at auction, it didn’t take long for a breeding operation to turn a profit.

Part of the reason alpaca breeding was so profitable in the United States was because imports of live animals are heavily regulated. This is particularly true when it comes to countries like Peru — the country with the largest alpaca population in the world. Peru was a known location of foot and mouth disease, a disease that plagues livestock. Imports of ruminants — alpacas included — were banned. Supply was limited.

The other thing that made breeding so profitable was that everybody wanted in on the alpaca business. Demand for alpacas, in order to raise them, was skyrocketing.

Year by year, more and more people wanted to raise alpacas, partially because the alpaca industry advertised the benefits of alpaca farming. The associations that sponsored these ads say they wanted to promote breeding to improve the genetic diversity and quality of the American alpaca population. They took out television ads, and late-night television ads, promising an easy out from the urban rat race, calling alpacas, “the investment you can hug.” 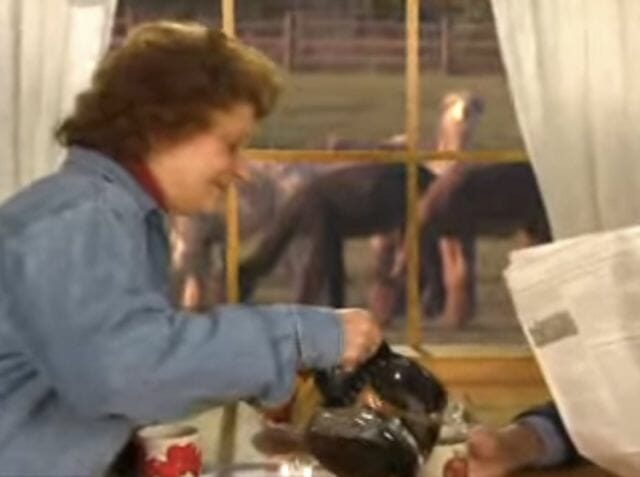 “Wake up to the wonderful world of alpacas,” the narrator of a 2006 television commercial says. A peacefully grazing herd of alpacas is video edited “outside the window” of a breakfasting, retired couple. The commercial was paid for by the Alpaca Owners and Breeders Association (AOBA).

“It’s such a great feeling to wake up in the morning, know I can step out of bed, drink my cup of coffee, look out the window: There are my alpacas,” a nurse-turned-alpaca-farmer says to the camera. “And I step out the front door and I’m at work. I don’t have to put on a suit or a uniform. It’s a wonderful business.”

Yet another part of the deal — and a big part of it for more than half of alpaca owner — was that raising alpacas had tax benefits. The U.S, and many state tax systems have incentive programs to encourage small farms, and alpacas are officially recognized farm animal by the federal, and many state governments. Compared to other farm animals, alpacas are “relatively docile” and easy to maintain, as libertarian pundit Jon Stoessel observed in a segment against these tax breaks. Somebody could easily put a few alpacas on his property, maybe hire somebody to manage and trade them, and significantly shrink his taxes. Quite a few did: “a California alpaca farm” became a euphemism for a tax shelter. 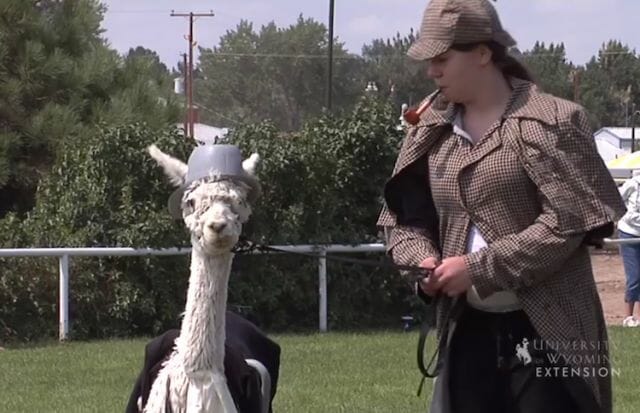 Sherlock Holmes and the alpaca Dr. Watson, at the costume event at an alpaca show

Due to a clause in the Jobs and Growth Tax Relief Reconciliation Act, passed in 2003, the tax benefits to an aspiring serious breeder were even greater. From an article on an alpaca breeder’s website:

“The fact is that Uncle Sam will pay for a portion of the cost of acquiring your herd, assuming you are currently paying income tax and plan to continue paying income tax over the next six years. You can write 100% of your original purchase price off, up to a maximum of $250,000, in the year of purchase.”

If it all sounds too good to be true, that’s because it was.

This is when farmers like the Silvers, a retirement-aged couple in Oregon, got into the business. The couple sank their “life savings” (about $750,000) into a growing herd and building a barn. From an article in the Seattle Times:

“We never were able to sell any,” says Silver.

The Economists Put on the Breaks 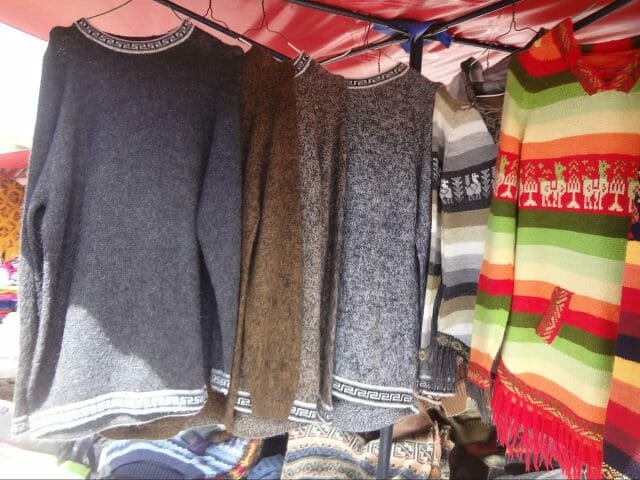 An adult alpaca produces 6-8 pounds of fiber per year. A women’s alpaca sweater on Amazon weighs about 1.1 pound. How much are you willing to pay for that sweater, and how many of those sweaters do you need per year?

The limits of the domestic fiber market were well-known among American alpaca farmers. But there was a commonly-held belief that it was only a matter of time before infrastructure caught up to the volume of raw fiber farms produced.

In a 2006 paper titled “Alpaca Lies? Speculative Bubbles in Agriculture: Why They Happen and How to Recognize Them,” UC Davis researchers Richard Sexton and Tina Saitone noticed that the price for an adult alpaca at auction didn’t make sense, given the price of alpaca wool. They calculated that the revenue from the sale of alpaca fiber would need to increase 20% a year, over several years, for the observed live-animal prices to be justified. This would require demand for fiber to grow at a rate “almost unprecedented” for an agricultural product. 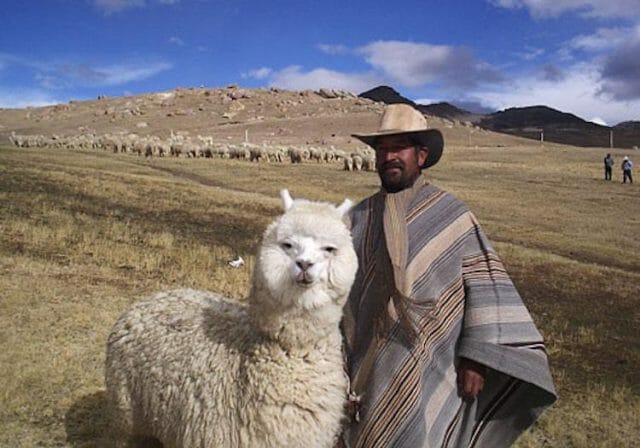 Sexton and Saitone’s conclusion that the alpaca industry was experiencing a massive speculative bubble. In short, people were investing in alpacas — a production asset — at a rate the market for alpaca fiber — the product — just couldn’t support.

“The alpaca industry will never be profitable, even if everybody decides to start wearing alpaca,” Sexton told Marketwatch in 2007.

This coverage earned the researchers quite a few enemies in the alpaca world. They later reported that somebody accused one of them of being a, “disgruntled alpaca inseminator from Florida.” While that’s a pretty jerky thing to allege, the researchers have noted farmers were only dealing with the “cognitive dissonance” their research caused them, in contrast to the farmers’ beliefs. And many of them were about to pay dearly for not heeding the economists’ warning. Coinciding with the paper’s publication, the bubble burst almost immediately. Following the publication of the study, the average auction price of an alpaca went down every year by thousands of dollars. Alpacas cost money to house, feed, and maintain. When their value plummeted, they stopped paying their own bills, and farmers struggled, often resulting in tragedy.

Nothing illustrates this better than the Silvers in Washington, who had sunk their life savings into a farm. From Modern Farmer:

“Last winter, the Polk County Sheriff’s Department raided the 21-acre ranch, located in the rolling foothills of Oregon’s Coastal Range. There, deputies found 16 dead animals and evacuated about 175 more. Many were so skeletal that their backbones stuck out from their once-fluffy backs.”

The Silvers were not an isolated case. “The recession has caused a lot of problems and a lot of desperation,” the head of an alpaca rescue organization told the Seattle Times in March of 2014. “People are quietly putting them in their freezers if they can’t get the hay and water. They feel it’s more humane that way. It’s a really, really heart-wrenching reality.”

While tragic, the alpaca bubble was by no means unprecedented. In their 2006 paper, which they followed-up with another study in 2012, Sexton and Saitone noted that bubbles like these are common in agriculture. Not long before the alpaca bust, ostrich farmers were investing in their farms, preparing for the day when ostrich burgers were as common as beef burgers. And, in fact, agricultural speculative bubbles stretch far back in American history, to the pre-Civil War Era (Merino sheep, Berkshire hogs, Broom corn, and Rohan potatoes.) 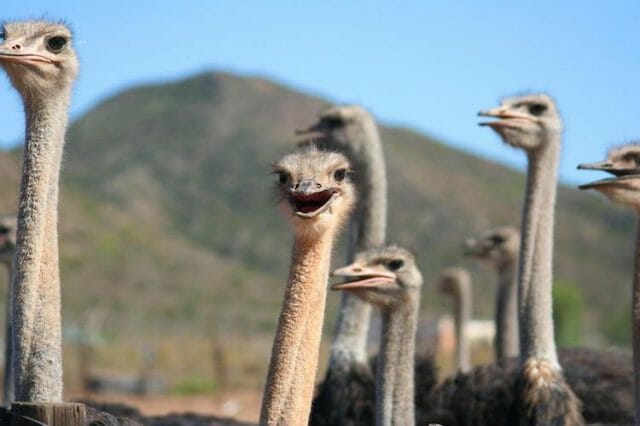 Ostriches are like alpacas with (irrelevant) wings, Michael Day

For future farmers, Sexton and Saitone laid out some of the major hallmarks of a speculative bubble, including: (1) The asset not the product is the thing being marketed (i.e. live alpacas, not fiber), (2) investors have unrealistic expectations (alpaca fiber would replace wool, despite the lack of infrastructure; and besides the fact that people don’t really wear that much wool), (3) information is controlled through industry sources (most of the information the researchers were able to dig up was put out by breeding associations), (4) small scale investors predominate (Foster Farms did not open an alpaca plant).

In the meantime, the remaining alpaca farmers are getting creative. Even if the market for alpaca fiber might never make the industry profitable, farms might do better if they can sell the meat, milk, and leather. Maybe they should borrow a trick from Japan, and rent them out for weddings.

Our next post analyzes a bunch of data to figure out who is the most popular New York Times Columnist. To get notified when we post it, join our email list.