Where Are All the White People in San Francisco Public Schools? 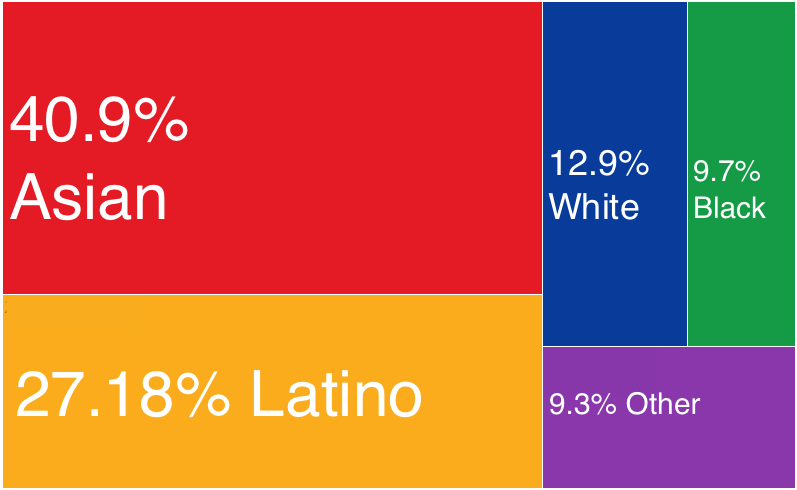 Recently, our friends at San Francisco Public Press connected us with a really interesting data set: the demographics of San Francisco public schools. There were a lot of eye-opening statistics in the there. For example, in 2014, 58% of the students at public schools qualified for free or reduced-priced lunch based on their families income level -- a shockingly high number of a city going through an economic boom.

In San Francisco, 41.6% of the overall population is white, according to the Census estimate for 2013. Of the city’s population age 19 and under, 28.7% are white. So you might expect, like we did, that white students would make up about 28-30% of the public school system. 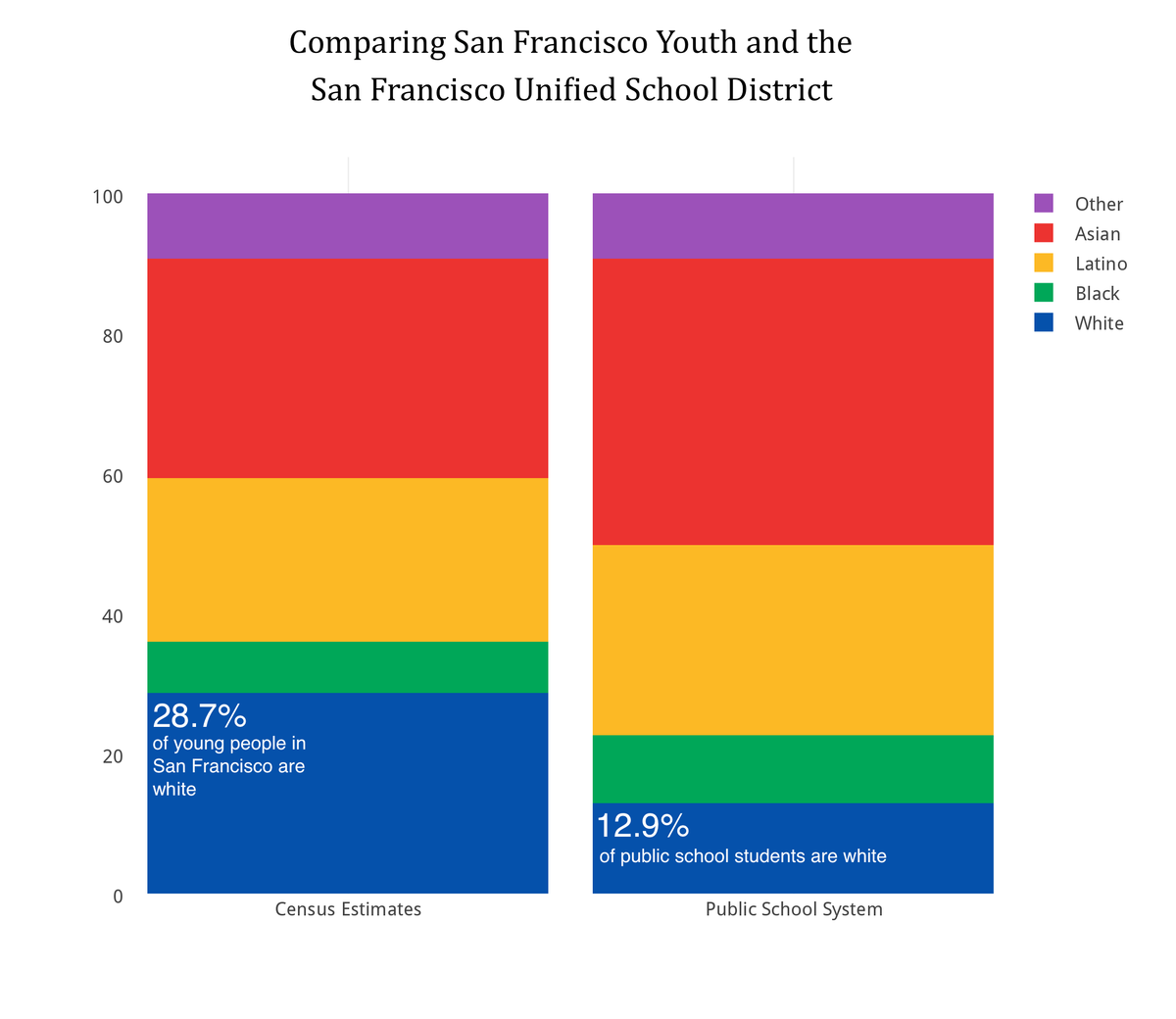 San Francisco public schools are far less white than we expected them to be, whereas all other major racial and ethnic groups are over-represented.

Where are the White People in San Francisco Public Schools?

San Francisco Public Press has a hypothesis about why there are so few white students in the public school system: white San Franciscans are more likely to be able to afford private school:

The average white San Franciscan makes three times more money than the average black resident. Whites on average also make 66 percent more money than Latinos, and 44 percent more than Asians. Possibly as a result of this wealth, white children are much more likely to be enrolled in private schools than other racial groups.

But this isn’t the whole story. It turns out that the white students who are in the public school system tend to be found in very particular places. Mainly, they’re in San Francisco’s elementary schools: 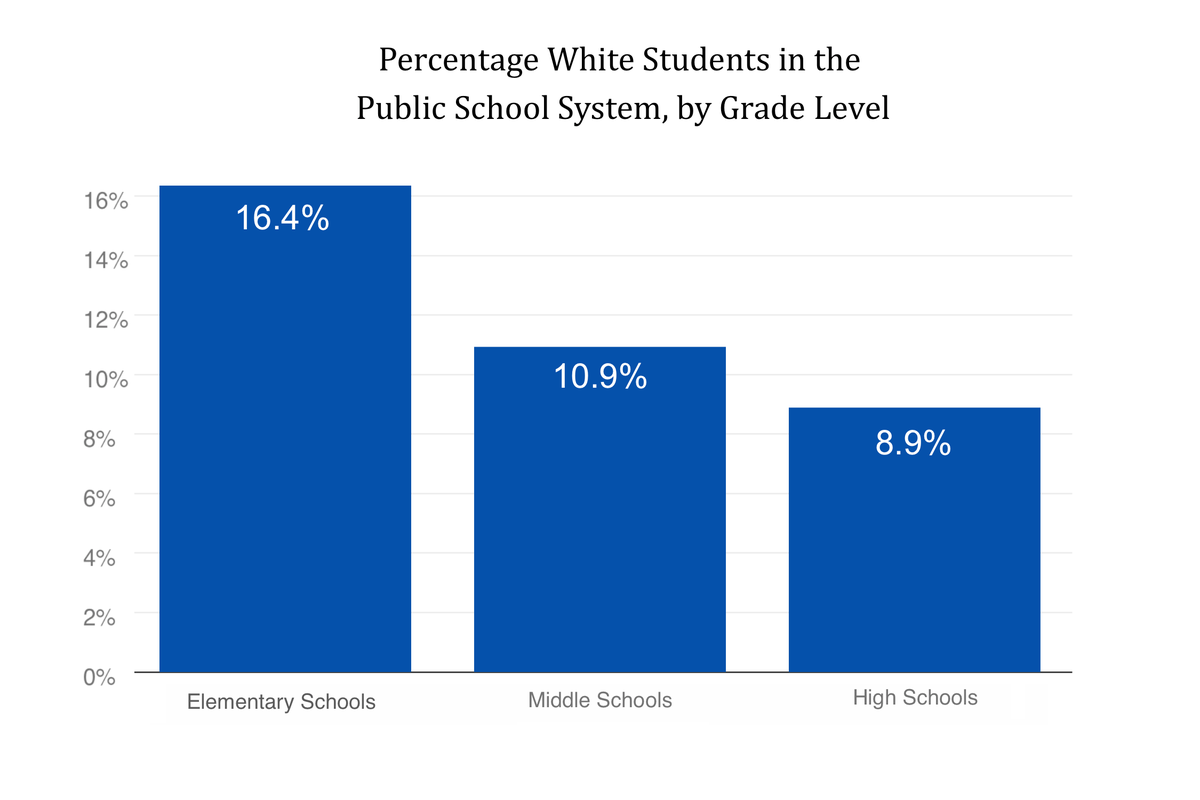 Ratio of white students in San Francisco public schools at different levels of education, 2013-2014. White students make up less of the student body at schools with higher grade levels.

At the elementary level, the overall student body is about 16.4% white, far above the district average. But by middle school that number drops to 10.9%. By high school, only 8.9% of students are white.

The admissions process to most public schools in San Francisco involves more randomness than in most school districts. Getting into a mostly-white school in San Francisco isn’t simply a matter of moving into a mostly-white neighborhood. Parents rank their top choices, and are matched with schools based on the schools’ capacity, with a complex system of rules mixed with randomness to settle ties. Many refer to the process as “the lottery.” 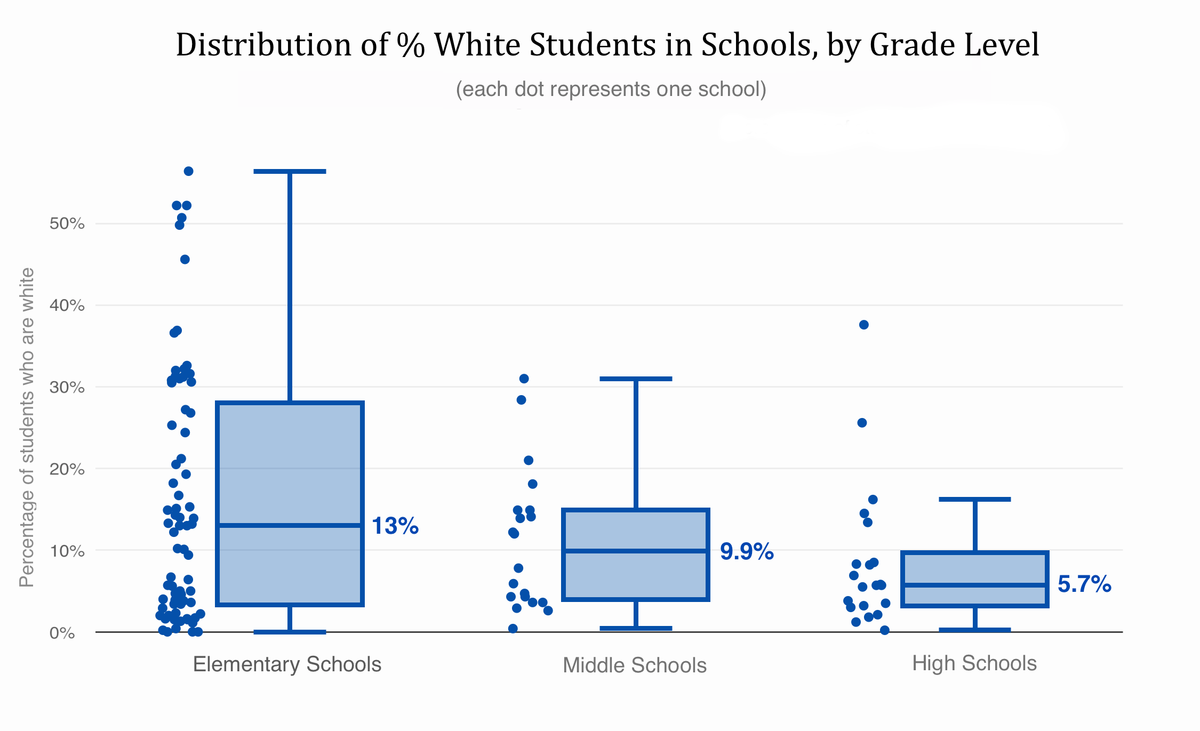 The different levels of school also have different distribution tendencies in their rate of white students, 2013-2014. The median percentage in elementary, middle, and high schools is 13%, 9.9%, and 5.7%, respectively.  (Compare these to mean percentages, presented in the previous bar chart: 16.4% in elementary schools, 10.9% in middle schools, and 8.9% in high schools.) 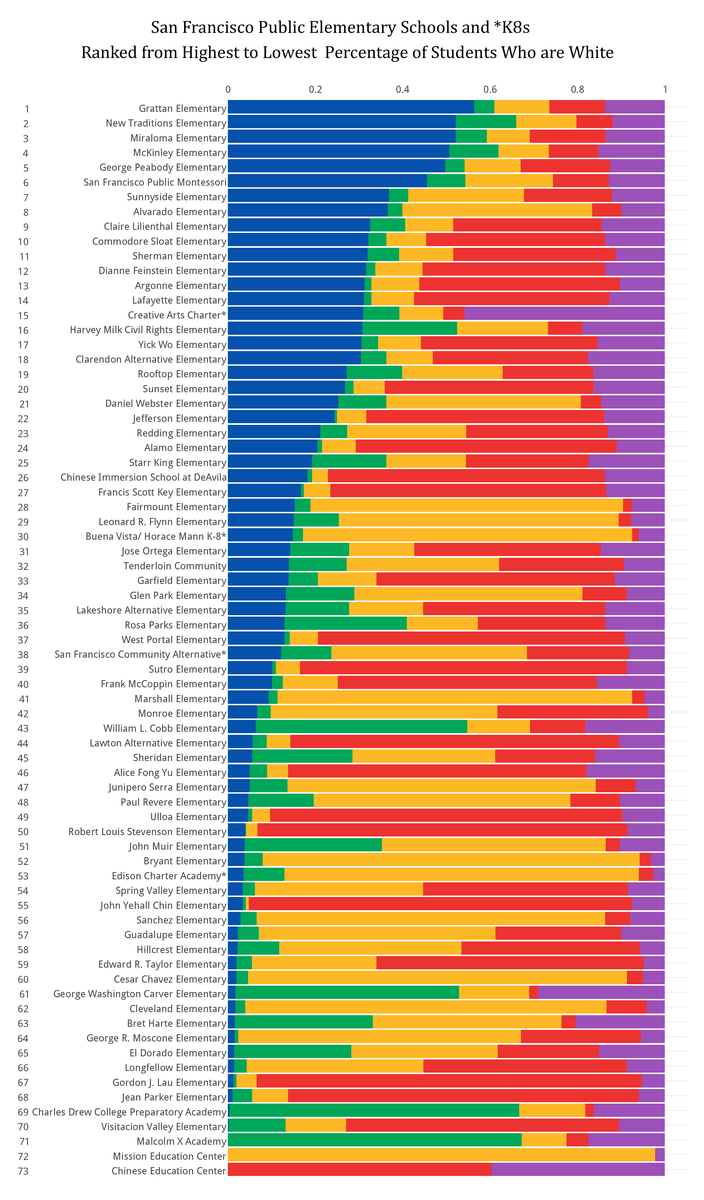 San Francisco elementary schools and K8s, ranked from most white to least white, 2013-2014

So while elementary schools may appear to be more diverse than middle and high schools, this is deceptive: The white students in the district are clustered into a handful of elementary schools -- such Grattan (which is 56% white), New Traditions (52%), and Miraloma (52%.)

According to Public Press, more affluent families tend to be savvier at the admissions process, and also tend to have the luxury of more flexibility with their preferences. For example, they’re more likely to be willing and able to transport their kids across town every day, if it means attending a particular school. “We have options,” one parent told Public Press, about the kindergarten admissions process. “We can send our kids to private schools. We can travel across town. Not every parent can.”

Those options usually don’t go away as a student ages. If at any point the process doesn’t shake out the way an affluent parent wants, they can just drop out, and shell out for a private education for their child. And, the data suggests, that’s exactly what they do.

So we have our answer: white students in San Francisco public schools are mostly in the elementary schools, and only some of them. As these students get older, they tend to exit the city’s public school school system. The result that the school district’s resegregation gets more severe as a student’s level of education gets more advanced.

“If parents have inadvertently helped to resegregate the schools by seeking the best opportunities for their own children,” the Public Press writes, “it may take individual and collective efforts by those same parents to create the diverse public schools many of them say they want.”