Where are Plastic Bags Banned Around the World?​ 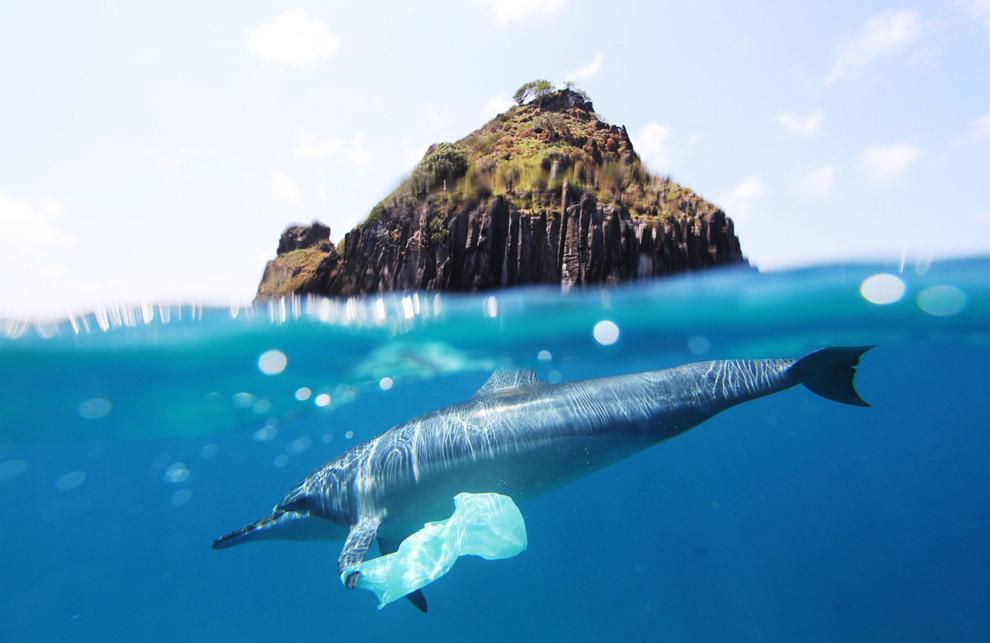 The average plastic bag you pick up at the grocery store, or carry your takeout in, has a lifespan of about 12 minutes. When discarded, they clog sewage and storm drains, entangle and kill an estimated 100,000 marine mammals every year, and degenerate into toxic microplastics that fester in our oceans and landfills for up to 1,000 years.

Shoppers collectively use around 500 billion single-use plastic bags every year. That’s 150 bags per person, per year, for every single person on Earth — or enough to circle the globe 4,200 times.

Notably, we’re starting to see communities around the U.S., and the world, mobilize to reduce waste by banning, taxing, or otherwise limiting the use of these plastic bags. How common are these "plastic bag bans" and is there any data about how effective they are?

We analyzed data from Priceonomics customer Reuse This Bag, a company sells reusable bags, to take a big-picture look at where legislation has been passed, and what its  effects have been. Which cities in the US are leading the way for plastic bag bans? Internationally, which countries have made the most significant push?

Plastic bag legislation in the US

Many lists of plastic bag bans exist online — but most are convoluted and hard to understand. In assembling our data, we drew public information from the National Conference of State Legislators and a number of state-level, and country-level reports.

Let’s start with the United States. 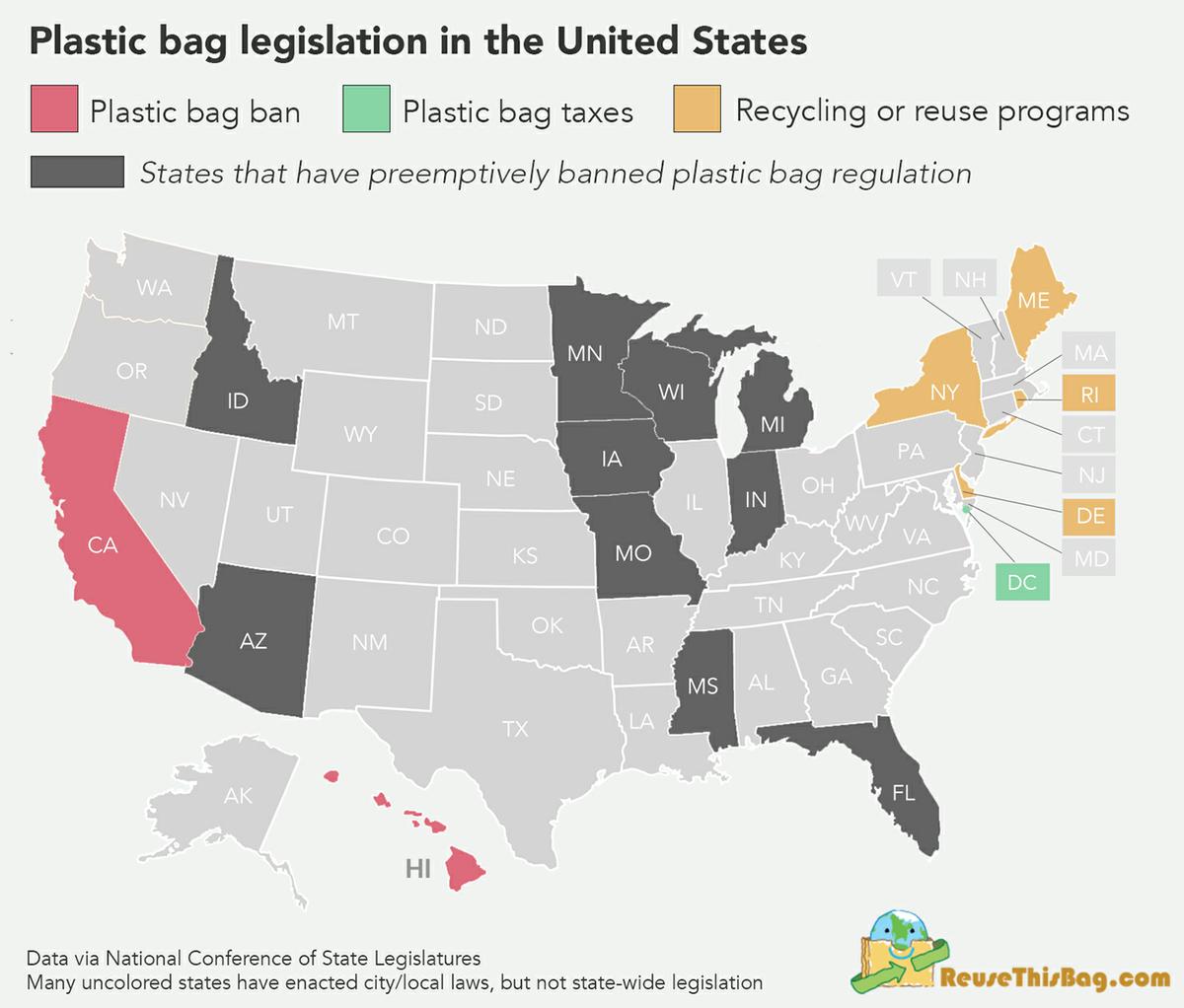 Though Hawaii’s ban came first, it wasn’t technically a state-wide ban: all five Hawaiian islands (Big Island, Honolulu, Kauai, Maui, and Pala) individually banned plastic bags at various points — the last of which took effect in 2015. The bans, which aim to fully phase in by 2020, range in definition and severity, but generally still allow for the use of 100% recyclable plastic bags.

California passed a unilateral, state-wide ban in September of 2014, and it went into effect in November of 2016. The law bans single-use plastic bags at all large retailers, and imposed a 10-cent charge for paper bags. Before the law was passed, more than 100 California local laws banning bags were already in place. 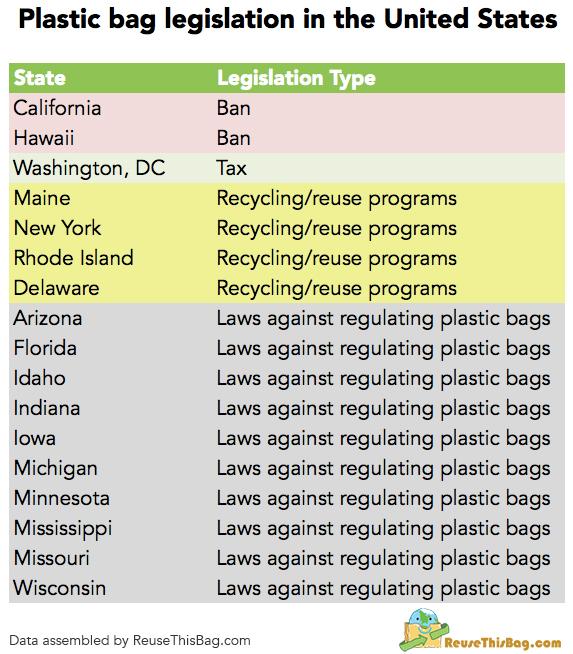 In 2009. Washington, DC imposed a 5-cent tax on all single-use plastic bags after independent studies found them to be the single largest source of pollution in local waterways — and a number of states (New York, Maine, Rhode Island, Delaware) have put partial taxes or bans into place, but haven’t yet made the full leap.

Since the two statewide bans are relatively new, data on outcomes are still largely unfounded,  but we can turn to a few studies run by the more than 200 individual cities and municipalities that have enacted ordinances around the country.

Over 200 counties and municipalities have enacted ordinances either imposing a fee on plastic bags or banning them outright, including all counties in Hawaii.

In San Jose, California, for instance, a ban was put into place in 2012 — and since then, there has been an 89% reduction in plastic bags in storm drains, a 60% reduction in creeks and rivers, and a 59% drop in residential plastic waste. 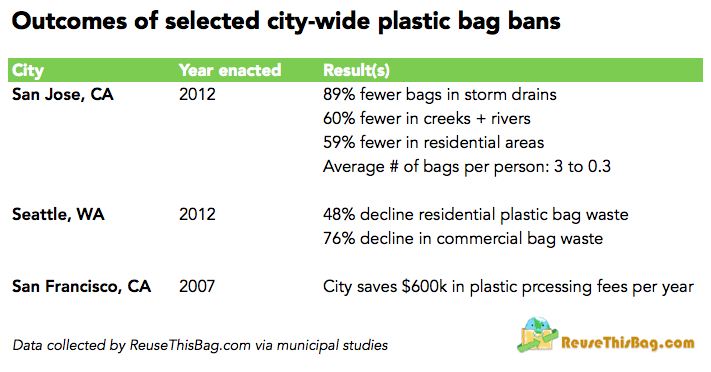 In nearby San Francisco (ban enacted in 2007), the city has saved a reported $600,000 per year in plastic processing fees alone.

Where are plastic bags banned around the world?

America is far from the most progressive country when it comes to plastic bag bans internationally.

At least 32 countries around the world have plastic bag bans in place — and nearly half are in Africa, where plastic bags frequently clog drains, leading to increased mosquito swarms (and, as a result, bouts of malaria). 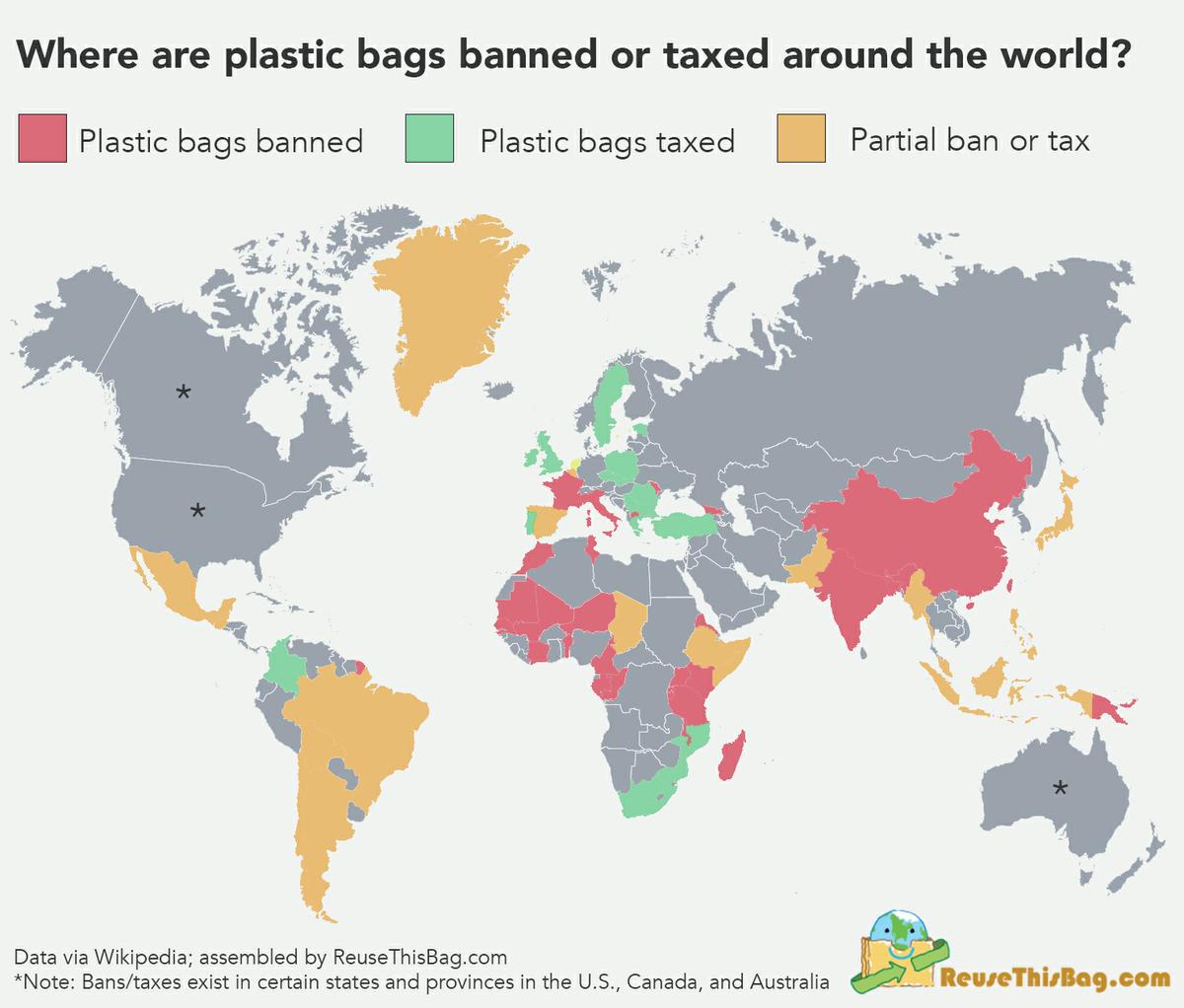 The bans in these countries range widely in severity, but Kenya’s, put into place last year, surely take the cake: anyone “making, selling, of importing” plastic bags could face fines of up to $19,000, and 4 years in jail.

In China, plastic bag waste was so bad that it led to the coining of the term “white pollution.” A full ban was adopted in 2008 — and since then, plastic bag waste has dropped by 60% to 80%, an effective reduction of some 40 billion bags. The country does, however, still face enforcement issues.

And in India, where an estimated 20 cows per die die from plastic ingestion, a ban has been in effect since 2002. 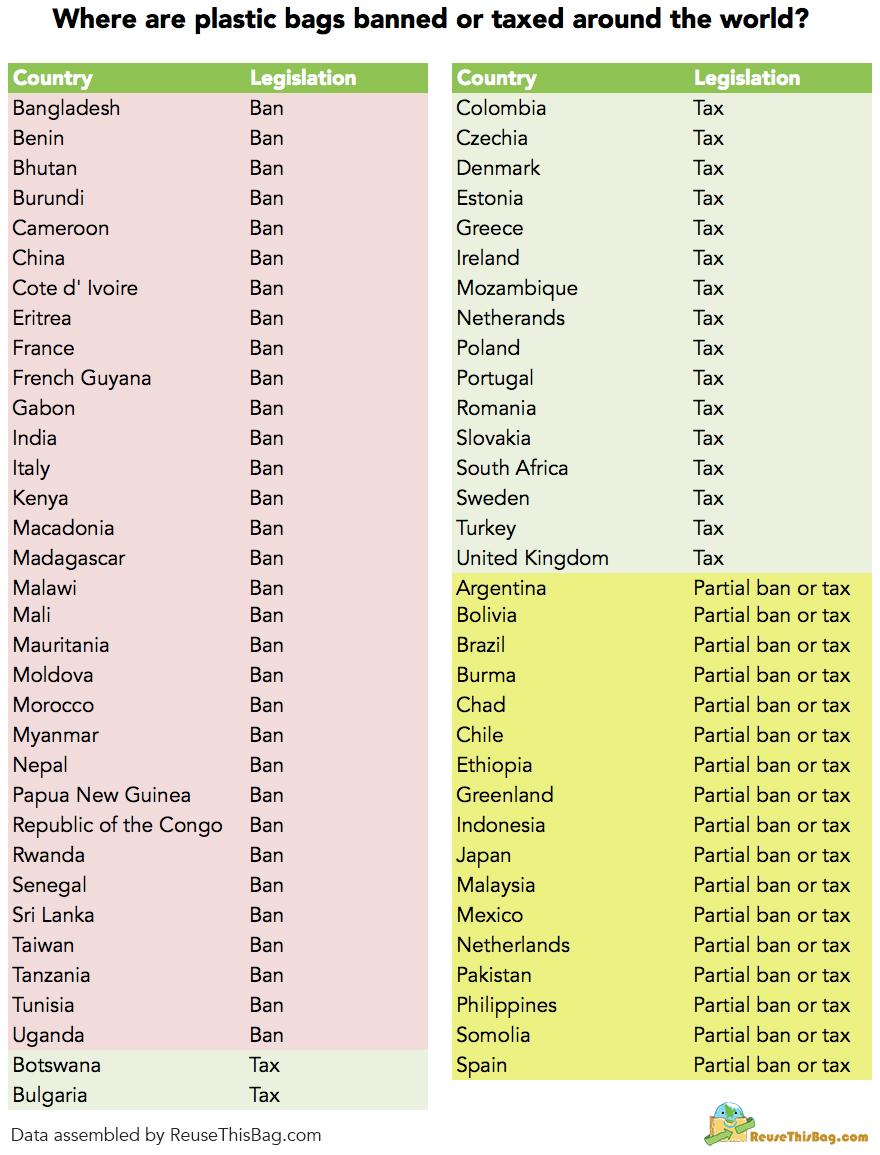 Some 18 countries also have taxes in place, which have proved to be a viable alternative to a full ban.

In Ireland, a 22c plastic bag tax has reduced usage by as much as 90%. Portugal has seen a drop in excess of 85%. And since imposing a tax in 2003, Denmark has seen the lowest plastic usage in Europe. Averaging just 4 bags per person, per year.

Globally, as many as 160,000 plastic bags are used every second — and currently, only 1 to 3% of them are recycled. This simply isn’t sustainable behavior and plastic bag bans are one solution to the problem. While only two states in America and a few dozens countries have banned bags, the results so far have included a substantially decline in plastic bag usage and waste

Note: If you’re a company that wants to work with Priceonomics to turn your data into great stories, learn more about the Priceonomics Data Studio. Cover photo via Flickr user Jedimentat44.