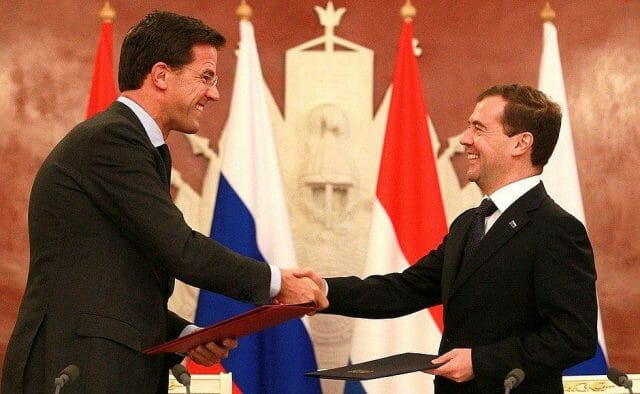 It’s good to be tall. Tall people live longer, are considered more attractive, and make more money – an extra inch of height is correlated with an additional $800 in income. Taller people are more likely to report experiencing happiness and less likely to feel sadness or physical pain.

But it’s not just good for an individual to be tall; it’s good for a society in general.

Countries with tall people are wealthier, have longer average life spans, and are less likely to have experienced conflict. There’s no better sign of a country’s health and wealth than height.

The reason you can judge a country’s well-being by people’s height is that while an individual’s height is largely genetic, the average height of a nation is driven by the environment. If people from every country grew up in similar conditions, then, some researchers estimate, the average difference in height between countries would be within a half inch.

Rather than genetics, diet and well-being during infancy and adolescence are the primary determinants of a country’s average height. During these growth periods, the body has the greatest need for nutrients. Sickness and malnourishment in childhood can mean a loss of three to four inches in height.

Researchers at NCD-RisC – a group associated with the Center for Disease Control – recently released the most detailed dataset on height ever assembled. We used this data to identify the world’s tallest countries and where people grew the fastest – the typical country’s average height went up by more than 3 ½ inches in the last hundred years.

The data shows that while Americans used to be among the tallest in the world, that is no longer true. It also demonstrates that height growth seems to be stagnating across much of the world. Which raises the question: Does this mean that much of the world has reached its full height potential? Or has our health stopped improving?

There is no better example of how prosperity affects height than the great height divergence of North and South Korea over the last 60 years.

In the 1940s, the average person born in either North or South Korea was just about the same height – a little less than 5’ 3”. Today, the average 18-year-old in economically developed South Korea is more than 1.2 inches taller than in the impoverished North. The chart below shows this divergence – it is an average of the heights of men and women. 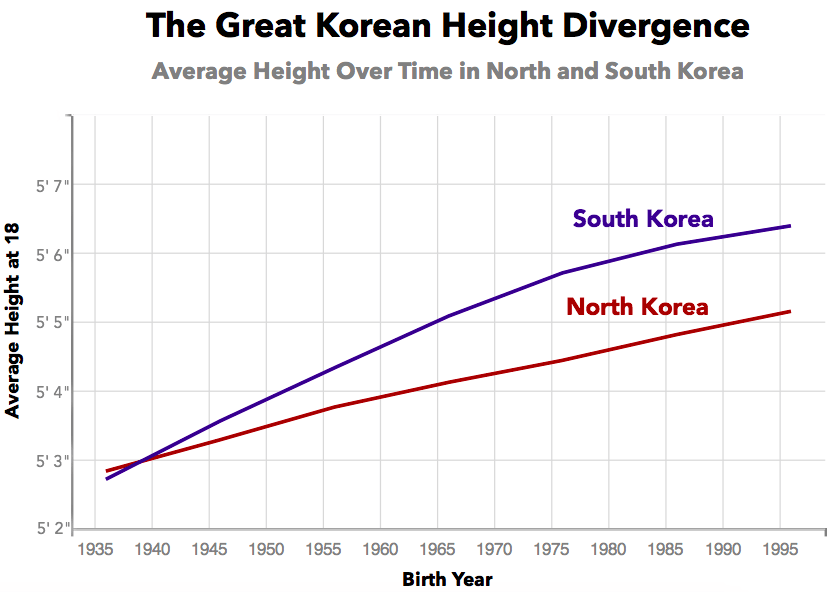 North Koreans and South Koreans share genetic ancestry, so this change in height is almost entirely due to the health and economic conditions of the countries. Neither country has experienced much immigration over the past century.

This height data is from a 2016 report published by NCD-RisC. The report includes average height estimates for 200 different countries from 1896 to 1996. The estimates are of the average individual in the country at 18-years-old. The data is based on a meta-analysis of nearly 1,500 different population studies that included more than 18 million people.

The NCD-RisC researchers make big claims for the importance of studying height as a way to assess human development. They suggest that height data can reflect inequality levels, diet trends, the quality of health services, and the well-being of children in that country.

Other anthropometric researchers go so far as to suggest that height and height growth are a better measure of human development than Gross National Product (GNP). “GNP doesn’t have anything to say about inequality; height does,” economic historian John Komlos told  Scientific American. “GNP has nothing to say about children; height does. So it reaches the part of the population that’s left out of GNP measures.”

The NCD-RisC height data demonstrates the disparities in height around the world. The average person in the Netherlands and Latvia (5’ 9”) is about eight inches taller than in Timor-Leste and Lao (5’ 1”). The following table shows the 50 countries with the tallest and shortest people born in 1996 based on NCD-RisC’s estimates. 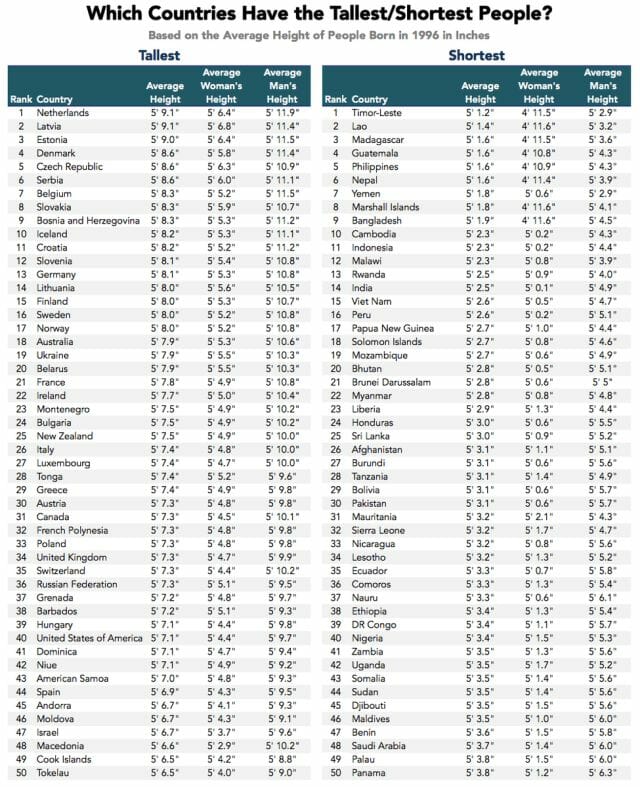 Europe is the land of giants. Besides Australia (ranked 18th), all of the 20 countries with the tallest people are in Europe, and the majority of those are in the northern part of the continent. Some research suggests Northern Europeans have a genetic predisposition to tallness – at least compared to their neighbors to the south – but more important is the widespread prosperity in the region. No area of the world has more high income, low inequality countries.

The Dutch are the tallest people in the world. The average man is nearly 6 feet tall, compared to 5’ 9” ½ in the United States, and the average woman is 5’ 6” ½ compared to 5 4” ½ in the U.S. Dutch businesses and building regulators have noticed. The requirement for door frames and ceilings has been raised to 7’ 6” ½ inches. The Dutch airline KLM increased leg room in response to their countrymen’s increasing height.

The shortest countries are mostly nations located in Asia and Africa. This is primarily because these continents contain most of the world’s poorest countries. Public health researchers estimate that a 6% increase in GDP per capita is associated with 0.4 inches in height growth. Though this relationship is inconsistent – India, for example, has proven an anomaly.

The United States was once among the tallest countries in the world.

According to the data, Americans born in 1896 were the 3rd tallest in the world, and as recently as 1951, Americans were 10th. But the second half of the 20th Century was a period of sharp relative decline for American height. Today, the United States ranks 40th, and the height of the average American (5’ 7”) is no greater today than it was for those born in 1950.

The following chart shows the United States’ relative ranking by year for people born in 1900 through 1990. The other grey lines represent the trajectories of the 199 countries in the dataset. Use the dropdown to see the trajectory of these other countries.

The most likely culprit for this decline is that child health in the United States has worsened compared to other developed countries. One study found that Americans grow less during infancy and late adolescence than their North European counterparts, which points to a comparative weakness in pre- and post-natal care and the diets of American children. The economist and height researcher Richard Steckel suspects that the “crowding out” of fruits and vegetables by American snack foods is an important contributor to this height stagnation.

Immigration is often cited as a reason for the United States fall in the rankings, but empirical research that accounts for the effects of immigration also show Americans’ height stagnating. 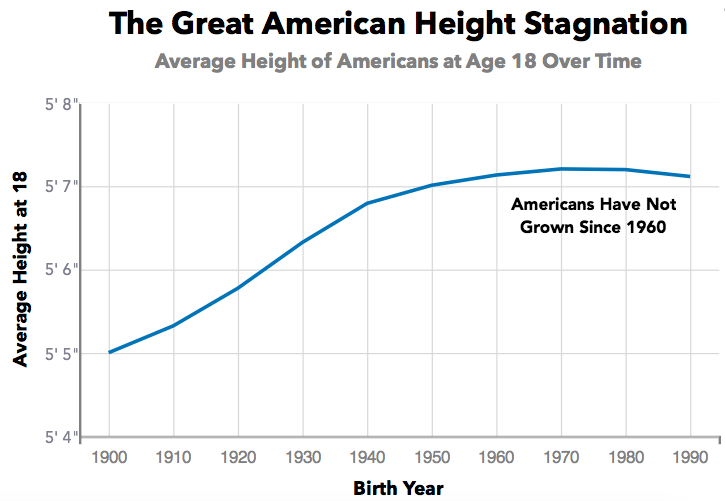 Though Americans have not been growing in the last several decades, they are taller than a century ago. The average American born in 1996 has nearly 2.2 inches in height on those born in 1896. That puts America at 146th out of 200 countries in terms of height gain during the period – not surprising given that Americans were already relatively tall.

The following chart shows the 25 countries that showed the most and least growth. The average country grew by around 3 ½ inches during this period. 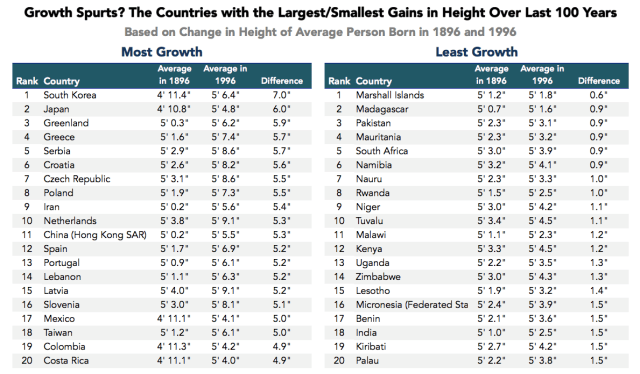 South Koreans are far and away the 20th Century’s greatest height gainers. The average South Korean born in 1996 is seven inches taller than those born in 1896. South Korea is followed by Japan, but after that, the list is marked by its geographic variety. Out of the top 20, six countries are from Asia, eleven from Europe, and three from the Americas. No African country makes the list.

The list of countries showing the least growth – topped by the Marshall Islands at slightly over an ½ inch of growth – is populated primarily by African and Asian countries that have seen slow economic growth. At the turn of the 19th Century, people born in economically stagnant Kenya were nearly three inches taller than their counterparts in South Korea, while today’s post-economic boom South Koreans are two inches taller.

During the 20th Century, countries displayed vastly different height growth patterns. The following chart shows the height trajectories of four countries that all averaged between 5’ 2’ and 5’ 2” ½ in 1900. 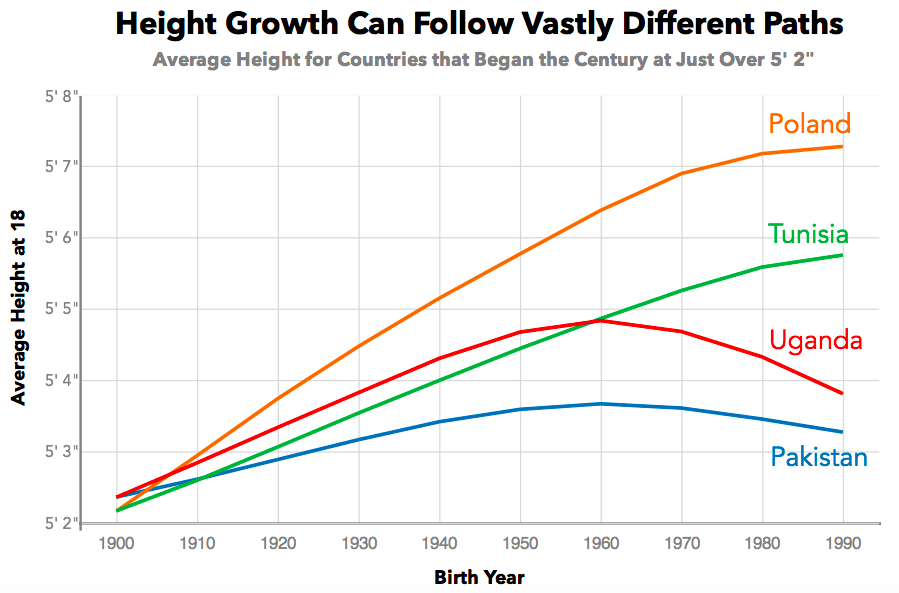 The average Polish and Pakistani person was the same height at the start of the century, but today, Polish people are, on average, 4 inches taller.

Tunisians and Ugandans showed similar growth trajectories through 1960, but since then, Ugandans’ height has dropped precipitously while Tunisians have continued to grow taller. This decrease in height in post-colonial Uganda is likely a result of political and economic instability, which reached its apex in the brutal regime of Idi Amin in the 1970s. Though Tunisia has also faced political issues, GDP growth has generally been steady.

To varying degrees, each of these four countries saw their height growth slow or decline after 1960. This is typical. Across the world, height growth stagnated in the 1970s. 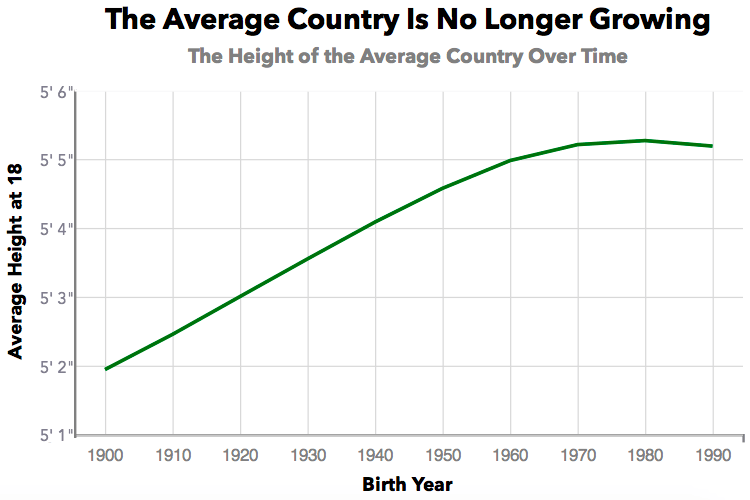 Have we reached peak height?

The anthropologist William Leonard suggests that this plateau is largely a result of the large number of countries approaching their genetic potential – what the science writer Matt Miller calls our “biological asymptote”.

Another theory is that more young people are from poorer families, and therefore shorter, due to decreasing fertility rates among the wealthy. Yet studies have not found that height is increasing among wealthier portions of the American population, throwing that theory into question.

The most likely answer is that with equally distributed economic growth, average height across the world could grow several more inches, but not much more. Anthropometric researchers and anthropologists tend to agree that the Dutch have reached close to the limits of human height.

The height gain of the last hundred years is more precarious than it seems.

Average height has dropped before. Research shows that American men in the late 18th Century were more than an inch taller than they were by the end of the 19th Century. Height also decreased in Western Europe in the 17th and 18th Centuries. Historians primarily attribute this shortening to the effects of major wars and disease that resulted from increased urbanization.

The question of whether conditions in a country are improving is a fraught calculation involving wealth, inequality, the health care system, the environment, and culture.

But there is a shortcut: just look and see whether most parents have to look up at their children.

Our next article investigates why school districts have to pay billions of dollars in fees to financial firms. To get notified when we post it  →  join our email list.