Where Do NFL Fans Live? Mapping Football Fandom Across the U.S.

As the kickoff of the 99th NFL season on September 6th draws nearer, fans across the United States are preparing for another year of football.

Some of course root for the home team. But where exactly are the boundaries of fandom? How close do you need to be to the stadium to root for the team?

There are many ways to cast a vote of NFL allegiance, and wearing a favorite jersey and spending Sunday afternoons in front of the TV are all hallmarks of fanhood. But one clear sign of support than is by making the trip, however far it may be, to see your football team play live.

By analyzing the behavior of NFL shoppers on SeatGeek, we were able to map “NFL Fandom” by county across the United States. See below for the interactive map and some of the most interesting stories that it surfaces. To see which team is most popular in a given county, just click on its location on the map.

Team with the most U.S. counties: Dallas Cowboys

The Dallas Cowboys are the team with the most shopped-for tickets in 392 U.S. counties, making them the clear NFL leader. Much of this fandom is, of course, concentrated in the team’s home state of Texas, but the Cowboys’ influence reaches beyond the Lone Star State. Much of Oklahoma and Arkansas, along with parts of New Mexico and Kansas, makes up Cowboys country. 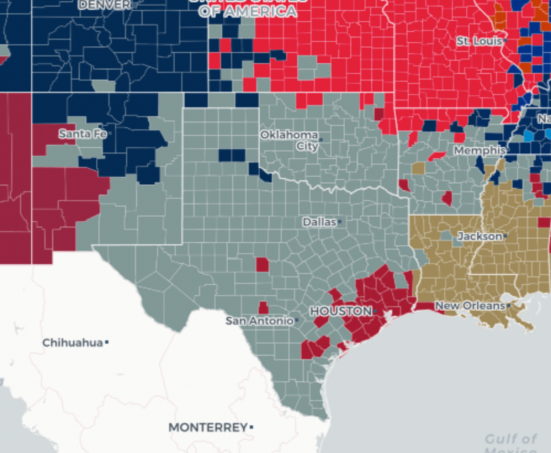 Cowboys fandom in Texas and beyond stretches across 392 total counties. Data source: SeatGeek

Following the Cowboys in the county rankings are the Kansas City Chiefs, the favorite team of NFL ticket shoppers in 319 counties. Like most teams, the Chiefs’ core audience is in the areas surrounding the team’s home stadium in Kansas City, Missouri, but Chiefs fandom extends in all directions: north into Iowa, east into Illinois, south into Arkansas and Oklahoma, and west throughout Kansas and some of Nebraska.

Third on this list are the Minnesota Vikings, the favorite team in 257 counties across Minnesota, the Dakotas, Iowa, and — sacrilegiously — Wisconsin, home of the rival Green Bay Packers.

As the favorite team of ticket shoppers in 149 counties, the Seattle Seahawks fall outside of the top five ranking of teams by number of counties. But these 149 counties account for nearly 800,000 square miles — roughly one-fifth of the county — making the Seahawks the nation’s leading team by land area.

Much of this is due to the Seahawks’ dominance of Alaska, which is the largest state by area and closer to Seattle than any other football city. In the continental United States, the Seahawks cover much of the expansive Pacific Northwest, including Washington, Oregon, Idaho and Montana.

Seahawks fandom in much of the Pacific Northwest, along with Alaska, covers more land mass than any other team. Data source: SeatGeek

Following the Seahawks are the Broncos, with fandom covering almost half a million square miles across Colorado, Nebraska, Wyoming, and Montana. The Cowboys, with large coverage of the country’s second-largest state of Texas, are third at just over 400,000 miles.

Team with the most out-of-state counties: Kansas City Chiefs

Chiefs fandom is ubiquitous in Missouri, which is home to Arrowhead Stadium: the Chiefs are the most popular team in 110 Missouri Counties, nearly the entire state. The Chiefs, however, are the top team in another 199 counties outside of Missouri, spread across eight additional states. Chiefs fans are next-most likely to be found in Kansas (81 counties), followed by Iowa (41), Nebraska (39), and Illinois (23). 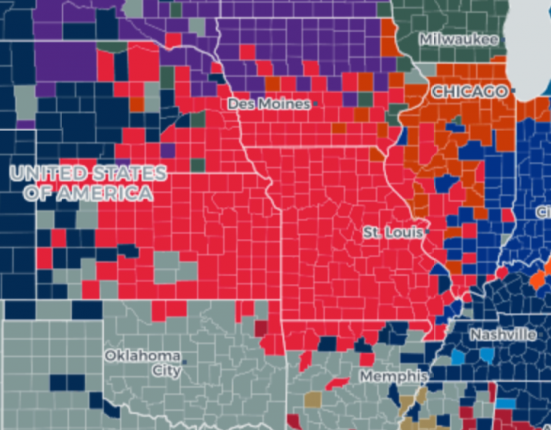 The Chiefs are the top team across most of Missouri, but the team’s fans extend beyond its home state. Data source: SeatGeek

Following the Chiefs are the Dallas Cowboys, whose fans extend beyond the Texas borders; just behind Dallas are the Minnesota Vikings, a team with a large footprint across the northern U.S.

Team with the most California counties: San Francisco 49ers

California — the only state with four NFL teams — can be the site of hot competition for NFL fans. The San Francisco 49ers are currently the most popular team in the state, and also happen to be the most successful of the group on the field, historically speaking. With 41 counties, the 49ers hold a commanding lead. 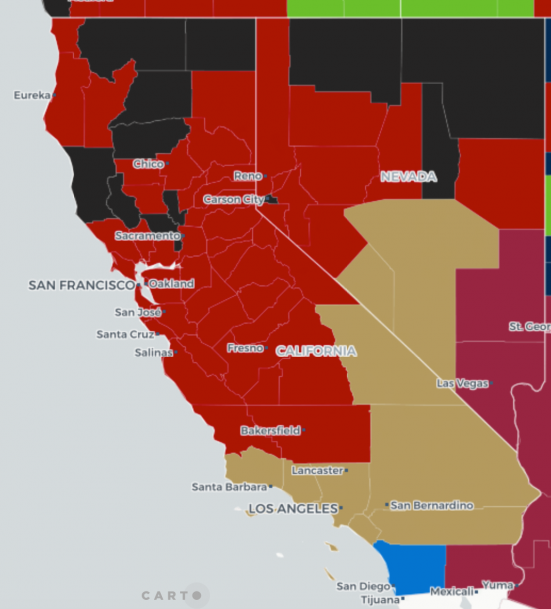 San Francisco’s rivals across the Bay Bridge, the Oakland Raiders, are the top team in the second-most counties, with eight. Raiders fans also make up three large counties in Nevada, the team’s future home state when it moves to Las Vegas in 2019 or 2020.

The state’s two Los Angeles-based teams, the Rams and Chargers, are locked in a battle for Southern California. The Rams currently hold the lead as the top team in seven counties, including LA County, while the Chargers have retained fans in San Diego County despite their move north.

Fandom can be fickle, and when it comes to the most popular sport in the country, NFL allegiance does not always follow state lines. Explore the interactive map above to find out which teams NFL fans in your state and county are supporting