Where Do Women Study STEM? 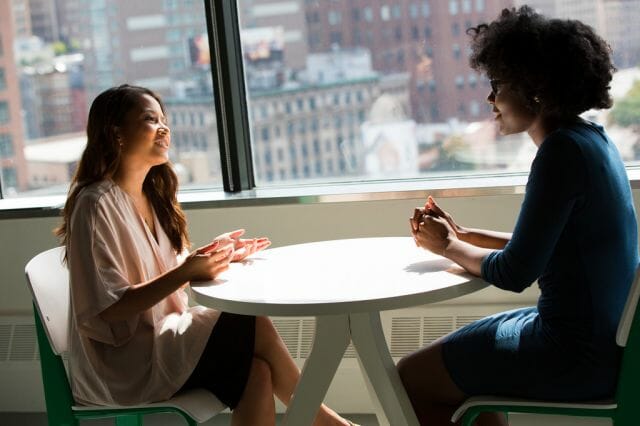 Science, Technology, Engineering and Math (STEM) majors are among the most sought after college graduates. They have an easier time finding a job, and they make more money.

Yet at every major college, a higher percentage of men than women major in STEM fields. It’s a major reason why men earn more money than women, and many colleges and universities have made graduating more women from STEM majors a priority.

Some colleges are doing better than others.

We investigated which schools have the most female STEM graduates and how much being a STEM major benefits those women financially. To do so, we analyzed data on the 100 American colleges and universities with the most undergraduates.

We found that certain schools, including four of the University of California campuses, graduate far more female STEM majors than the average school. On the other hand, at schools like NYU, barely 1 in 25 women graduate with a STEM major.

The data also shows that the U.S. News and World Report’s Top 25 schools vary greatly in their prominence of women in STEM.

Before analyzing the proportion of female STEM majors by school, we wanted to confirm that STEM graduates really do make more money than non-STEM graduates.

We used 2016 Payscale data to look at median earnings (for both starting salary and mid-career salary) by primary college major. For this analysis, we considered a STEM major to be any degree in Computer Science, Engineering, Biology, Chemistry, Physics, Mathematics, Statistics, or Technology. 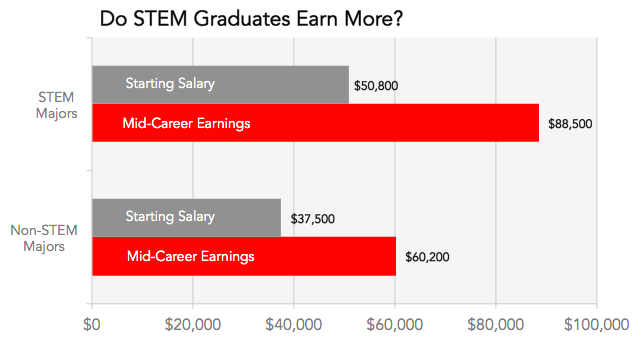 How much more likely are men to graduate with STEM degrees? The following chart shows the percentage of STEM majors by gender at the top 100 schools from 2013 (the most recent year in the data). This data comes from the National Center for Education Statistics.

But we also discovered that the proportion of women in STEM varies tremendously by school. The following table shows the twenty schools—out of the 100 largest colleges—that had the highest proportion of female STEM majors in 2013. 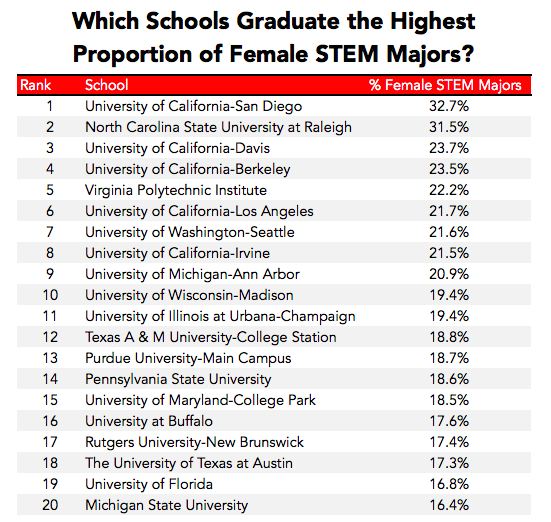 University of California, San Diego tops the list with one in three women graduating with a STEM degree. UC San Diego’s proportion of STEM graduates is three times the national average.

Of the top five schools in the list, three are part of the University of California system. Perhaps the lure of Silicon Valley drives these high rates.

We also identified the schools at which women were particularly unlikely to choose a STEM major. The following table lists the 20 schools with the lowest proportion of female STEM graduates. 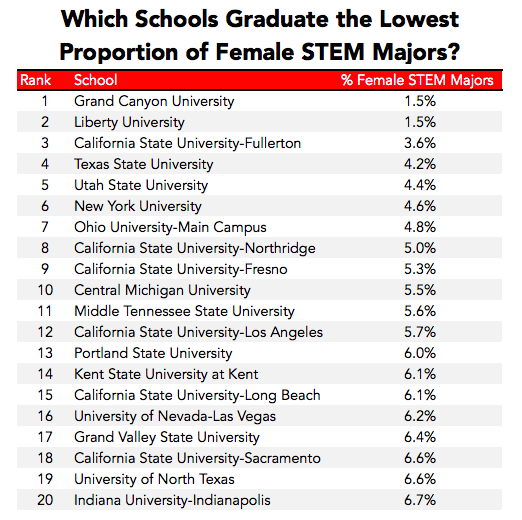 The difference between these schools and those in the top 20 is stark. Only about one in 100 women at Liberty University or Grand Canyon University choose a STEM major. Both schools are primarily made up of online students.

At New York University, only slightly more than one in 25 undergraduate women choose to major in a STEM subject—one of the lowest rates in the country.

The following table shows the number of women in STEM at each of the hundred largest institutions. 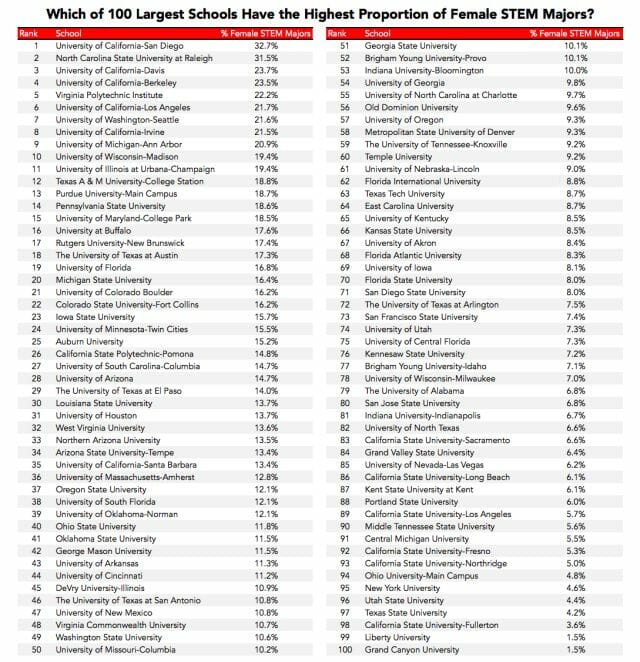 We also examined which of the most elite schools were most likely to have female STEM students. The following table shows the proportion of female STEM majors at the top 25 schools according to U.S. News & World Report. 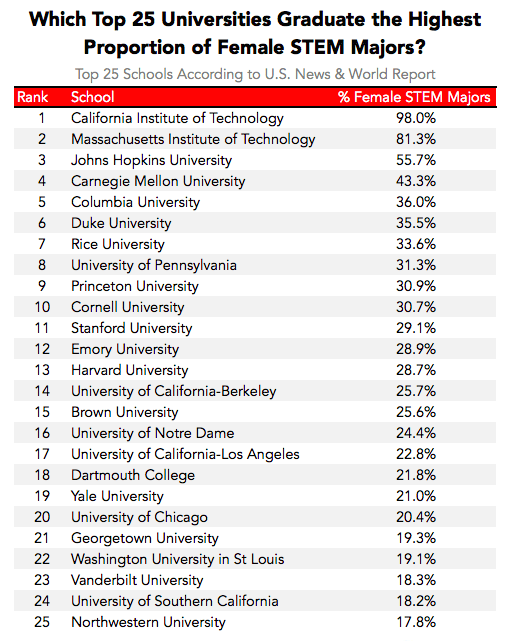 We also looked at which of the top 25 liberal arts colleges had the the highest proportion of women in STEM. The results are in the below table. 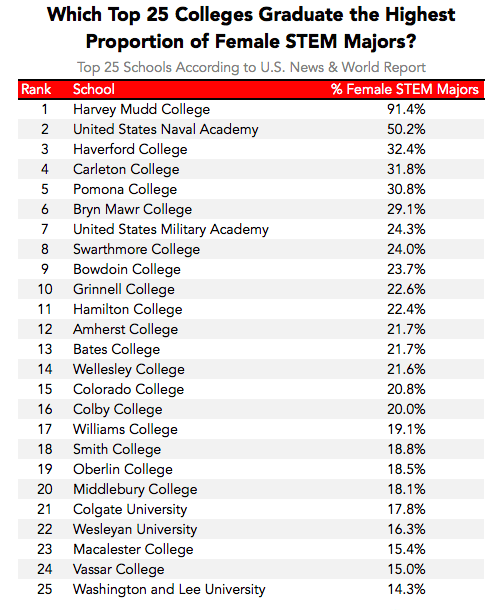 Harvey Mudd, a liberal arts school focusing on math, science and engineering, tops the list. More than nine in ten women who attend the school study a STEM subject. (Its unusual categorization as a liberal arts college is likely because it’s part of the Claremont Colleges.)

After Harvey Mudd and the Naval Academy, Haverford tops the list at 32%. The all-women colleges Wellesley and Smith don’t score particularly high or low by this measure.

We know that the STEM field is majority male, and that STEM graduates make more money than their non-STEM classmates. This led us to wonder if women who graduated from schools with high rates of women in STEM actually had better financial outcomes. 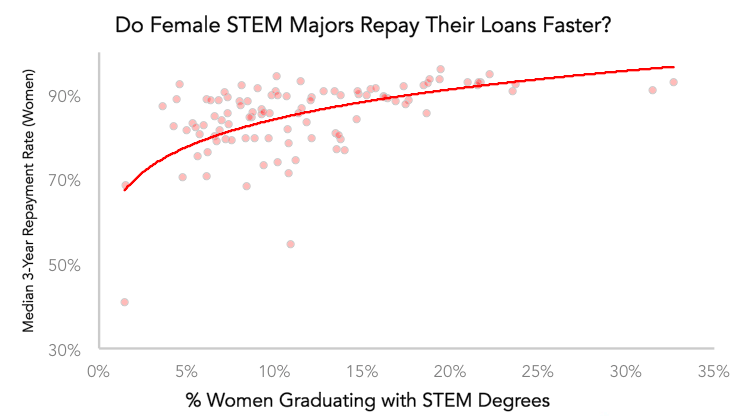 The data points on the right side of the graph are the University of California schools we saw above. They demonstrate that schools with 20% or more of their female students in STEM graduate women who repay their loans within 3 years nearly 90% of the time.

On the other hand, women who graduate from schools on the left side of the graph, which are schools with fewer than one in 20 women in STEM, have lower repayment rates.

Since women with STEM degrees make more money, it makes sense that they have higher repayment rates.

So which college should women interested in STEM attend, and which colleges are graduating women from STEM majors?

To the extent that data can help answer that question, this analysis suggests that there is a lot of variation. Engineering schools obviously graduate many women in STEM, but so do a number of UC colleges, while some large online universities have particularly few women in STEM.

Although the wage gap has slowly fallen, women still make about 78% of what their male peers earn. Since STEM graduates earn hundreds of thousands of dollars more, on average, over their careers, the lack of women in STEM is a major reason why.

Even as Americans consider electing a woman to the presidency, computer science lectures, freshman orientations, and college administrator meetings will remain quiet battlegrounds for gender equality.