Where Home Prices Are Rising the Fastest (Slowest) in America 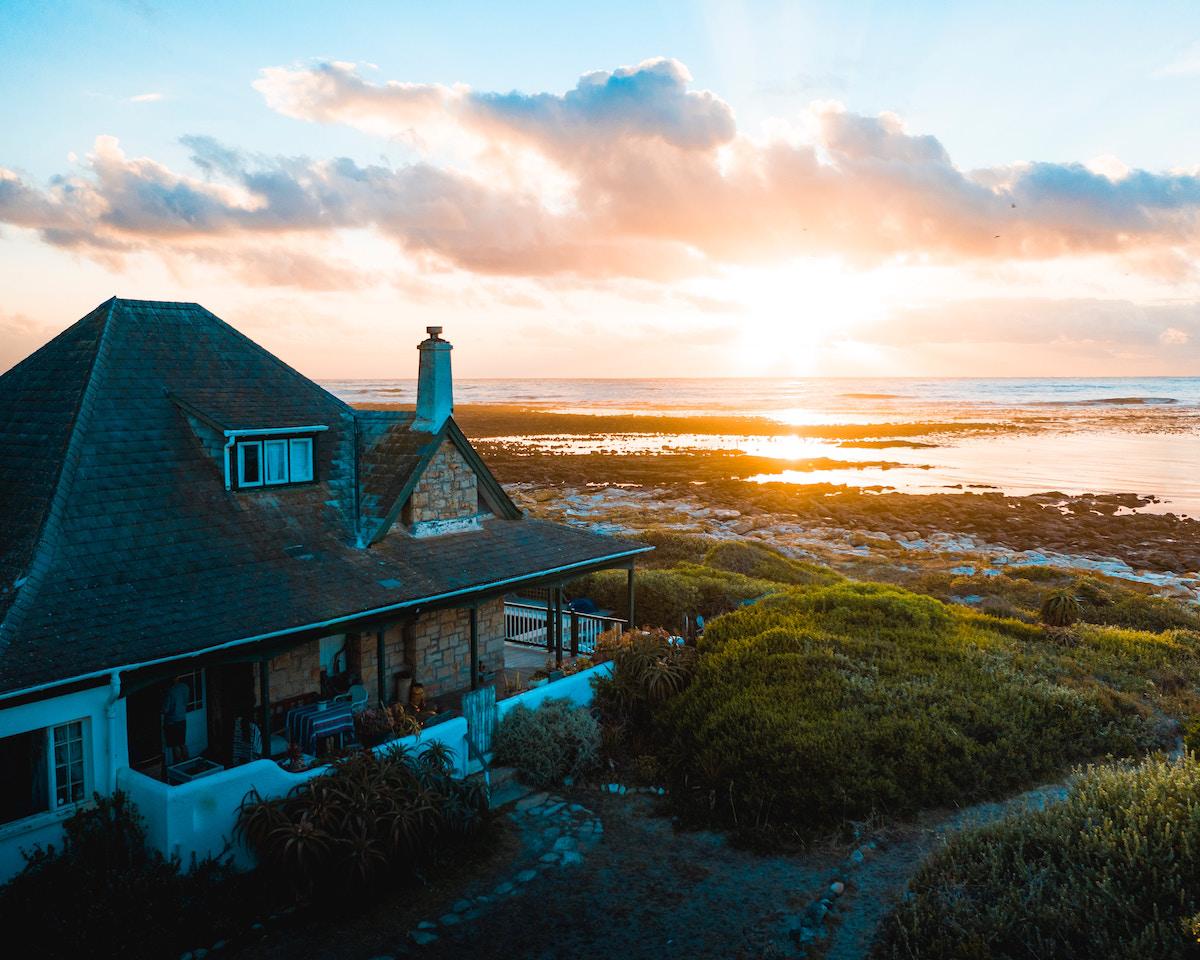 Since the end of the great recession, home prices in America have rebounded substantially. Since the dark days of 2009, prices have steadily climbed and are up over 50% on average from the lowest point.

So where in America are home prices increasing the fastest and the slowest? In light of fluctuating mortgage interest rates, tax reform that’s limited many homeowner deductions, and an affordability crisis in many urban areas, along with Priceonomics customer RefiGuide.org thought we’d dive deeper into the home price data published, aggregated and made available by Zillow.

Lastly, we looked at the expensive markets (where homes cost more than a million dollars) that had the highest price appreciation. St. Helena, CA, Quogue, NY and Stinson Beach, CA all had prices increase over 20% last year.

For this analysis, we looked at data from the beginning of March 2019 compared to prices one year earlier. We looked at Zillow’s seasonally adjusted median price estimate as published by Zillow Research Data.

Nationally, home prices increased 7.2% last year or about $15,000 more than the year before. However, in some states prices spiked much more than that. 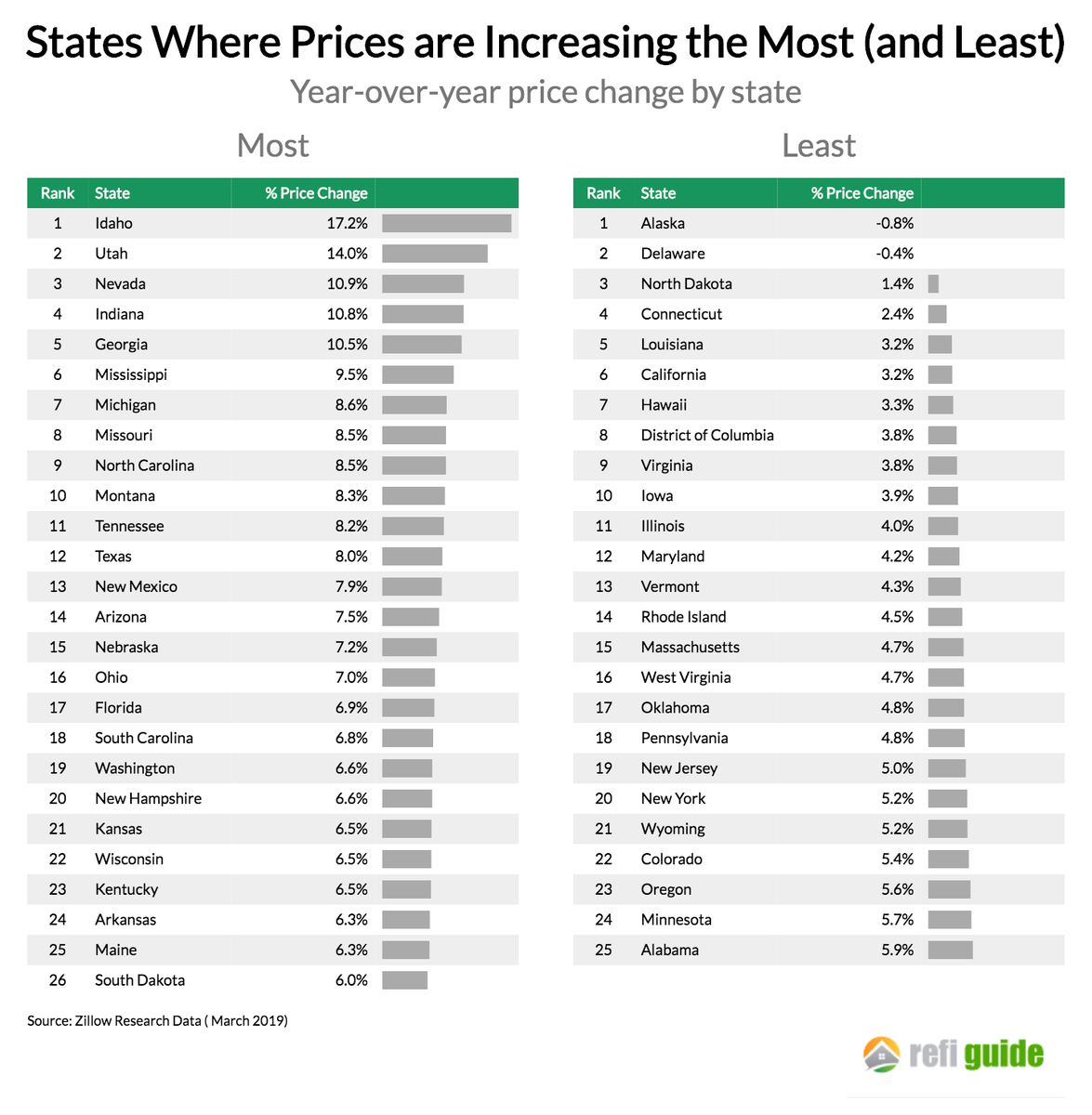 Idaho leads the country with home prices increasing by 17.2% last year, driven by strong demand in the Boise market. In Utah the impact of a thriving economy and growing population is that prices increased 14% in just one year. Nevada, likewise is seeing strong home price growth as people migrate from California and the state’s low taxes are more favorable under the most recent tax reform. Alaska and Delaware have the distinction of being the only states where home prices fell over the last year.

Next, we looked at home prices in the top one hundred largest housing markets, as measured by population. Which cities were experiencing rapid home equity appreciation and which ones are not? 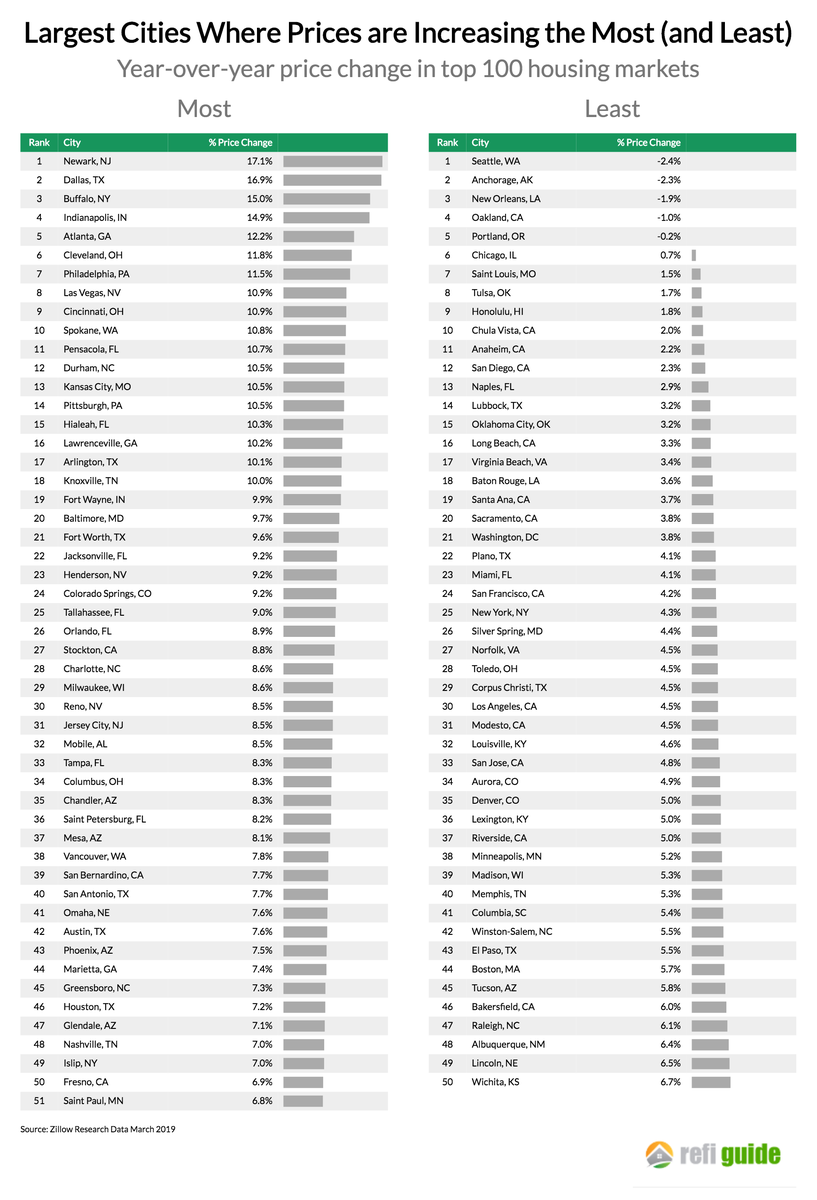 Notably, some of the most expensive and desirable cities like Seattle, Oakland and Portland have seen their prices decrease in the last year. Each of these locations has experienced price appreciation during this decade, however.

Were there any smaller cities and towns that experienced home prices rising faster than the big cities? Below shows the fifty places in the United States where home prices increased the most this last year: 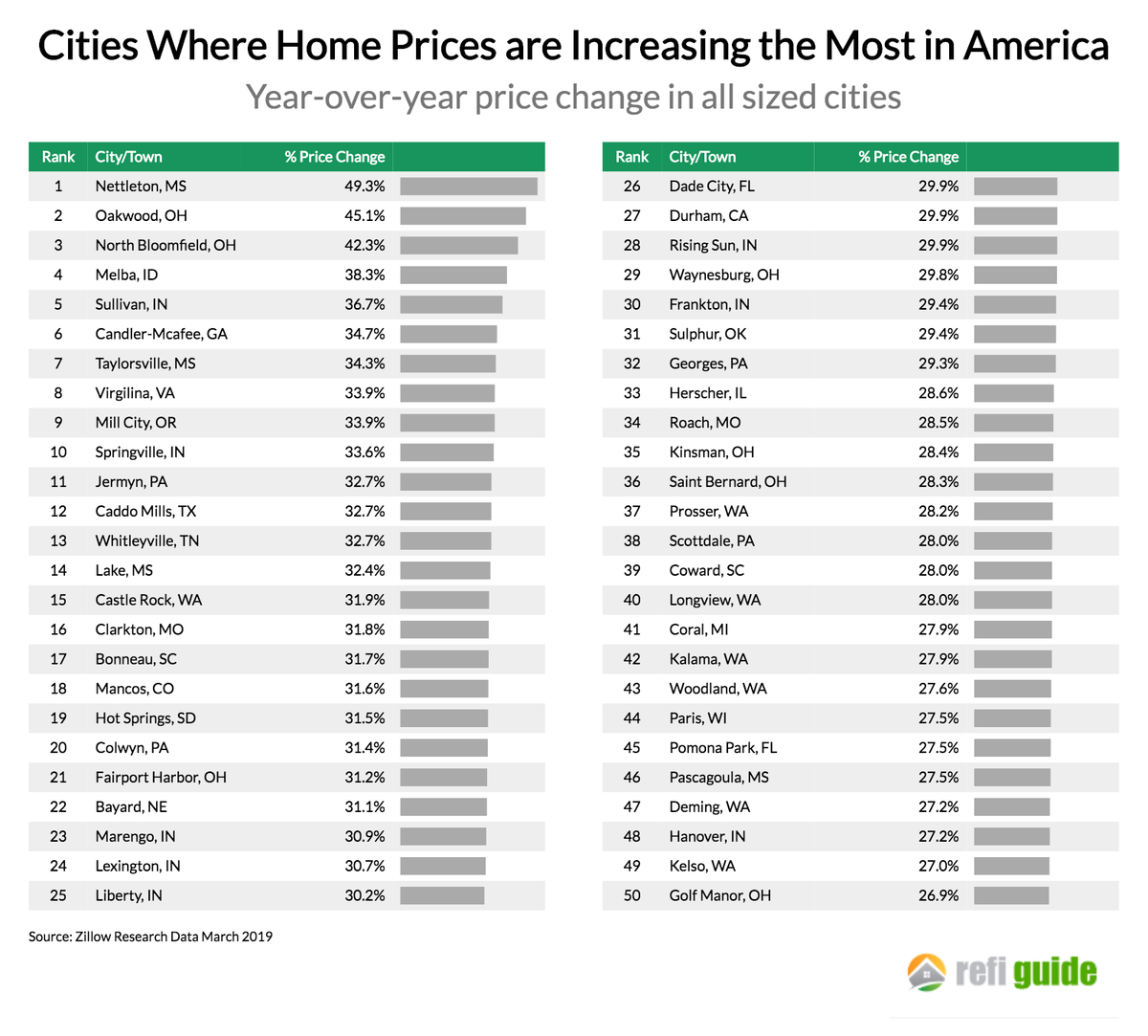 Across the Midwest and South, numerous smaller cities experienced price appreciation much greater than 25% last year. In Nettleton, MS prices increased 49% in just one year! Notably, almost none of these high-price growth cities are located on the coasts.

Lastly, what are expensive places to buy a home in America that are just getting more expensive? To conclude we looked at locations where the median home price was over one million dollars and the prices keep rising: 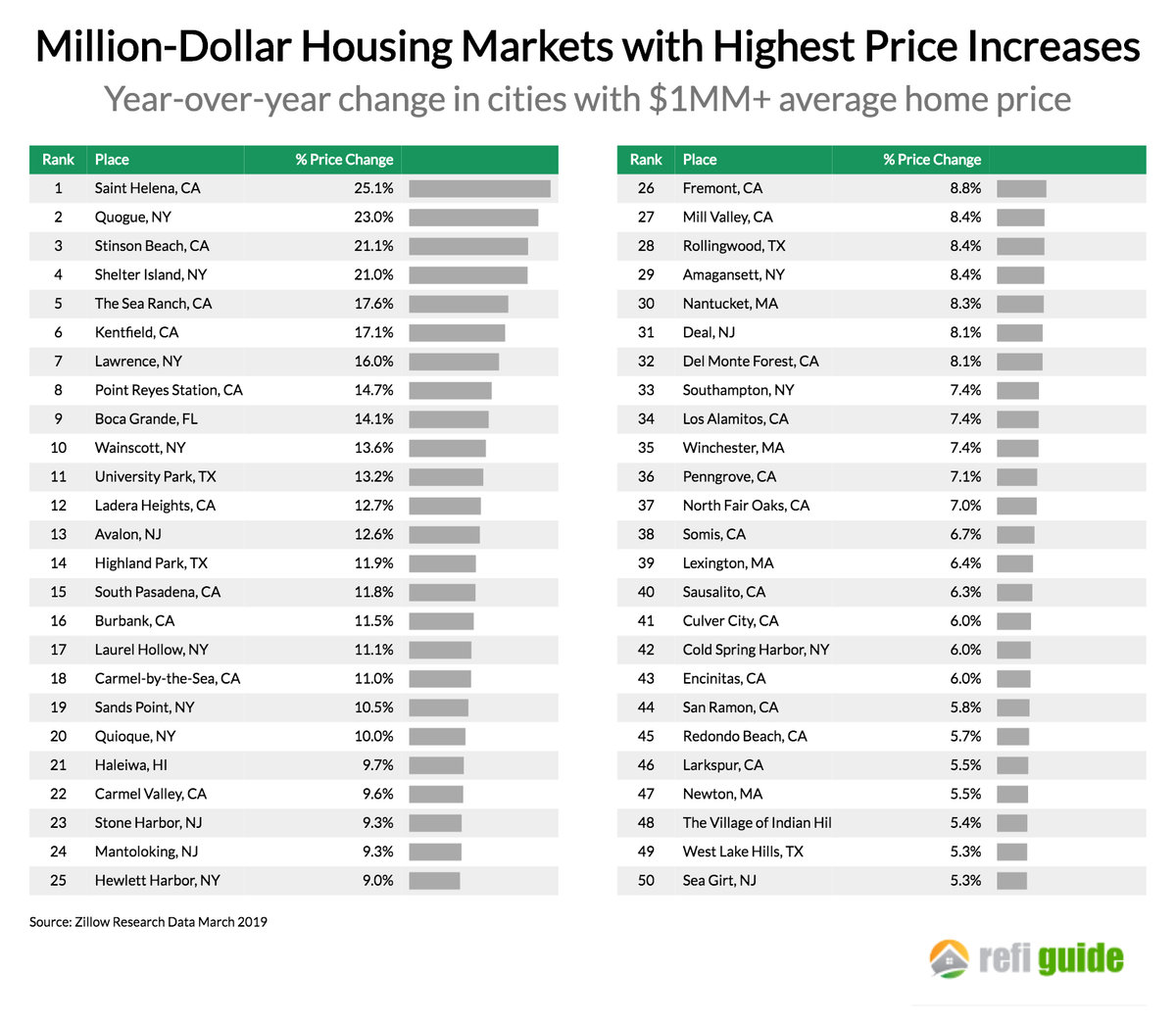 In this rarefied group, prices increased the most in Saint Helena, CA. In this tony town in Napa Valley, prices increased over 25% last year. In second place was Quogue, NY a town in the Hamptons. In fact, 9 out of the top 10 expensive cities with high price appreciation are in California or New York. More specifically, many of these locations are in the vicinity of San Francisco and New York City, the two very large economic engines that are driving home prices.

After nearly a decade of vibrant stock market and real estate returns, this year home prices have continued to climb at a steady clip. In only two states in America did prices actually fall, and in five states prices grew more than 10% in a year. As the economy has continued roaring, places that were once known for being affordable like Idaho, Utah, and Nevada have seen home prices spike. While expensive cities like Seattle, Portland and Oakland have seen prices level off in the last year, and places like Newark, Dallas and Buffalo have become less affordable. In this stage of American economic expansion, the once affordable places are seeing their prices escalate.