Where in America Are the Most Online Fraudsters? 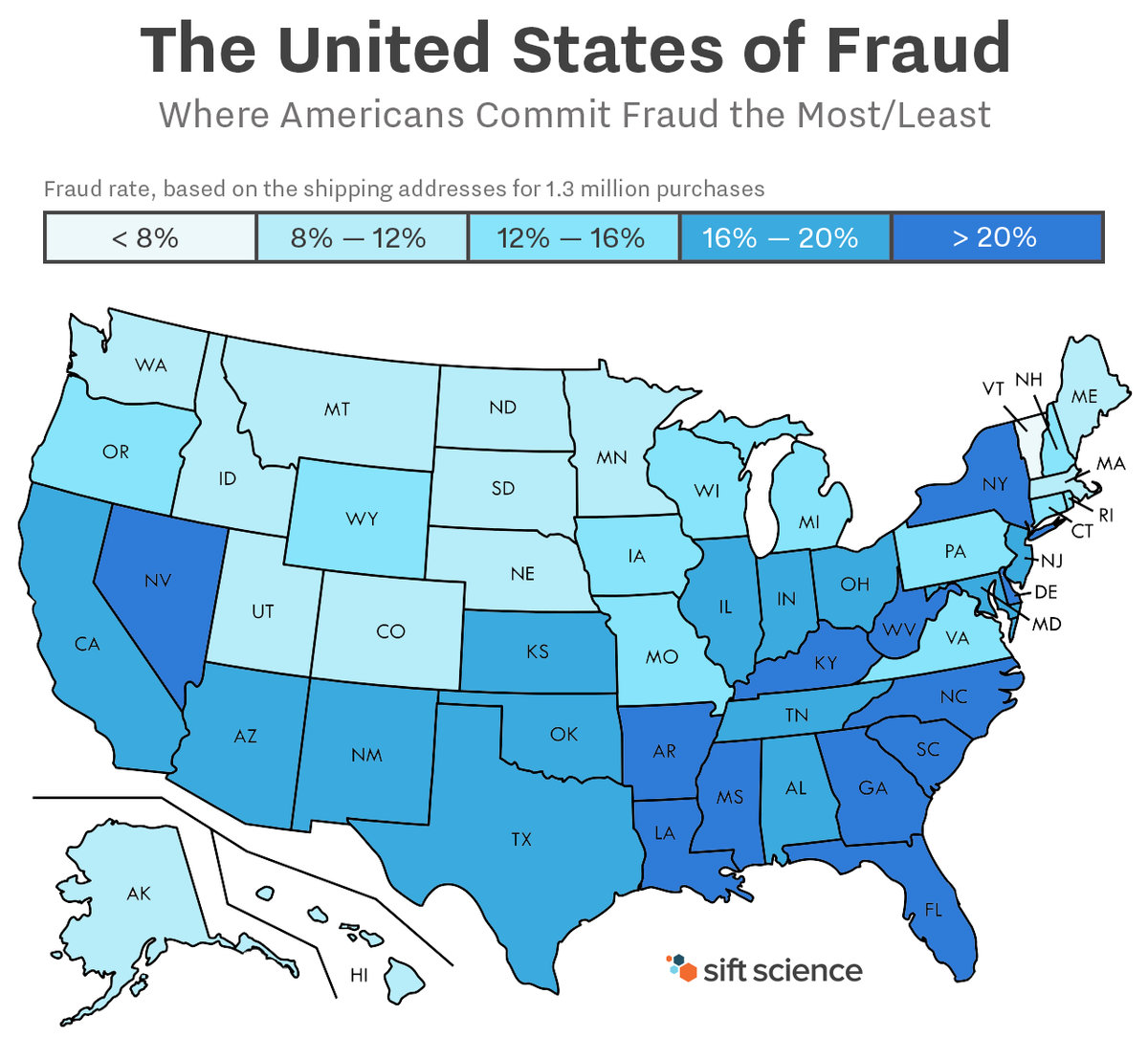 Over the course of several years, they created more than 7,000 false identities, obtained tens of thousands of credit cards, and formed an elaborate network of shipping addresses, where illegally purchased goods were delivered. By the time they were caught, their crimes had cost individuals and businesses more than $200 million.

This was an exceptional case. But fraud, on a smaller scale, has a tremendous impact on American consumers: In 2012 alone, some 12.7 million people lost an estimated $3.5 billion to similar schemes.

Where do Americans get defrauded the most?

To find instances of fraud, we analyzed hundreds of thousands of online transactions over the course of a year (August 2015 – August 2016) that took place across more than 6,000 websites and apps that use Sift Science. Each of these transactions contains two key pieces of information:

First, we used billing address data to map which U.S. states are home to the most victims of fraud.

In the map and chart below, the figures represent the total percentage of all transactions that were suspected cases of fraud. 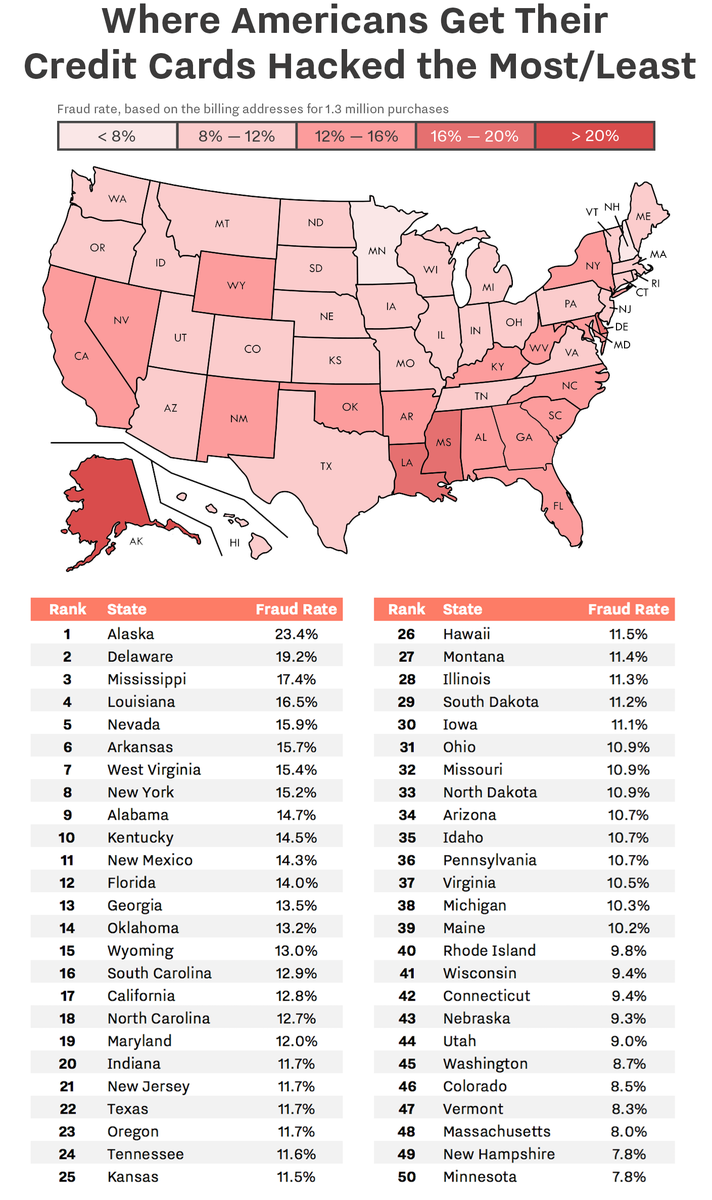 Alaska tops the list with 23.4% of all transactions flagged as fraudulent.

This is at least partially due to Alaska’s relatively lax laws on criminal fraud prosecution. Under Alaskan law, any charges under $750 on a stolen credit card (which, according to the Alaska Police Department, amount to 300-400 cases per month) are not constituted as “theft.” Recently, the state has considered raising this theft threshold to $2,000.

Aside from Alaska, the entire South has higher rates of fraud: Mississippi, Louisiana, and Alabama all crack the top ten.

But state-level data doesn’t tell the whole story. We went through data for more than 1,200 cities, and filtered out those with a sample size of less than 10,000 transactions. Some of the “cities” listed are actually areas and neighborhoods that were used in the “city” field for an address.

The Bronx, New York—the borough of New York City with over 1.4 million people—has an unusually high fraud rate of over 21.5%. It is the only major city/place with a fraud rate of greater than 20% of all transactions. Fellow New York boroughs Brooklyn and Manhattan rank third and tenth respectively. The Big Apple is full of people getting defrauded.

Do some of these percentages look incredibly high? We thought so, too. But one thing to keep in mind is how fraudsters work. We’ve seen networks of fraudsters (fraud rings) cluster in small geographical areas. We’ve also seen single fraudsters attack multiple sites – multiple times – using the same stolen credit card information. In other words, a small number of fraudsters could be responsible for a large, concentrated volume of bad transactions. That’s why pooling data from across a large and diverse network is key to successfully stopping fraud.

Returning to our list, you can see that a slew of Florida cities (Miami, Orlando, Jacksonville, and Tampa) also make the top ten.

Conversely, just outside of New York City, few people are defrauded. New York suburbs Westbury and Hempstead are numbers one and two in terms of cities with the least fraudulent billing transactions.

Where do fraudsters come from?

Next, we’ll turn to our shipping address data to see where all of these fraudsters live. 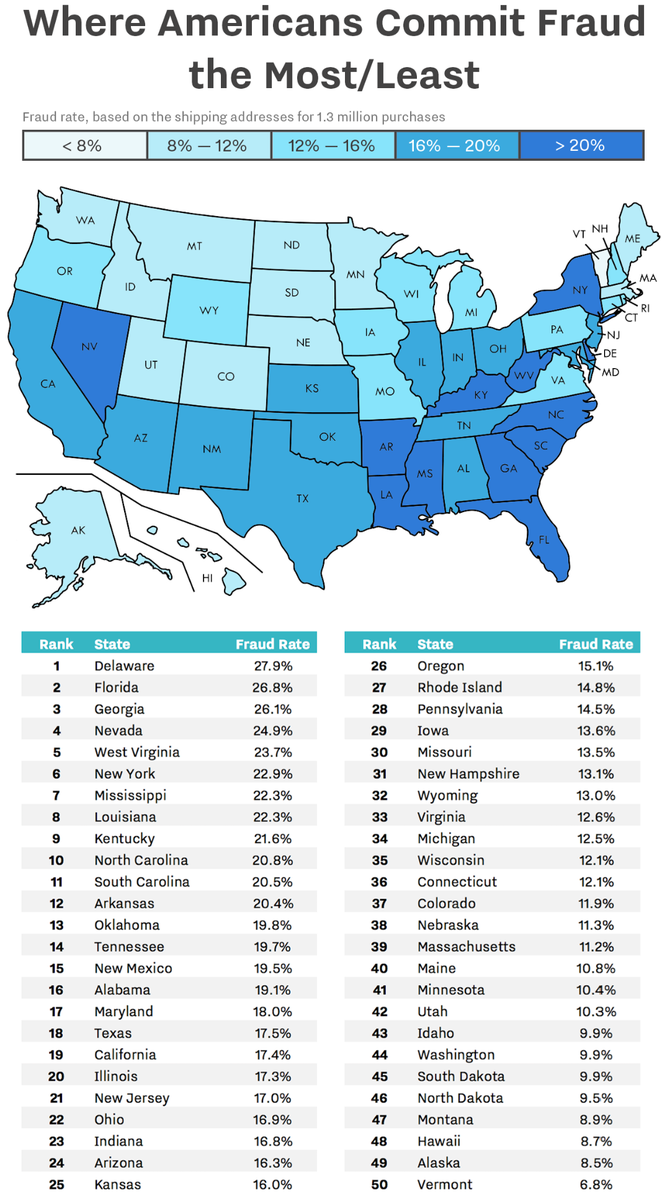 There are several notable outliers: Delaware—a tax haven where over one million businesses are registered—ranks first. Nevada, home to the country’s largest gambling circuit, ranks fourth.

As for cities, the Bronx ranks above the rest.

New York, in general, seems to be a prime place for fraudsters to mail themselves stolen purchases: The Bronx and Brooklyn both make the top three, and several smaller locations in New York City—like Middle Village, Jamaica and Flushing—would rank highly if we did not filter out locations with under 5,000 instances of fraud.

Fraud is an amalgamation of millions of crimes, and fighting it is not a single battle but a process. Remember, billing and shipping addresses are just two pieces of data among a sea of fraud signals – so don’t start blocking all orders from the Bronx!

Still, it helps to know what patterns to look for. This analysis shines a spotlight on New York City, Florida, and Delaware. That’s where we see the most fraud happening.

Our next article explores how two statisticians solved a 150-year-old mystery about Alexander Hamilton. To get notified when we post it  →  join our email list.

Can't make it to San Francisco? There's also a remote streaming option. Get your ticket here.