Where is Pizza Most Expensive (and Cheapest) in America? 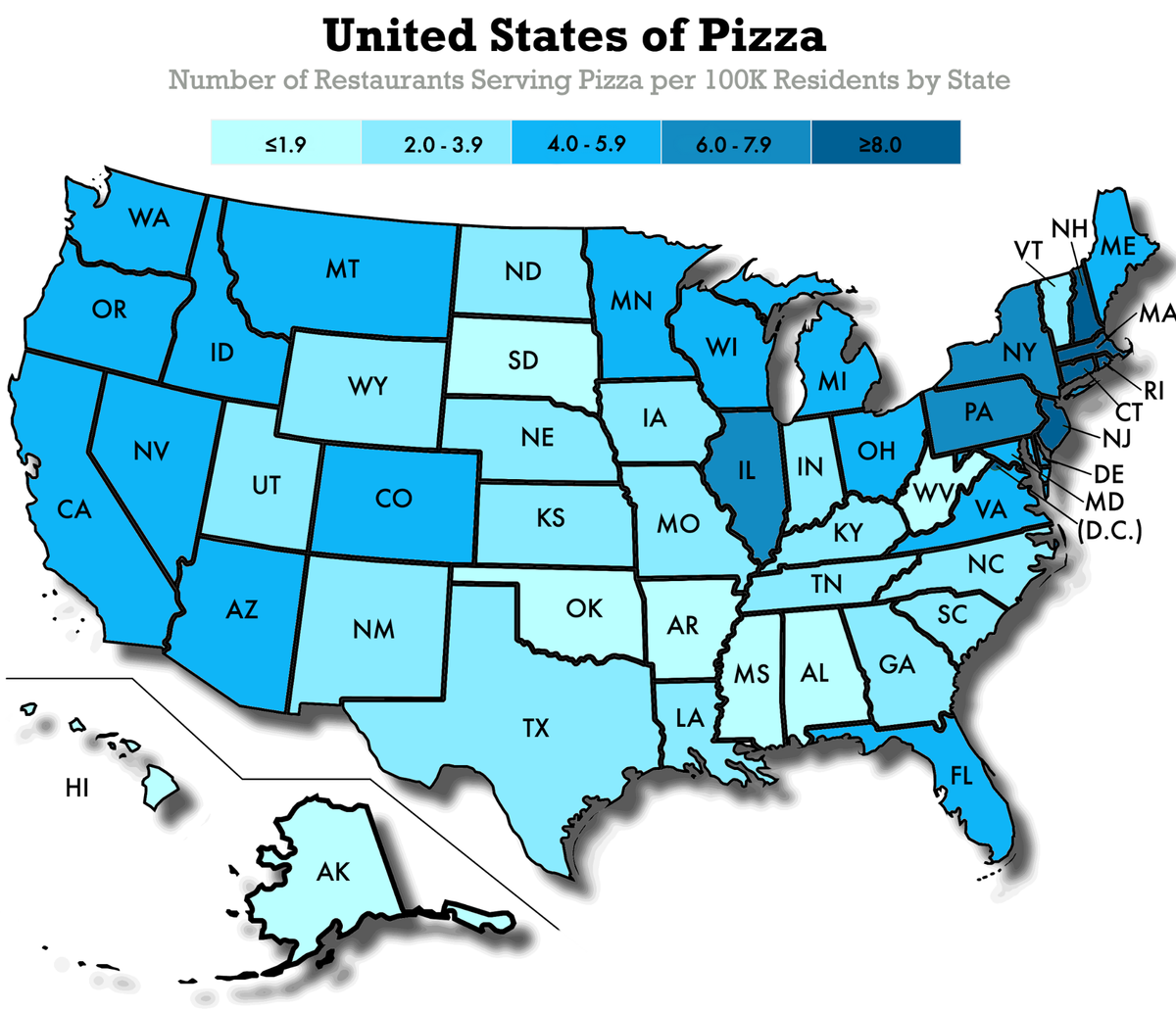 Between 2007 - 2010, a USDA study estimated that 1 in 8 Americans ate some form of pizza on any given day. That number climbs to about 1 in 4 for males and 1 in 5 for females when looking specifically at Americans age 12 to 19. There’s no escaping it; pizza is engrained in our diets.

Pizza is not only a pillar of the American diet, but also of our culture.

Through saturation of TV, movies, and now the internet, it has entered the zeitgeist. How do you make characters as strange as the Teenage Mutant Ninja Turtles more relatable? Make them love pizza. Right now, you can search on Amazon to find pizza sweatshirts, pizza pool toys, and pizza cologne. Even new disruptive and trendy technological innovations need their connection to pizza. That’s why there’s a pizza cryptocurrency and drone pizza delivery.

We noticed that pizza prices and availability can vary dramatically across the United States. We analyzed data from Priceonomics customer, Datafiniti, a data company that has digitized menus across America. Which states and cities have the most pizzerias? How much can you expect to pay for pizza across the country?

Starting with this business data, we searched for restaurants serving pizza. This data set gave us thousands of different listings to comb through for more detailed location and menu information. To control for differences in price because of toppings and sizes, we needed a standardized item for evaluation, so we found the price of a large plain pizza in each restaurant record. This baseline allowed us to compare prices across cities and states more accurately.

So, where can you find the most places serving pizza? Accounting for population, you can find the most pizza places concentrated in the Northeast, particularly Connecticut, Massachusetts, Rhode Island, and New Jersey. At the city level, the trend is not as clear, with Orlando, FL, Buffalo, NY, and Minneapolis, MN taking the top three spots.

How much will you pay for a large cheese pie? Median prices range from $7.25 to as much as $15. Despite only looking at plain cheese pizza, there are subtle stylistic differences that likely lead to price variation. The neighborhood family-friendly pizza place and the typical franchise have much lower prices than artisanal wood-fire pizzerias. Other regional differences, like Chicago deep dish, lead to higher prices as well.

And the cities with the most expensive cheese pizzas in America? Buffalo, NY, Nashville, TN, and San Francisco, CA take the top three spots.

Despite those geographical differences, there is one universal truth: no matter where you are, you’ll be able to find pizza.

To start our investigation, we will want to see how pizza places are distributed across the country. To account for differences in population, our metric of interest will not be absolute number of restaurants, but instead number of restaurants per 100K residents. Controlling for populations makes sure some states, like California, do not dominate the top of our charts.

The state with the most restaurants serving pizza is Connecticut, with 13.2 restaurants per capita. Smaller northeastern states with large Italian populations dominate the list, including Massachusetts (11.7), Rhode Island (11.6), and New Jersey (9.6).

New York and Illinois, two states that are known for their distinct styles of pizza, are in the second tier of states, along with areas of West, the upper Midwest, and Florida.

States in the Deep South have the fewest number of pizza places per capita. We expect this result as these states don’t have distinctive pizza styles. Hawaii, despite having an eponymous pizza (the Hawaiian, which features pineapple and ham), is also in this group.

So looking at these states, what is the cost of the average large plain cheese pie? 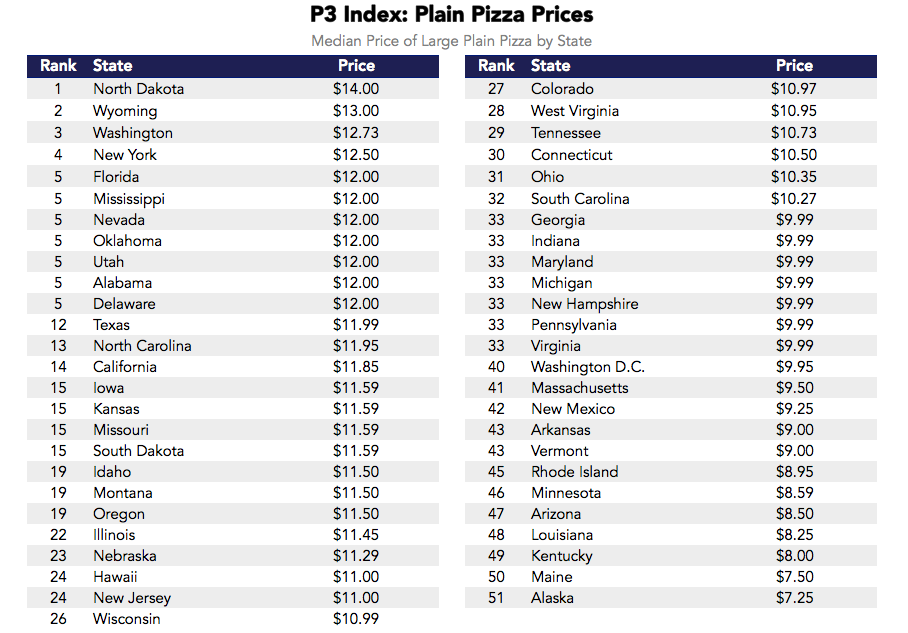 North Dakota and Wyoming have the most highest median prices. While there is no distinct regional trend, there are some possible explanations for what we see. These states have fewer pizzerias, which tend to be more upscale, artisanal sit-down restaurants. So in cases where you can find pizza, it’s just a more expensive variety. Maine and Alaska have the cheapest pizza options. While that’s not exactly the attribute you want your pizza to be known for, it is a great thing for pizza lovers in these states.

Now we will go one level deeper and take a look at America’s cities. Where can we find the most pizza restaurants per capita? When working with this data, we limited our comparison to the 50 cities with the greatest absolute number of pizza places. 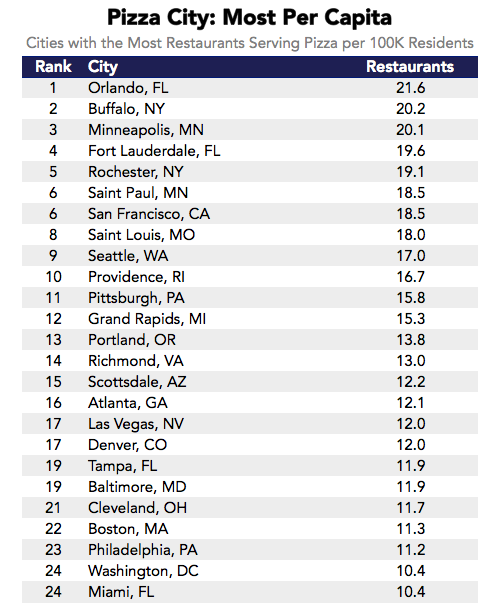 Orlando, FL sits at the top of our list with 21.6 restaurants per 100K residents. While Orlando is not known for any pizza tradition, a few things could be causing the abundance of pizza. Florida, in general, is known for tourism, Orlando especially. Pizza is guaranteed to interest tourists no matter where they’re from and it’s a great option for families when traveling. Ft. Lauderdale likely has a similar story.

Number two is a city from New York that is not NYC; it’s Buffalo (20.2). This mid-sized city has a sizable Italian community and its own style of pizza. It’s a medium-thick crust round pie that is somewhere between New York and Chicago pizza styles.

Our third place city, Minneapolis (21.1), may seem like the odd-man-out at first, but the Midwest also has its own distinct pie. Its square shape and medium-thick crust is similar to the traditional Neapolitan pie that families would bake at home. You’re likely to see this shape of pizza across the Rust Belt, as far east as Detroit.

Now that we know where to find pizza, we should learn more about prices. Again we will look at the median price of a large plain pizza to compare our cities.

The city with the highest median price is Buffalo, NY at $14.79 for a large plain pie. In general, large metropolitan areas or mid-sized eastern cities compose the most expensive cities for pizza. Most likely their prices are just a product of the higher cost of living.

At $5.99, Lexington, KY has the least expensive median price. Overall these cities are smaller and more often in the center of the country. Two of the cities with the most pizzerias, Orlando and Minneapolis, are also on our list for least expensive plain pies. That’s great news if you are a pizza lover in either of these cities. While we would need much more data to verify this idea, it could be possible that the high number of restaurants leads to greater competition and therefore better prices for customers.