Which Cleaning Products Pollute Your Home the Most? 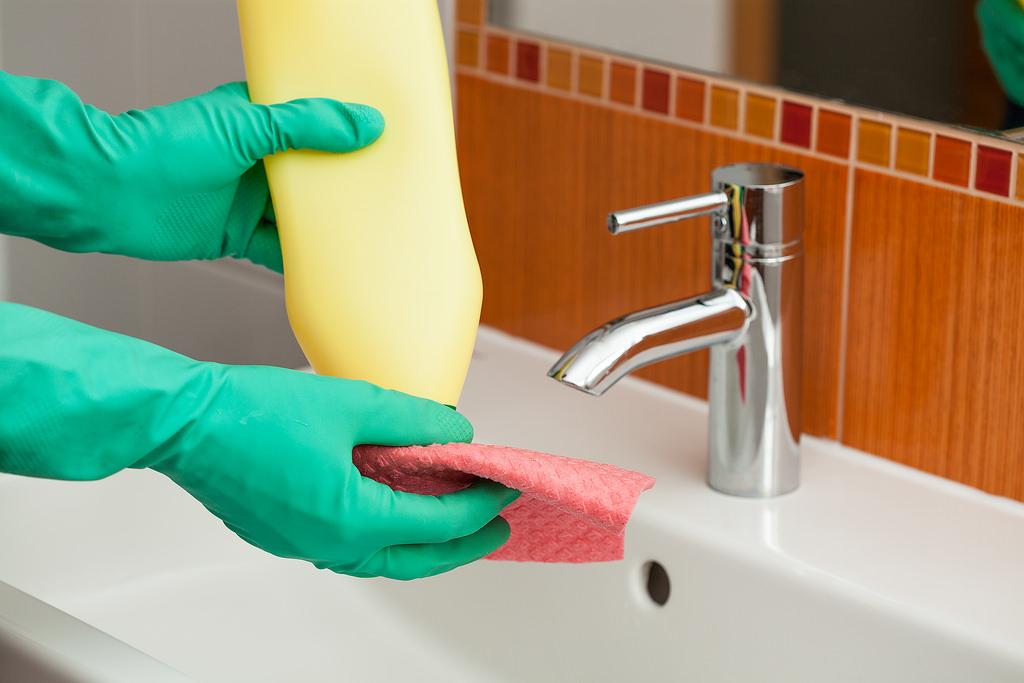 When you use a household cleaning product, to what extent are you releasing pollutants into your home?

Many common cleaning products rely on petroleum-based manufacturing and release toxic compounds into your home. The EPA broadly classifies these chemicals as volatile organic compounds (VOCs), which includes airborne emissions like formaldehyde and car exhaust, as well as consumable compounds like ethanol and acetic acid.

Even in small quantities, VOCs are dangerous to inhale. Over time, these chemicals can build up and cause headaches and nausea, as well as eye, nose, and throat irritation. Certain VOCs have been linked to the development of allergies and asthma, and even complicated medical manifestations like sick building syndrome.

We analyzed this data along with Priceonomics customer, Ode, a company that creates environmentally-conscious cleaning products. As part of their product development process, Ode tested the VOCs released by common brands of air fresheners, cleaning sprays, wipes and soaps.

The product that expelled the most harmful compounds per use is Wet Ones wipes, followed by Mrs. Meyer’s air freshener spray. Over a year of use, Wet Ones would release the most VOCs into your home: nearly half a kilogram (464,000 milligrams). Emissions from air freshener plug-ins add up over time (with hourly puffs of scent) to up to 100,000 milligrams per year.

For this study, we focused on volatile organic compounds (VOCs), a variety of chemicals emitted as gases from certain solids or liquids. Volatile organic compounds are often used as ingredients in fuels, paints and varnishes, as well as thousands of cleaning, disinfecting and cosmetic products. Formaldehyde is one of the most common VOCs. You may know it as a common embalming chemical used to preserve dead bodies.

Levels of VOCs have been found to be two to five times higher indoors (where these products are used and stored) than outdoors. Exposure to these chemicals can result in short- and long-term health effects, including eye, nose and throat irritation, headaches, nausea, skin reactions, and even damage to the liver, kidneys or central nervous system.

First, we measured the average amount of VOCs released in each product category. 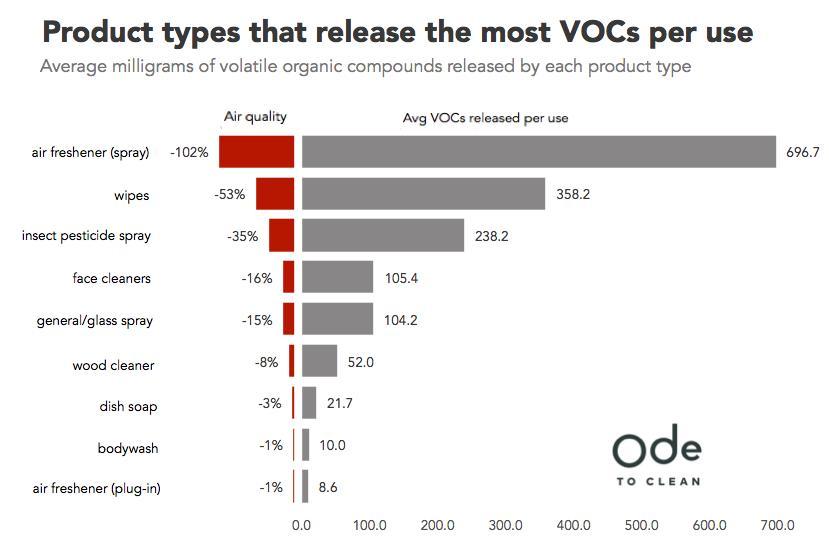 The average indoor space has VOC levels at about 10 milligrams per cubic meter. For our calculations, we approximated an average room at 68 cubic meters (300 square feet with 8-foot ceilings), so a typical room has about 680 milligrams of VOCs in the air at any given time.

Air freshener sprays release the most VOCs by far, averaging nearly 700 milligrams per use (30 milliliters of spray). That means that a single use doubles the amount of VOCs in your living room. Cleaning wipes give off about 350 milligrams per use (4 wipes), followed by insect pesticide sprays and face cleaners. On average, bodywashes and plug-in air fresheners emit the fewest VOCs per use.

Next, we ranked the top 10 products that release the most VOCs per use. 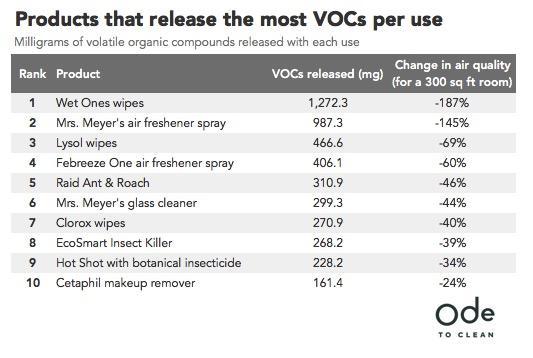 Next, we identified the product in each category that releases the most VOCs.

Wet Ones emits the most VOCs for wipes; Mrs. Meyer’s the most for air freshener spray and glass cleaner. Cetaphil makeup remover releases more VOCs than Pledge wood cleaner.

Since these products are used in different frequencies, wipes up to several times a day versus bodywash a single time, we calculated which products would release the most VOCs over a full year. 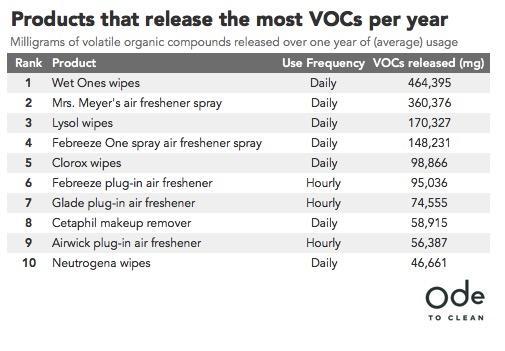 If you used four Wet Ones wipes each day for a year in a closed environment, you would add nearly 465,000 milligrams (almost half a kilogram) of volatile organic compounds to your home’s environment, nearly three times the amount released by the next most VOC-heavy wipes, Lysol, which would expel 170,000 milligrams per year.

The real change in the ranking lies with the plug-in air fresheners. They release a small amount of VOCs per puff (6-10 milligrams), but when you take into account that the scent is delivered continuously, it adds up to 56,000-95,000 milligrams per year.

Our calculations are based on recommended usage amounts (e.g., four wipes, 30 milliliters of air freshener spray); what if you don’t use the typical amount? We determined which cleaning products release the most VOCs per gram to see which products have the highest VOC content. 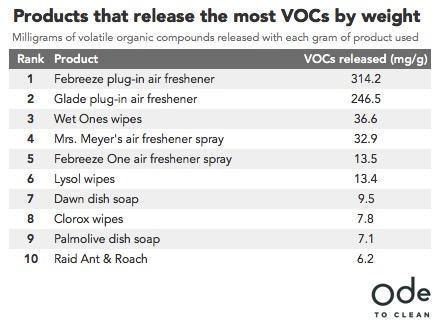 There is a wide variation in how much VOCs are released by different products. Below, we rounded up the top ten products that released the fewest VOCs per use. 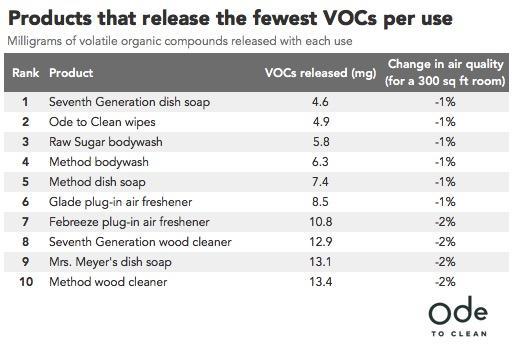 The complete study results are shown in the table below. 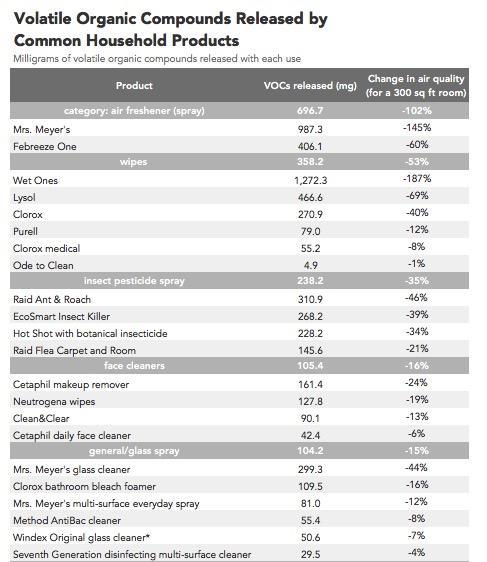 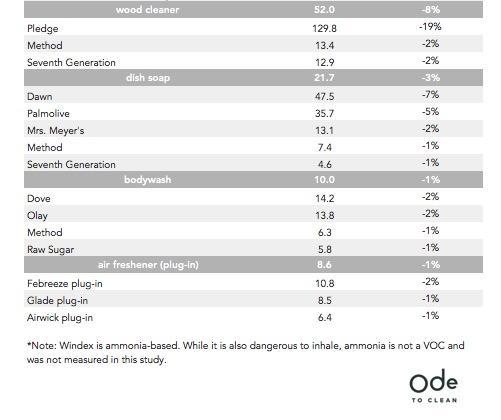