Which Companies Lost the Most Fake Followers In the Twitter Bot Purge? 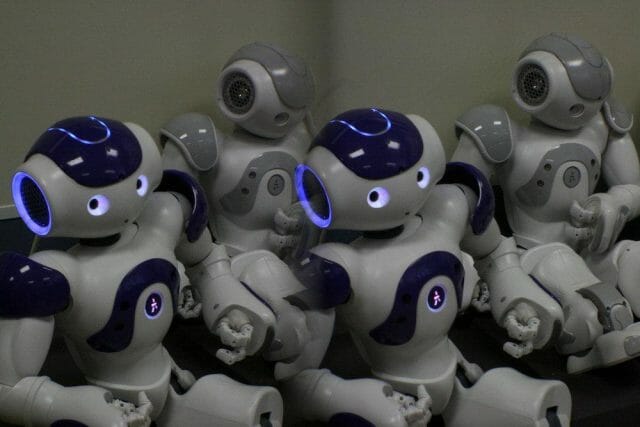 On July 11, 2018, Twitter announced in a blog post they would be removing all “locked” accounts – those exhibiting suspicious or spammy behavior – from the service and warned that by doing a sweep of these accounts, many users would lose a pretty significant number of followers.

One of the metrics Craft tracks on companies is social media engagement, so we looked through our database before and after the purge to see which company Twitter accounts lost the most followers.

The table below shows the 25 companies with the highest number of lost followers: 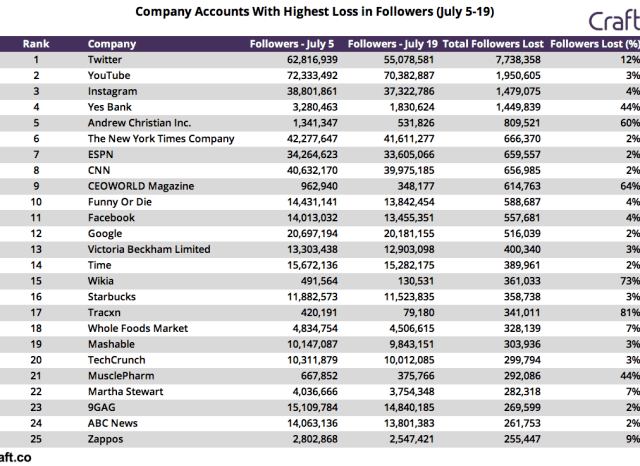 Next, we looked at which of the largest accounts were least affected by this purge. We filtered our list of companies to those with more than 500,000 Twitter followers. Of those, twenty-five companies were in fact so unaffected, they actually gained followers in this period.

Blockchain and Cryptocurrency-related companies (Coinbase, Bittrex, Bitcoin, and others) are heavily represented in this list above, perhaps surprisingly showing themselves relatively immune to the Twitter purge of bot accounts.

It is possible these accounts gained followers so rapidly that the followers they lost in the purge were quickly gained back, yielding a net positive increase in followers. Epic Games (creator of Fortnite), for example, gained 86,600 followers in the two week period after July 19. Similarly, the Blockchain and Cryptocurrency-related accounts each gained under 10,000 new followers in the two week period after the purge was complete. And therefore, as these post-purge numbers are similar to the increase in followers during the purge, this suggests there were not a huge number of accounts removed from their follower counts.

For companies with over 500,000 followers, the chart below shows how many companies lost what percentage of their followers: 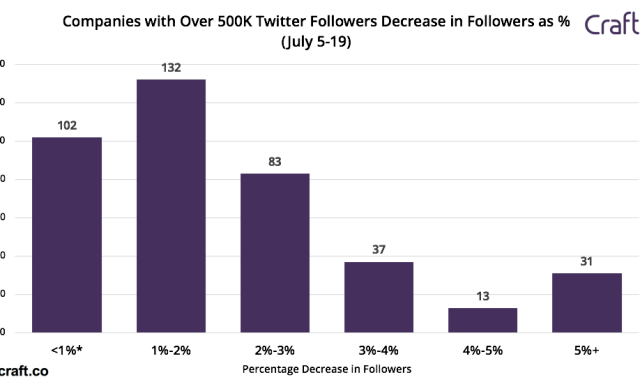 *Note: the <1% category includes the 25 companies that gained followers during the period.

The mean decrease in Twitter followers for these larger accounts was 2.6%. The median loss, however, was 1.7% – the difference is due to a skewed right distribution from a handful of accounts that suffered heavy losses. Four accounts lost over 40% of their followers: CEOWORLD Magazine (-64%), Andrew Christian Inc. (-60%), Yes Bank (-44%), and MusclePharm (-44%).

As markets look beyond financials to measure the health, value, and future potential of a company, alternative metrics can be used to gauge company vitality. One of these metrics is audience engagement on social media. Bots and spam accounts were clearly distorting the true picture regarding companies’ real social media followings, so it was a helpful move from Twitter to reduce fake accounts and improve the signal to noise ratio on the platform.