Which Countries Are the Most/Least Overrun by Tourists? 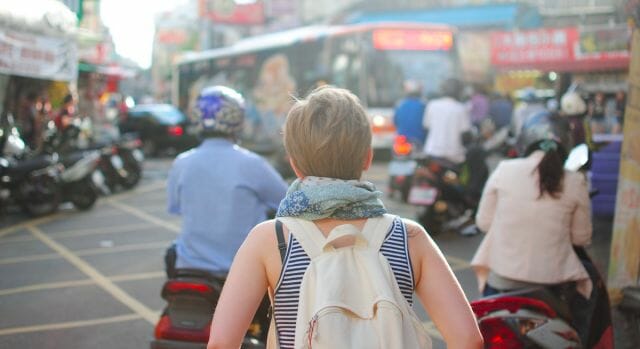 “Visit Bangladesh before the tourists come.”

This post is written by Dan Kopf, Priceonomics Staff Writer

The intrepid traveller will often complain that a place has become too touristy, too filled with their own kind. They want to get “off the beaten path” and find unspoilt beaches and “authentic” experiences.

But today international travel is increasingly accessible, which makes it harder and harder to find places untainted by tourists. Advising people to visit places like Myanmar and Cuba—before hoards of tourists arrive to spoil it—is a staple of travel writing.

So, if you want to visit a place not overrun by tourists, where should you go? In other words, which are the least “touristy” countries in the world?

We turned to data from the World Bank to find out. We discovered that Bangladesh is easily the country where you are least likely to be surrounded by fellow travelers, with over 1,000 people in the population per every tourist visit. In contrast, for many of the island nations in the Caribbean and small European countries, more tourists visit annually than those countries have people.

While it can feel like tourists are straining the capacity of every country’s most famous and popular sites, there are countries where few travelers visit.

We know this because the World Bank tracks the number of “tourist visits” to every country in the world. A tourist visit is any time a person travels to a country for less than twelve months without being paid to do so (meaning it’s not for work). By this measure, one person may account for multiple tourist visits to a country. The metric does not distinguish between people who visit for a day and people who stay for weeks.

To find the least touristy countries, we took a simple measurement: the population of a country divided by the number of tourist visits. This gives us a general sense of where there are a lot of residents and not many tourists.

The following table lists the 25 least touristy countries in 2014—the most recent year for which data is available—according to our measure. 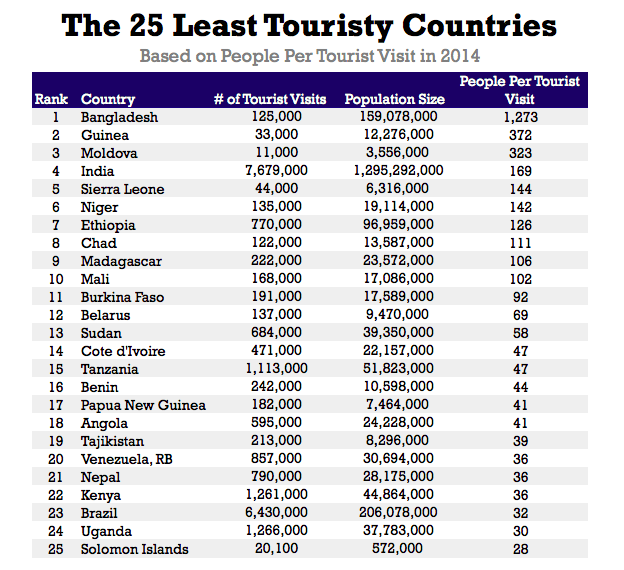 Bangladesh, the eighth most populous country in the world with nearly 160 million people, only received 125,000 tourist visits in 2014. By comparison, nearby Bhutan received 137,000 visitors in 2014 even though it only has a population of 750,000. Bangladesh’s lack of tourists inspired the country’s old tourist board slogan: “Visit Bangladesh before the tourists.”

Why is there so little tourism in Bangladesh? One potential explanation is the country’s reputation for natural disasters and political strife. The country, which is among the poorest in the world, also suffers from a lack of tourist infrastructure.

Other rarely-visited countries include Guinea, Niger and Ethiopia. This demonstrates that tourists still flock to countries with higher living standards and amenities.

While many people visit India, its huge population is responsible for its ranking as the 4th least touristy country. With nearly 1.3 billion people, its 7.5 million tourist visits in 2014 were a drop in the bucket. Bulgaria, which receives almost as many tourist visits as India, has only one person for every 200 Indians.

So which country is the most touristy?

The following table lists the 25 top countries by this measure. 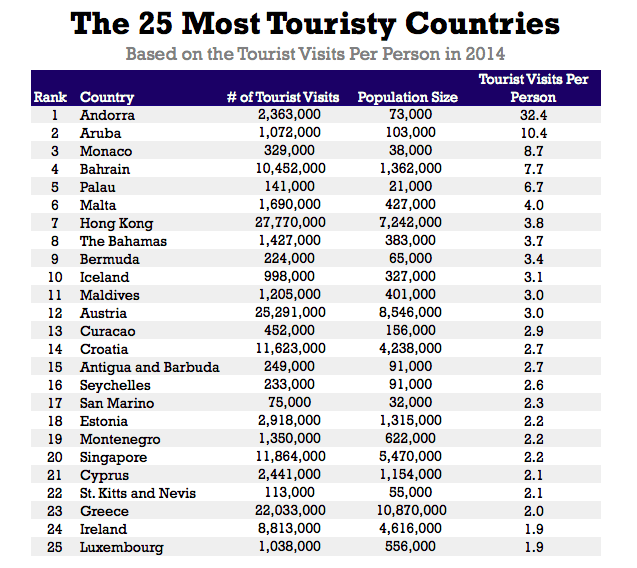 With a population of less than 75,000 people and over two million tourist visits per year, the tiny mountainous country of Andorra, nestled between Spain and France is the most touristy place in the world. Skiers and outdoors enthusiasts flock to Andorra, and revenue from tourism makes up 80% of the country’s GDP.

Many of the most touristy countries are small islands like Aruba, Palau and Bermuda. The only country with more than 10 million residents that ranks in the top 25 is Greece. France, the country with the largest number of tourist visits in the world (84 million), does not make the list due to its large population (66 million).

While Andorra is at the top of the list, its tourism industry seems to be on the decline. There were 2.8 million tourist visits to the country in 2004, but less than 2.4 million in 2014. Bermuda and Barbados have also seen a decline in their tourism sector over that period.

If Bermuda and Barbados fall off the most touristy list, which countries might replace them? To answer this question, we examined the countries which have seen the largest jump in “touristiness” from 2004 to 2014. Georgia is the world’s hottest country in terms of tourism. It received less than 400,000 tourist visits in 2004, but more than 5.5 million in 2014. Citizens of neighboring Russia and Turkey, who have flocked to the cheap and geographically diverse country, have driven the increase.

Many of the countries on this list, like Congo-Brazzaville, Montenegro and Serbia, are recovering from wars. Other fast growing countries, like Sudan and Ethiopia, previously welcomed so few tourists that even a modest increase in tourism changed their “touristiness” drastically.

One particularly interesting case is that of Myanmar. One of the world’s most oppressive military states as recently as 2009, the country has dramatically liberalized in the past six years. A boom in tourism coincided with that liberalization. From 2011 to 2014, the number of tourist visits almost quadrupled from about 800,000 to over 3 million, and the tourism boom doesn’t look to be ending any time soon. 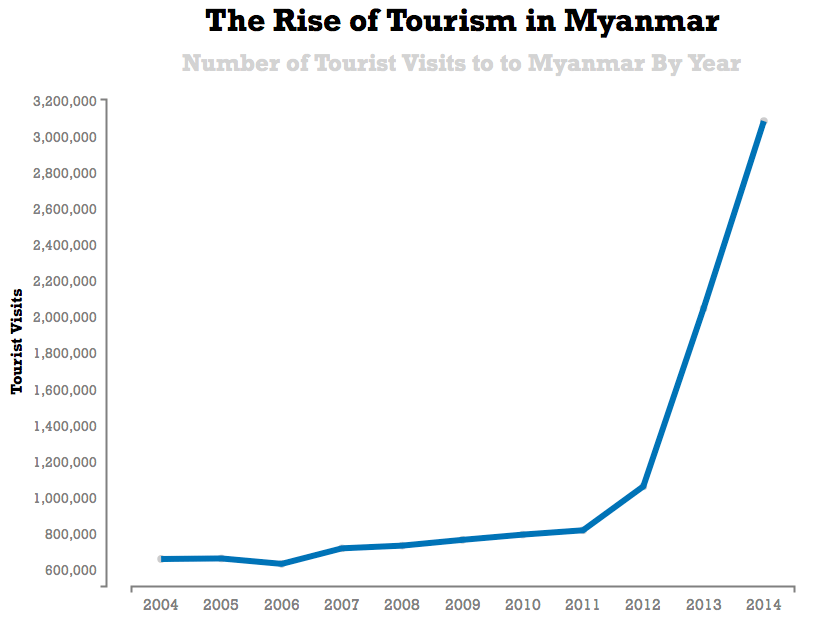 For many tourists, meeting locals and avoiding others like themselves is the key to a great travel experience. These visitors believe a genuine experience of the local culture cannot be found when surrounded by others of their ilk. Our analysis shows that these tourist-avoiders should stay away from the Caribbean and Europe, and visit Bangladesh before it’s too late.

Our next post looks at why an organization is raffling off a swank house in San Francisco. To get notified when we post it →  join our email list.