Which Countries Have the Most Immigrants? 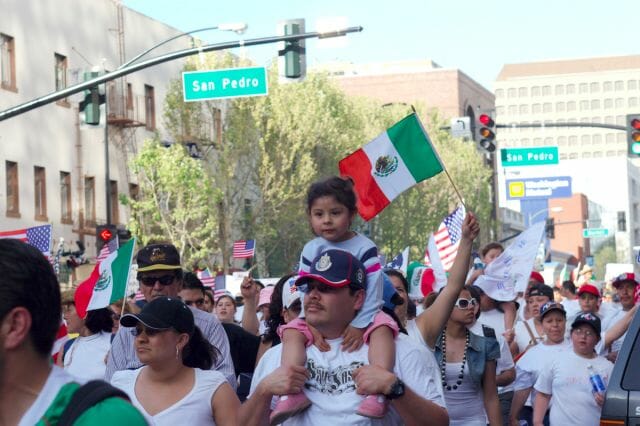 Immigration is now at the center of American and British politics.

One of the primary reasons the British voted to leave the European Union was anti-immigration sentiment. Donald Trump’s rise as a major political figure – with over 40% of the voting public supporting him – is largely attributable to his insistence that curtailing immigration is the way to regain America’s “greatness”.

Nigel Farage, former leader of the anti-immigration UK Independence Party, says foreign-born residents have made his country “unrecognizable.” “The U.S. has become a dumping ground for everybody else’s problems,” Trump said in reference to immigration during his announcement that he was running for President.

We can answer these questions because every five years, the United Nations Population Division publishes estimates of the size and birthplace of every country’s foreign-born population. These data are obtained primarily from population censuses done by these nations. These estimates include unauthorized immigrants.

Our analysis of the data shows that, among large countries, the United Kingdom and United States do in fact have very high proportions of foreign-born residents and that these populations are growing quickly. The U.S. and UK are changing, and it should not be shocking that it has provoked a reaction.

But the UK and U.S. are not alone. Foreign-born residents make up a similar share of the population—and are growing at a similarly high rate—in countries like Canada, Germany, and Spain. Though anti-immigration groups have emerged within these countries, they have not seen mainstream nativist political movements as intense as those in the United States and United Kingdom. 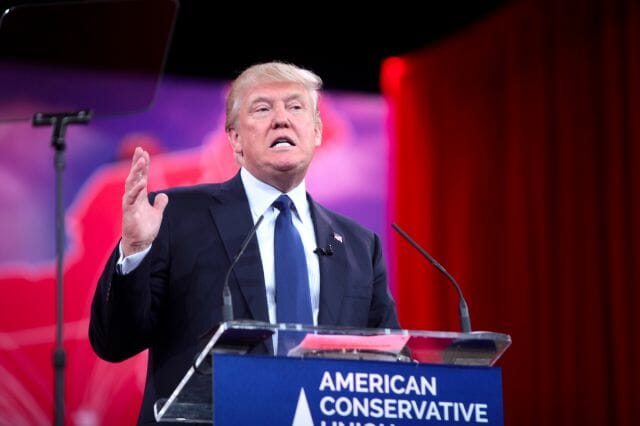 So what is a “normal” amount of immigration? Well, as of 2015, about 3.3% of the world’s population lived in a country they were not born in.

The following table ranks the world’s 50 most populous countries by percentage of foreign-born residents. Had we included all countries, the Vatican, where nearly all residents are foreign-born, would be number one. 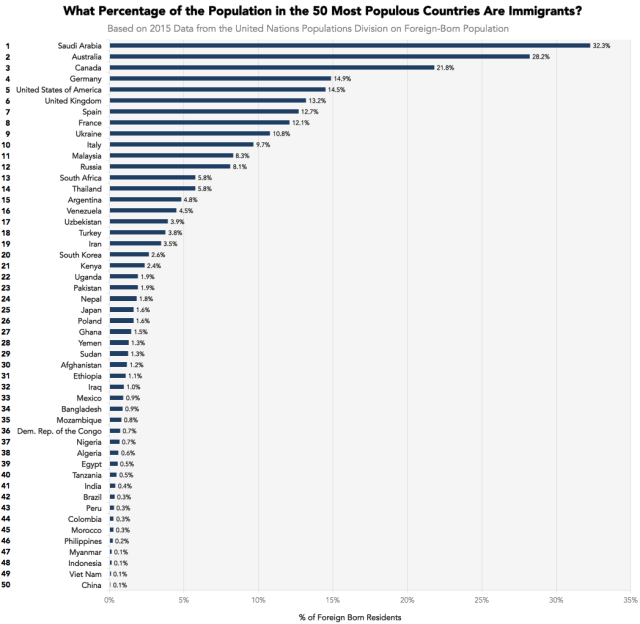 With nearly one third of its residents born outside its borders, Saudi Arabia has the most foreign-born residents of any large country. Saudi Arabia has a long history of allowing low-skilled foreign laborers to work in its construction sector, but rarely grants these migrants citizenship.

While the United States (14.5%) and United Kingdom (13.2%) rank 5th and 6th respectively, Australia, Canada, and Germany all rank above them.

For most of the 20th Century, Australia (28.2%) has had one of the world’s highest rates of foreign-born residents. Over the last several decades, Australia has combined strict policies barring unauthorized immigration with a more expansive legal migration policy. Although it is emerging as a contentious political topic, concern about immigration has not reached the boiling point there as it has in the US and UK.

Canada (21.8%) is unique among the countries with a high foreign-born population in that there are few signs of increasing xenophobia. Canada has welcomed Syrian immigrants at a rate unlike any other country, and only a small minority of the country sees immigration as more of a problem than an opportunity.

Germany (14.9%) was the European leader in terms of taking in asylum seekers from 2008 to 2014. Though the country, which has an obvious history of nationalism and xenophobia, has recently seen the rise of an anti-immigration party, the mainstream parties in the country continue to be pro-European Union and pro-immigration.

The data suggest that the U.S. and UK do have large amounts of immigration, but so do others, and this cannot fully explain their mainstream, anti-immigrant backlash.

Perhaps the current political upheaval concerning immigration in the UK and U.S. is less related to the absolute number of immigrants, but rather in how quickly that number is increasing. As The Economist noted, the areas of the UK most likely to vote for Brexit were not the places with the highest proportion of immigrants, but areas that had seen the largest proportional increase.

The overall percentage of the world’s population living in a foreign country grew from 2.9% in 1990 to 3.3% in 2015. The following table shows which of the world’s most populous countries have seen the largest absolute change in their foreign-born population during that period. 1990 is the earliest year for which comprehensive data is available. 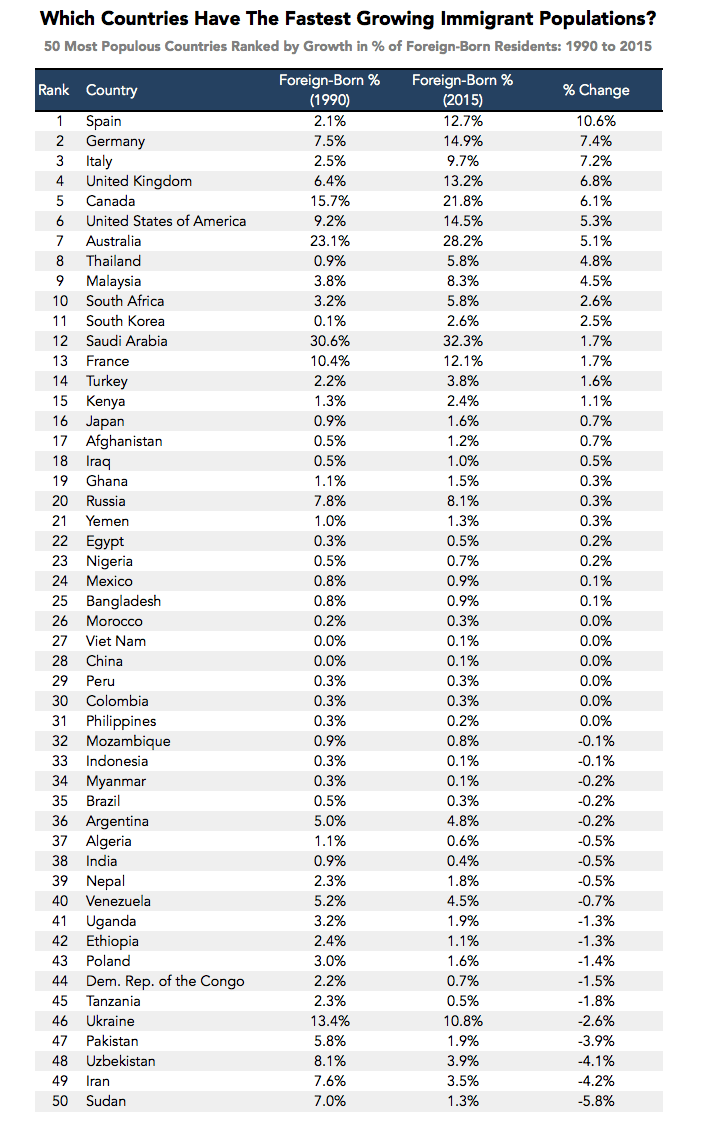 With a 10.6% change in its foreign-born population, Spain moved from the 26th ranked country in 1990 in terms of share of foreign-born residents to 7th in 2015. This was largely due to Spain’s need for workers in the service and construction industries, sectors that could not attract native-born residents in sufficient quantities. So far, the country does not appear to be experiencing a marked rise in anti-immigration sentiment.

The four top countries, in terms of the absolute change in the proportion of foreign-born residents, are in the European Union.

Formally established in 1993, one of the precepts of the European Union is that its members’ citizens are free to emmigrate to other member countries for education or work. This led to large migrations of citizens within the European Union from the poorer countries, mostly in the Eastern part of the continent, to stronger economies – such as the massive movement of Polish people to the United Kingdom.

The chart below from the Pew Research Center shows the relative size of the foreign-born population along with future projections. The share of the population that was not born in the United States reached a low around 1970, but has been steadily climbing since. This followed a change in policy in 1965 that ended country origin quotas and focused immigration policy on reuniting families and attracting immigrants with strong employment opportunities. 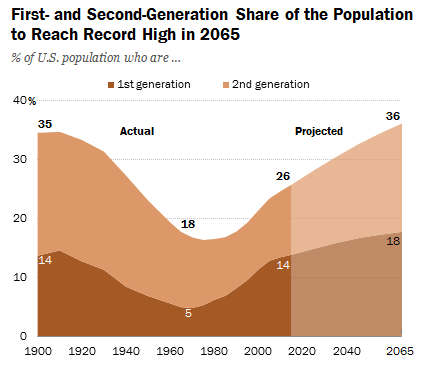 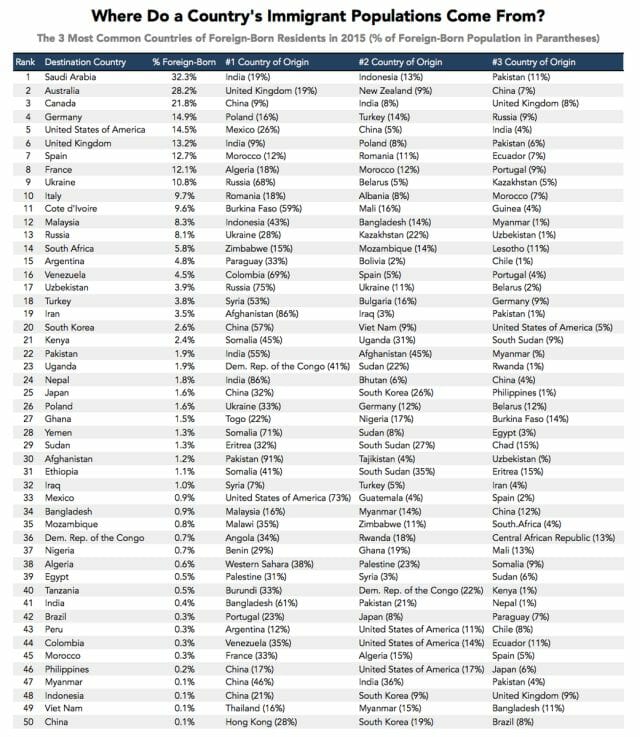 Unlike in the United States, no one country accounts for more than 10% of the United Kingdom’s foreign-born population. People born in India (9%) account for the largest percentage of foreign-born people, followed by Poland (8%) and then Pakistan (6%) 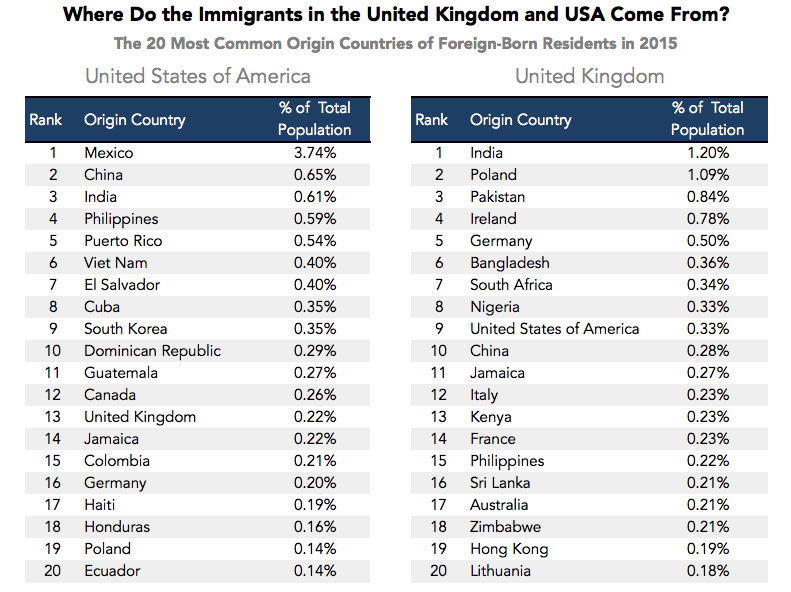 Yet if we look at which countries of origin have seen the greatest growth in the UK in terms of the proportion of the total population that comes from there, none of these countries appear. In other words, the composite of the current generation of immigrants is different from the last.

The percentage of the American population that was born in Mexico jumped from 1.7% in 1990 to above 3.7% in 2015. This 2% rise is almost five times greater than the change in the proportion of any other country. The increased number of Mexican-born residents accounts for almost 40% of the total increase in the foreign-born rate. When Americans speak about their concerns about immigration, they are largely speaking of the increased presence of Mexicans and other Central Americans.

Meanwhile, very little has changed in terms of the percentage of people from rich countries. The proportion of the American population from Canada, the United Kingdom, and Germany has remained relatively flat. The number of people in Britain from Germany, France and the United States is growing, but each by 0.14% or less.

The changes in the UK and the United States are quite representative of trends in developed countries. While the proportion of foreign-born residents has increased dramatically in what the United Nations calls “More Developed Regions” – this includes Europe, the U.S., Canada, Australia, New Zealand, and Japan – the proportion of foreign-born residents in the “less developed regions” – including Africa, Latin America and Asia (except Japan) – has barely changed. 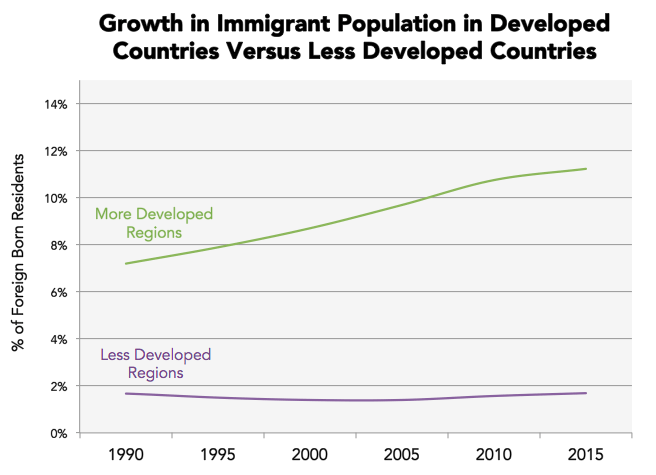 So is what is happening in the U.S. and UK unique?

The movement of people from poor to rich countries has been a part of world migration patterns for hundreds of years. In the 19th and early 20th centuries, immigrants from poor countries flocked to the United States for its economic opportunities. In the early 20th century, around 1% of the British population was born in less wealthy Ireland.

Most research suggests that, in aggregate, this pattern of immigration is very good for the economies of the United States, the United Kingdom and other high income countries. While American and British-born workers tend to be “mid-skilled”, immigrants are disproportionately high and low skilled workers who plug gaps in the labor force. Immigration has also been the source of much of the culture that Americans and British are most proud of.

In parts of the UK and U.S., anti-immigration sentiment has reached a fever pitch. For those who see immigration favorably, it is worth considering why that might be. The fact that the size and growth of the foreign-born population is reaching new heights is a likely contributor. But given that the same levels of nativism have not reached the mainstream in other countries with similar immigration growth rates, it is not the only explanation.

Our next article explores the 100-year history of celebrity pets—and how cuddly pugs become cash machines. To get notified when we post it  →  join our email list.