Which Countries Make the News? 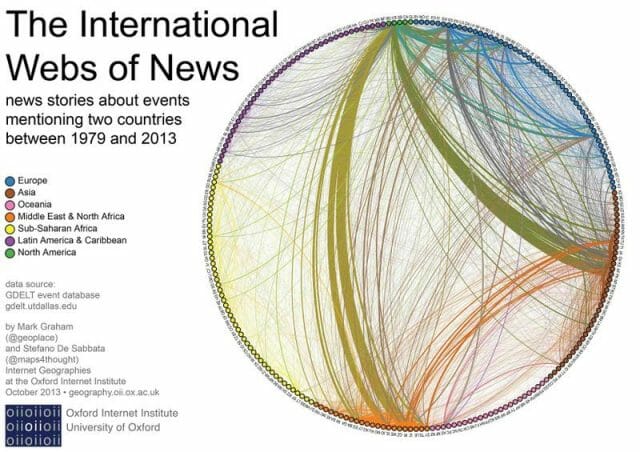 It’s often said that the media neglects parts of the world, or that a few countries and stories disproportionately dominate headlines. Now, thanks to the efforts of researchers at the Oxford Internet Institute, we can see how media around the world prioritizes its attention.

To create the above graphic, the researchers drew from the Global Database of Events, Language, and Tone, which machine-codes articles from news sources around the world to geotag the location of events and the actors involved. This allowed the researchers to look at how often publications cover stories involving multiple countries. In the graphic, each region has a different color and each circle of the outside ring represents a different country. (The country codes are available here via Wikipedia.) Thicker lines mean more news stories.

The visualization shows how interactions between America and a few usual suspects – Iran, Afghanistan, Iraq, Russia, Israel, China, Korea – in the Middle East and Asia dominate headlines. Journalists have often noted that even publications with a global scope will only devote one full-time editor to large chunks of Africa, if not all of Sub-Saharan Africa. Here we see the lack of attention paid to Africa very starkly.