Which Industries Are Investing in Artificial Intelligence? 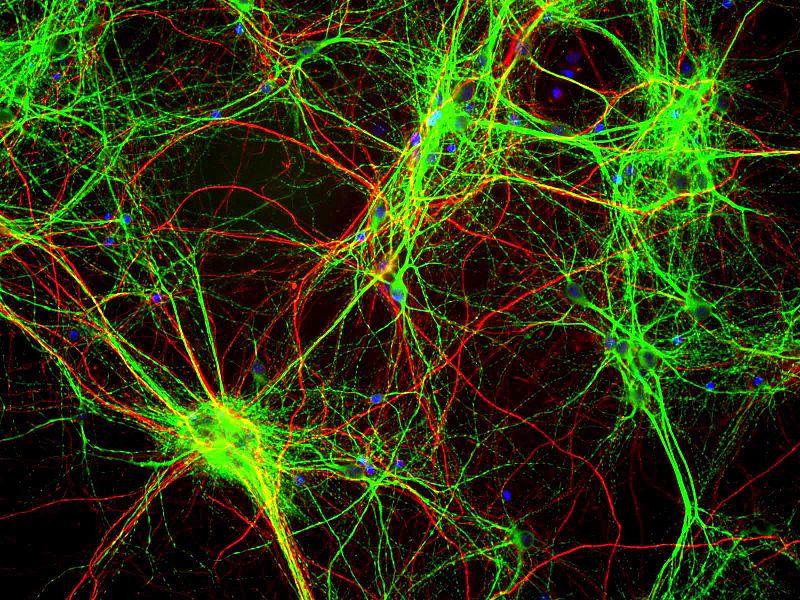 Earlier this year, a shockwave landed in the artificial intelligence space with the news that Udi Manber, who used to run search engineering at Google, was joining the health insurer, Anthem to head up its AI group. After all, it’s not every day that industries with reputations for spurning tech and collecting reams of paper land a preeminent technologist in a burgeoning field.

But the move by Anthem could be a sign of the shift in how companies and industries think about artificial intelligence and whether it is relevant to their businesses. While in the past, AI may have been considered the province of large tech companies, increasingly non-tech firms are embracing how it can improve their performance.

In this article, we look at the artificial intelligence market and analyze which industries are investing in AI and what that means exactly in terms of useful applications that are being implemented today, and what this means for the AI talent market.

We found that much AI investment is currently dominated by large tech companies like Google, Amazon, Baidu and Microsoft. However, between 10% to 30% of non-tech companies are also adopting AI technologies, depending on the industry.

While non-tech companies have yet to play a large role in artificial intelligence investment, the current market is a fraction of its projected size. Put differently, AI is at a very early stage in its development and industries that invest heavily in the next few years can still be ahead of the curve.

When we talk about AI spending, we’re typically talking about investment that companies are making in building AI capabilities. While this may change in the future, McKinsey estimates that the vast majority of spending is done internally or as an investment, and very little of it is done purchasing artificial intelligence applications from other businesses.

In 2016, McKinsey pegs that approximately $34 billion was spent on artificial intelligence development. The vast majority of that was internal corporate spending. 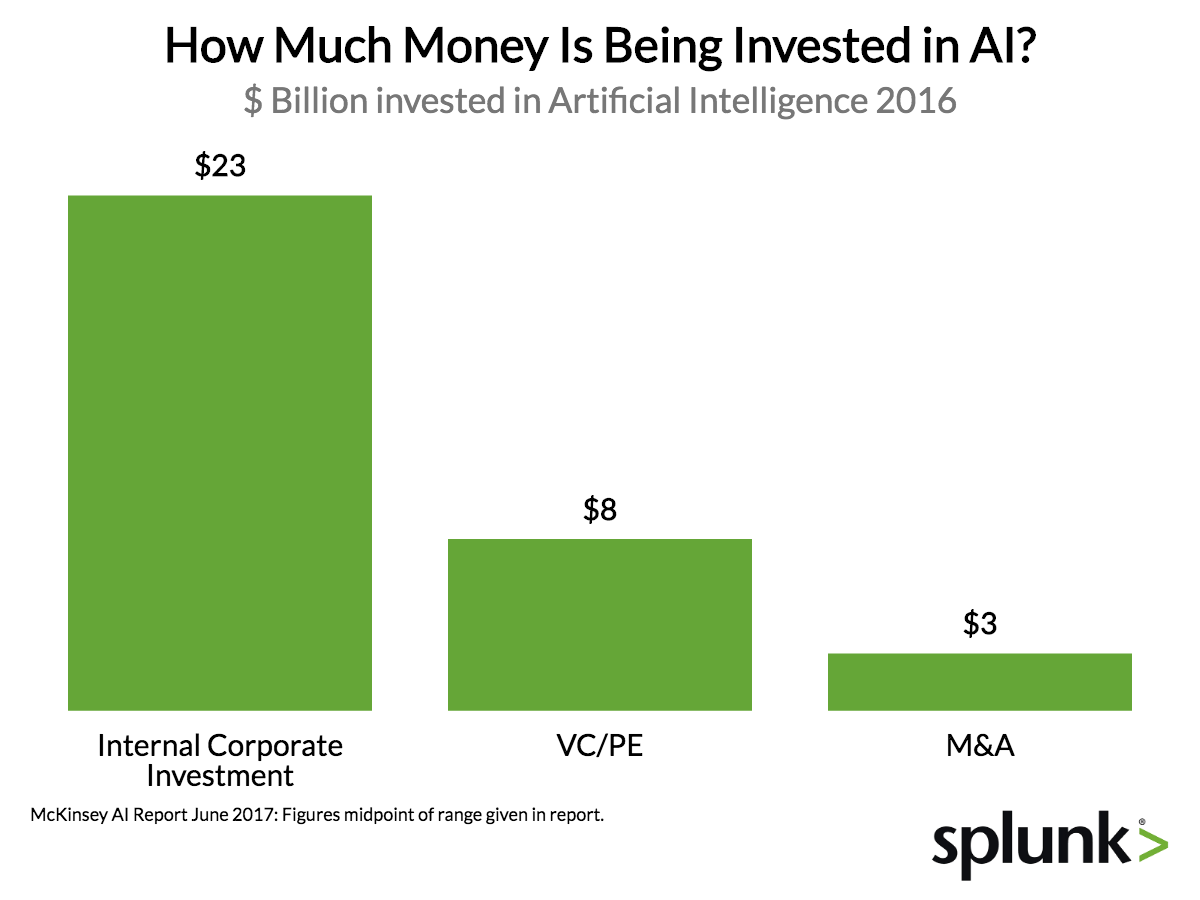 Internal Corporate spending makes up $23 billion of AI investment, nearly three times more than the current levels of venture capital and private investment in the space. This massive amount of investment is not evenly distributed among firms, however. McKinsey estimates that tech giants like Google and Baidu spend $20-30 billion per year on AI, the vast majority of this category spend. 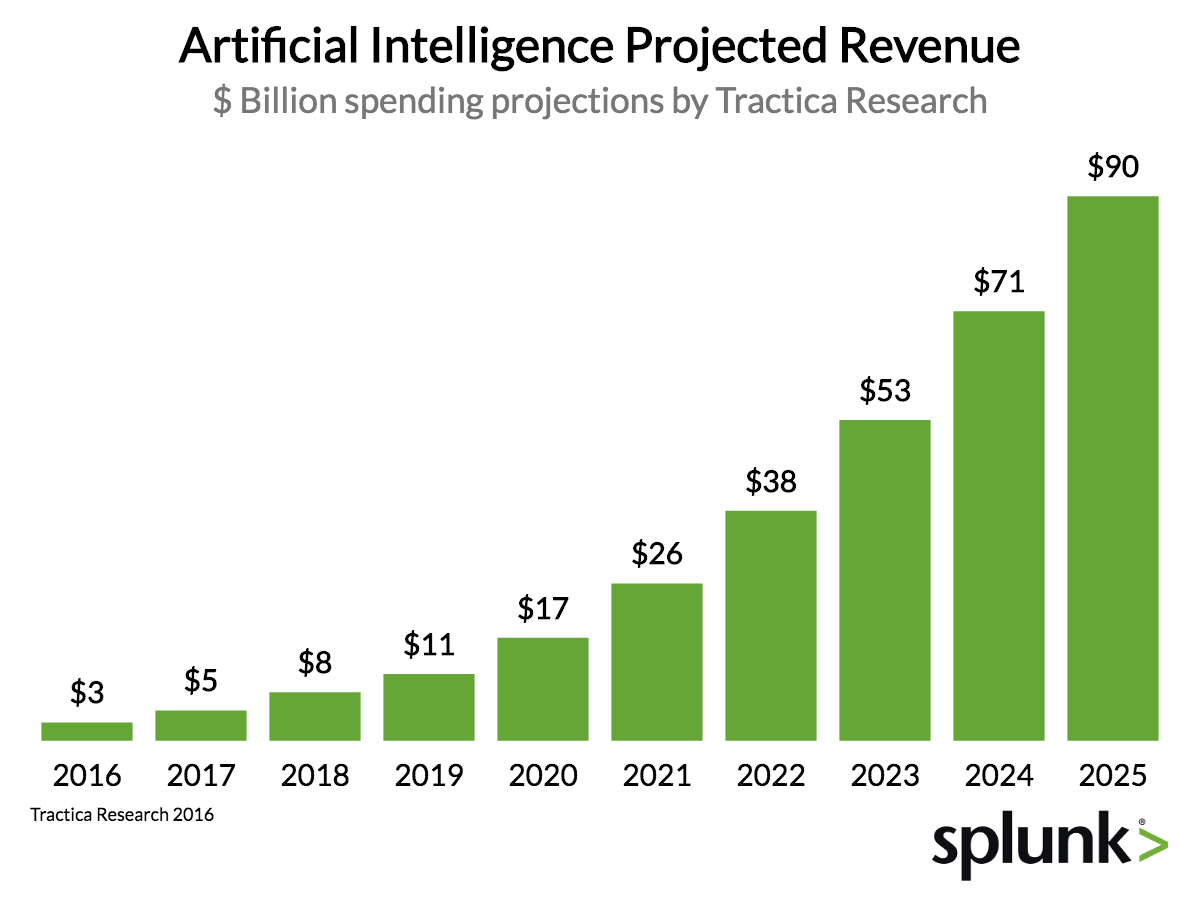 While current levels of external spending on AI software are dwarfed by internal spending today, the AI software market is expected to grow rapidly to nearly $90BN by 2025. For companies that are still considering their level of investment in AI, it may be comforting to know that the market is still a fraction of its future potential and they are not necessarily behind the curve.

Still, machine learning and artificial intelligence are sometimes (erroneously) used interchangeably. This error is perhaps not surprising given that machine learning is the largest category of investment within the AI landscape: 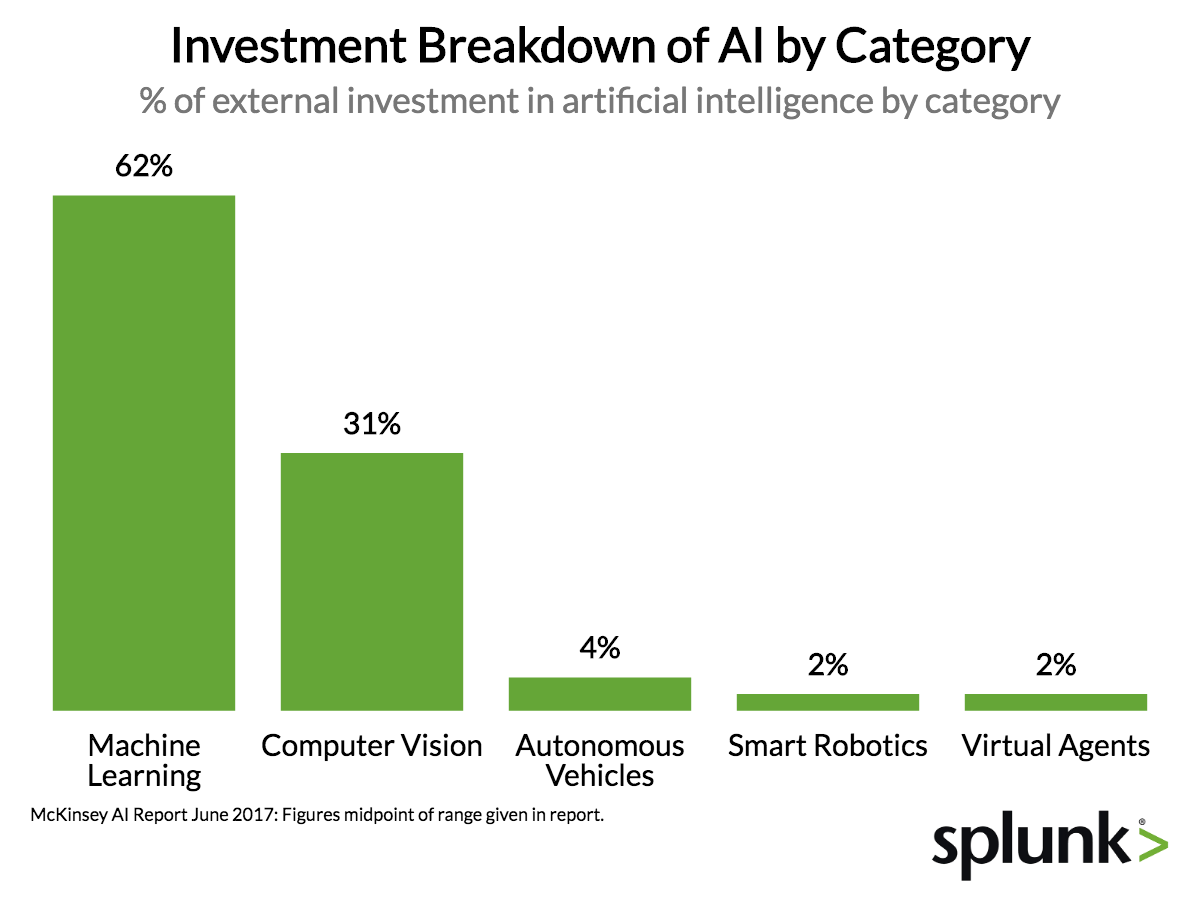 62% of AI spending in 2016 was for machine learning, twice as much as the second largest category computer vision. It’s worth noting that these categories are all types of “narrow” (or “weak”) forms of AI that use data to learn about and accomplish a specific narrowly defined task. Excluded from this report is “general” (or “strong”) artificial intelligence which is more akin to trying to create a thinking human brain.

Investor and AI entrepreneur Bradford Cross suggests that industries that are large (high market capitalization) and profitable (high gross margin) would be good initial targets for AI application adoption. Using that framework, tech, financial services and healthcare would qualify as good initial industries for AI applications. Cross also notes that you see a lot of successful startups targeting some of these industries:

“This is a good example where the data are all aligned -- fintech and healthcare are the largest markets with the highest margins and the most representation among both unicorns and AI startups. So these are solid markets to aim at.”

McKinsey surveyed 3,000 executives on their firms’ adoption of AI tech and then analyzed the results by industry. The below chart shows the percentage of firms in a given industry that have adopted AI technologies. 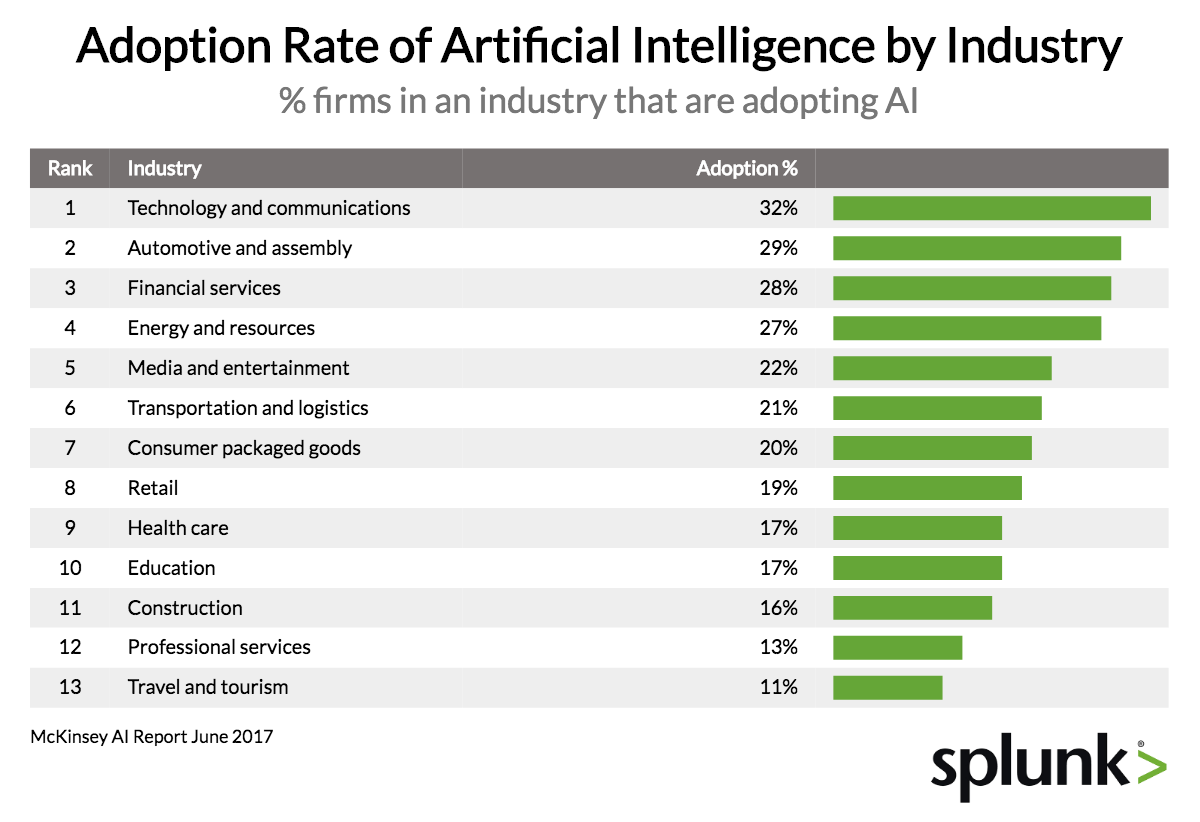 The McKinsey survey mostly fits well as evidence supporting Cross’s framework that large profitable industries are the most fertile grounds of AI adoption. Not surprisingly, Technology is the industry with highest AI adoption and financial services also makes the top three as Cross would predict.

Notably, automotive and assembly is the industry with the second highest rate of AI adoption in the McKinsey survey. This may be somewhat surprising as automotive isn’t necessarily an industry with the reputation for high margins. However, the use cases of AI for developing self-driving cars and cost savings using machine learning to improve manufacturing and procurement efficiencies are two potential drivers of this industry’s adoption.

What are all these companies actually using AI for? Tractica Research breaks down their projections for AI spending by category in 2025: 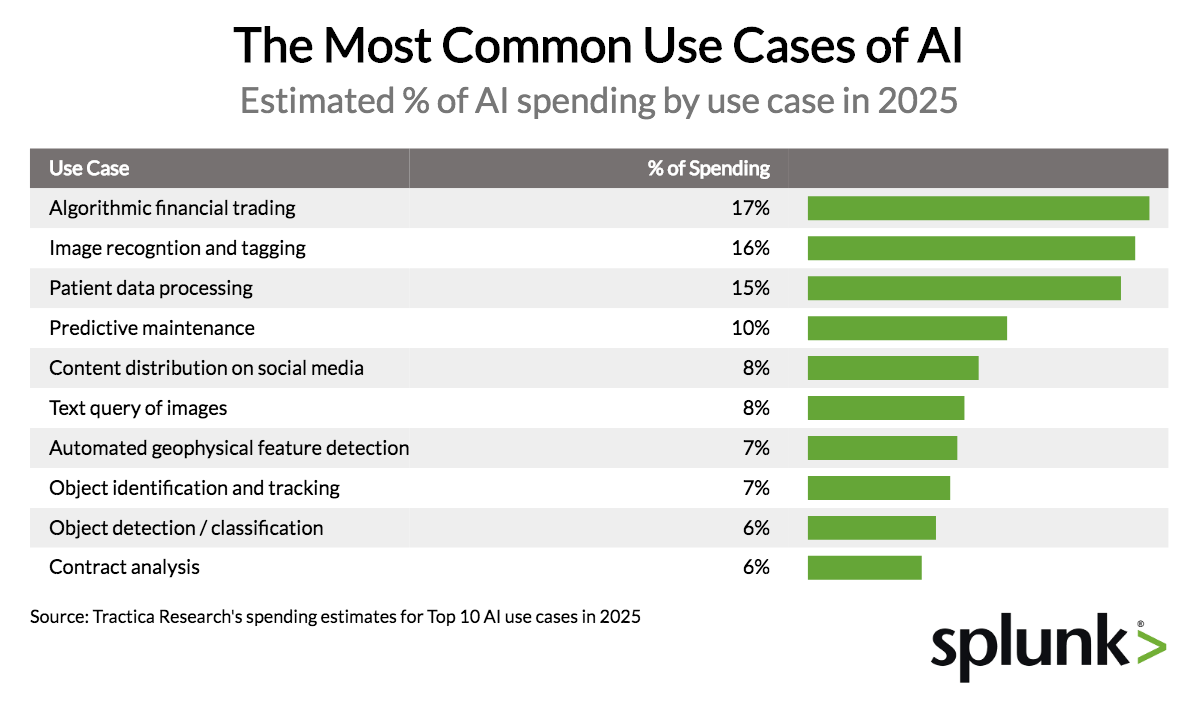 Algorithmic financial trading is the number one use case of AI spending according to Tractica, as evidenced by the enormous demand of AI engineers on Wall Street. The second and third largest projected use cases of AI are image recognition and patient data processing; perhaps we shouldn’t be surprised then to see health insurers making big plays to attract AI talent.

Tencent, the Chinese tech powerhouse, has estimated there are only 300,000 AI engineers in the whole world, a pittance compared to enormous and growing demand for their skills. As a result, there is an AI talent shortage that is evidenced by high salaries and hard to fill positions.

Part of the reason firms in profitable industries are making the largest investments in artificial intelligence is that they are among the few who can afford the market rate for the talent. According to The New York Times entry-level AI specialists are paid $300,000 to $500,000 per year, and that’s just the people with only a few years experience or fresh from a Ph.D. program. Some prized talent in the space have taken home more than $100 million during their time at places like Google. Some nonprofits in the space even pay their top researchers over a million dollars a year in order to compete with the private sector.

The prognosis for the price of AI talent in the future? Expect high market rates for talent, according to leading AI research Yoshua Bengio of the University of Montreal, “Of course demand outweighs supply. And things are not getting better any time soon...It takes many years to train a Ph.D.”

As a result, the jobs requiring artificial intelligence knowledge are very hard to fill. On the Indeed job search engine, they ran an analysis of how long it takes to fill job postings where a high percentage of the text in the descriptions have AI terms. The following chart shows how the percentage of these AI jobs that are still unfilled on Indeed 60 days later: 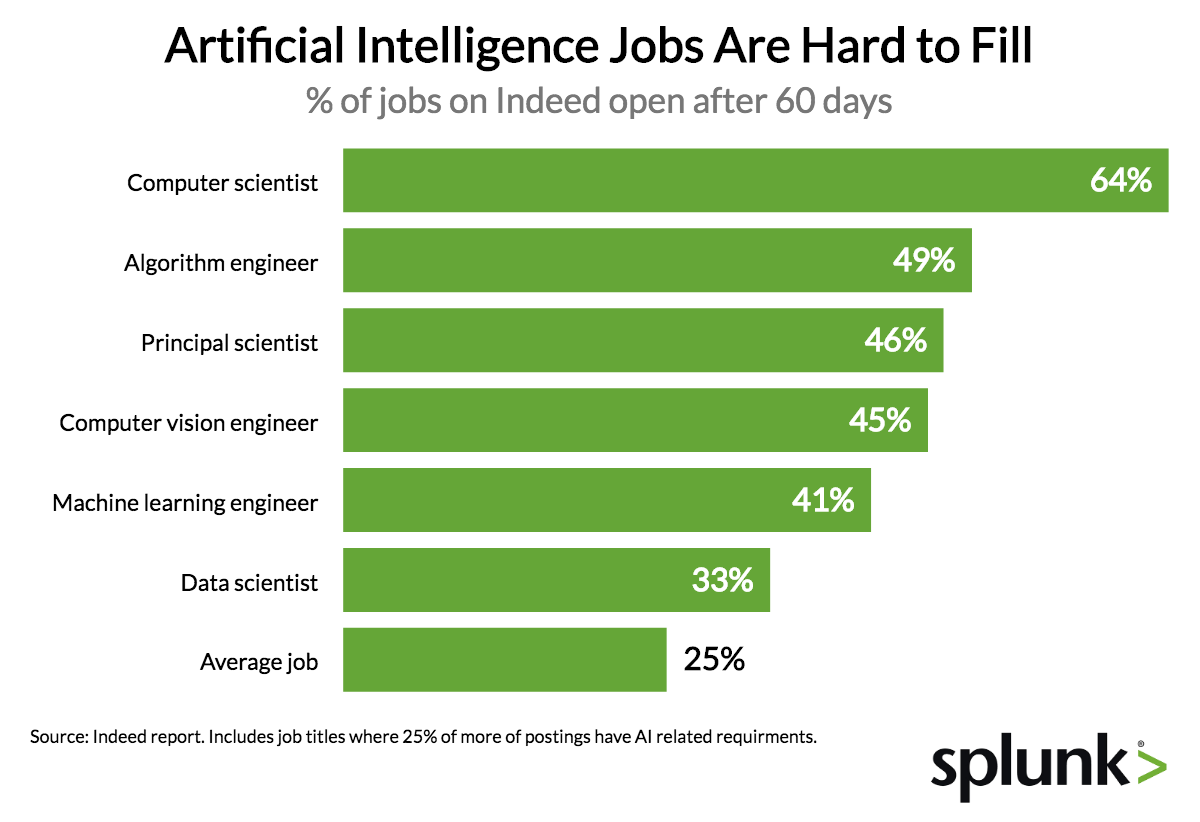 AI jobs are much more likely to be unfilled after 60 days compared to the typical job on Indeed, which is only unfilled a quarter of the time. As the demand for AI talent continues to grow faster than the supply, there is no indication this hiring cycle will become quicker anytime soon.

Which markets have the highest concentration of AI jobs? In the same report, Indeed looks at which metro areas have the highest share of artificial intelligence jobs? Not surprisingly, New York (the largest metro area) also has the most jobs in this sector: 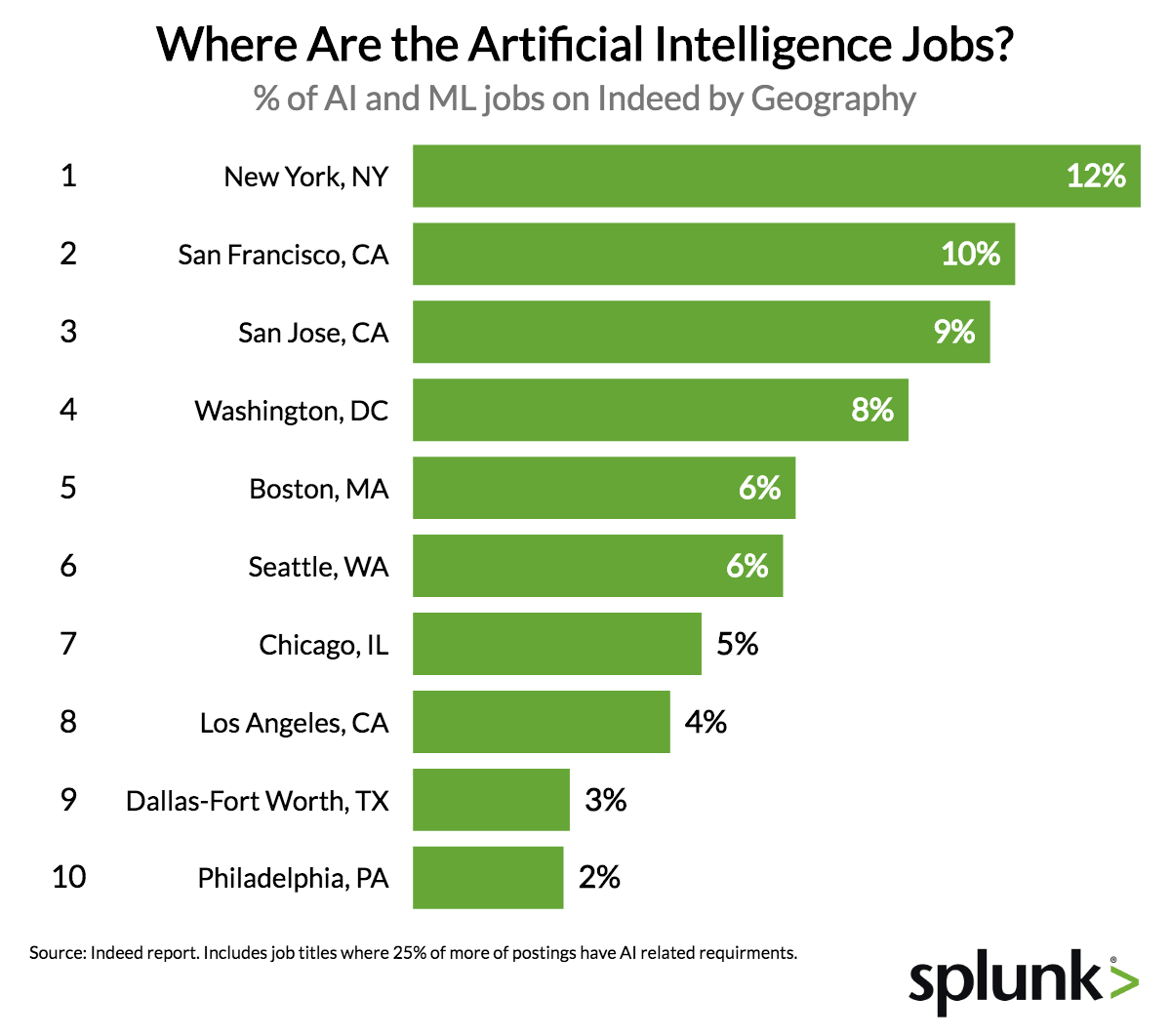 However, when you combine the San Francisco and San Jose areas, you get a combined 19% of AI jobs, leapfrogging New York by a substantial margin. When you consider that these Silicon Valley metros only have 7 million people compared to 20 million in New York, on a per capita basis there are 4.5 times more AI jobs in this Northern California region than the New York Metro.

“Our survey of more than 3,000 businesses around the world found that many business leaders are uncertain about what exactly AI can do for them, where to obtain AI-powered applications, how to integrate them into their companies, and how to assess the return on an investment in the technology.” - McKinsey Report

Artificial intelligence is at a crossroads as the analysts predict the markets are poised for a takeoff.

To date, spending on AI has been completely dominated by tech companies who see a clear return on investment and as a need to “future proof” themselves by being the leaders in the emerging space. Additionally, financial service firms have been quick to pick up AI talent because of their healthy margins and ability to profit any proprietary edge they can develop against the market.

But for non-tech and financial services companies, the question for the next five years is whether they invest more in AI or sit it out. Already, we’re seeing some unexpected companies like Anthem attract top talent in the space. Healthcare in particular may be poised to be the next industry to adopt AI en masse given its large amount of data that can fuel operational improvements.

One thing we know for certain is that it is very expensive to attract AI talent, given that starting salaries for entry-level talent exceed $300,000. A good bet is that the companies that invest in AI are the ones with healthy enough profit margins that they can afford it.

Splunk Inc. turns machine data into answers with the leading platform to tackle the toughest IT, IoT and security challenges. To learn more about AI and machine learning, check out the e-book 5 Big Myths of AI and Machine Learning Debunked.