Which Industries Will Be Transformed By Blockchain (and the Ensuing Data Glut That Follows)?

For all the attention that the Bitcoin cryptocurrency has garnered over the last decade, its most exciting contribution may be blockchain -- the technological breakthrough that made a viable, decentralized currency even possible.

For those who are not familiar, blockchain is the cryptographic breakthrough that enables decentralized electronic databases where all parties can coordinate and trust each other without the presence of a centralized authority.

While blockchain was invented by Satoshi Nakamoto and revealed as part of his seminal paper unveiling Bitcoin, its application goes far beyond Bitcoin or even cryptocurrency. Its potential to allow coordination among decentralized players could revolutionize the enterprise data space from supply chains to lending to mining.

Decentralized ledger technology (DLT) enables a number of benefits versus a database. First and foremost, the database is decentralized which allows for participants to coordinate without ceding control to a central authority. They don't know each other, but they can still trust each other. Relatedly, transaction costs have the potential to be much lower if you do not pay a fee to a centralized figure like a bank or a marketplace that’s guaranteeing the validity of the transaction.

Even within blockchain there is a continuum of just how decentralized the project is. On one hand, you have a pure “public” blockchain when any participant can join and contribute. On the other hand, you could have a “private” one controlled by one company and other parties received access only on a “permissioned” basis.

While there is a lot of excitement around blockchain, it’s important to remember that there needs to be a reason for choosing blockchain technology versus a traditional database. Namely, you need to be able to coordinate between multiple parties without a central authority.

Blockchain Applications in the Enterprise

Just how much traction is blockchain getting in actual real-world applications?

The answer is there is a tremendous amount of blockchain activity among startups looking to replace the status quo. Those startups have somewhat limited traction (outside of cryptocurrency), but are attempting to disrupt centralized databases, marketplaces, and even governments from all angles.

On the other hand, incumbent enterprises have adopted a more “wait and see” approach to the blockchain. Since they are the ones that currently control centralized ledgers, they’re not necessarily actively seeking to disrupt themselves, (but that would be preferable to being disrupted by a startup). Instead, enterprises have been mostly piloting private blockchains with trusted partners.

Some of the main areas with the most enterprise (and startup) blockchain application activity are:

Supply chain - A decentralized ledger among suppliers and customers to track the origin and status of goods. For example, FedEx has been experimenting with using blockchain for tracking high-value goods and Walmart has been doing so for tracking the origin of fruits and vegetables.

Physical and intellectual property ownership - From recording the title for property ownership to tracking the creators of music or photography and making sure they get paid, blockchain is being used by a variety of industry associations and startups to create a public, immutable record of ownership.

Smart Contracts - Contracts where the enforcement of execution of the agreement is implemented by protocol rather than through litigation. Smart contracts are built into Ethereum and promoted as part of IBM’s blockchains solution for developers.

Video games - A number of video games have used blockchain so that users actually own digital goods produced via the game. Examples of games that use blockchain to assign ownership of digital assets include CrypoKitties and Skyweaver.

During Bitcoin’s roaring price run-up in late 2017, the amount of attention surrounding blockchain also reached a fever pitch. Here’s a chart showing Google search interest for the term blockchain over the past 5 years.

While general public interest has waned in the last 12 months, what are enterprise attitudes toward blockchain technology? Has business interest in blockchain subsided along with Bitcoin’s price?

According to a Deloitte survey of industry of 1,386 senior executives blockchain interest remains high in the enterprise and is actually surging over the past year. 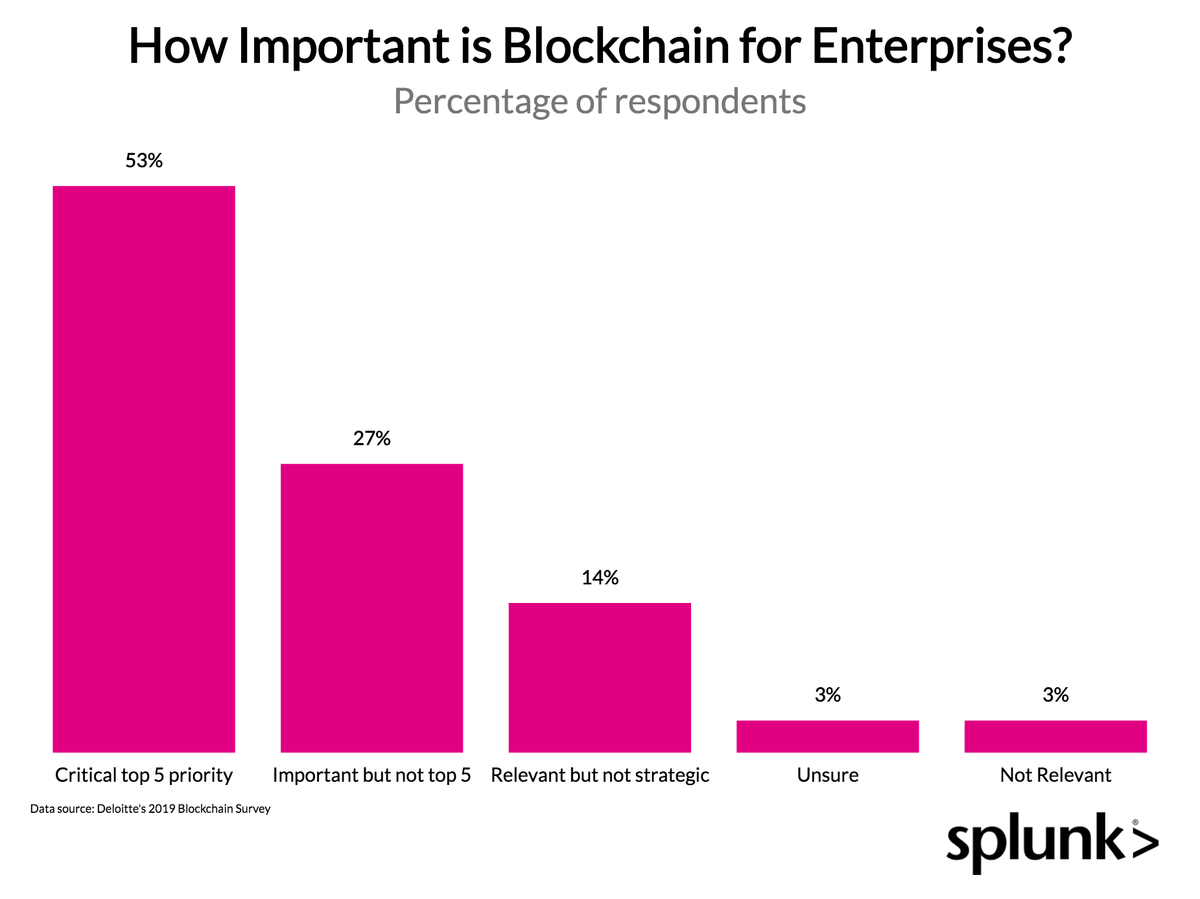 Of surveyed executives, 53% report that blockchain is a top 5 priority for the company. Only 3% of respondents said blockchain was not relevant. Despite less media attention to the topic, the percentage of executives prioritizing bitcoin as a top priority grew from 2019 compared to the prior year. 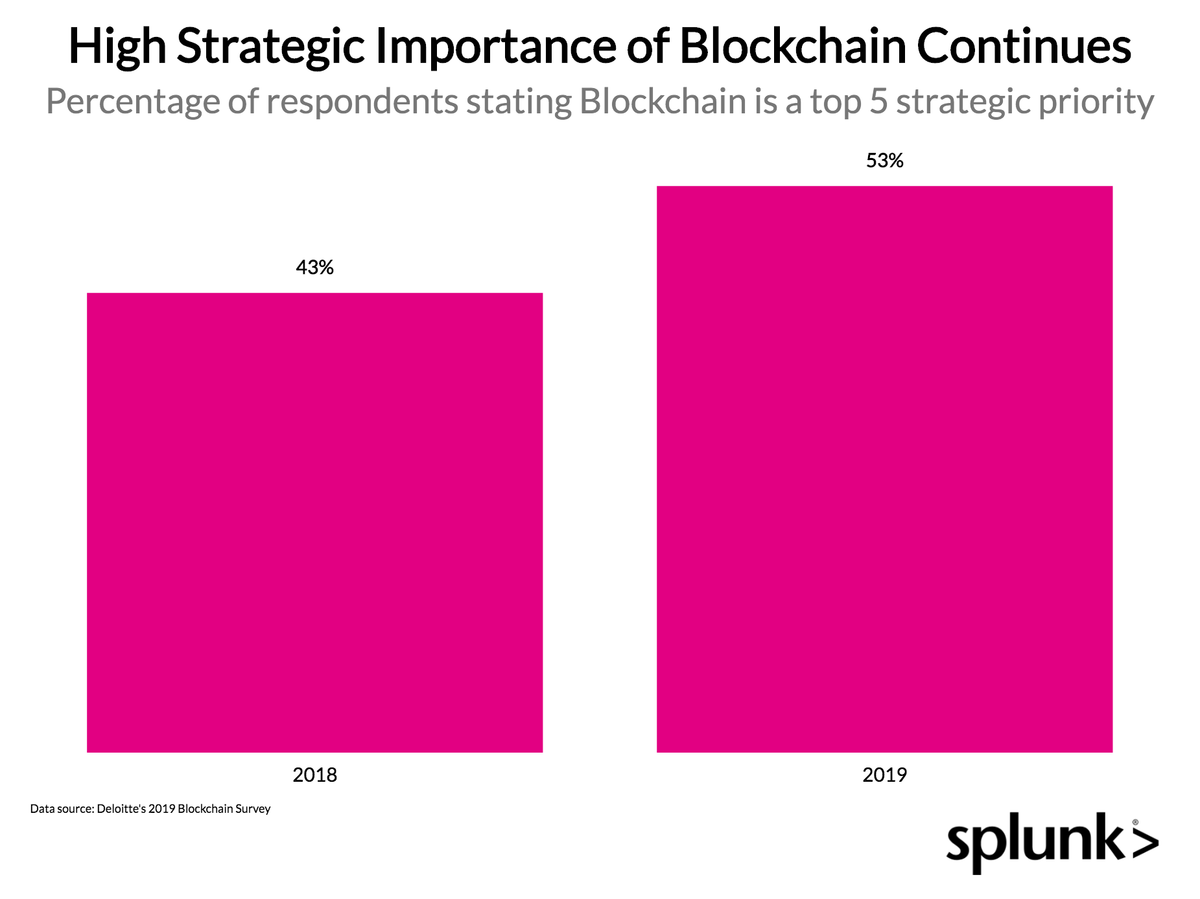 As the hype around blockchain simmers, executives continue to still rank it as an important strategic priority and are overall bullish on its technological scalability and business case:

Nearly twice as many executives feel blockchain has a compelling business case (83%) than think it is overhyped (43%).

Which industries can benefit most from embracing blockchain and where is it most feasible? A McKinsey analysis contends that in some industries blockchain can produce immediate financial benefits through cost savings or coordinating activity among “permissioned” partners. 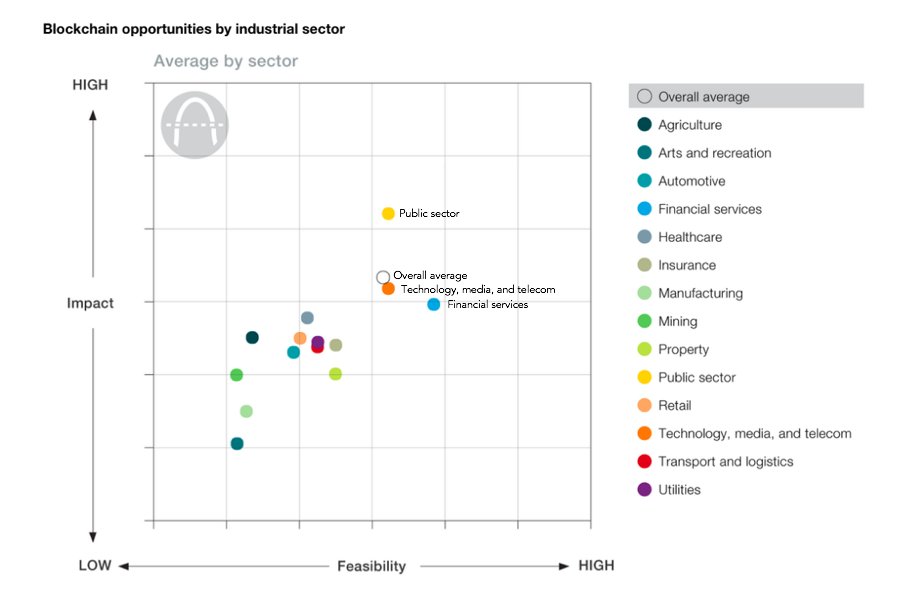 Chart via McKinsey with adaption

McKinsey ranks the public sector, technology/media/telecom, and financial services as the industries where blockchain can have a large impact and implementation is relatively feasible. These spaces tend to be decentralized and asset-light, making them perfect candidates for blockchain benefits.

On the other hand, a blockchain is a chain of proof of work that’s an immutable ledger of activity. Using the blockchain for data storage means storing this ledger of activity across all nodes in a network. While this can enable third parties to coordinate activity without trusting each other, this can come at a cost. The Bitcoin blockchain is currently well over 250GB for February 2020 and only growing.

As Jameela Omaar notes for the Interplanetary Database, a foundation dedicated to blockchain storage solution  “Many of the applications that have been proposed for blockchains — energy markets, music streaming services, IoT, and so on — will require storage of vast quantities of transactional information.” Further she notes that you need to store this data forever, and “forever isn't free.” As blockchain solutions enter the mainstream, the cost and complexity of managing its data will gain more prominence.

Blockchain may be the archetypal technology following the “hype cycle” espoused by the Gartner research firm. After a period of enormous media and investment excitement around blockchain technology, a more clear picture of the technology’s promise has emerged.

Blockchain won’t necessarily “change everything” and replace every industry behemoth with a decentralized network of owners, but that doesn’t mean it doesn’t have enormous potential. In the short term, enterprises can use blockchain for data sharing with partners through “permissioned networks” and ring out cost savings in some cases.

Nevertheless, industry executives remain committed to exploring blockchain and Bitcoin’s continued success means that we may only be at the beginning of the decentralized data revolution and all of its challenges and opportunities.

Splunk helps organizations worldwide turn data into doing. With solutions for IT, security, and business operations, Splunk empowers people to make faster, better decisions and take action on all kinds of data in real-time. To see more about the future of blockchain and data, check out Splunk Predictions 2020.